PARABLE OF THE DRAGNET

47 “Again, the kingdom of heaven is like a large net thrown into the sea. It collected every kind of fish, 48 and when it was full, they dragged it ashore, sat down, and gathered the good fish into containers, but threw out the worthless ones. 49 So it will be at the end of the age. The angels will go out, separate the evil people from the righteous, 50 and throw them into the blazing furnace. In that place there will be weeping and gnashing of teeth.

This is another parable of separation.  Fishermen worked together to cast a large net in the Sea of Galilee, then men at both ends would drag it to shore.  When the entire dragnet was out of the water, the bad fish were separated from the good ones. 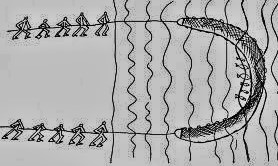 09.03.23.A. DRAGNET.  This net is 750 to 1,000 feet long, and with one end on the shore several fishermen in a boat take it out in the water about 300 feet and loop around and return to the shore in a semi-circular manner.  The net has floats along one edge and weights on the other edge that sinks along the bottom.  The ends are then pulled on shore until the entire net is out of the water and the fish are sorted. Google image.

The following is another parable of separation.  It is not about those outside of the church, but about those inside. Notice the list of characters:

Worthless fish             = Believers who accepted temptations by the evil one

The Greek term for dragnet is sagene (4522) and appears only once in the New Testament (Mt. 13:47).[1] The sagene net is a long net with each end attached to a boat.  The boats are maneuvered in a circular pattern toward the shore while the drag net literally sweeps the bottom of the sea (hence its name).[2]  It obviously captures everything within the encircled area.[3]

Homer, in his Odyssey (12:384-389), states that the slain suitors in the halls of Ulysses were like the fish on the shore caught by nets with a myriad of meshes, meaning dragnets.[4]  But this type of net also has a tendency to catch round river stones which are pulled unto shore along with the fish.  This is why Jesus asked, “If your son would want a fish, would you give him a stone?”  Yet related to this is the fact that the Jews lived according to kosher dietary rules described in Leviticus 11. The good fish collected in baskets were those with fins and scales, such as the fresh water sardine and musht (now called St. Peter’s fish). The undesirable fish was the catfish that had fins but no scales.

“Throw them into the blazing furnace … there will be weeping and gnashing of teeth.” Again Jesus used the judgmental language of John the Baptist, insisting that those who reject His message will be damned to an eternal hell. The subject of hell is mentioned more frequently in the New Testament than the subject of heaven.