27 Just then His disciples arrived, and they were amazed that He was talking with a woman. Yet no one said, “What do You want?” or “Why are You talking with her?”

28 Then the woman left her water jar, went into town, and told the men, 29 “Come, see a man who told me everything I ever did! Could this be the Messiah?” 30 They left the town and made their way to Him.

31 In the meantime the disciples kept urging Him, “Rabbi, eat something.”

33 The disciples said to one another, “Could someone have brought Him something to eat?”

34 “My food is to do the will of Him who sent Me and to finish His work,” Jesus told them. 35 “Don’t you say, ‘There are still four more months, then comes the harvest’? Listen to what I’m telling you: Open your eyes and look at the fields, for they are ready for harvest. 36 The reaper is already receiving pay and gathering fruit for eternal life, so the sower and reaper can rejoice together. 37 For in this case the saying is true: ‘One sows and another reaps.’ 38 I sent you to reap what you didn’t labor for; others have labored, and you have benefited from their labor.”

“My food is to do the will of Him who sent Me.”  Jesus made frequent mention of His dependence upon the Father.[1]

“Look at the fields, for they are ready for harvest.”  Jesus clearly connected agricultural imagery to “harvesting for the Kingdom of God.” In January and early February the crops were obviously not ready for harvesting – in fact, the barley seeds were not even planted yet.[2]  And the fields certainly were not literally white (see 02.03.02). But that was when Jesus came to the Samaritan Festival of Zimmuth Pesah when they wore white festal garments. In those days, the ethnicity of people was identified by their clothes, language, or accent. Those were markers that distinguished “them from us.”

The Jews had maxims of conduct that pertained to all areas of life. There was always a labor shortage when crops were harvested and placed in storage.  A rabbi said the following:

Rabbi Tarfon said: “The day is short and the task is great and the laborers are idle and the wages are abundant and the master of the house is urgent.”

Jesus had simply taken a well-known statement concerning the labor conditions of his agricultural community and applied it to the work of God. 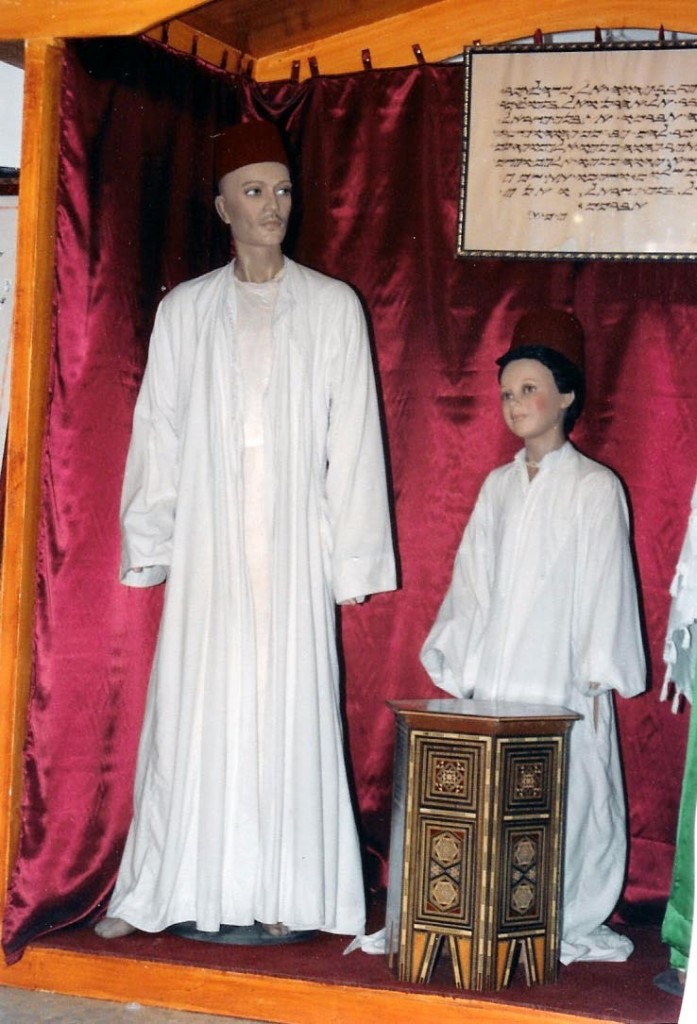 06.01.04.A  SAMARITAN MANNEQUINS IN WHITE COSTUMES. These traditional white costumes were worn by the Samaritans when they celebrated the Festival of Zimmuth Pesah — the Samaritan Passover which is about two months earlier than the Jewish one.  When Jesus said that the fields are ripe for harvest, just as crops lighten in color at harvest time, His words were a pun with an obvious double meaning. Photographed at the Samaritan Center in Shechem, Samaria, by the author.