News of the deaths of Julius Caesar in 44 B.C. and of Herod Antipater in 43 B.C. was too good for the Parthians to resist. It was a golden opportunity to expand westward. So under the leadership of General Pacorus I, five hundred Parthian horsemen soon appeared in Jerusalem and set up Antigonus as the Jewish Hasmonean king and priest. In doing so, he deposed his uncle Hyrcanus who was the Roman nominee.[1]  Antigonus was supported by the Parthian King Barzaphranes who desired access to the Mediterranean Sea and, like the Romans, considered Israel as strategic because it was the obvious land bridge to Egypt and Europe.  His constant battle with Hyrcanus and Phasael and their forces placed the entire land in civil war with daily skirmishes.[2]

In the meantime, John Hyrcanus II was deposed by his nephew Antigonus, the son of Aristobulus II, with the help of the Parthian army who came under the pretense to discuss peace with Hyrcanus and Phasael.[3]  When the Parthians arrived, the two men were captured.  Hyrcanus II was carried off to Parthia, and Phasael was placed in captivity where he committed suicide.

Phasael’s brother Herod, in the meantime, eluded the Parthians by escaping to Egypt, and then went on to Rome where he promised the emperor revenge on the Parthians, Samaritans, and Jews.  Since Rome was having its own difficulties in Europe and Carthage (in North Africa), they were more than delighted to have him bring the area under Roman domination. The Roman Senate gave him whatever military support he requested to remove the Parthians and crush the Jewish freedom fighters.

Roman peace at this time was being established throughout the empire although the Jewish enclave was obviously a continuous challenge.  The Romans had no desire to have their strength compromised by a Parthian threat,[4] and Josephus again carefully recorded the events.

Hyrcanus ruled, besides his first nine years (with his mother as queen), twenty-four years more, when Barzaphranes and Pacorus, the generals of the Parthians passed over the Euphrates and fought with Hyrcanus, and took him alive and made (his brother) Antigonus the son of Aristobulus king.

Into this political and social mess the Romans sent Herod (71-4 B.C.) who would later be given the title “the Great” for his architectural accomplishments. He was only 25 at the time of his appointment and the perfect candidate for the position. His brutality against various Jewish factions, as well as his family, would be remembered for generations. His rule originated with a decision by the Roman Senate in 40 B.C., who sent him back to the Holy Land with 30,000 infantry and 6,000 cavalry. It took him three and a half years of military struggles to acquire control of his kingdom. During this time (40-37 B.C.), he fought the Parthians as well as the freedom fighters. He used some of the most gruesome tactics known to the ancient world as he personally led his army into battle on ten different occasions.[5] He even acquired the assistance of the Samaritans which greatly increased Jewish-Samaritan tensions.

The Jews had no desire to be dominated by someone who was a descendant of Esau and an agent of Rome.  After many conflicts, his final battle was the siege of Jerusalem.  Josephus recorded the account.

Now the Jews that were enclosed within the walls of the city fought against Herod with great alacrity and zeal (for the whole nation was gathered together); they also gave out many prophecies about the temple, and many things agreeable to the people, as if God would deliver them out of the dangers they were in….

The first that scaled the walls were twenty chosen men (of Herod’s army); next were Sossius’ (Herod’s general) centurions; for the first wall was taken in forty days, the second in fifteen more, when some of the cloisters that were about the temple were burnt, which Herod gave out to have been burnt by Antigonus, in order to expose him to the hatred of the Jews. And when the outer court of the temple, and the lower city, were taken, the Jews fled into the inner court of the temple and into the upper city; but now fearing lest the Romans should hinder them from offering their daily sacrifices to God, they sent an ambassador, and desired that they would permit them to bring in beasts for sacrifices, which Herod granted, hoping they were going to yield; but when he saw that they did nothing of what he supposed, but bitterly opposed him, in order to preserve the Kingdom of Antigonus, he made an assault upon the city, and took it by; and now all the parts were full of those that were slain, by the rage of the Romans at the long duration of the siege, and by the zeal of the Jews that were on Herod’s side, who were not willing to leave one of their adversaries alive. So they murdered continually in the narrow streets and in the houses by crowds, and as they were flying to the temple for shelter, and there was no pity taken of either infants or the aged, nor did they spare so much as the weaker sex … but as if in the company of madmen, they fell upon persons of all ages, without distinction.

This destruction befell upon the city of Jerusalem when Marcus Agrippa and Caninius Callus were consuls at Rome, on the hundred and eighty-fifth Olympiad, on the third month, on the solemnity of the fast, as if a periodical revolution of calamities had returned since that which befell the Jews under Pompey; for the Jews were taken by him on the same day, and this was after twenty-seven years’ time.

Herod’s brutality was demonstrated when he fought both bandits and freedom fighters in the caves of Mount Arbel.  For years bandits attacked caravans along the famed Via Maris, the international highway that went from Egypt, through Capernaum, and on to Damascus.[6] They hid in mountain caves, especially in the caves of Mount Arbel from where they could see distant caravans coming toward them. 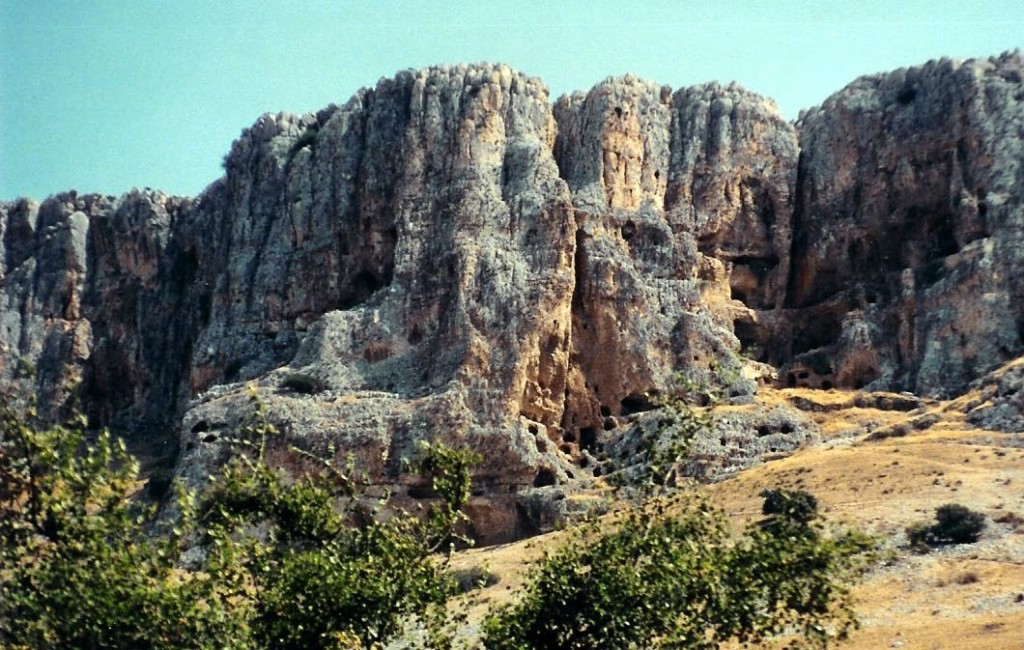 03.05.25.A. THE CAVES OF MOUNT ARBEL.  Mount Arbel is along the western side of the Sea of Galilee and has cliffs that are more than a thousand feet in height.  The cliff caves had been homes of freedom fighters and bandits for centuries, as armies could never capture the occupants until Herod the Great came to power.  Arbel is also along the road where Jesus walked whenever He traveled from Nazareth to Capernaum. In this area, He performed many miracles and taught the principles of the Kingdom of God. Photograph by the author.

Many freedom fighters and bandits hid in caves. To kill them, Herod built fires at the cave entrances depriving the occupants of oxygen and, consequently, they died.  However, when it was impossible to use that technique on the side of a cliff, he lowered soldiers in iron baskets from the top of the mountain.  As the baskets descended past the caves, the soldiers used long spears with hooks to impale their victims, pull them out of the shallow cave, and let them fall to the valley below.  To avoid this agonizing death, many simply jumped to their deaths rather than let the Romans enjoy a sense of victory.  The brutal nature of Herod was just what the Romans desired and he finally began to reign as a puppet king in 37 B.C.

Finally, it took three years for persistent military actions to defeat the Parthians, local bandits, and Jews. Therefore, one of the great lingering mysteries is why, in light of Parthian invasion and their constant threats, was Herod so incredibly complacent when the magi arrived to see Jesus. Yet He ruled for 33 years with absolute loyalty to Rome.