The Jewish population throughout the eastern Mediterranean area was so great that they permeated nearly every level of society.  While some were accepting of the Greek culture, others were strongly opposed to it. For others, changes toward Hellenism came slowly, and as long as these did not affect the Jewish faith, they did not care.  By definition, “Hellenistic reform”[1] was the expected compliance by everyone to the Greek culture, including the acceptance of Greek religious values.   And it was the subject of religious values that split the Jewish community.

The claim that the Maccabean Revolt was a revolt against Greek Hellenization is misleading and without historical evidence.[2]  The revolt was against the dictatorial monarch, Antiochus IV Epiphanes. The Hellenistic influence greatly affected the Jewish society and, were it not for the Revolt, there is little question that Hellenism would have had an even greater influence.  The revolt did, however, cause people to re-evaluate their faith, which in turn resulted in a spiritual revival. But the revival also caused divisions, and after the revolt ended, three major religious parties came into existence: the Pharisees, the Sadducees, and the Essenes. By the time of Christ, Hellenism caused an even wider theological division among the Jews.

The central core of Greek philosophy was that obtaining wisdom was the ideal goal of life. For this reason it has been suggested that philosophy is a false substitute for religion and it stems from the world of paganism which first gave rise to Plato and Aristotle.[3]

Wisdom hath been created before all things, and the understanding of prudence from everlasting.

The Greek gymnasium, theater, and temples were cultural symbols of Hellenistic reform. Except for the gymnasium that was constructed in Jerusalem by Antiochus IV, these Greek icons were not introduced into the Jewish cities until Herod the Great (reigned 37 – 4 B.C.). Many aspects of Jewish life took on the appearance of the Greek culture and were later promoted by the Romans.  For example, the Jews wore garments almost identical to the Greeks in Athens, Alexandria, and the Romans wore them in Rome.  Their clothing normally consisted of a tunic, cloak, belt, shoes or sandals, and a head covering for both men and women.  The headband was the sign of masculinity and never worn by women.[5] Some Jewish men did, however, maintain the tradition of wearing fringes to keep their identity (Num. 15).  The Greek custom of reclining at a dining table was precisely what Jesus and the disciples did during the Last Supper.  Cultural norms that did not have moral or religious implications were adopted almost universally.[6]

Hellenism had a number of positive and negative influences that are recognized in the New Testament.[7] Galatians 4:4 states that in the fullness of time, Jesus came to earth.  God had already been at work for centuries in shaping and preparing it to receive His Son. Some of these influences are as follows:

As previously stated, among the Greeks, the idea that a god might appear in human form was accepted in mythology.  Little wonder then, that when they heard that Jesus was God, they could accept this fact while the Jews had great difficulty with it. This belief, coupled with the expectation of a messianic figure, explains in part, as to why the Greeks laid their mythologies aside and accepted Jesus. Consequently, Christianity exploded in Gentile nations while it was slow to be accepted, and often opposed, in Jewish communities. The New Testament had to be written in Greek for these new believers. 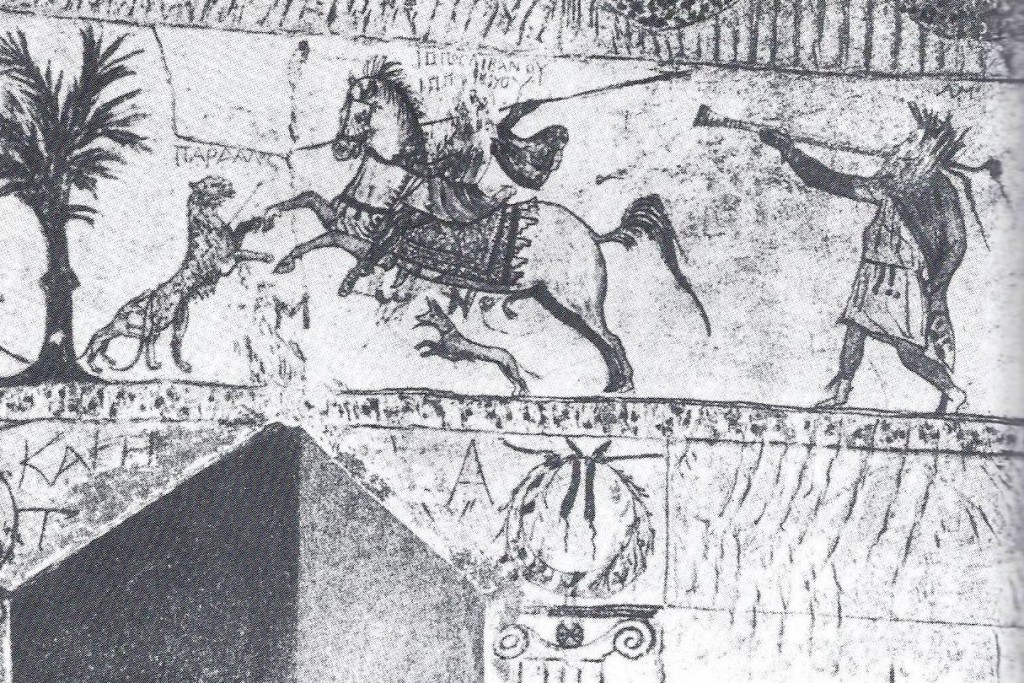 03.05.12.A. HELLENISTIC ART-FRESCO IN A JEWISH TOMB.  Evidence of Hellenistic cultural influence in Jerusalem is evident by this Jewish tomb-fresco showing a hunter, herald and lion. In traditional Judaism, the image of a person was banned, but such images became popular with Hellenism.

It was common for rabbis, theologians, and philosophers to have debates. In the year A.D. 248, Origen wrote a rebuttal entitled, Against (or Contra) Celsus. In it, Origen quoted this sarcastic attitude by Celsus concerning those who came to faith in Jesus:

The significance of this lies in the fact that Hellenism, with its focus on philosophy or rhetoric, alienated many people who then, became attracted to Christianity.

Finally, Hellenism also had its negative effects. The cultural and religious threats that challenged young Jews were,

As previously stated, the Maccabean Revolt began as a rebellion against the paganism of the Greek tyrants. The Essenes and orthodox Pharisees desired to rid their land of Greek influences, but their efforts were minimized by Jewish Hellenists as well as the number of foreigners in the land.[18] It is important to recognize that there were degrees and varieties of reactions against Hellenism, just as there were among those who embraced it. In the meantime, the Sadducees embraced Hellenism as much as they could without causing a popular revolt to have them removed. The Pharisees became entrenched in their Jewish ideologies while the Essenes distanced themselves from both the Sadducees and Pharisees.  In fact, all of the Jewish factions became polarized in their doctrines and practices. 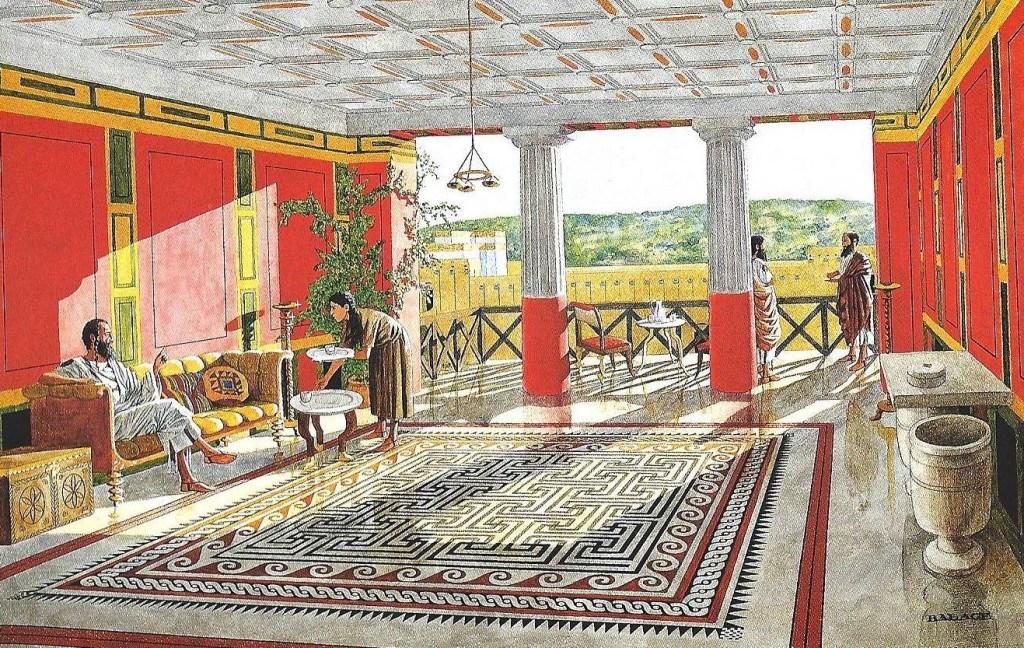 03.05.12.B. AN ILLUSTRATION OF THE HOME OF A SADDUCEE. An artist’s rendering of the home of a wealthy priest in Jerusalem. The Sadducees, who are descendants of the Hasmoneans (Maccabees), including Caiaphas and his family, enjoyed a luxurious life equal to kings and emperors. Their lifestyle was beyond the imagination of the common peasants.

[14]. As is explained elsewhere, the books of Matthew and Hebrews are believed to have been originally written in Hebrew.

[18]. Josephus, at times makes a passing comment on foreigners living in the land, such as their presence in Galilee. See Wars 3.3.2 (41).