Acts. 6 So when they had come together, they asked Him, “Lord, are You restoring the kingdom to Israel at this time?”

7 He said to them, “It is not for you to know times or periods that the Father has set by His own authority. 8 But you will receive power when the Holy Spirit has come on you, and you will be My witnesses in Jerusalem, in all Judea and Samaria, and to the ends of the earth.”

9 After He had said this, He was taken up as they were watching, and a cloud took Him out of their sight. 10 While He was going, they were gazing into heaven, and suddenly two men in white clothes stood by them. 11 They said, “Men of Galilee, why do you stand looking up into heaven? This Jesus, who has been taken from you into heaven, will come in the same way that you have seen Him going into heaven.”

Jesus and His disciples went to a high point on the Mount of Olives, where they had a brief discussion. His most important thoughts pertained to their future ministry, the coming Holy Spirit in a dynamic form, their faithfulness during persecutions, etc. He then lifted His hands and blessed them.  They had seen this blessing many times before in the temple, when the high priest would come out, stretch forth his hands, and bless the people.  Soon Jesus, the Ultimate High Priest, would do likewise and then ascend to His Father in heaven.

“Lord, are You restoring the kingdom to Israel at this time?”  This may be one of the most stunning questions in the Bible.  After all they had experienced, they still “didn’t quite get it” – they still misunderstood the purpose of His coming and sacrifice. They still believed Jesus would destroy the Roman Empire and establish a kingdom of international power and significance.  That was obviously not the goal of Jesus at this time, but it will occur when He returns for a thousand-year reign.

Within three decades of the crucifixion, the gospel of Jesus and His Kingdom of God was preached in every major city in the Roman Empire.  By the time the temple was destroyed, the message of salvation had gone to all nations within the empire. Persecution could not quench the movement but rather, it only fanned the flames of Christianity.  No Roman or demon could stop it.

“It is not for you to know times or periods.”  Acts 1:6-7 and Luke 17:22ff both agree that anticipation of the future is not to be the focus of life. Rather, believers are to do the will of God. In His divine wisdom and knowledge, Jesus predicted certain events that will occur, but these were stated to underscore the fact that He is very much aware of mankind’s plight and He is in control of all events. (Maybe it would be more correctly said that Jesus permits certain events to occur, because to say that He is in control suggests that He deliberately orchestrates harmful events.) Equally important is that Jesus did not deny the restoration of kingdom to Israel; that prophecy is waiting to be fulfilled.

“A cloud took Him out of their sight.”  This was most certainly not an ordinary rain cloud, but the Shekinah Glory of God.[1]   The word Shekinah or Shechinah means that which dwells.[2]  It was the same cloud of divine glory that led the Israelites as they wandered through the desert, appearing as a cloud during the day and as a pillar of fire at night. It was the same cloud that appeared to the shepherds, and later at the Transfiguration. It was God the Father to whom Jesus ascended.  It also confirmed that the Father was greatly pleased with the work and ministry of Jesus, hiding Him in His love.

At this point the ministry of Jesus changes radically.  All too often it is assumed that the ministry of Jesus was completed, but not so. Since the day of Ascension, the life of Jesus is one of continued ministry for His saints.  He stands before the throne of God, interceding for His believers who have been accused of various sins by the evil one. Because He functions in this role, as well as through His words and work on earth, believers have a direct link with God the Father, which is available only through Jesus (2 Tim. 2:5-6).  For nearly two thousand years this has been in His ministry.  He also has been preparing a place for His saints to live with Him in heaven. He is also waiting for His Father to tell Him to return to earth, where He will meet His saints in the air. From there He will take the saints to a great messianic banquet.  This will be followed by His return and His thousand year reign on the earth in which believers will participate with him.  At the end of this reign, the devil, his angels, and all those who rejected the call of Christ will be thrown into eternal hell (literally, the hell of fire)[3] forever.  Those who believed in Jesus and have kept their faith in Him, will live forever in heavenly glory with the One who is the Creator. The essence of the Gospel is Jesus; His birth, life, and death and victory over death, His ministry, His teaching, His miracles, Jesus is the divine act, the fulfillment of God’s redemptive purpose, the incarnation of the Kingdom of God.  This is the greatest love story ever told.

What sober-minded man, then, will not acknowledge that we are not atheists, worshiping as we do the Maker of this universe, and declaring, as we have been taught, that He has no need of streams of blood and libations and incense; whom we praise to the utmost of our power by the exercise of prayer and thanksgiving for all things wherewith we are supplied, as we have been taught that the only honor that is worthy of Him is not to consume by fire what He has brought into being for our sustenance, but to use it for ourselves and those who need, and with gratitude to Him to offer thanks by invocations and hymns for our creation and for all the  means of health, and for the various qualities of the different kinds of things, and for the changes of the seasons; and to present before Him petitions of our existing again in incorruption through faith in Him.  Our teacher of these things is Jesus Christ, who also was born for this purpose, and was crucified under Pontius Pilate, procurator of Judea, in the times of Tiberius Caesar; and that we may reasonably worship Him, having learned that He is the Son of the true God Himself, and holding Him in the second place, and the prophetic Spirit in the third, we will prove.  For they proclaim our madness to consist in this, that we give to a crucified man a place second to the unchangeable and eternal God, the Creator of all; for they do not discern the mystery that is herein, to which, as we make it plain to you, we pray you to give heed.

“This Jesus … will come in the same way that you have seen Him going into heaven. “Jesus lived His life as an orthodox Jew, something modern Christians can hardly imagine. He ministered as a Jewish rabbi, was crucified, arose, and continued to minister as a Jewish rabbi for forty days until His ascension. When He returns, He will do so in dynamic power and glory, and as a Jewish rabbi.

This promise of His return led the first century Church to pray a short prayer in the Aramaic: Maranatha meaning Our Lord come.  It was included in Paul’s first letter to the Corinthians (16:22) and a similar prayer was used by John when he closed his book with “Come, Lord Jesus” (Rev. 22:20).[5]

There are two documents from the early Church fathers that reflect upon the place from which Jesus ascended.  Bishop Eusebius of Caesarea in the year 312 said this.

Eusebius, Demonstrations of the Gospel  6:18

The emperor’s mother ordered a holy church to be built on the top of the entire hill, and there a prayer house in honor of the Redeemer, who stayed there and where, as it is handed down by a credible report, he, in that same grotto, let his disciples into the unfathomable secrets.

The Pilgrim of Bordeaux (A.D. 333) and Dame Egeria (384) both celebrated liturgy there.[6]  It has been destroyed and rebuilt several times, and today it is known as the Convent of Carmelite Nuns. However, another site claims to hold the rock from which Jesus ascended.  It is but a small prayer house that was converted into a mosque (see below).[7] 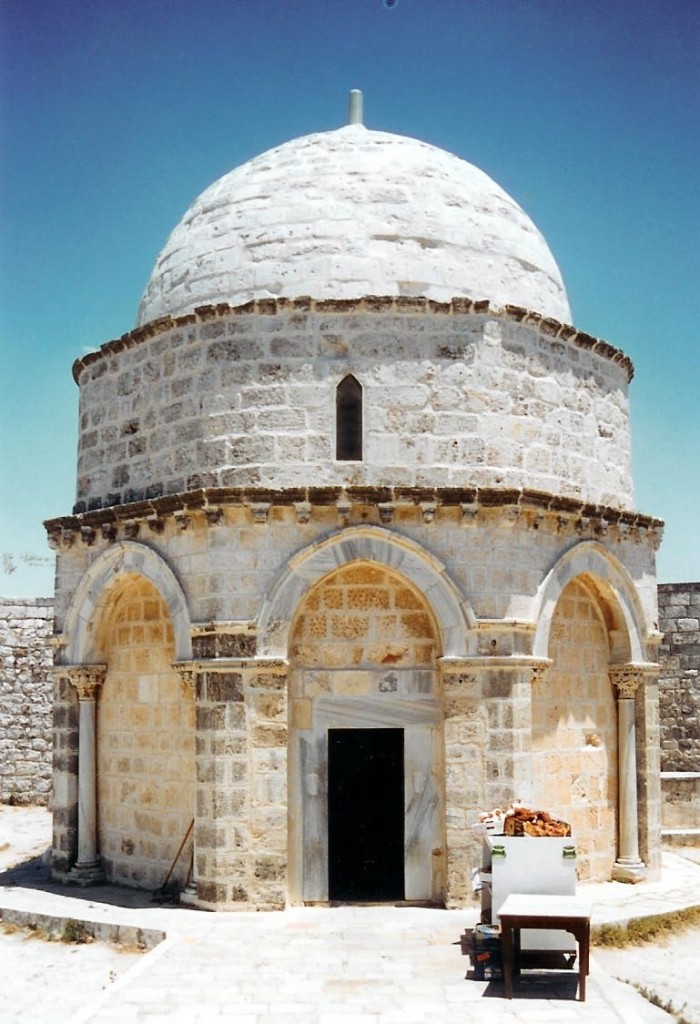 18.02.03.A. THE MOSQUE OF THE ASCENSION.  The traditional place from which Jesus ascended was once a church, but is now a mosque. The small building was constructed in 187 by Pomenia and reconstructed by Constantine in the year 326. It was transformed into a mosque in 1187 by Salah Ed Din because Muslims consider Jesus to be one of their prophets.  Foot impressions on the stone inside are said to be the footprints of Christ.[8] Photograph by the author.

[4]. Elwell and Yarbrough, Readings from the First-Century World. 126.  The title of Pontius Pilate was always thought to be procurator because some early church fathers referred to him with that title.. However, an inscription was discovered in Caesarea that has his title as “Prefectus Judaea.” See 16.01.06.B.