Lk. 29 As He approached Bethpage and Bethany, at the place called the Mount of Olives, He sent two of the disciples 30 and said, “Go into the village ahead of you. As you enter it, you will find a young donkey tied there, on which no one has ever sat. Untie it and bring it here. 31 If anyone asks you, ‘Why are you untying it?’ say this: ‘The Lord needs it.’ ”

Mt. 4 This took place so that what was spoken through the prophet might be fulfilled:

6 The disciples went and did just as Jesus directed them. 7 They brought the donkey and the colt; then they laid their robes on them, and He sat on them.

Mk. 4 So they went and found a young donkey outside in the street, tied by a door. They untied it, 5 and some of those standing there said to them, “What are you doing, untying the donkey?” 6 They answered them just as Jesus had said, so they let them go. 7 Then they brought the donkey to Jesus and threw their robes on it, and He sat on it.

It is amazing that Jesus and so many other people traveled through the three villages that were located east of the Jerusalem, because the Temple Scrolls identify these as leper colonies.[1] Evidently these lepers had the type of leprosy that was a skin condition and not the “full blown” disease which caused limbs to decay and fall off. It was believed that the disease was a wind borne illness and since the prevailing wind came from the west, the Mount of Olives was a safe place for the lepers to live. It has been suggested that lepers were assigned to the crest of this hill because in 63 B.C. General Pompey defiled the hill by establishing his camp upon it. Since then it had a second name – the Hill of Offense.[2]

While anyone with a physical infirmity was not permitted to enter into the inner temple, from the top of the mount, those with a disease or handicap were high enough that they could barely see over the city walls and observe the events within the temple courts. It was the Hebraic way of saying that one day they would be in the heavenly temple courts.

By choosing to ride a colt into Jerusalem, Jesus identified Himself with a messianic symbol that everyone recognized. His ride was a clear and profound announcement that He proclaimed Himself to be Israel’s Messiah. Throughout history there had been kingly entrances gloriously described by ancient writers, but the triumphal entry is the only one that is a prophetic fulfillment. No wonder the religious leaders were shocked and furious.

It was only a few weeks earlier when Jesus and His disciples were in northern Israel at the cultic shrine of Pan, where He asked them, “Who do people say that I am?”  To this Peter’s response was, “You are the Christ, the Son of the Living God!”  Similar imagery now played out at the Triumphal Entry as the people believed Jesus was some type of Figure sent by God to deliver them from oppression. Jesus entered Jerusalem as if to silently ask, “Who do you people say that I am?”  Their response was correspondingly correct when they, in effect, said, “You are the king who comes in the name of the Lord!”  The common people were sufficiently educated in their Scriptures to understand the symbolic language of the donkey and Who was on it. 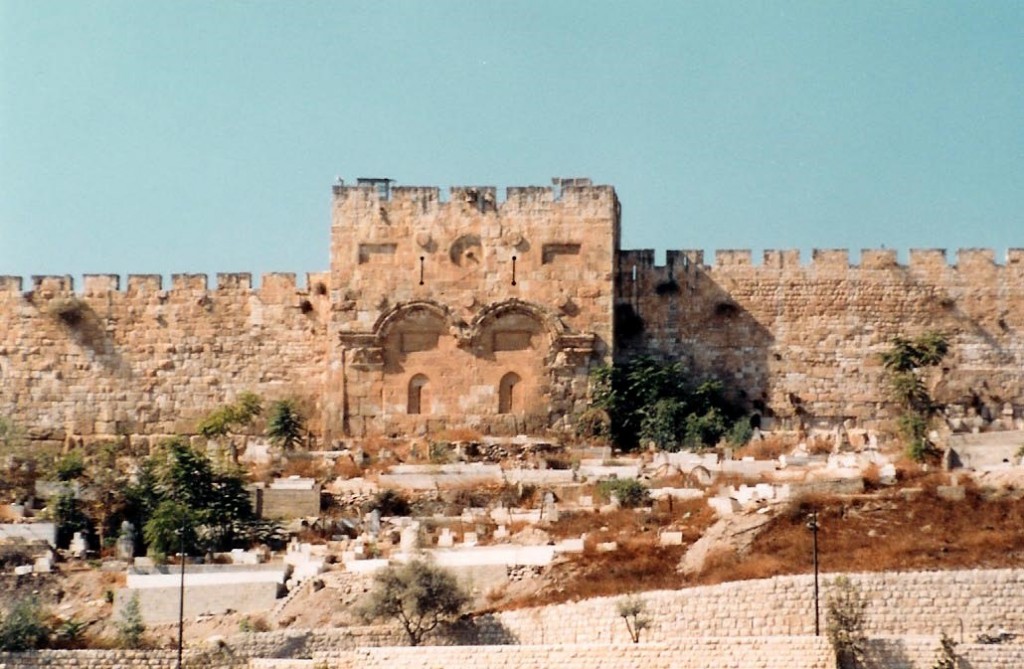 13.01.02.A. THE EASTERN (GOLDEN) GATE OF JERUSALEM.  The Eastern Gate seen today was rebuilt by Suleiman the Magnificent in 1538 and stands upon the original gate where Jesus made His triumphal entry.  Suleiman, however, eventually learned that Christians believed that their Messiah would one day ride through it.  In response, he closed it and placed a cemetery in front of it believing that the Messiah would not defile Himself by going over it.[3] Photograph by the author.

The statement, “You will find a young donkey,” is a classic example of an angaria – the custom of a temporary procurement of resources for the benefit of a leader, ruler, or rabbi.[4]  That is why Jesus said, “The Lord needs it.” That statement let the owner know his donkey was not being stolen, but it was the custom of angaria.  This custom is unknown in Western culture today. But Jesus needed a donkey for symbolic reasons as this imagery connected Him with Hebrew prophecies. While during the Inter-Testamental period and at the time of Jesus, kings rode horses, centuries earlier in Jewish history, they rode donkeys.[5]  The horse was symbolic of war, whereas the donkey was symbolic of peace – two images that were well established in biblical times. Note the following examples:

Prophetic Scriptures such as Genesis 49:10, Isaiah 62:11, and Zechariah 9:9 portrayed a vivid image of a messianic king riding into Jerusalem on a donkey, not a horse. Therefore, Jesus fulfilled the image the rabbis told people concerning the messianic miracles and other prophecies in their Hebrew Bible.  He could not have ridden a horse, as that would have been symbolic of a military victor.[6]  Jesus never endorsed, nor opposed, the nationalistic fever by word or by deed. The donkey was a symbol of peace and servanthood.[7]  Men do not fear those whose mission is peace, but they fear men of war. At issue here was the conflict between belief and unbelief, light and darkness, death and resurrection into new life.  If there was ever a symbol to show that Jesus was not going to overthrow the Romans, the donkey was that symbol.  Yet the thousands of people cheering and welcoming Him into the city were worrisome for Jewish leaders.  Ironically, there is no record that the Romans were concerned although they were always on full alert.

To have ridden a trained beast of burden would have meant that Jesus was on a “used” or “second hand” animal. It is a fundamental rule of worship that all that is ever given or used to honor God is to be pure and holy, never having been used for anything else previously. Animals used for religious service, likewise, had to be pure, holy, and never used previously.[8] Therefore, Jesus had to ride a colt that was never ridden. Another example of this purity law is the brand new tomb in which Jesus was laid – it had not even become anyone’s family tomb.

The phrase, “on which no one has ever sat” is significant for another reason: To sit on a donkey is to ride it, and this was another miracle as Jesus demonstrated He had power and dominion over nature.  Anyone who mounts a donkey, horse, or any other animal for the first time will be thrown off because all domesticated animals need to be trained to accept a rider.  For an untrained donkey to accept a rider, especially when she had her young foal, was definitely miraculous. What Jesus did was clearly against all laws of nature.

Matthew, who wrote to a Jewish audience, made it a point to report that when Jesus rode a donkey into Jerusalem He was fulfilling the prophecy of Zechariah 9:9. He also said that Jesus told His disciples to bring them (Mt. 21:2) and restated the plurality in the following verse when He said our Lord needs them, obviously meaning both the donkey and her colt.[9] Matthew perhaps recorded the presence of the colt, as it was too young to be taken from the mother. This would emphasize the uniqueness of Jesus riding upon it.  Mark and Luke reported only one donkey, which was the focus of each writer.

In this scene, the issue of “Was it one or two?” reappears. In another passage is the issue of whether there were one or two blind men by Jericho, one or two Jerichos (12.04.05.Q1), or one or two demoniacs on the eastern shore by Gadara (08.06.03.Q4).  If there were two, then obviously there had to be one. But if the focus of discussion is on one, then the second person, place, or thing is out of the discussion – mentioned only that it existed.

The imagery of a donkey continued to be a challenge for the Jewish people. A passage in the Talmud recorded similar imagery with an interesting prophetic twist of the messiah riding a white horse. Note the phrase “if they are meritorious” (below)  reflects the common thinking of the day that the messiah will come only after the Jews cleanse themselves and live pure and holy lives.  Jesus came because it is impossible for humanity to present itself pure and holy before God; hence, He paid the price of sin with His life.

The Talmud reflects the common thinking that the Jewish people wanted a Messiah who would give them political freedom as reflected by the comment of the white horse – a victorious military animal. This opinion continued centuries later when the Talmud was written. In contrast, notice the powerful symbolism of His entry:

It is understandable that the religious leaders were nearly paranoid.  No wonder they came to Jesus and asked Him to calm the crowd (Lk. 19:39-40; Jn. 12:19).  It was a most unusual request in light of the many times they criticized Him.

While Matthew’s focus was to report the fulfillment of biblical prophecy to a Jewish audience who knew the Old Testament prophecies, Mark and Luke wrote to Gentile audiences who had little or no knowledge of Hebrew prophecies. Therefore, the second and third evangelists would not have reported this information.  They did, however, report that the donkey had never been ridden and the animal was completely submissive to Jesus. Everyone understood this was against all laws of nature; clearly a miracle!

“Daughter Zion … your king comes to you.”  The phrase “Daughter Zion” or “Daughter of Zion” is a personification of Mount Zion, which was that part of Jerusalem. It represents Jerusalem and all of its inhabitants. However, at times the phrase “daughter” can refer to the villages that surround the Jerusalem such as Bethlehem.  In this case, Jesus combined these two phrases from two verses from the Hebrew Bible: Isaiah 62:11 and Zechariah 9:9. Note the following,

11  Look, the LORD has proclaimed

to the ends of the earth,

Look, your salvation is coming,

His reward is with him,

and His gifts accompany Him.’”

A unique feature of this passage is Isaiah’s word for salvation. It is Yesha, and is identical to the Hebrew name of Jesus, that is Yeshua, except that the latter has the optional letter vav.[11]  Furthermore, the word Yesha does more than imply a person, it implies Deity. Jesus connected portions of Isaiah’s passage with portions of Zechariah 9:9,

Look, your King is coming to you;

He is righteous and victorious,

humble and riding on a donkey,

the foal of a donkey.

The implication is that God, the salvation of Israel, and the expected Messiah, are all one embodied in Jesus of Nazareth. By reflecting upon Isaiah and Zechariah, Jesus implies that there is still work ahead of Him, and that is His return.

[1]. Among the Dead Sea Scrolls were found some scrolls known as the Temple Scrolls. The reference to the three villages as leper colonies is found on column 46, lines 16-18.

[10]. A Jewish king outside of Judea who struggled against the Romans.