While the reign of Alexandra Salome was one of great political wisdom and religious obedience, she failed to train her sons in her ways.  Upon her death, she confirmed the position of high priest to John Hyrcanus II and placed Aristobulus II in the position of king. The two brothers would probably have functioned well together, and the Jewish kingdom would have enjoyed peace and prosperity if a descendant of Esau by the name of Antipater had never come. But he did.

Antipater, the father of Herod the Great, saw a golden opportunity to cause chaos and thereby, attain for himself power and wealth. Antipater was the son of a powerful governor of Idumea (of what is southern Israel today) who had amassed great power and wealth after the Maccabean Revolt. During the time of prosperity and peace, the governor and his son taxed caravans that passed through their territory, especially along the famed spice route that was between the Dead Sea and the modern Israeli city of Eilat. Antipater instructed his son Herod how to manipulate the political affairs of both the Romans and Parthians.[1] Unfortunately, he taught him very well.

Concerning the Hasmonean brothers, Antipater circulated rumors about Aristobulus and Hyrcanus causing strife within the royal family. Soon Aristobulus revolted against his older brother and announced that he was both high priest and king of Judah.  Civil war broke but neither felt strong enough to win a victory. So Aristobulus, with the support of the Sanhedrin, went east and attempted to secure military strength from the expanding Parthian Empire,[2]  while Hyrcanus went west and secured the same from the Romans.[3] Soon Israel would become the frontier land between two competing world empires, the Romans and Parthians.  Josephus recorded the events:

And when Alexander had been both king and high priest twenty-seven years, he departed this life and permitted his wife Alexandra to appoint him that should be high priest; so she gave the high priesthood to Hyrcanus, but retained the kingdom herself nine years and then departed this life.  The life duration [and no longer] did her son Hyrcanus enjoy the high priesthood; for after her death his brother Aristobulus fought against him, and beat him, and deprived him of this principality and he did himself both reign and perform the office of high priest to God.  But when he had reigned three years and as many months, Pompey came upon him, and not only took the city of Jerusalem by force, but put him and his children in bonds and sent them to Rome.  He also restored the high priesthood to Hyrcanus and made him governor of the nation, but forbade him to wear a diadem.

The significance of Israel being at the frontier between two rival empires cannot be overstated. While the Jewish people were subjects of Rome, they were also on the eastern frontier facing the Parthians. This strategic location was the cause of considerable political tension and anxiety.

In the meantime, the Jews were inundated with Hellenism not only by the Greeks, but also by their leaders.  For example, their high priest John Hycranus II minted coins with a double cornucopia (horn of plenty), a symbol taken from Greek mythology. In Greek mythology, the cornucopia was said to involve the birth and nurturance of the infant god Zeus. According to the myth, Zeus was protected by a goat that functioned as a nurturing goddess, but accidently broke off one of her horns while feeding the infant milk.  Hence, the horn has become known today as the “horn of plenty.” 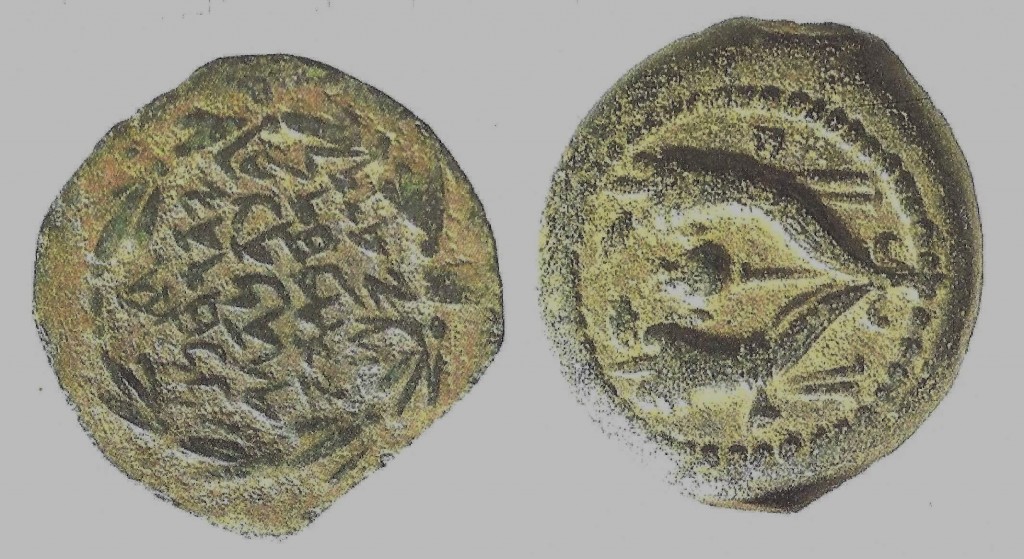 03.05.13.A. COIN OF JOHN HYCRANUS II. This coin of John Hyrcanus II, the high priest (63-40 BC) has the name Jehohanan on one side (left) and a double cornucopia (right) taken from Greek mythology on the reverse side.

As was mentioned previously, after the Maccabean Revolt, international trade increased significantly.  Products arrived from foreign ports by ships and caravans.  The Greek merchants who did business in the capitol city of Jerusalem appreciated Hycranus (priest 76-67 B.C.) so much, that Josephus said that they set up a bronze statue of him in the temple of Demus in Athens.[5] Obviously Hellenism was a powerful influence in the Jewish nation. The only way the religious leaders could combat the cultural tidal wave and preserve their faith, was to expand hundreds of legalistic regulations. Unfortunately, these regulations of Oral Laws resulted in the death of biblical Judaism and the creation of rabbinic Judaism. Decades later when Jesus came, he confronted those legalistic attitudes and regulations.

If Hollywood wanted to produce a movie with action, drama, scandalous sex, loyalty, treason, assassinations, and war, they would have no further to look than at the Inter-Testamental Period between the reign of Antiochus Epiphanes and the death of Herod the Great. Plots and events change so frequently that at times the historical timeline is difficult to follow. Were it not for a few historians like Josephus, this part of history would have been lost. For Jesus to come and preach His Sermon on the Mount and various messages on peace and a kingdom of God was a feat that astonished both the listeners and the Romans. But His birth was still six decades into the future.