John Hyrcanus ruled Israel/Judaea (the provinces of Galilee, Judea, Samaria, Perea, and Idumea) [1] and desired to “purify” the Jewish state of foreign influences.  He no sooner took control when he was threatened by an invasion of a new Syrian ruler who besieged Jerusalem and almost captured it by starving the people to death. A treaty was finally agreed to that included a sum of money that was paid to Damascus. Shortly thereafter, the king was killed and Hyrcanus had no problems with the Syrian Greeks again.

He now could concentrate on making the Holy Land a holy land, or at least as he believed it should be. His goal was to either exterminate or drive out non-Jewish religions and their influences. He pursued and killed remnants of the Seleucid dynasty, unless they converted to Judaism which included circumcision.  In 128 B.C. he captured the two principal cities of Samaria and Shechem, and destroyed the Samaritan temple.[2] Whatever was left or rebuilt was destroyed by his two sons, Aristobulus and Antigonus in 108-107 BC, who also sold hundreds, if not thousands, into slavery.[3]

Archaeologists have uncovered the burn-layer of the temple ruins, along with arrowheads, swords, daggers as well as stone and lead balls once used as missiles thrown by shepherd’s slings.[4]  Since the Samaritans were weak at this time, they could offer no effective opposition.

Hyrcanus extended Jewish rule east of the Jordan River and as far south as Edom, which included the ancient city of Petra, and forced conversions and circumcisions of the Idumeans. The Jews, however, never recognized the conversions of these people.  These descendants of Esau also lived in the Negev Desert. They chose “conversion” as an alternative to death or moving out of the area.  Hyrcanus expanded the Jewish domination but not to the Decapolis cities. While he was primarily a military ruler, he constructed a citadel fortress beside the temple,[5] which was later remodeled by Herod the Great who renamed it the “Tower of Antonia,” a/k/a the “Antonio Fortress.”[6] Hyrcanus functioned as king (a title he never claimed), priest, and prophet, and near the end of his reign, he left the party of Pharisees and joined the Sadducees.[7]

During reigns of Hyrcanus, and later his son Alexander Jannaeus, there was a strong migration of Jews from Babylon and Persia to their homeland.  News of the victorious Maccabees and the “purification” traveled quickly to the Babylonian and Parthian provinces.  Since many were anticipating a messiah, they returned to the land God had promised them.[8] Those who relocated to the Galilee area, had a dialect accent distinctively different from those who had a longer heritage in Jerusalem. For that reason, during the trials of Jesus, those standing near Peter said to him, “Surely you are one of them, for you are a Galilean” (Mk. 14:70), because “your accent gives you away” (Mt. 26:73).

Hyrcanus and his militants again attacked the Samaritans, this time devastating the city of Shechem. He maintained absolute control over all aspects of Jewish life, including the temple. To reduce the possibilities of any challengers arising in the temple, he took the robes of the high priest when not in use, and kept them in storage. They were given to the high priest the week prior to the Day of Atonement and returned the day after. This tradition continued throughout the reign of Herod the Great and the Romans. The symbolism concerning the control of the high priestly robes cannot be overstated. In fact, years later, Vitellius, who was the last governor of Syria under Emperor Tiberius, received special permission from the emperor that the high priest could keep his robes permanently.[9]

Casual reading of John Hyrcanus would leave the impression that he was passionate about eradicating the Greek culture from Israel.  But it appears that he simply desired to secure his power. The fact that he struck coins with Hebrew and Greek imagery is indicative that elements of the Greek culture had been accepted by leaders in the highest positions.  On the coin below, the script reads from right to left: WHY NN (HUH) = Yehohnan; H= The; KHN = Priest; H = The; GDL = High; W= and; (HUH) BR = Council; H= The; YHDM=  Jews.[10] While the coins identified him a high priest, he also functioned as king 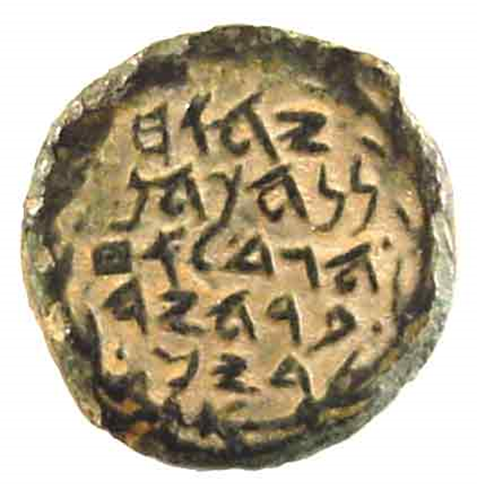 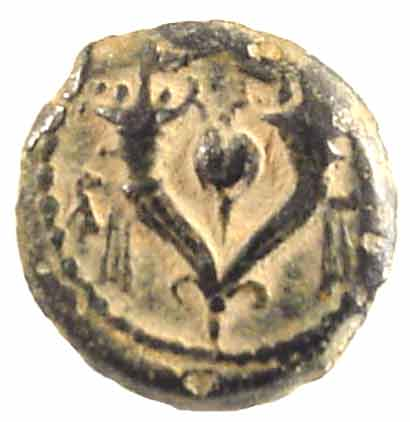 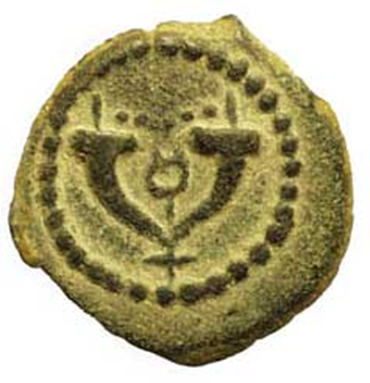 03.05.07.A. JEWISH COINS WITH GREEK MOTIFS. The First Jewish Coin (left and center) was minted by John Hyrcanus I (Yehohanan) from 130 to 104 B.C. It has the ancient paleo-Hebrew inscription that reads, “Yehohanan the High Priest and the Council of the Jews” surrounded by a wreath. The reverse shows a Greek double cornucopia adorned with ribbons, pomegranate between horns, and a border of dots. RIGHT: Years later Herod the Great minted coins with a double cornucopia and caduceus in the center. SOURCE:  http://www.mefacts.com/cached.asp?x_id=10080

This matter is important, because scholars often underestimate the influence, even presence, of Hellenism in Jewish life during the days of Jesus. When Hyrcanus died in 104 B.C., he willed that his wife take the throne, but his son Aristobulus starved his mother to death,[11]  killed his brother, and took control of the Jewish throne.[12]

[1]. Some ancient writers use the term “Judea” in the broadest sense. Examples are found in Pliny the Elder, Natural History, 5.15.70; Strabo, Geographia, 16.4.21; and Dio Sassius, Roman History, 37.15.2. In the days of Jesus, Perea was often referred to as the “region of Judea across the Jordan.”