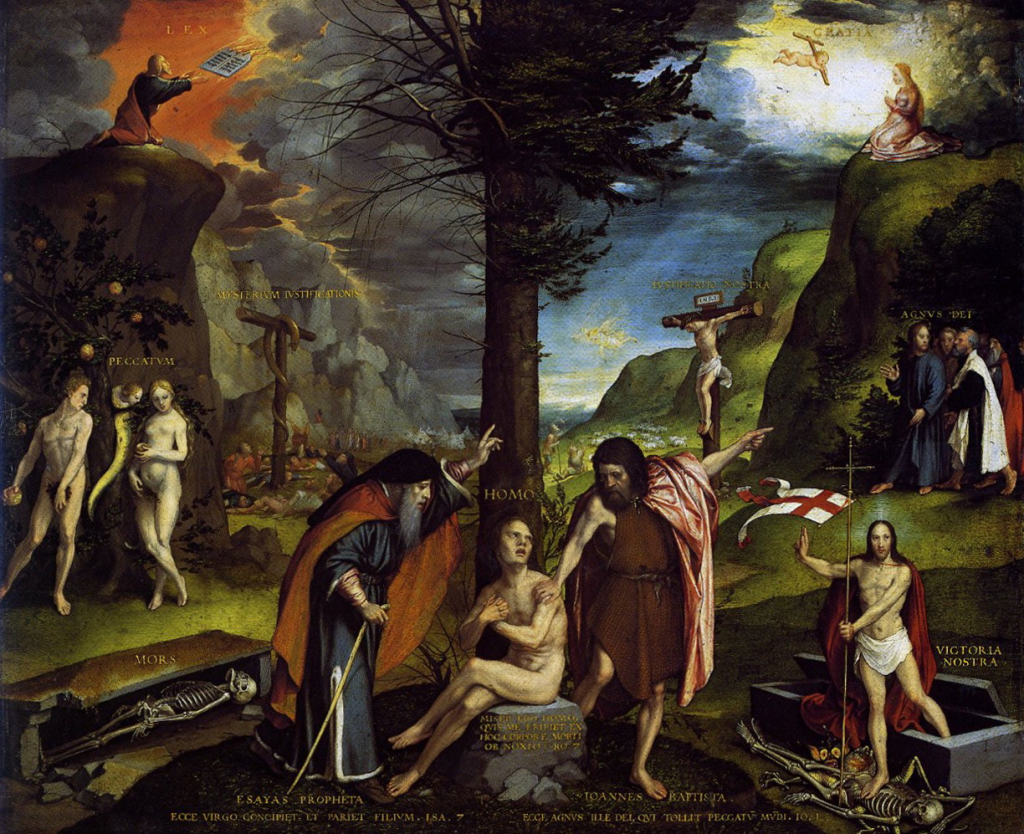 18.03.00.A. SUMMARY OF THE BIBLE by Hans Holbin. This picture shows the themes such as Creation and Moses of the Old Testament on the left, and the plan of salvation and the sacrifice of Jesus on the right. The tree in the center has dead branches on the left depicting the Old Testament era, whereas the right side of the New Testament era is healthy and strong. This reflects typical theology of the 16th century Europe.

Jesus never intended to be the founder of a new religious faith.  He came to redeem His people from the curse of sin that always leads to death.  The authenticity of His life was realized by the fulfillment of hundreds of Old Testament prophecies.  The hope of the Jewish people was now reality (Acts 2:16; 3:18, 24; 10:43).  He became exalted as Lord, not by His death, but by His resurrection from death (Acts 2:33-36; 3:13; 4:11).  He was aware, however, because of the Jewish rejection of the fulfillment of the Old Testament, a new faith would be developed.  To those who placed their faith and hope in Him, Jesus gave the Holy Spirit as a Comforter and His Presence (Acts 2:17-22, 32, 44). He shall return as reigning judge and Savior (Acts 3:20 ff.; 10:42; 17:31), but in the meantime there is a daily appeal to lost souls to come to repentance and to live godly lives, filled with His Presence in the form of the Holy Spirit (Acts 2:38; 3:19; 10:43).

Unfortunately, church history is riddled with countless accounts of those who failed to follow the divine directives of Jesus and His apostles.  Yet, buried between these pages of history, is occasional evidence of believers who lived holy lives that gave testimony of being true Christians in their villages and communities. For example, in the ancient city of Hebron Jews and Christians were buried in the same cemetery until the 6th century.  This indicates, clearly, that the Jews did not consider the Christians outside of the Jewish faith, as in other parts of the world. The believers of Hebron saw Jesus as a fulfillment of the Hebrew Bible, not a replacement of it.

Jesus always spoke with compassion to those who came to Him to hear, to learn, or to be healed.  He spoke of Scripture as revelation that was self-authenticating, rather than a legal code to be feared or used as a weapon.  His words to his opponents were frequently sarcastic and condemning. He never overloaded His audience with philosophy, theology, or excessive words.  In fact, He trusted His followers, such as the Apostle Paul, to put together His ideas, theology, ethics and guidelines for the believer and the church.

The word pictures and the compassion Jesus had, speak volumes.  His longest sermon, the Sermon on the Mount, can be delivered in about fifteen minutes.  His longest monolog (Lk. 15) can be dramatically delivered in ten minutes.  His sermons crossed all social lines of his world.  He conveyed the Kingdom of God through pictures of daily life.  In some manner, all of His listeners understood they had missed the mark and that the Grace of God was available for them.  This is especially noteworthy in Luke 15.

One of the problems encountered with this study was where to delineate the limits of research.  The teaching techniques are different from the figures of speech, which were eventually written in various literary forms.  This delineation is hardly distinctive and, is therefore, subjective for every student.

The primary objective of Jesus was to bring the Kingdom of God to humanity.  He underscored the words of the Old Testament prophets.  He brought salvation and healing to an oppressed people and taught them to live in covenant with God. As such, he used the objects of daily life to convey the

deep and merciful truths of God.

18.03.00.B.  COIN WITH THE IMAGE OF “CHRISTOS.” A rare, sixth century lead seal depicting Jesus, was recently discovered in excavations by the Antiquities Authority in the Old City of Tiberius. The other side of the seal has a cross with an abbreviation of the name “Christos.” [1]

According to the report in Ynet News, this is the first time a seal with the image of Jesus has been discovered in excavations in Tiberius, the only site in Israel where coins have been found. A number of similar seals have been found in Caesarea, the ancient capital of the province.

Professor Yizhar Hirschfeld of the Hebrew University, who was in charge of the dig, notes that the seal shows an important church official. “The church here was stronger than we thought. This also shows that Judaism and Christianity met here and lived together in harmony,” he says.

Then for three years He was an itinerant preacher.  He never had a family or owned a home.  He never set foot inside a big city.  He never traveled more than two hundred miles from the place where He was born.  He never wrote a book or held an office.  He did none of the things that usually accompany greatness.

While He was still a young man, the tide of popular opinion turned against Him.  His friends deserted Him.  He was turned over to His enemies and went through the mockery of a trial.  He was nailed to a cross between two thieves.  While He was dying, His executioners gambled for the only piece of property He had, His coat.  When He was dead, He was taken down and laid in a borrowed grave.

18.03.01.V Some Concluding Thoughts. After thousands of hours of study in more than 18 years, Dr. Bill Heinrich presents some inspiring closing thoughts with a little help by some very special young scholars.

Jesus didn’t just come to save sinners, but to save then and transform them into His beautiful image. That image is His character, His personality, and all that He is. Everything else is detail.