23 When the soldiers crucified Jesus, they took His clothes and divided them into four parts, a part for each soldier. They also took the tunic, which was seamless, woven in one piece from the top.

24 So they said to one another, “Let’s not tear it, but cast lots for it, to see who gets it.” They did this to fulfill the Scripture that says:

“They divided My clothes among themselves, and they cast lots for My clothing” (Psalm 22:18).

And this is what the soldiers did.

A typical Jewish person wore five pieces of apparel.[1]  These were

“They took His clothes.” Crucifixion was the ultimate shame, not only because of the social stigma, but also because every piece of clothing was removed from His body. Jesus normally wore a prayer shawl that had strings or fringes,[2] and was probably taken from Him during the Jewish trials. Under the tallith was a larger and more expensive robe known as the tunic or cetoneth.[3] Garments taken were,

Roman soldiers regularly gambled for the clothes of those who were crucified. Since garments were expensive, there was a premium on the under garments, outer garments, upper garment, and sandals. As a courtesy, Christian art shows Jesus on the cross with a loin cloth.  However, a vast majority of persons were crucified completely naked as this was the highest order of shame that could be bestowed upon anyone.  Only in rare cases, as recorded in Jubilees 3:30-31 and 7:20, did the crucified person wear a loin cloth.

“The tunic, which was seamless.”  On the day of His death, Jesus wore an expensive garment, the kind that was normally worn only by the upper class individuals (see 15.02.09.Q1).  However, in this case, it was symbolic of Him being the universal and spiritual high priest of humanity, as the high priest was the same for the Jews.  According to the Mosaic Law, the high priest in the tabernacle, and later in both temples, was required to wear a garment of a single piece of fabric (Ex. 28:31-43); a highly prized garment known as the tunic or cetoneth.[5]  Since the cetoneth that Jesus wore was a continuous fabric, to tear it would have destroyed its value. Therefore, the soldiers cast lots for it. [6] This action was the fulfillment of the messianic prophecy found in Psalm 22:18.  Josephus described priestly garment in this manner:

Now this vesture was not composed of two pieces, nor was it sewed together upon the shoulders and the sides, but it was one long vestment so woven as to have an aperture for the neck; not an oblique one, but parted all along the breast and the back.

The gospel writer mentioned the four soldiers, who mocked Jesus and gambled for His garment. He also mentioned four women who wept when they realized Jesus was about to die.  The identical number was no accident.  Certainly there were many more (Zech. 12:10) who mourned the death of Jesus.  Nevertheless, John used this as a literary device to heighten the tension of the event.[7] 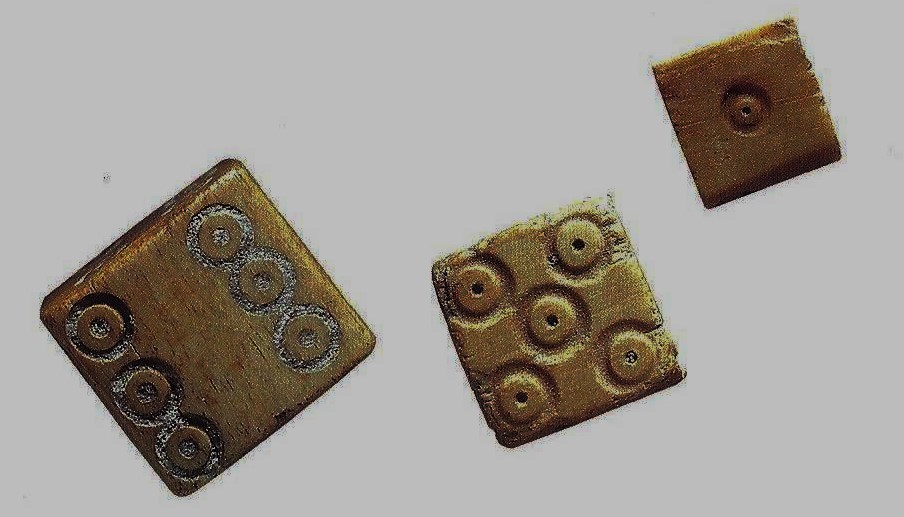 16.01.12.A. Roman Dice.  Roman dice found at Sepphoris are typical of the first century.  They were made of bone and opposite faces always added up to seven.

The Antonia Fortress was destroyed and today the Convent of the Sisters of Zion is upon its foundation.  On the lower floor of the Convent is a second century (A.D.) stone pavement floor, which scholars believe was built by Emperor Hadrian in the reconstruction of the city.  On one of the pavement stones is an inscribed game, which appears to have similarities to the dice game of the biblical narrative.  The Fortress may not be where Jesus was condemned, but the game is believed to have been the same as when the guards entertained themselves at His expense. The game was a popular entertainment throughout the Empire.[8] 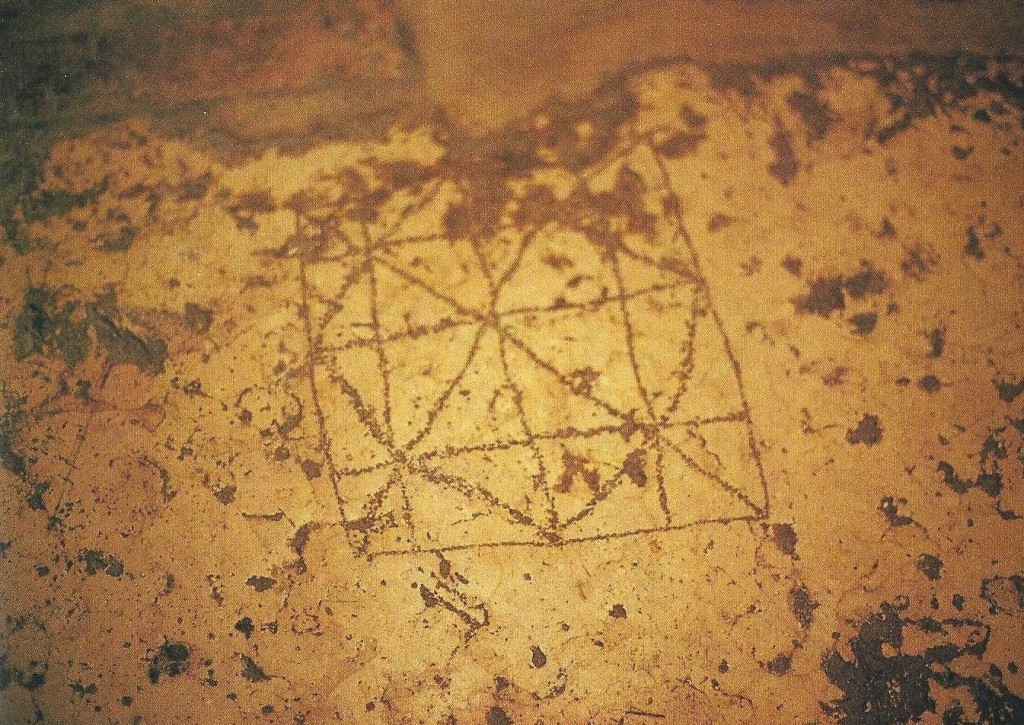 16.01.12.B. A GAME OF DICE INCISED IN STONE.  A pavement stone with an incised dice game found in what was once the Antonia Fortress and is believed to be dated to the 2nd century A.D. when Hadrian rebuilt Jerusalem. A dice game was often played when soldiers had idle hours and at times, was part of the King’s Game that was often played by Roman soldiers as they taunted prisoners.

A similar dice game has been found incised on a pavement stone on the road in Sepphoris. It is the same as that found on a second century (A.D.) stone floor of the Antonia Fortress (today’s Convent of the Sisters of Zion) as well as on a stone in the mountain-top city of Hippos. There is little doubt that these games are the same as, or similar to, first century games of chance. 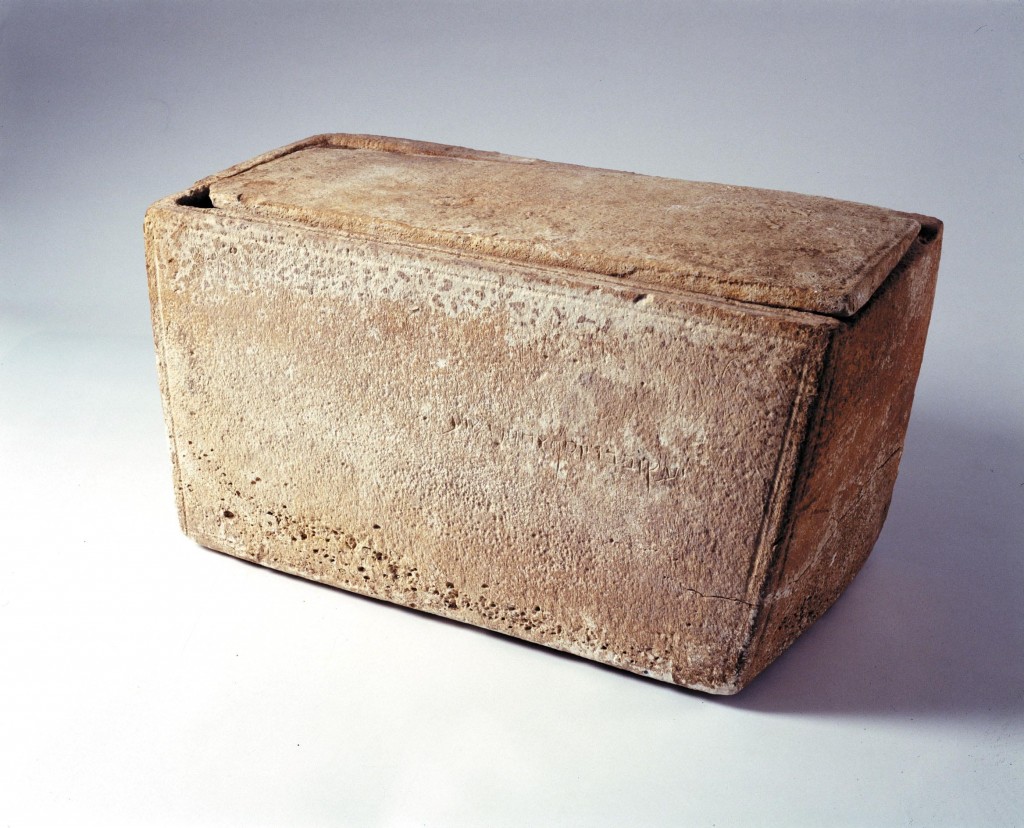 16.01.12.C THE OSSUARY OF JAMES, THE BROTHER OF JESUS. This ossuary with an inscription indicating that it belonged to James, the brother of Jesus, was the subject of a court battle and continues to be debated among academics. Those who claimed the inscription was fraudulent lost their case, but that does not prove the inscription is genuine. Photo by Wikipedia Commons.

In 2011 and 2012 scholars in the fields of archaeology and paleography (the art and science of authenticating and dating inscriptions based on the shape and stance of various letters) examined, studied, debated, and held conferences concerning the authenticity of an ossuary with the inscribed words, “James, son of Joseph, brother of Jesus.” Modern technology has advanced to the point that forgeries are almost impossible to distinguish from authentic antiquities. Therefore, the entire matter of whether the ossuary of James, the brother of Jesus, not only was front page news around the world, but also a legal battle as Israel Antiquities Authority accused the owner of forgery.  While the prosecution failed to prove beyond a reasonable doubt that the inscription was a forgery incised on an authentic ossuary, that failure does not prove authenticity of the inscription. However, even if the inscription is authentic, that does not mean that the ossuary is a reference to Jesus of Nazareth as the name was common.[9]

[2]. Vincent, Word Studies in the New Testament. 2:277.  However, it appears that not all scholars agree on this particular garment. Fruchtenbaum, The Jewish Foundation of the Life of Messiah: Instructor’s Manual. Class 25, page 5.

[3]. Some scholars identify the garment that was worn closest to the skin as a tunic while others call it a cloak. Pilch, The Cultural Dictionary of the Bible. 15-17; Vine, “Clothing, Cloths, Clothes, Cloak, Coat.” Vine’s Complete Expository Dictionary. 2:105-07, and “Garment.” 2:261.

[5]. Some scholars identify the garment that was worn closest to the skin as a tunic while others call it a cloak. It is doubtful that Jesus would have told someone to give a second pair of underwear to another person, but to give a second coat would have been more acceptable. The Jewish culture was a highly modest one and nakedness was condemned. Pilch, The Cultural Dictionary of the Bible. 15-17; Vine, “Clothing, Cloths, Clothes, Cloak, Coat.” Vine’s Complete Expository Dictionary. 2:105-07.