21 They forced a man coming in from the country, who was passing by, to carry Jesus’ cross. He was Simon, a Cyrenian, the father of Alexander and Rufus. 22 And they brought Jesus to the place called Golgotha (which means Skull Place).

Jesus carried the heavy crossbeam through the crowded streets of Jerusalem.  Thousands who had seen Him perform healings and other miracles could not believe their eyes. The Man who was loved by the multitudes was being crucified on the eve of Passover.  Soon they would learn of the significance of that connection. But in the meantime, Jesus struggled through the streets of the Holy City and stumbled to the ground.  Some medical scholars believe this was possibly due to an early stage of shock.[1]

Simon of Cyrene (modern Libya) was a proselyte Jew, who had come to Jerusalem to celebrate Passover, and just happened to be near the procession when Roman soldiers ordered him to carry the crossbeam for Jesus.  There was no reason given as to why he was selected.  Since he was, however, from North Africa, he most certainly was Jewish African and for this reason, he may have been drafted into service.[2] Josephus recorded that there was a Jewish colony in Cyrene.[3]

According to the Oral Law, the act of carrying the crossbeam defiled him. The irony is that he was prevented from celebrating Passover, the sole purpose for which he had traveled across the Mediterranean Sea to Jerusalem.  However, according to an early church tradition, this act was also the point of his conversion. Eventually he and his sons became leaders in the Jerusalem church (cf. Rom. 16:13).[4]

Verse 21 states that “They forced” Simon to carry the cross for Jesus. The word forced is from the Greek term aggareuein, meaning to compel.[5]  The origin of the word is Persian, who authorized their couriers to force anyone into service for them, if assistance was needed. In this case, Simon had no choice but to obey the Roman soldiers or risk death.

“Simon, a Cyrenian, the father of Alexander and Rufus.” Mark presents a piece of unique evidence which supports the theory of a mid-first century writing of his gospel.  In this passage, Mark refers to a certain man identified as Simon, the father of two sons.[6]  His sons are mentioned here and nowhere else in Scripture. If they were significant individuals, their names would, most certainly, have been remembered for generations and mentioned by the early church fathers or in extra-biblical books.  However, the fact that they were essentially “nobodies” indicates that the gospel was probably written in the lifetime of the two sons, even though the father may have passed on.  Since obscure names are soon forgotten, Simon and his sons must have been influential in the Jerusalem congregation prior to the destruction of the temple.[7]  It is noteworthy that the Christian faith spread quickly to Cyrene as found in Acts 11:20 and 13:1, and Simon of Cyrene was probably very much involved in that work. 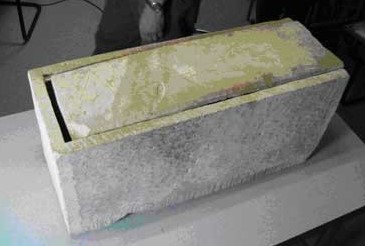 16.01.08.A. THE BURIAL OSSUARY OF ALEXANDER, THE SON OF SIMON OF CYRENE. In 1942 a remarkable discovery was made.  The Ossuary containing the bones of Alexander, the son of Simon, who carried the cross of Jesus was found in a cave-tomb in the Kidron Valley. Ossuaries varied in size, barely long enough to hold the longest human bone – the thigh bone. Hence, sizes were approximately 12 inches wide by 15 inches high by 24 inches long.  Photo courtesy of the Israel Museum.

[7]. When archaeologists discovered the burial cave that contained this ossuary, they also found 13 intact pottery vessels that clearly dated the last use of the tomb to pre-destruction Jerusalem. Powers, “Simon of Cyrene’ Tomb Connnection.” 17:4, 4.