14 When the hour came, He reclined at the table, and the apostles with Him. 15 Then He said to them, “I have fervently desired to eat this Passover with you before I suffer.      16 For I tell you, I will not eat it again until it is fulfilled in the kingdom of God.”

Jesus and the disciples gathered to celebrate a feast that was ordained of God since the foundations of the earth. All seven of the so-called Jewish festivals are, in fact, God’s festivals (Lev. 23). They are “types and shadows” of Christ, meaning that, in some way, they illustrate His characteristics.[1]

16 Therefore, don’t let anyone judge you in regard to food and drink or in the matter of a festival or a new moon or a Sabbath day. 17 These are a shadow of what was to come; the substance is the Messiah.

The Passover observation ended with the rise of Constantine to power. He clearly separated Judaism from Christianity in every way possible.[2]

“When the hour came.” Passover was observed in the evening, immediately after sunset when the first two or three stars were visible in the sky (about 6:00 p.m.).[3]  At that time, from the highest point of the temple, there was a three-fold blast from the silver trumpets.[4] The anticipated hour had arrived because this was a solemn moment in the life of every Jew, but even more so for Jesus and His disciples.[5] For Jesus, it was time to observe the Passover; for most other Jews, it was Preparation Day for Passover.  No doubt they wondered why Jesus and His disciples were celebrating this sacred event a day early.

“He reclined at the table, and the apostles with Him.”  This private feast had a clear theological purpose: to bring the past vividly into the present, so that the imagery of the sacrificial lamb of Passover, celebrated for some fifteen centuries, would be recognized as representing none other than Jesus Himself.

The Last Supper was not, as most modern Christians tend to believe, simply bread and red wine (or grape juice).  Rather, as stated previously, it was a full meal in Passover style with the Communion elements integrated into it. The group probably would have been seated around a triclinium table with one or two servants serving them.  The typical social setting was for men and women to recline at a table and lean on their left elbow.  This was a custom adopted from the Greeks centuries earlier and continued throughout the Roman Period. The only purpose of reclining was to enjoy a meal together.[6]   They would eat only with their right hands. Using the left hand to pass or get food was highly offensive, as it was the hand of personal hygiene and cursing. 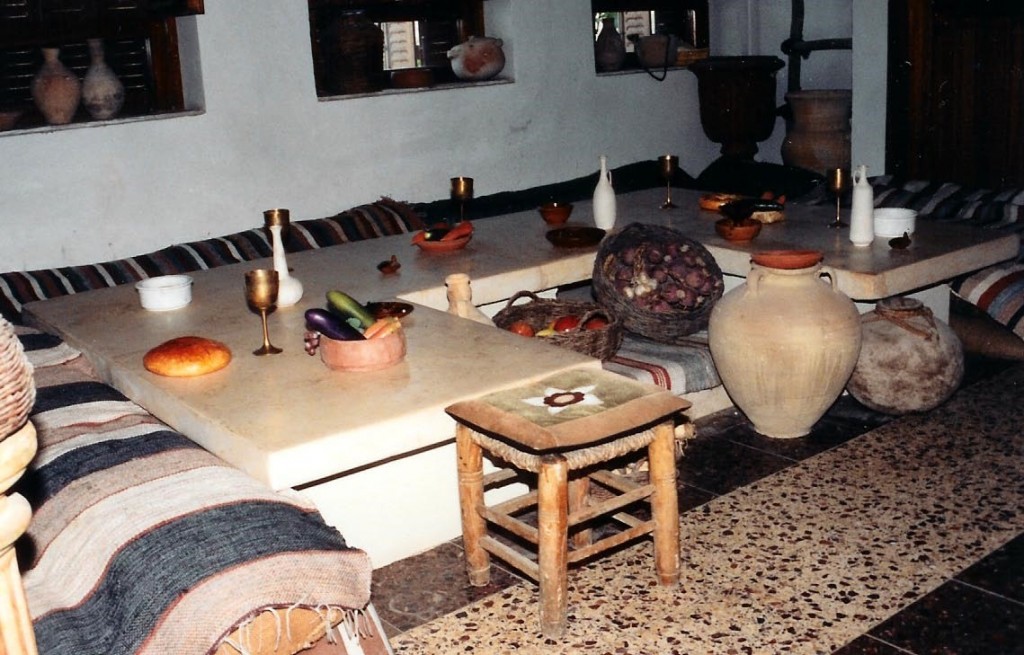 14.02.04.A. A RECREATED TRICLINIUM COUCH.  In this recreated setting, a triclinium is a low couch that is in the shape of a letter “U.”  Guests laid on pillows or mats and leaned on their left elbows while using the right hand to eat. Servants would be able to walk in the center of the “U” to provide beverage and food for everyone. However, some scholars believe this is an incorrect representation and that the triclinium around a square or circular table.  Photographed at the Pilgrim Center in Jerusalem by the author.

In ordinary home life, people sat on chairs.  But on festive events they reclined on low couches that were set in a “U-shaped” configuration around a rectangular table. This layout was known as a triclinium. Reclining was symbolic of freedom and wealth as opposed to the enslavement their forefathers endured in Egypt.  Rabbi Levi said, around the year A.D. 300, that,

Because slaves eat standing, here [at the Passover meal] people should recline to eat to signify that they have passed from slavery to freedom.

At any special gathering such as Passover, the host was always the rabbi and his disciples were reclining, not seated, around the triclinium.[8] The rabbi of the group, who in this case was Jesus, was always the host. 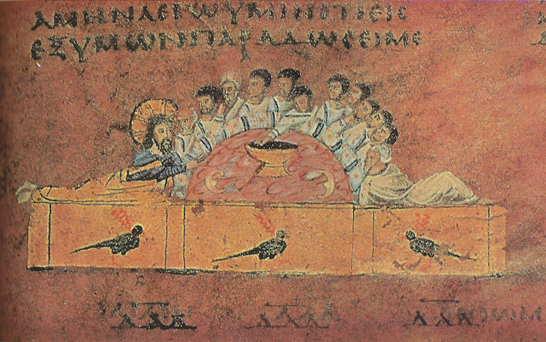 14.02.04.B. A 6th CENTURY DEPICTION OF THE LAST SUPPER.  This illustration depicts Jesus (seated on the left) with His disiciples around a triclinium.  This Roman-Greco custom of fine dining was adopted by the Jews and nearly all other Middle Eastern cultures. It represented freedom, dignity, and wealth. This scene is part of the Rossano Codex, a parchment manuscript of the Gospels preserved in Rossano, Italy. Scholars believe it is the work of Syrian or Byzantine scribes.

[1]. See “Levitical Feasts as Prophetic Reflections of Jesus” in Appendix 5.

[2]. See William Heinrich, In the Shame of Jesus: The History of Church-Sponsored Anti-Semitism.

[8]. Some scholars believe that the triclinium consisted of three couches positioned on three sides (“tri” means 3) of the table, and was not the U-shaped table itself.