JUDAS PLANS THE BETRAYAL OF JESUS

Lk. 3 Then Satan entered Judas, called Iscariot, who was numbered among the Twelve. 4 He went away and discussed with the chief priests and temple police how he could hand Him over to them.

Mt. 15 and said, “What are you willing to give me if I hand Him over to you?” So they weighed out 30 pieces of silver for him.

Lk. 6 So he accepted the offer and started looking for a good opportunity to betray Him to them when the crowd was not present.

A turn of events suddenly occurred. The Sanhedrin was planning to execute Jesus after Passover, when the crowds would be gone and there would be little possibility for public outrage.  Judas, however, came to them unexpectedly with a generous offer of betrayal for only thirty pieces of silver.[1] That was just too good to pass up; they could not afford to miss this opportunity.  In the process, “Satan entered Judas.” The word entered would be better defined as took control of or Satan-possessed.[2]  This was possible because Judas made a willful decision, otherwise, it would have been impossible for Satan to do this. To expedite the matter they would attempt to have Jesus executed prior to the Passover.  This meant preliminary trials would have to be held at night and some procedural matters would have to be set aside because time was of the essence.

“30 pieces of silver.”  A piece of silver was a reference to a silver half-shekel.[3]  Thirty pieces of silver was equal to about one hundred twenty drachmas (or Roman denarii), the price of the common slave laborer.[4] It was equal to four months’ wages for a day laborer.[5] Other slaves who were educated accountants, doctors, and teachers and were extremely expensive (See Mt. 27:3-10; Acts 1:18b-19). But the price given to Judas was for a common servant slave.[6]

14.01.12.Q1 Why was Judas needed to betray Jesus when everyone so easily recognized Him?[7]

The Sanhedrin had been observing Jesus intently for more than three years.  Members of the high court had debated Him and were frequently humiliated before their constituents.  They knew all too well what He looked like and certainly did not need anyone to identify Him, even in the dark night.  What made the offer of Judas so enticing was that he was willing to fulfill one of the legal demands – they needed an accuser.  The irony is that they abandoned so many laws, yet this one they honored. They could bypass some of their own procedural laws, but to sidestep Roman law was a different matter. However, possibly the most important reason Judas was needed was because, under Roman law, Pilate could not send out a Roman cohort to arrest anyone unless…

Judas was very much aware that the Jews had no legal authority to impose capital punishment, so if Jesus was going to die, it would be at the hands of the Romans. His betrayal confirmed by the arresting Roman soldiers would have met the requirements of the law. Caiaphas and the supreme counsel knew the trials would begin in the Jewish court and would end in the Roman court.  They had only one opportunity to rid themselves of Jesus and they could not afford any mistakes.   To Caiaphas it was most important that the trial and execution be completed as quickly as possible and in secret, before His followers, who previously greeted Him with palm branches, became aware of what was happening.

During festivals the Romans maintained a cohort[8] in the Antonia Fortress to quell any possible civil unrest or capture any Zealot who claimed to be the messiah. But for someone as significant as Jesus, Caiaphas and other Sadducees called upon their own temple guards, in addition to the Roman soldiers.  This Roman cohort in the Antonio Fortress was not led by a centurion, but by Chiliarch (Jn. 18:12), who was one of the six tribunes attached to the Tenth Legion.[9]  Hence, his high official position gave the Sanhedrin more clout for an arrest, a speedy trial, conviction, and execution. It is interesting that no charge was ever spoken against Him at the time of His arrest.

It should be noted that the high priests and Romans were so closely aligned in their control of the Jews that priestly garments for temple worship were secured in the adjacent Antonia Fortress, not in the temple.  Josephus commented the following concerning the vestment storage,

… At the command of the Emperor … they should lay up the long garment and the sacred vestment, which it is customary for nobody but the high priests to wear, in the tower of Antonia, that it might be under the power of the Romans, as it had been formerly.

The significance of the garment storage is that this is clear evidence of the close relationship the Sadducees had with the Romans. So when Judas put his plan into action, it took only moments for the Sadducees to gather some Roman soldiers, and along with the temple security, they went to capture Jesus. 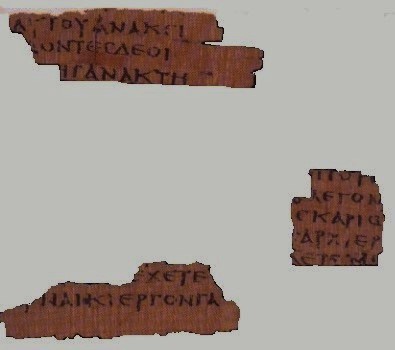 14.01.12.A. THE MAGDALEN PAPRYUS. The “Magdalen” Papyrus of Matthew (P. Magd. Gr. 17 = P64) was found in Egypt in 1901.  These three small pieces, written on both sides, reveal portions of Matthew 26:7-8, 10, 14-15, 22-23, and 31-33. However, the pieces are so small that scholars debate on its date of origin (2nd century?).  Unfortunately, academic opinions are often based more upon the theological beliefs held by those performing the research. If authentic, these demonstrate that the gospel message traveled faster to other nations than was previously thought. Courtesy of Magdalen College library, Oxford.

The conspiracy and night trials were needed because Jesus remained extremely popular and both were needed to prevent a riot from breaking out.  This is the strongest argument against the common belief that all the Jewish people wanted to see Jesus crucified.  Only the Jewish leadership wanted Him dead.  The crowds wanted Jesus to declare Himself as the political-messiah who would overthrow the Roman Empire and rebuild the historic Davidic Empire.

[8]. A cohort at full strength consisted of approximately 600 soldiers, although the word was also used for a maniple that is a detachment of 200 soldiers. Some scholars believe there was more than a single cohort stationed in Jerusalem on high holy days such as Passover. See Harrison, A Short Life of Christ. 199.  Historians seem to disagree on the size of cohorts and legions. See comments on the size of cohorts and legions in 08.05.02.