29 “Woe to you, scribes and Pharisees, hypocrites! You build the tombs of the prophets and decorate the monuments of the righteous, 30 and you say, ‘If we had lived in the days of our fathers, we wouldn’t have taken part with them in shedding the prophets’ blood.’ 31 You, therefore, testify against yourselves that you are sons of those who murdered the prophets. 32 Fill up, then, the measure of your fathers’ sins!

33 “Snakes! Brood of vipers! How can you escape being condemned to hell? 34 This is why I am sending you prophets, sages, and scribes. Some of them you will kill and crucify, and some of them you will flog in your synagogues and hound from town to town. 35 So all the righteous blood shed on the earth will be charged to you, from the blood of righteous Abel to the blood of Zechariah, son of Berechiah, whom you murdered between the sanctuary and the altar. 36 I assure you: All these things will come on this generation!

“You build tombs for the prophets.” The construction of ornate tombs for murdered prophets was a vain attempt by leaders to gain atonement for their wicked sin.[1] In the Kidron Valley, at the base of the Mount of Olives, the Pharisees constructed the tombs for two prophets, Zechariah and Jehoshaphat, when Jesus spoke with them.[2] Eventually they also constructed the tomb of Absalom, a memorial for the wayward son of King David.[3]

“Snakes! Brood of vipers!”  The imagery Jesus applied to them was none other than the deceptive and unclean animal – that famous serpent – in the Garden of Eden. Jesus, in a very profound manner, said that they were no different than Satan who deceived Adam and Eve, and they were likewise, deceiving the Jewish people.

It is noteworthy that, at this time, a snake was not symbolic of Satan but was symbolic of his deceptive character. (For centuries the snake had been symbol of renewed life because it sheds its skin annually.) The obvious implication is that they were deceptive, unclean, deadly leaders.  It was the ultimate insult.  Most certainly, their anger and bitterness were near the point of uncontrollable outrage.

Finally, at this point there has been a great deal of conversation between Jesus and His opponents, but little has been said of those who supported Him. Yet there is evidence that His popularity was increasing, such as the illegal trials at night to avoid a public response that would have been supportive of Jesus. Therefore, it is easy for readers to acquire a warped view that every Jewish person was becoming “anti-Jesus.”

The text clearly reads “Zechariah, son of Berechiah,” but the identity of this Zechariah (or Zecharias) has often been debated. There are twenty-seven individuals named Zechariah in the Old Testament, two of whom were martyred and Jesus obviously referred to one of them.  The arrangement of Old Testament books could point to a possible conclusion that Jesus did not mean Zechariah who was the last to be martyred, but rather, Jehoiada.  To explain this apparent difficulty, note that the Old Testament books are not in chronological order in either the Jewish or the Christian Bibles. The Jewish Bible begins with Genesis and ends with 2 Chronicles. According to this chronology, the righteous blood that was shed spans from Abel (Gen. 4:8) to Zachariah, the son of Barachiah, who was also known as Jehoiada (2 Ch. 24:20-22).

20 The Spirit of God took control of Zechariah son of Jehoiada the priest. He stood above the people and said to them, “This is what God says, ‘Why are you transgressing the Lord’s commands and you do not prosper? Because you have abandoned the Lord, He has abandoned you.’” 21 But they conspired against him and stoned him at the king’s command in the courtyard of the Lord’s temple. 22 King Joash didn’t remember the kindness that Zechariah’s father Jehoiada had extended to him, but killed his son. While he was dying, he said, “May the Lord see and demand an account.”

The Zechariah (a/k/a Zacharias) referred to by Jesus was the prophet and son of Jehoiada/Berechiah (Zech. 1:1) whose ministry ended in 480 B.C. He preached the message of Ezra and Nehemiah, that the people should follow the ways of God.  However, opposition against him was great.  Later, the Jews were so ashamed that their prophet was martyred in the temple that the Hesir family of priests erected a memorial-tomb for him in the late second or early first century B.C.[5]

Ironically, while Zechariah preached a return to the Jewish laws and rejection of paganism, the tomb that bears his name reflects Greek architecture and has an Egyptian-styled pyramid roof and motifs he so strongly opposed. However, there is a growing opinion among scholars that the tomb was misnamed and the rightful owner is uncertain. 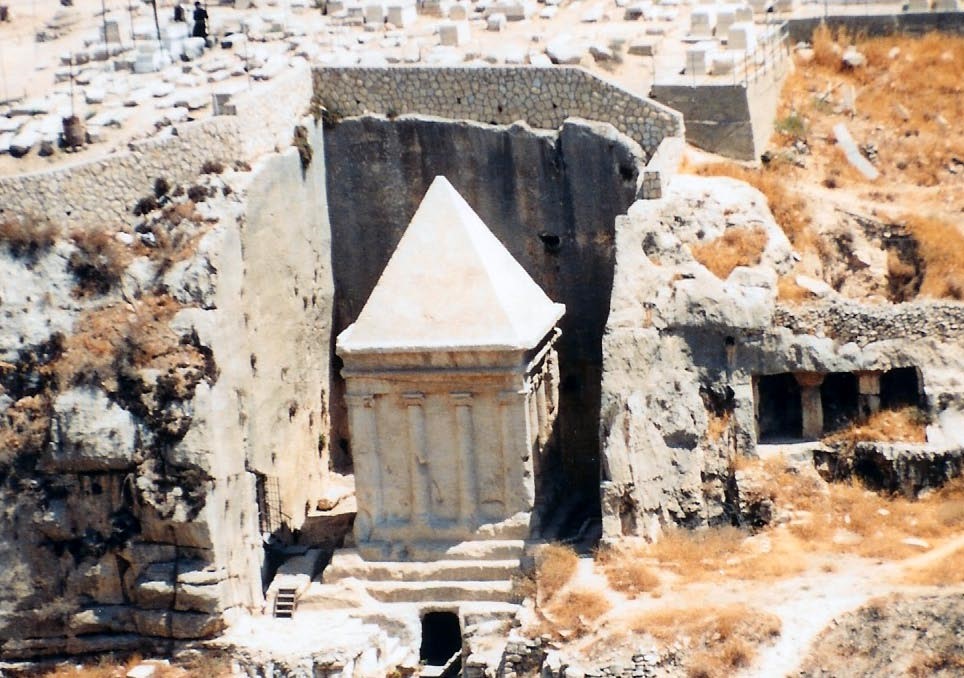 13.05.05.A. THE SO-CALLED TOMB OF ZECHARIAH.  The tomb design reflects both Greek and Egyptian pyramidal architecture.  It is located in the Kidron Valley, between the Mount of Olives and Temple Mount. Photograph by the author.

His public ministry ended with the lament, “O Jerusalem, Jerusalem …”  He will not return until the Jewish leaders ask him to come by reciting the messianic greeting of Psalm 118:26. It must be noted that at that time some men had two names and Jehoiada is cited in the catalog of priests in 1 Chronicles 6. Therefore, two biblical authors could have referred to the same person who had two different names, although the connection between the names has been lost in history.[6]  Therefore, it is easy for a critic to claim a possible error, when in fact, not all the connecting information is currently available.