22 Then He told the disciples: “The days are coming when you will long to see one of the days of the Son of Man, but you won’t see it. 23 They will say to you, ‘Look there!’ or ‘Look here!’ Don’t follow or run after them. 24 For as the lightning flashes from horizon to horizon and lights up the sky, so the Son of Man will be in His day. 25 But first He must suffer many things and be rejected by this generation.

so it will it be in the days of the Son of Man:

Marrying, and given in marriage

until the day Noah boarded the ark,

and the flood came and destroyed them all.

fire and sulfur rained from heaven and destroyed them all.

30 It will be like that on the day the Son of Man is revealed. 31 On that day, a man on the housetop, whose belongings are in the house,

must not come down to get them.

Likewise the man who is in the field

must not turn back. 32 Remember Lot’s wife!

33 Whoever tries to make his life secure

and whoever loses his life

on that night two will be in one bed:

One will be taken and the other will be left.

35 Two women will be grinding grain together:

One will be taken and the other left.

One will be taken, and the other will be left.]”

37 “Where, Lord?” they asked Him. He said to them, “Where the corpse is, there also the vultures will be gathered.”

The English words “among” and “within” are translated from the Greek adverb entos,  which usually means within. The Greek phrase entos humon can be translated to read within you, in your midst, or within your grasp.[1]  It appears that Jesus referred to all three definitions.  In this case, the word among is rather weak and does not fully compliment the meaning of the passage. For the Kingdom to be within you means that Jesus is in complete control of one’s life.

According to some theologians, the kingdom of God is “among you” now, but during the Millennial Reign of Jesus the Kingdom of God will be a political-religious kingdom.  This new Kingdom will be the life of God living within the believer. It could also be translated as meaning “in your midst,” or “among you.”[2]  In essence, Jesus said that His character was “within you.”  The gospels declare the main theme of Jesus is the Kingdom of God/Heaven, whereas in the rest of the New Testament the theme is Jesus. Of course, His character is the Kingdom of God within His believer.  If one desires to have the kingdom within, the life of Jesus must be within his heart.

“The Son of Man will be in His day.”  Here Luke equated the Hebrew phrase Day of the Lord with Jesus’ return in judgment at the end of time. There will be the climactic battle known as the “great day of God Almighty” (Rev. 16:14). Then the forces of evil are destroyed by the Lord God Himself.  Most certainly, this is what John the Baptist had in mind when he spoke of the one who would follow him and bring judgment upon the earth.

As stated previously, and this point is critical, the phrase Son of Man, or Bar Enosh in Aramaic,[3] in the book of Enoch is a figure, who is waiting in heaven until God sends him to earth where he would establish his kingdom and rule over it. This book was common knowledge to the Jewish people, so when Jesus used the phrase about Himself, He was clearly claiming to be the long-awaited Messiah. That is quite interesting, because the book of Enoch was written in the Inter-Testamental period, and the expressions of “Son of Man” and “Son of God,” when used of Christ, do so to express His deity.[4] The mystery that remains veiled is this: How did the writer of Enoch know this?

“Just as it was in the days of Noah.”  Noah was the spokesman for God to a depraved world that was determined to seek its own pleasures, while Lot (v. 28) was a preacher of righteousness in a sexually depraved culture.[5]  Each man gave warning to the people of their cities.  The few who placed their faith in the Most High God were saved, while the others died in the predicted destruction.  This phrase has a reference to the judgment that followed Noah and Lot. Jesus essentially said that people would be busy pursuing the daily events of life with no thought of God, Judgment Day, or eternity.

“Remember Lot’s wife!”  To protect them from death, Lot and his family were personally led out of Sodom by two angels (Gen. 19).  As they fled, Lot’s wife looked back and instantly became a pillar of salt. Her name is not recorded in Scripture, but according to the ancient Book of Jasher (19:52), it was Abo (Edith).[6]

When God told them to flee, it was to remove them from the wickedness of Sodom, its pending destruction, and to look forward to a better future.  However, a moment of disobedient hesitation cost her life. The lesson is that one cannot have a passion for both the world and for God.  The comment “remember Lot’s wife” was a serious warning to not be part of a degeneratinge world, but to keep one’s focus on Christ Jesus. Similar warnings are found in the parable of the ten virgins, two women at the grinding stone, etc. The warning to be prepared to meet God and give an account of one’s life has not changed.[7] Clearly, it was never intended to be a point of humor.

“Where the corpse is, there also the vultures will be gathered.” This is an excellent example where the context of a statement presents the definition of a word.  In the Greek language, the same term is used for eagle and for vulture. However, since eagles would not eat a corpse, the meaning is clearly vulture.[8]

In this narrative, the dead body represents the nation of Israel and the vultures represent the Gentile nations that one day will come against the Jewish state. Some scholars believe that prior to the final battle of the ages, many Jews will flee to the ancient city of Petra (Jer. 49:13-14). It is also where many believe Jesus will return with His heavenly army to save them from destruction.[9] 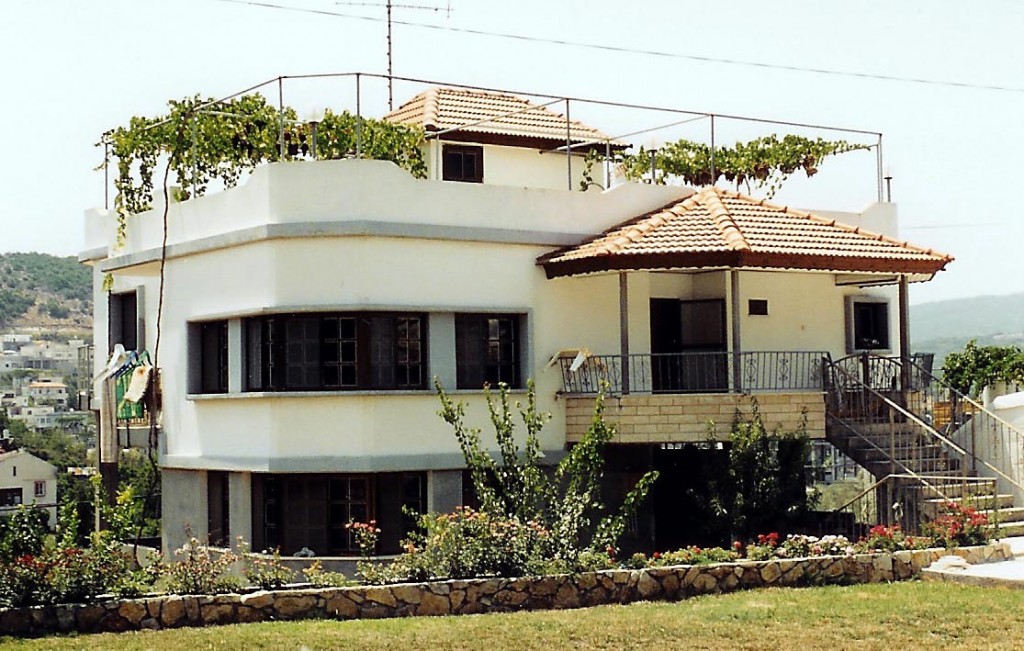 12.03.15.A. ROOFTOP LIVING AS  IN ANCIENT TIMES.  This modern home in Israel has an area on the roof designated for resting, relaxation, and family time, as was done in Bible times. This is typical of many homes throughout the Middle East today.  Photograph by the author. 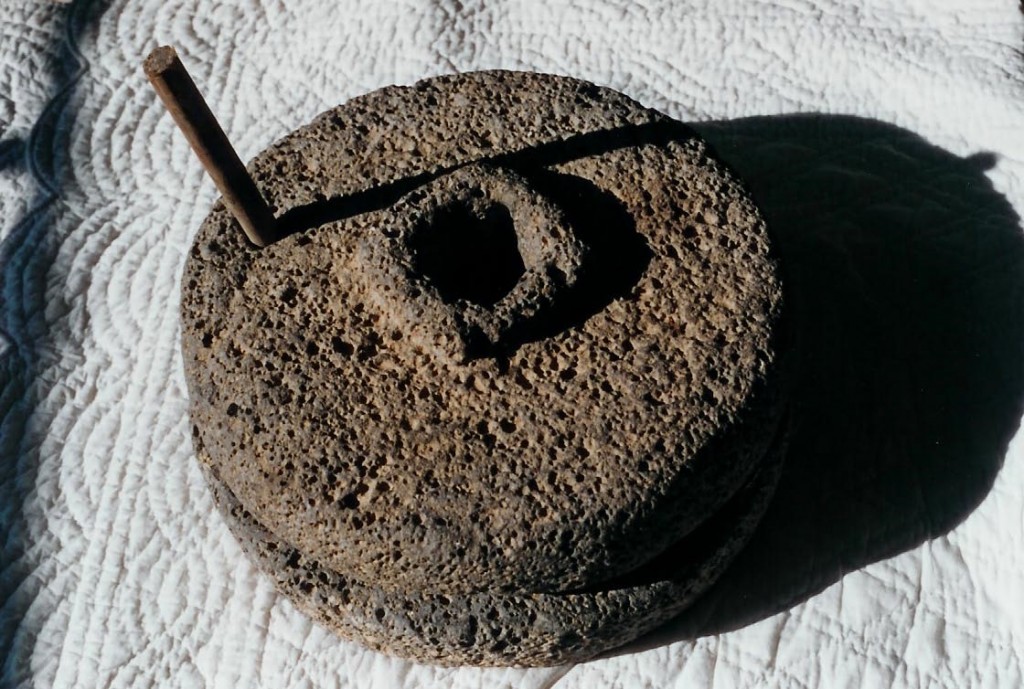 12.03.15.B. A PAIR OF GRINDING STONES.  This crude kitchen took, a pair of basalt grinding stones, was typical of household implements of the first century that Jesus probably referred to when He said that two women would be grinding grain, and one would be taken.  Grain was placed in the center hole.  As the top stone was turned, the grain crushed against the bottom stone. The crushed grain, called flour, fell out of the edges of the stones.  Photograph by the author.

[6]. Jordan. Who’s Who in the Bible. 237. That narrative has generally been perceived with less respect than is deserved – almost with a point of humor.