PARABLE OF THE MUSTARD SEED

31 He presented another parable to them: “The kingdom of heaven is like a mustard seed that a man took and sowed in his field. 32 It’s the smallest of all the seeds, but when grown, it’s taller than the vegetables and becomes a tree, so that the birds of the sky come and nest in its branches.”

The mustard plant that Jesus referred to is generally considered to have been black mustard.  It is the same plant as found in the United States although the soil and climate conditions in the Jordan Valley permit it to grow near the height of a horse.[1]  Scientifically, it is known as sinapis nigra, a member of the cruciferae family of plants that has four-petaled flowers. In Jewish writings the term “mustard seed” was an idiom or proverbial meaning anything that was very small, especially if that small item was unclean.[2]

“It is the smallest of all the seeds.”  Critics have maintained that the mustard seed is not the smallest, but, rather, the orchid seed is.  While this is true biologically and globally, Jesus was speaking in a local context to local people, not to a delegation of international botanists. Why would Jesus have made reference to an orchid plant that does not grow in Israel and His listeners would not know anything about it?  Since orchids did not exist in this region. Jesus was teaching that the black mustard seed was the smallest without discrepancy. In the Hebraic idiom, the smallest weight and dimensional measurement that could be made was the weight and diameter of a mustard seed.[3]  The only reason critics can claim error in this passage is because they examined it through a sterile microscope while ignoring the influences of culture, history, social issues, and the Law. Nonetheless, the mustard seed was the smallest seed known to anyone in the ancient Middle East. A Talmudic writer describes the mustard plant as a tree that grew large enough to cover a potter’s shed.[4]  That certainly would have been sufficient for a number of bird species.

Jesus said is that His word and His ministry are like that seed; His kingdom, represented by a few disciples, would expand to a global force.  This is essentially a prophecy in parable form because, by the end of the first century, Christianity was a major force throughout the ancient Middle East.  Furthermore, He said that before He returns, His words would be spoken to every nation (Gk. ethnic group).[5]

“The birds of the sky come and nest in its branches.” This imagery is reflective of the biblical passages where a great kingdom was as a large tree with birds nesting in its branches.[6]  Each of these prophets used the allegory of a tree where birds could find rest and shelter.  They likened the tree to a large kingdom that would protect many people and insure their lives.  Jesus used the illustration of a mustard seed as it germinated out of the smallest particle and grows to a height of about ten feet.[7] The imagery of a plant to depict God’s people is common in Judaism.[8]  The rabbis often used expressions related to the smallest seed in the Middle East as a figure of speech for its miniature size.[9] Likewise, the Kingdom of God would germinate out of work of His disciples but would grow to an enormous size (Jn. 17:18).

Finally, and this is an important point, in the Old Testament empires were symbolized by trees.  Examples are found in Daniel 4, Ezekiel 7 and 31. Every great empire such as Egypt, Assyria, Babylon, Persia, Greece, and Rome, began small and grew to massive size. Likewise, the Kingdom of God is as small as a mustard seed, but it will grow to a massive size.

On the other hand, in some parables, birds are symbolic of servants of Satan. If this interpretation is correct, then what Jesus was saying was that as the mustard seed grows birds will come to rest in its branches. These birds represent various false teachings and religions that will be attached to or claim to be “Christian.” Jesus repeatedly warned His disciples about false teachers as indicated in Luke 12:1 and Matthew 24:4. 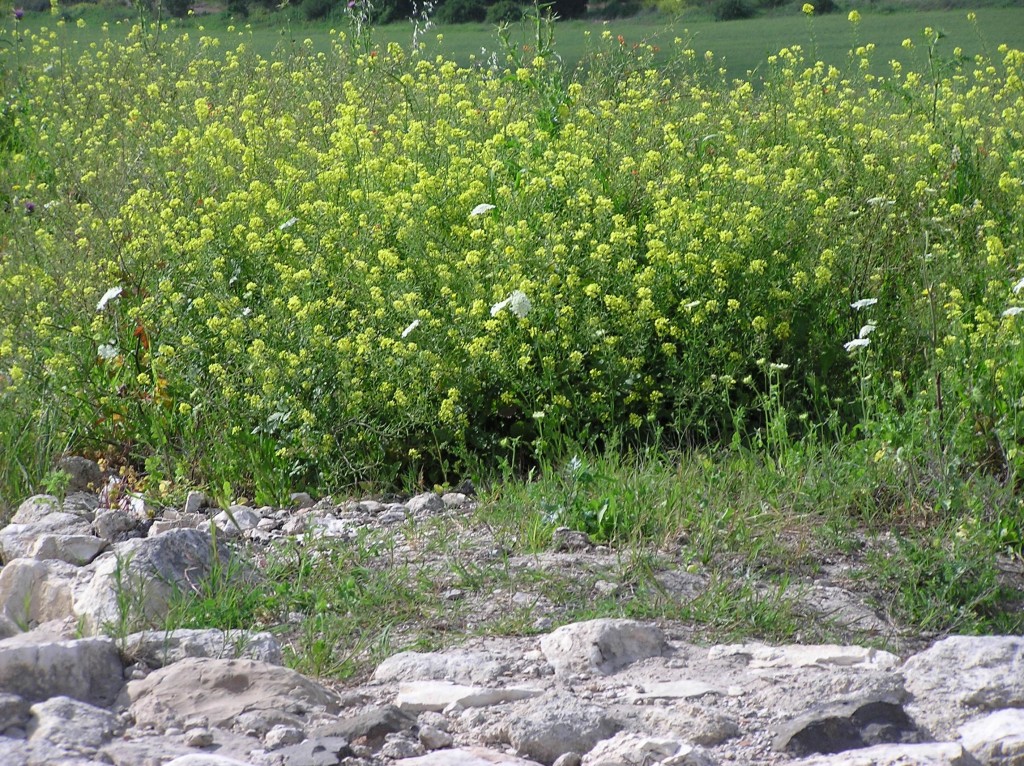 09.03.17.A. YOUNG MUSTARD FLOWERS. Young mustard flowers bloom by the rocky roadside and look like ordinary wild flowers until fully mature, when they become larger than most flowering plants in Israel. Photograph by the author.