18 “You, then, listen to the parable of the sower:

19 When anyone hears the word about the kingdom

and doesn’t understand it,

the evil one comes and snatches away what was sown in his heart.

This is the one sown along the path.

20 And the one sown on rocky ground

this is one who hears the word

21 Yet he has no root in himself, but is short-lived.

When pressure or persecution comes because of the word, immediately he stumbles.

22 Now the one sown among the thorns

this is one who hears the word,

but the worries of this age and the seduction of wealth choke the word, and it becomes unfruitful.

23 But the one sown on the good ground

this is one who hears

and understands the word,

who does bear fruit and yields:

Parables illustrated His teachings through careful thought and discovery and, therefore, listeners were challenged to make a decision.  To get them to change their ideas was difficult for several reasons:

An example is found in the Parable of the Sower, where Jesus mentioned four types of soil:

These types of soil were commonly found on hillside terraced farms.  For centuries peasant farmers terraced their land to prevent erosion and produce bountiful crops. A terraced area was created when a stone retaining wall, usually three to four feet high, was erected parallel along the side of the hill and backfilled with fertile ground to create a level area (see illustration 09.03.14.A below). Where the filled-in area met the natural hillside, there was generally little or poor quality dirt and only weeds and thorns could grow there. It was here that another terraced retaining wall was built with its backside also filled in.  Therefore, while the large area of the terraced land was highly productive, soil near the top of one retaining wall was stony, as was the soil near the bottom of another retaining wall, but the area between could produce a hundred fold.

09.03.14.A. AN  ILLUSTRATION OF TERRACED LAND. Retaining walls (RW) were built about two to four feet high and backfilled (BF) with dirt brought in from other areas to create a level area. Soil near the top of a retaining wall (1) was stony.  While soil near the large center area was fertile and productive (2), the soil near the bottom of the next retaining wall was poor thorny soil (3).  Consequently, a hillside that had poor agricultural prospects was changed into highly productive land. Illustration by the author.

The parable is not concerned about preaching the Word, but rather, the attitude and response of the people who hear the gospel; not about people who reject Jesus, but those who accepted Him. Obviously not everyone who accepted Jesus stayed with Him.  Therefore, in a very real way, this parable is one of productivity for the Kingdom of God.  The seed will always be ready to grow, regardless of how it is received. 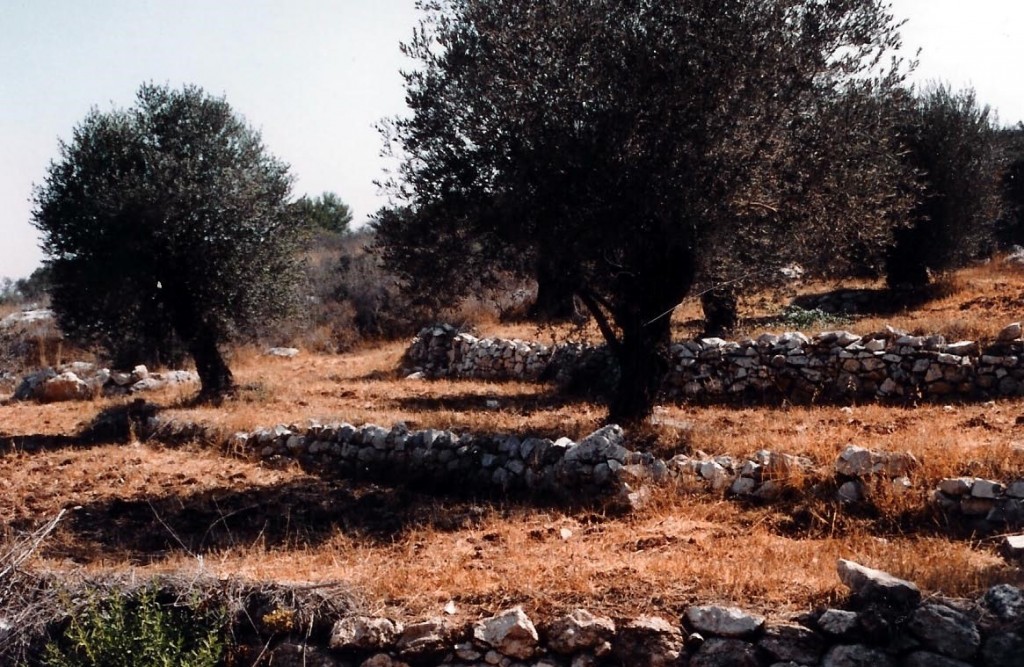 09.03.14.B. OLIVE TREES ON TERRACED HILLSIDE. A grove of olive trees grows on a terraced hillside where the retaining walls are in poor condition due to a lack of maintenance. Photograph by the author.

Some seeds may fall along the rocks, such as along the terraced wall or the hill country north of Galilee and close to the Golan Heights.  Some may fall along the Roman roads like the Via Maris, and some may fall among thorns that resulted from the ground being cursed, some may fall in the rich fertile valley of Galilee where the most bountiful wheat in Israel grew.  Every Jew who heard Jesus speak was very well aware of these illustrations; word-pictures of the seed are in reality the Word of God with the intent of a bountiful harvest. Jesus referred to four types of disciples who were involved with Torah studies.  The message of Jesus was the fulfillment of the Torah.  All disciples are expected to produce a harvest of some type, whatever their calling.  However, any potential harvest is dependent upon the condition of the soil, meaning the condition of the heart of the one who hears the Word (receives the seed), and how that Word is nurtured, cultivated, and discipled into a mature believer who brings forth bountiful fruit.

This parable follows the illustration given by Isaiah who spoke of the rain and snow that prepared the soil for seed, so the seed would sprout and eventually provide for bread (Isa. 55:10).  The prophet then used this pictorial illustration to say that in a similar manner the Word of God will go forth, be productive, and accomplish its intended purpose (Isa. 55:11).   In the days of Jesus, this passage was understood as describing the study of Torah.  However, while many chose to follow Jesus, others became quite hostile and for this reason He quoted Isaiah 6:9-10:

Neither Isaiah nor Jesus desired people to have clouded minds; both gave a clear illustration of the Word of God.  But some people chose not to follow and, as a result, they stumbled.   As every pastor knows all too well, not everyone in his congregation is willing to listen and obey, because every church has the “four types of soil.”  In this case, Jesus not only gave the parable but also its explanation.  In the Parable of the Sower, which might be better called the Parable of the Soils, Jesus described the various responses to His ministry. Nonetheless, there are three important points about the farmer that pertain to the sowing and reaping narrative.

be patient until the Lord’s coming.

is patient with it

until it receives the early and the late rains.

8 You also must be patient.

Strengthen your hearts, because the Lord’s coming is near.

If the word of God is considered a seed, it will be rejected by some people (the poor soil).  Others will accept it for a while but then return to their worldly ways. Still others will decide to accept it and permit it to transform their lives.  They will produce a bountiful crop, as demonstrated by the good works and ministry that will come from their lives.  The harvest imagery is a common figure representing the final gathering of souls for God’s kingdom (Joel 3:13; Rev. 14:14-20).  However, there is also a counterfeit sower who sows evil in the hearts of men. For that reason, the parable of the wheat and tares follows the parable of the sower above.

“Pressure.” The Greek term thlipsis (2347), means anything which burdens the spirit. The term includes extreme pressure that results from the calamities of war (Mt. 24:21, 29).

“Understands the word.”  The term understand is not related solely to intellectual knowledge, but includes the understanding that to be a follower of Jesus there will be times of suffering and persecution.

Jesus and other orthodox rabbis based their teachings on various Old Testament passages. Therefore, it can be expected that many of their parables and stories were similar.  Jesus, being a Master Teacher, built upon various stories and life experiences that His audience already knew. The four soils parable was one that was common knowledge, but a version of it was recorded by a Rabbi Haggai bar Eleazar who is believed to have lived a century or two after Jesus.

There are four types [of people] among those who sit in the presence of the rabbis: the sponge, the funnel, the strainer, and the sieve. “The sponge,” which soaks up everything. “The funnel,” which takes in at this end and lets out at the other, “The strainer,” which lets out the wine and retains the dregs. “The sieve,” which removes the chaff and retains the fine flour.

It is generally assumed by scholars that Rabbi Haggai and other rabbis had basic knowledge of Jesus, but they certainly did not mimic Him.  They and Jesus did, however, share a common cultural context and all based their teachings upon the Hebrew Bible and connected the character of God with His people.

Finally, in a note of trivia, the method of planting seeds as described in this parable did not change for centuries until 1701. At that time Jethro Tull (1674 – 1741), an English agricultural pioneer, invented the horse-drawn grain drill that placed seeds in neat rows.[3] This invention was followed by his second invention of the horse-drawn hoe after which he made improvements to the horse-drawn plow (plough). His ideas helped initiate the agricultural revolution.  Until his inventions, readers easily identified with the parable, but as agricultural methods changed and people became more distant from farming, modern readers find themselves with challenges of understanding this parable.