35 On that day, when evening had come, He told them, “Let’s cross over to the other side of the sea.” 36 So they left the crowd and took Him along since He was already in the boat. And other boats were with Him. 37 A fierce wind arose, and the waves were breaking over the boat, so that the boat was already being swamped. 38 But He was in the stern, sleeping on the cushion. So they woke Him up and said to Him, “Teacher! Don’t You care that we’re going to die?”

39 He got up, rebuked the wind, and said to the sea, “Silence! Be still!” The wind ceased, and there was a great calm. 40 Then He said to them, “Why are you fearful? Do you still have no faith?”

41 And they were terrified and asked one another, “Who then is this? Even the wind and the sea obey Him!”

One of the theological topics often discussed is how much control Satan has over elements of the earth. He certainly does have limited power – limited by God’s design. Yet he was given limited permission to send fire or lightning to destroy Job’s flocks (Job 1:12, 16) followed by a huge storm that destroyed the home where Job’s children were enjoying a banquet (Job 1:18-19).  Satan attempted but failed to seduce Jesus with three temptations and appears now to have made an attempt to sink Him and the disciples while they were sailing across the Sea of Galilee to deliver a man from demonic bondage (see next section 08.06.03).

The image that Bible students often envision associates this narrative of Jesus and His disciples in a small fishing boat as illustrated in the picture above (08.06.00.A).  However, there are some distinct problems with that image.

The description of the stormy tempest and the boat with its occupants leads this writer to conclude that the vessel was considerably larger than an ordinary fishing boat, possibly like the one shown in 08.06.02.A below. It is well known that there were many kinds of boats on the Sea of Galilee. It was a commercial area and the natural resources that permitted a wide range of occupations to flourish. Besides fishing and salting fish, local craftsmen made grinding stones, and numerous agricultural implements. The Greek residents of Gadara, a few miles east of the sea, were the major suppliers for the Roman Tenth Legion.  In addition to raising pigs, they had one of the best growing areas for wheat which was shipped throughout the eastern Roman Empire. Therefore, a variety of vessels was needed for the transport of goods and passengers.  The type of vessel Jesus and His disciples used is unknown, but it probably was one similar to the illustration below that had a protective shield at the stern. 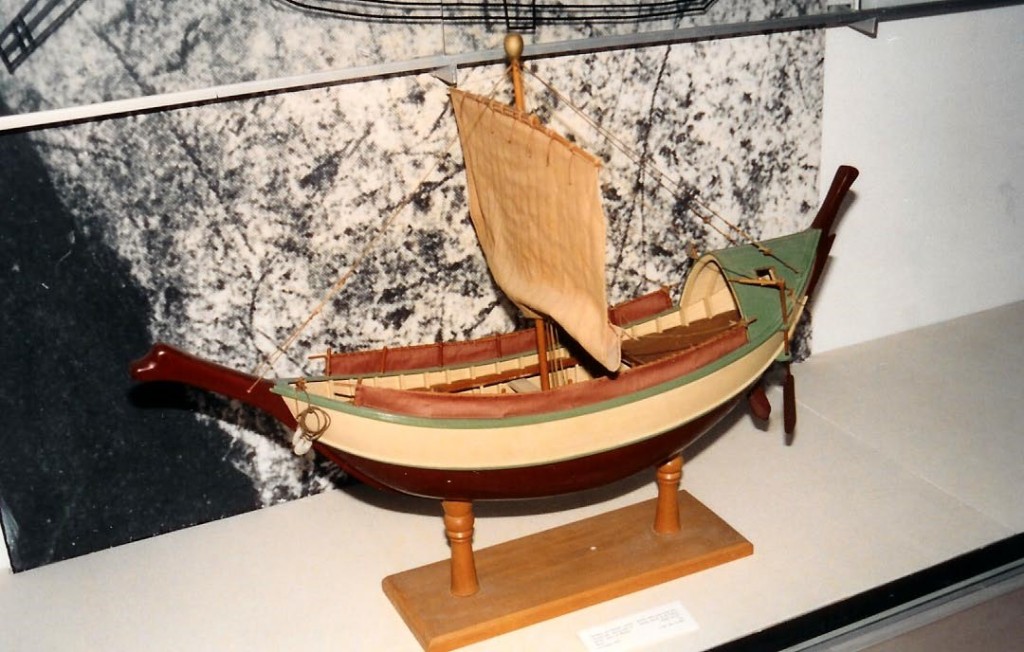 08.06.02.A. A MODEL OF A HERODIAN GRAIN SHIP. This model of a Herodian grain ship was built according to a tomb graffiti design discovered in Masada. Notice that the stern end has a partial covering so someone could sleep and be somewhat protected from the weather. This vessel, thought to be at least twice the length of a typical fishing boat, is believed to have been used in the Sea of Galilee. Photographed by the author at the Dagon Grain Museum, Haifa.

The gospel writer said there was “a fierce wind.” Many Bible translators have used the term storm in place of squall as the event was clearly difficult to describe.  Mark and Luke used the Greek word Lailapa (2978), defined as a hurricane[2] with heavy clouds, rains, darkness, and whirlwind.[3]  However, Matthew (8:24) used a distinctly different word, seismos, meaning earthquake,[4] and he used it again in Matthew 24:7 when Jesus spoke of the earthquakes that would occur at the end of the age. That leads to an interesting question: Did Jesus experience an earthquake and a storm at the same time? When considering that all three synoptic gospel writers described the same event, it is obvious that He not only experienced an earthquake, but did so during an intense wind storm.

However, this storm may not have been accompanied with dark clouds and heavy rains. The Sea of Galilee is unique in that sudden and unexpected wind storms blow from the west, but more commonly from the east to west. The sea is about 680 feet below sea level while the extinct volcanic plateau of the Golan Heights on the eastern side is about 2700 feet above sea level. That is a huge vertical difference within a horizontal distance of a half mile or less.  Near the sea where the Heights meet, there are numerous deep mountain ravines that funnel the winds across the lake with incredible intensity.  Strong winds originate from the heights of Hauran,[5] from the eastern plateau of Trachonitis,[6] or from the northern Arabian Desert,[7] or from the south, bringing fine desert dust and sometimes a dust storm. This wind is known as the Samum or Simoom, which blows north from the African deserts, across the Sinai and Negev Deserts and brings an overpowering heat. When the eastern desert winds come through the ravines and across the waters, they cause an instant storm.[8] A unique feature of these storms, known as the “eastern sirocco winds,”[9] is that they can appear without warning or even a cloud in the sky.

On the other hand, winds from the west can be equally challenging, being funneled down through the Valley of the Doves along the north side of Mount Arbel.[10] These western wind storms in the winter can bring rain, but never in the summer dry season.  How interesting it is that immediately after an earthquake and severe storm, Jesus encountered the demoniac on the eastern side of Galilee.

“Silence! Be still!” Since neither the written Greek nor Hebrew languages had exclamation marks at this time, the emphasis in modern Bibles are the contributions of translators and scholars. Therefore, how Jesus said those words is unknown to us.  One scholar has suggested that He probably was not a shouter, but was a “Storm Whisperer.”

It is noteworthy to see that He used the same words to rebuke the sea as He did to rebuke the fever in Luke 4:39 and the demons in the possessed man of Mark 9:25.  The significance of these words was that the Jews knew that Jehovah also rebuked the sea in Psalm 65:7; 106:9 and Nahum 1:4.  More remarkable, however, are the following passages from the books of Psalm and Proverbs:

9 You rule the raging sea;
when its waves surge, You still them.

23 Others went to sea in ships,
conducting trade on the vast waters.

24 They saw the Lord’s works,
His wonderful works in the deep.

25 He spoke and raised a tempest
that stirred up the waves of the sea.

26 Rising up to the sky, sinking down to the depths,
their courage melting away in anguish,

27 they reeled and staggered like drunken men,
and all their skill was useless.

28 Then they cried out to the Lord in their trouble,
and He brought them out of their distress.

29 He stilled the storm to a murmur,
and the waves of the sea were hushed.

30 They rejoiced when the waves grew quiet.
Then He guided them to the harbor they longed for.

4 Who has gone up to heaven and come down?
Who has gathered the wind in His hands?
Who has bound up the waters in a cloak?
Who has established all the ends of the earth?
What is His name,
and what is the name of His Son—
if you know?

The answer to … “Who then is this?”  The disciples were quite knowledgeable of their Hebrew Bible. They most certainly had difficulty reconciling these passages with what they had just experienced. Without saying a word about His divinity, Jesus demonstrated that He was the God of the Hebrew prophets who wrote the Scriptures.  He responded to the dangerous situation simply by telling the storm to be still.  Yet to say that this miracle demonstrated His divinity over the natural forces of nature misses the point completely – He was/is God! 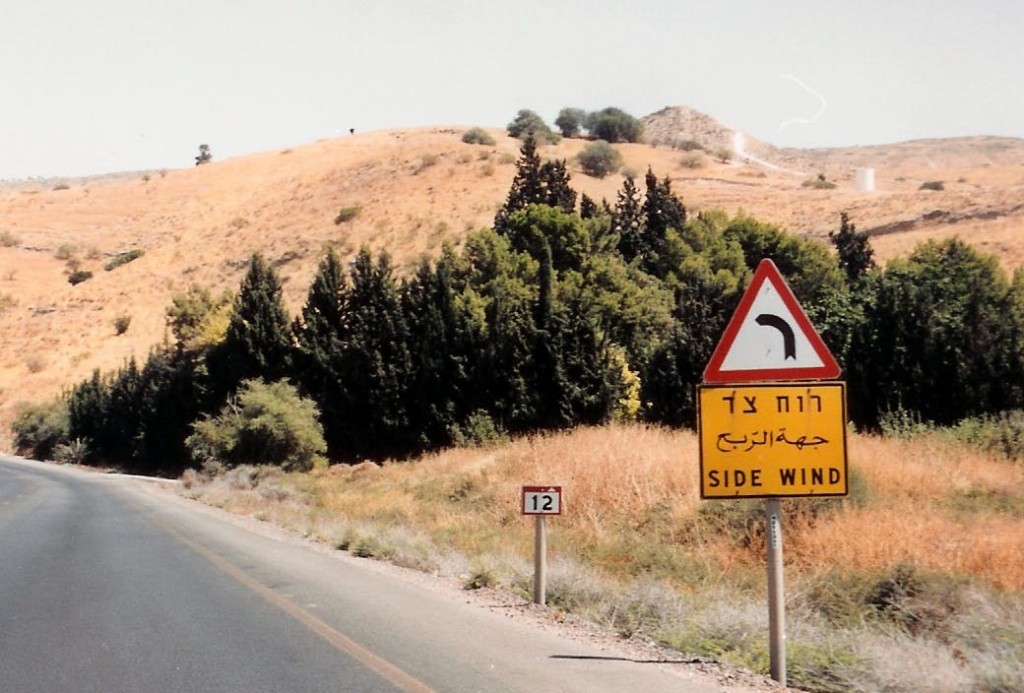 08.06.02.B. CROSSWIND WARNING SIGN.  Just as the winds threatened the safety of Jesus and His disciples on the Sea of Galilee, today these winds surprise unsuspecting motorists traveling along the eastern side of the lake, as evidenced by this warning sign. Photograph by the author.

This is the situation of what the prophet Jeremiah had reference to when he said,

11b “A searing wind blows from the barren heights in the wilderness on the way to My dear people. It comes not to winnow or to sift; 12a a wind too strong for this comes at My call.”

However, this demonstration of divine authority did more than reveal Jesus, it was also a demonstration of divine power and authority over Jewish and Greek myths. The ancient Jews considered the bottom of the Sea of Galilee to be the abyss, a place where demons lived.  The Greeks believed that Zeus ruled the sky and Poseidon ruled the sea and earthquakes.[11]  In the minds of both Jews and Greeks, only divine power could control the sea.[12] Jesus demonstrated that He had that power. A similar event, apparently not as severe since Jesus did not need to calm the wind, occurred when He walked across the stormy waters to His disciples in a boat.[13] At the dawn of creation, He spoke the world into existence; now His word controlled it.

The phrase, “Do you still have no faith?” would be better translated as, “you of little faith,” from the Greek word holigopistoi meaning little faiths.[14]   Matthew used it five times and always in reference to the disciples.[15]  The primary question, whether directly or indirectly, was in reference to where they placed their faith.  This event should have opened their eyes to Jesus being the literal fulfillment of Old Testament prophecies, which in this case were,

they will not overwhelm you.

Greater than the roar of many waters —
the mighty breakers of the sea —
the Lord on high is majestic.

Jesus challenged them to place their faith in His person and word. To those who trusted in their wealth or labor for a safe and secure future, Jesus said that it would be easier for the proverbial camel to go through the eye of a needle.   When He challenged the rich man to give all he had to the poor, which was symbolic of his conversion, the rich man sadly went away, not because he was wealthy but because his security was in his wealth.  St. Augustine had an interesting comment concerning faith:

As amazing as this account is, there is an incredible parallel with the story of Jonah. Notice the comparison below:[17]

This was an experience that might be said in modern English slang, “a double whammie.” The disciples were clearly stunned and marveled when Jesus calmed the sea. But they must have recognized at a later time, the incredible connection of their experience and the events of Jonah. Could it have been a divinely inspired “encouragement” not to flee from their appointed calling?

[6]. Located adjacent to heights of Hauran and was under the domination of Herod Phillip during the life of Jesus.

[7]. Ancient maps identified the greater part of modern Jordan as being part of the northern tip of the Arabian Desert. For a study of historical maps of this region, see Nebenzahl, Kenneth. Maps of the Holy Land. New York: Abbeville Press. 1986.

[10]. Mount Arbel is located a short distance northwest of Tiberias.