JOHN THE BAPTIST IS BORN AND NAMED

57 Now the time had come for Elizabeth to give birth, and she had a son. 58 Then her neighbors and relatives heard that the Lord had shown her His great mercy, and they rejoiced with her.

59 When they came to circumcise the child on the eighth day, they were going to name him Zechariah, after his father. 60 But his mother responded, “No! He will be called John.”

61 Then they said to her, “None of your relatives has that name.” 62 So they motioned to his father to find out what he wanted him to be called. 63 He asked for a writing tablet and wrote: HIS NAME IS JOHN.

And they were all amazed. 64 Immediately his mouth was opened and his tongue set free, and he began to speak, praising God. 65 Fear came on all those who lived around them, and all these things were being talked about throughout the hill country of Judea. 66 All who heard about him took it to heart, saying, “What then will this child become?” For, indeed, the Lord’s hand was with him.

“They rejoiced with her.”  The ancients believed leprosy and childlessness were curses from God. Those who had lived with either one had a heavy load of guilt, condemnation, social ridicule, and received neither compassion nor mercy from the religious establishment.  Consequently, there was immense joy.  Not only was a son born by a miracle, but the curse was lifted.

“They were going to name him.” Jewish boys were more likely to be named after a grandfather than their father.[1]  Obviously, there was great surprise when Elizabeth and Zechariah indicated the child’s name would be John. It was a breach of tradition, as no one in either Zechariah’s or Elizabeth’s families had that name.

Parents named their boys on the eighth day during the rite of circumcision. If he was also given a Greek or common name, that name was used in daily conversation. However, for all religious activities, only the Hebrew name was used. For example, if a young man’s name was Moshe, then his common name would be Moses or Philip.[2] Infant girls were given their names when they were weaned from their mother.[3]

Often there were more boys in a family than there were grandfathers after which to name them.  In such cases, boys were often named after heroes of the Bible or Maccabean Revolt. An example is Simon Peter: His father probably named him in honor of the high priest Simon who sacrificed his life during the Maccabean Revolt. But Zechariah did not follow that popular trend either, and therefore, those present were all the more astonished when he said, “He will be called John.” The name John is derived from Jehohanan, which means Jehovah’s gift or God is gracious.[4] John, the gospel writer never refers to the Baptist as John the Baptist as do the other gospel writers, but only as John.

“They motioned to his father.” Zechariah became both mute and deaf as evidence by their motions. Priests served between the ages of thirty and fifty and could retire.  But some scholars believe that some priests may have served longer unless they had a physical defect, such as a defect in the voice.[5]  Most certainly this physical condition would have limited his temple service in some manner.  Evidently the people made signs to him because he also had lost his hearing. In the phrase “unable to speak” the Greek word kophos is used for speak but it could also be translated to as deaf.[6] When Zechariah wrote on a tablet that the child’s name would be John, he was obedient to God and the judgment that had fallen upon him some nine months earlier was lifted.

Common writing tables consisted of a wooden board, approximately 8 by 10 inches or somewhat larger, that was coated with wax.  The board had a small frame — like a picture frame – so when new hot wax was poured upon it, it would be confined to the wooden surface. After it cooled, students could write on the wax-coated board with a sharp stylus (an instrument similar to a large nail). When the message was no longer needed, the wax was melted and, when it again hardened, it was ready for another message.[7] 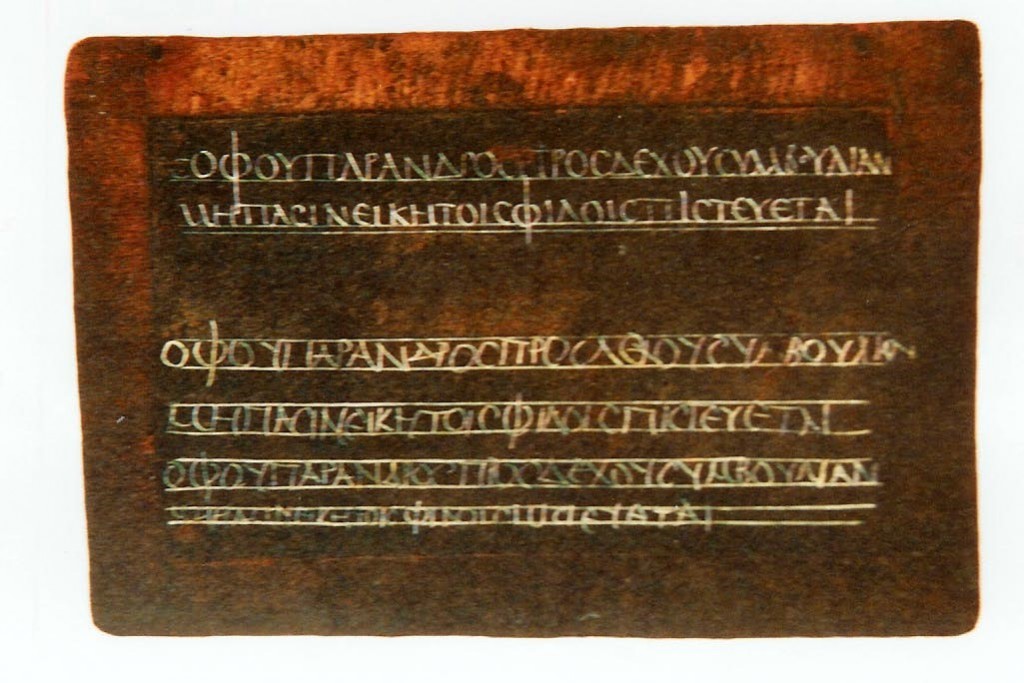 04.03.06.A. A COMMON WRITING TABLET. Tablets were constructed of a piece of wood and coated with wax. Writing was accomplished by scratching letters onto the wax surface with a stylus.  Photo courtesy of the Temple Institute, Jerusalem.

Knowing the date of birth for John the Baptist provides the only significant clue in determining when Jesus was born.  According to Luke 1:5, Zechariah belonged to the priestly division of Abijah. In a tradition established by King David (1 Ch. 23:1-2 ff.), who divided the land into twenty-four divisions, each division sent a delegation to the temple to minister to the Lord and to the people. As previously stated, every division served for a one-week period, twice a year, but all divisions were required to come to Jerusalem for the Feasts of Passover, Pentecost, and Tabernacles.[8]

The divisions served in chronological order according to the weeks of the religious calendar.  The first division was that of Jehoiarib (1 Ch. 24:7a) who served in the first week of the first month (Nisan), the second division of Jedaiah (1 Ch. 24:7b) served in the second week, etc. Nisan is the first month of the religious calendar year, as established by God in Exodus 12:2 (while Tishrei is the first month of the secular calendar). Zachariah belonged to the division of Abijah, which was the eighth division in accordance to David’s directive (1 Ch. 24:10b).  Allowing for the weeks when all twenty-four divisions served, Zechariah and his division of Abijah would have served in the tenth week.  Calculating time for the elderly priest to return home, the two weeks of required separation (Lev. 12:5; 15:19, 24-25), and counting forward nine months would have placed the birth of John the Baptist during the Passover festival.  The significance of this timing lies in the fact that during the Passover ritual, each Jewish family had, as is done today, an empty seat at the table waiting for the coming of Elijah.[9]  Since all seven Jewish festivals (technically, these are festivals of God, not the Jews) and in some manner each one points to an aspect of the life and ministry of Jesus. This calculation makes logical sense.