“Jesus was about 30 years old.”  Throughout the Hebrew Bible it was always believed that the age of 30 was the age when a man was mature enough to take on the responsibilities of God’s calling.  Note the following examples:

Jesus began His ministry when He was about the age of 30, although chronological studies indicate that He was probably about 32 or 34 years of age – clearly beyond the minimum age if anyone would ask. The reason is because He had to wait for John the Baptist to prepare the way for Him, and John had to wait until he was age 30.  Since the two were only six months apart, Jesus probably began His ministry at age 32 or 34.

“The son of Rhesa, the son of Zerubbabel.” The name Rhesa means “Prince” and is not a proper name.  Some scholars believe that it is highly doubtful that these two names represent two different generations, but that Zerubbabel was a prince.[1]

The genealogical records, which were housed in the temple, would become more significant after A.D. 70 when it was destroyed.  Related to this is an interesting letter written about the year 200 by Julius Africanus, a Christian from Emmaus.  He wrote to King Aristides at the house of Edessa informing the monarch that the half-brothers of Jesus had descendants living in the villages of Nazara, Cochaba, and elsewhere.  Fortunately, while the original letter has long been lost, it did not escape the watchful eye of Eusebius (265-340), who was one of the most significant early church fathers and historians. Eusebius noted the significance of family genealogies and the fact that the foreign Jewish people of the Lord (diaspora or desposyni) were deported, possibly due to conflict with the Romans.

A few however of the careful, either remembering the names, or having it in their power in some other way, by means of copies, to have private records of their own, gloried in the idea of preserving the memory of their noble extraction.  Of these were the above mentioned persons called desposyni (meaning Lord’s people)[2] on account of their affinity to the family of our Savior.  These coming from Nazara and Cochaba, villages of Judea to the other parts of the world explained the aforesaid genealogy from the book of daily records as faithfully as possible.

Eusebius also mentioned “the book of daily records” which included genealogical records. Regardless of the argument, the entire New Testament abundantly reports the genealogical record.[3] Furthermore, while some Christians may have argued the reliability of the genealogical record, at least one rabbi didn’t. Rabbi Ulla, of the third century identified Jesus as being from the lineage of David (“royal race”) and said,

“Jesus was treated in an exceptional way, because he was of the royal race.”

Over the years scholars have adopted three views on these two genealogical records. As is at times the case, some opinions may contradict. Note the following which includes a recent fourth viewpoint:

The issue of Joseph’s father, mainly – who was he – has been a joyful subject of critics. In Matthew 1:16 he is Jacob while in Luke 3:23 he is Heli. Could there have been more than one man in the life of Joseph?  Consider this:  According to the Levitical laws of Moses (Deut. 25:5 ff.) if  a man died without children, his brother must, if he is free to do so, marry his widow and children will be considered a heirs of the deceased brother or of the second husband.  Some scholars have suggested that Joseph’s mother was married twice and that Joseph was the son of Heli (second husband) but legally he was the son of the first husband who passed away. To add to the mystery, Heli and Jacob may have had the same mother, but Heli’s father is a descendent of David through Nathan while Jacob’s father is a descendent through Solomon. There seems to be no end to the many attempts to understand this mystery.[10] 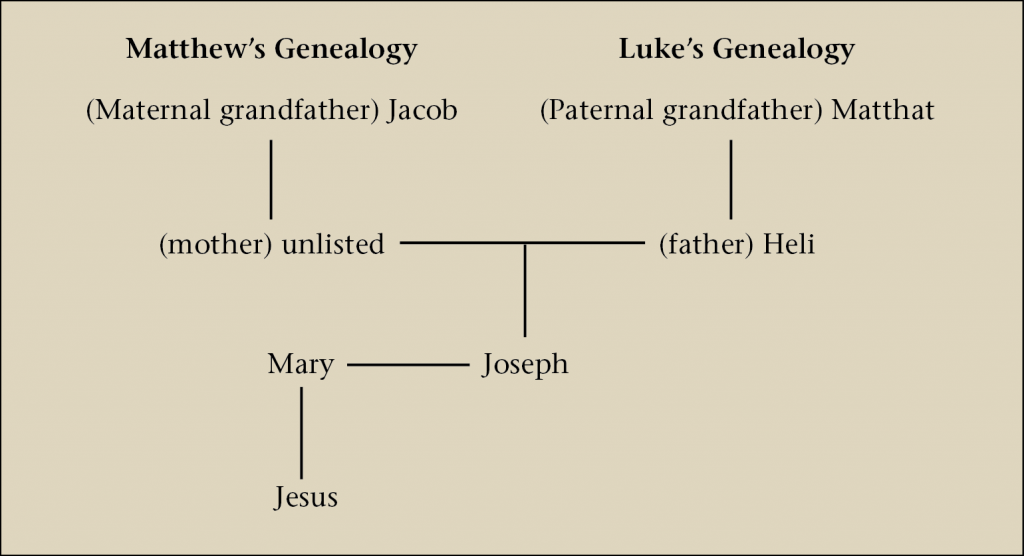 04.02.03.A GENEALOGICAL CHART OF MATTHEW AND LUKE. The two genealogies as shown are typical of the time. Sons were named “ben” or “bar,” meaning “son of” which was followed by the father’s name.  Courtesy of International Mapping and Dan Przywara.

While scholars have made many attempts to reconcile the parental issue of Mary and Joseph, this writer has not found a single commentary that suggests that the mother of Joseph was unlisted, as was often the custom, and the name of the maternal grandfather was. This chart could reveal the solution.

[2]. Parenthesis mine; Definition found in Pixner, With Jesus through Galilee. 18.

[4]. Geikie, The Life and Words. 1:555. Geikie claims this passage can be found in older unmutilated editions.

[5]. The interpretation that Luke’s genealogy is the real descent of Mary is not widely accepted today.  See note on Lk. 3:23-38 in the ESV Study Bible.

[10]. A. T. Robertson listed a number of interpretative possibilities in A Harmony of the Gospels. 261-263.