Pontius Pilate was the fifth prefect of Judea, appointed by Tiberius.[2] Although he was under the general supervision of the Roman legates in Damascus, he had considerable independence. The procurators lived in Caesarea but relocated to Jerusalem at times of various festivals to insure peace. Pontius Pilate (Lk. 3:1; 23:1) enjoyed the second longest reign of all the rulers of Judea. His longevity makes a positive statement to his administrative abilities, which have often been criticized by historians. While he was incredibly brutal and clearly blundered in some incidents as reported by the historians Josephus and Philo, the length of his reign would indicate that he was to some extent an able administrator.[3]

Years earlier Herod the Great began a ten-mile aqueduct to bring water from nearby Bethlehem to serve Jerusalem and the temple.[4]  However, he died before the construction was completed and lay dormant for more than two decades.  Josephus recorded that the task was continued by Pontius Pilate.  However, to finance it, Pilate plundered temple funds known as the “Corban” (Mk. 7:11),[5] which caused riots.  By the time Roman peace was restored many Jews had died.[6]  Josephus reports this confrontation:

But Pilate undertook to bring a current of water to Jerusalem, and did it with sacred money, and derived the origin or the stream from a distance of two hundred furlongs. However, the Jews were not pleased with what had been done about this water; and many ten thousands of the people got together, and made a clamor against him, and insisted that he should leave off that design.  Some of them also used reproaches, and abused the man, as crowds of such people usually do.  So he habited a great number of his soldiers in their habit, who carried daggers under their garments, and sent them to a place where they might surround them.  So he bade the Jews himself go away, but they boldly casting reproaches upon him, he gave the soldiers that signal which had been beforehand agreed to; who had laid upon them much greater blows than Pilate had commanded them … and there were a great number of them slain by this means, and others of them ran away wounded; and thus an end was put to this sedition.

However, the maintenance of the infrastructure of Jerusalem – the walls, water-channels, towers, storm sewers, maintenance workers and street sweepers[7] – were all paid for by the temple.[8] The irony is that when Pilate raided temple funds to complete the construction of the aqueduct, he essentially finished the work that the religious aristocrats should have done in the first place even though the project originated by Herod the Great.

Pilate either did not know the history of the Jewish-Roman relations in Israel, or he ignored them. In the early days of his administration, he abolished Jewish laws and established the symbols of Roman sovereignty.  He evidently was unaware of what had occurred nearly two centuries earlier when Antiochus IV Epiphanes attempted to abolish Judaism from Israel, and a revolt followed.  The account was recorded by Josephus:

But now Pilate, the procurator of Judea, removed the army from Caesarea to Jerusalem, to take their winter quarters there, in order to abolish the Jewish laws.  So he introduced Caesar’s effigies, which were upon the ensigns, and brought them into the city.

In response, the Jews met with Pilate and asked for reconsideration of the imperial proclamation. Josephus continues the lengthy description of the confrontation of nerves when suddenly the Jews found themselves surrounded by soldiers who had their swords drawn.  However, they did not retreat from their commitment.  According to Josephus who continued the story, they chose to throw …

Themselves upon the ground, and laid their necks bare, and said they would take their death very willingly, rather than the wisdom of their laws should be transgressed; upon which Pilate was deeply affected with their firm resolution to keep their laws inviolable, and presently commanded the images to be carried back from Jerusalem to Caesarea.

For whatever reason, Pilate had a gift of making horrible decisions that caused the Jews to riot or revolt. On another occasion he erected plain golden shields in his Jerusalem headquarters.  The Jews loudly protested these shields. He knew that Jews in Alexandria, Egypt had golden shields in their synagogues, so he could not understand why his subjects protested.[9] He refused to acknowledge that his subjects were far more orthodox that those in Egypt, and he appeared to care little about the results of his decisions. 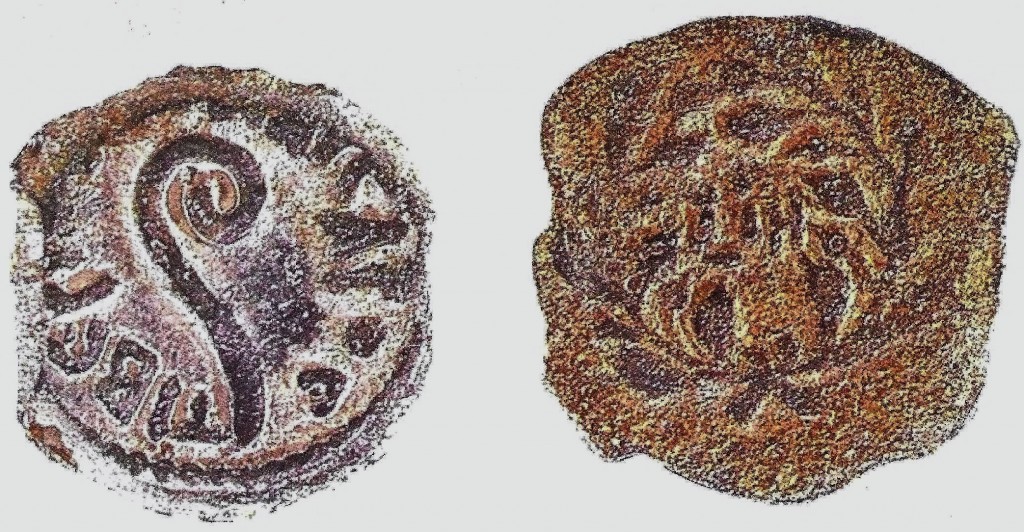 03.06.26.A. COINS OF PONTIUS PILATE. Two bronze coins of the same denomination minted by Pontius Pilate with a “litus” (bent staff), the symbol of his office and the name of Tiberius Caesar. It is notable that he did not place the symbol of a pagan deity on his coins as this would have caused a riot by the Pharisees (the Sadducees would not have cared very much).

[1]. Traditional scholarship has taught that Pilate was authorized by Rome to be the official procurator cum potestate, meaning he had full rights in civil, criminal, and military jurisdictions. However, in 1961 scholars discovered that this was an error, and that his proper title as “Prefect” or “Prefectus Judaea” (see 16.01.06.B). It has been suggested that beginning from the time of Emperor Claudius (reigned 41-54), the title of the ruler of Judaea was procurator.  Josephus and Tacitus who decades later wrote of Pilate used that title rather than his real one – praefectus, in Latin. Webb, “The Roman Examination and Crucifixion of Jesus.” 726.  Amazingly, of the procurators and prefects who ruled Judea, very little is known of any of them except for Pontius Pilate – and that is courtesy of Josephus and Philo. Without the writings of these two historians, the world would be starved for knowledge concerning the time of Jesus.

[2]. See Appendix 1 and related footnote concerning the proper title and title change of the ruler of Judaea.

[4]. See photo of Herod’s Aqueduct pipe at 09.03.08.A. According to author of Pseudo-Aristeas 90, the pipe was sealed with lead and lime mortar.

[7]. Since Jerusalem was considered to be a Holy City, the streets were swept every day, (Babylonian Talmud, Baba Metzia 26A and Pesahim 7A). The Valley of Hinnom had a dump site by the dung gate where all the filth was thrown, but generally picked up by others to fertilize their gardens. With the exception of rose gardens, gardens were not permitted in the city because they required dung (Mishnah, Maaseroth 2.5; Babylonian Talmud, Baba Kamma 82B). This illustrates to what measures the laws of purity were taken by the time of Jesus.