Since the time of Alexander the Great, the Greek kings had an unofficial policy of tolerance toward the Jews and their religion.  All villages and communities throughout the Greek Empire adopted the Hellenistic lifestyle with the exception of the Jews.  When Antiochus IV (215 – 164 B.C.), who changed his name to Antiochus IV Epiphanes (“Epiphanes” meaning, “the illustrious one” as well as “the manifest god”),[1] became king of the Syrian district, he changed the policy and was determined to make the little Jewish enclave conform to the rest of Greek society.

The Syrian Seleucid King Antiochus IV Epiphanes took control of Judah without a struggle. Before the Hasmonean rebellion, there was a strong absolute prohibition against war or even carrying weapons on the Sabbath.  Therefore, when Antiochus sent his general, Ptolemy Lagus, to capture Jerusalem, he did so on the Sabbath and there was absolutely no resistance. The Jewish prohibition of conflict on the Sabbath was so strong, that Josephus recorded that some priests decided not to fight on that day, and they were slaughtered.[2] When the Jews realized that their doctrine would be their annihilation, they decided they had to fight, even if it was on the Sabbath (1 Macc. 2:29-40).

Antiochus was undoubtedly the most significant character of the Inter-Testamental Period, as he left a lasting and horrific legacy.  Two apostate priests who competed against each other in various endeavors in the temple aided his evil schemes.[3]  The irony of biblical prophecy is that to fully understand the prophecy, it must be fulfilled (cf. 1 Cor. 13:12).  He was a brutal and vicious dictator, worse than Herod the Great in that he attempted to convert the Jews to the pagan Greek culture.  Those who refused were killed.  His lasting influence upon the Jews cannot be overstated, but unfortunately, is seldom studied. There is not so much disagreement on what the Bible says, but rather, on what it does not say.

Antiochus was determined to convert the Jews to paganism and remove any evidence of Jewish culture from the face of the earth.  His commander, Nicanor, advertised the sale of Jewish slaves throughout the Greek cities at the cheap rate of ninety “bodies” for only one talent.[4]

Jews in later generations were convinced that the Messiah would come after Antiochus, an interpretation they based on the prophecies of Daniel.  But their difficulty with that interpretation is how to solve the “sevens” the prophet Daniel mentioned.[5]  It was resolved with a figurative interpretation rather than a literal understanding.  Then as the years went by after the defeat of Antiochus there was an increased expectation that the Messiah would come.  Therefore, the horrific actions of the king and the divine intervention during the Maccabean Revolt that followed are significant in understanding the expectations of the Jews in the time of Christ.

03.04.17.A. COIN OF ANTIOCHUS IV EPIPHANES. LEFT: The image of Antiochus IV (ruled 175-164 B.C.) RIGHT: Olympus Zeus is seated, holding Nike. Some coins depicted him as “god manifest” which was offensive to the Jewish people. The fact the he considered himself to be “the God” is evident from his coins. Internet Photograph.[6]

Antiochus was a man who desired absolute power and wealth. He controlled Judah as it was the land bridge with critical international highways. This provided him with an important source of revenue: taxation of traveling caravans.  His greed inspired him to pass over the rightful successor to the throne, Seleucus Philopator, and ushered in an era of immense pain and suffering for the Jewish people in his attempt to destroy the Jewish faith and replace it with Hellenistic philosophy. He brought forth the “abomination of desolation” with a dozen major points that were recorded in the books of Maccabees in the second century B.C.:[7]

The Roman senator and author Publius Cornelius Tacitus (A.D. 56 – 117) recorded an account of Antiochus and the chaotic political environment in his book titled, Histories.[9] Tacitus said that after Antiochus, the Jewish leaders, later known as Sadducees, established their own “princes” who were nearly as brutal as some of their pagan monarchs. They certainly lacked the biblical qualities and values of leadership.

When the Macedonians became supreme, King Antiochus strove to destroy the national superstition, and to introduce Greek civilization, but was prevented by his war with the Parthians from at all improving this vilest of nations; for at this time the revolt of Arsaces had taken place. The Macedonian power was now weak, while the Parthian had not yet reached its full strength, and, as the Romans were still far off, the Jews chose kings for themselves. Expelled by the fickle populace, and regaining their throne by force of arms, these princes, while they ventured on the wholesale banishment of their subjects, on the destruction of cities, on the murder of brothers, wives, and parents, and the other usual atrocities of despots, fostered the national superstition by appropriating the dignity of the priesthood as the support of their political power.

When Tacitus referred to the “national superstition” of the Jews, he meant the Jewish religion. Romans, Greeks and all other pagans could not understand how anyone could worship an invisible god. Furthermore, the non-Jews had difficulty with the Jewish people not working one day of the week, as well as their dietary restrictions. To them, this religious lifestyle was clearly superstitious.

Another writer of history, Polybius (200  – 117 B.C.), used a play on words in his description of Antiochus. Since Antiochus gave himself the last name, Epiphanes, meaning he was the bodily manifestation of a god, Polybius played with that name and referred to him as Epimanes meaning mad, or Antiochus the insane.[11]

Antiochus Epiphanes, nicknamed from his actions Epimanes, “The Madman,” would sometimes steal from the court, avoiding his attendants and appear roaming wildly about in any chance part of the city with one or two companions.

Among the other evils this dictator invented was the creation of a myth known as “Blood Libel” that would haunt the Jews into the twentieth century. According to Flavius Josephus, Antiochus essentially said in order for the Jews to fulfill their required ritual laws,

That they used to catch a Greek foreigner and fatten him thus up every year and then lead him to a certain wood pile, and kill him, and taste of his entrails, and make an oath upon this sacrificing a Greek, that they would ever be at enmity with the Greeks; and that they threw the remaining parts of the miserable wretch into a pit.

Variations of this myth caused persecutions and martyrdom for the Jews at the hands of so-called Christians throughout the Church Age.  It was a popular slander in Nazi Germany and is taught as historic fact in Islamic countries today.

Antiochus is credited for grouping various Greek cities into ten districts for administrative and taxing purposes.  These became known as the “Decapolis cities” by the time of Jesus as the Greek name poleis means cities.  They were Seleucia, Galaditis (Transjordan) and Beit She’an (Scythopolis) in northern Israel. The towns or cities east of the Jordan River are Damascus, Philadelphia (Amman), Rafna, Garada, Sussita (Hippos), Dion, Pelia (Pella), Jerash (Gerash), and Canatha. The historian Gaius Plinius Secundus (A.D. 23 – 79), better known as Pliny the Elder, in his work titled Natural History, listed the ten as: Damascus, Philadelphia, Raphana, Scythopolis, Gadara, Hippos, Dium, Pella, Canatha, and Gerasa.[13] However, another historian Claudius Ptolemy (A.D. 60-168), wrote in his book titled Geography, a different list of names.[14] Clearly, the ancients had different opinions of what they considered to be a district, city or village. While the number of cities is uncertain,[15] it is known that there were ten administrative districts for military and tax purposes, which were instituted by Pompey in 63 B.C.[16] 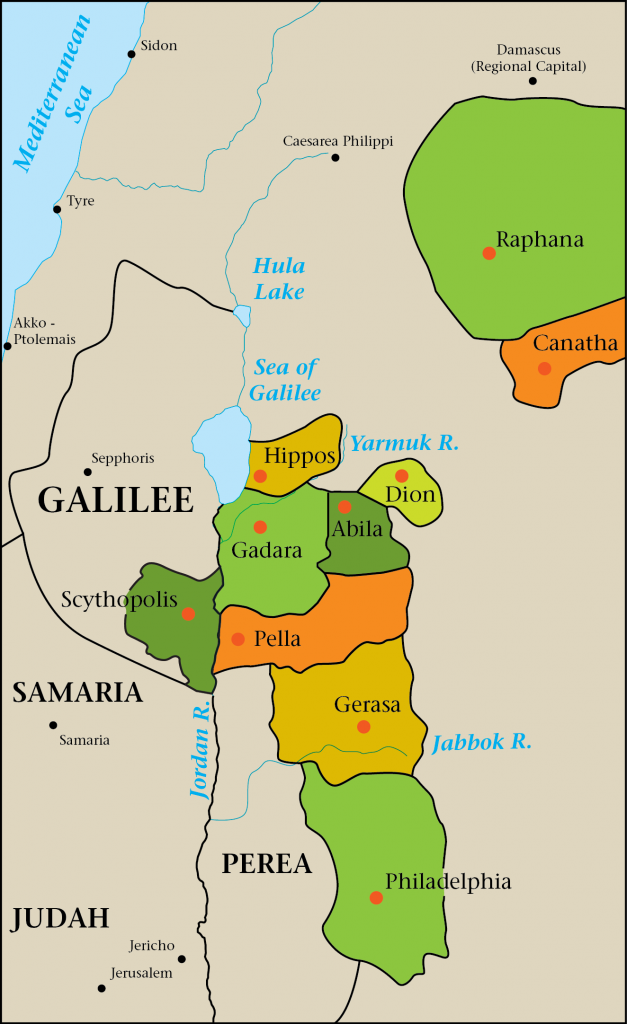 03.04.17.Z MAP OF THE REGIONS OF THE DECAPOLIS CITIES.  The Decapolis Cities, designated with the red dot, were administrative capital cities established by the Greeks. Courtesy of International Mapping and Dan Przywara.

[2]. Josephus, Antiquities 12.6.2 (271-77). Josephus received his information from Agatharchides of Cnidus, who lived in Alexandria in the second century B.C.; Oppenheimer, “Oral Law in the Books of Maccabees.” 34.

[9]. This book The Histories, is not to be confused with another historical work by Tacitus titled The Annals of Imperial Rome.

[12]. Polybius authored The Histories of Polybius, a/k/a The Histories, which describes the rise of the Roman Republic to a world power between the years 264-146 B.C.