11.02.05 STERN WARNING ABOUT CAUSING OTHERS TO SIN

STERN WARNING ABOUT CAUSING OTHERS TO SIN

Mt. 6 “But whoever causes the downfall of one of these little ones who believe in Me – it would be better for him if a heavy millstone were hung around his neck and he were drowned in the depths of the sea!

7 Woe to the world because of offenses. For offenses must come, but woe to that man by whom the offense comes.

Mk. 43 And if your hand causes your downfall,

It is better for you to enter life maimed

than to have two hands

and go to hell – the unquenchable fire,

45 And if your foot causes your downfall,

It is better for you to enter life lame

than to have two feet

and be thrown into hell –

47 And if your eye causes your downfall,

than to have two eyes

and be thrown into hell,

49 For everyone will be salted with fire. 50 Salt is good, but if the salt should lose its flavor, how can you make it salty? Have salt among yourselves and be at peace with one another.”

While Scripture is adamant about not causing others to fall into sin, Jesus is profoundly strong on those who cause children and others who are young in the faith to fall. To emphasize this, He uses repeating concepts, ideas, and phrases as a learning tool.  Note that verses 44, 46, and 48 in Mark are identical. The triple repeat was a literary device to express maximum concern and impact to the reader and listeners.

“But whoever causes the downfall of one of these little ones.” The consequence of causing emotional, spiritual, or physical injury to children is immense. Jesus said it would be better for a millstone to be around their neck and to be thrown into the sea. (The bottom of the Sea of Galilee was also known as the Abyss, where legend said the demons lived.)  In effect, Jesus said that if anyone caused a little child to sin, it would be better for him to be thrown into the lake of demons than to receive judgment on Judgment Day.

The passaged continues to say that it would be better if that person had a “heavy millstone” around his neck and tossed into the sea.  At this time there were two kinds of millstones:[4]

Jesus used the term of the larger millstone as He emphasized anger and judgment on those who would willfully cause injury others. It was a common phrase in the ancient world.  For example, when Emperor Augustus punished some slaves, he could have had them crucified or fed to the lions.  But rather, he had heavy stones (not mill stones) tied to their necks and tossed in the river.  The ancient writer Suidas quoted Aristophanes[5] as having said,

Lifting him up, I’ll plunge him to the deep

A stone around his neck.

As stated previously, the Master Teacher used the common language and ideas of the people to convey His message.

“Woe to the world.”  Dire judgment is coming not only to these “false shepherds,” but also to those who follow them. The phrase woe, which in Greek is ouai, refers to both anger and sorrow.[7] It is a funeral dirge; a lament for the dead.[8] Scholars have two interpretations to this statement: 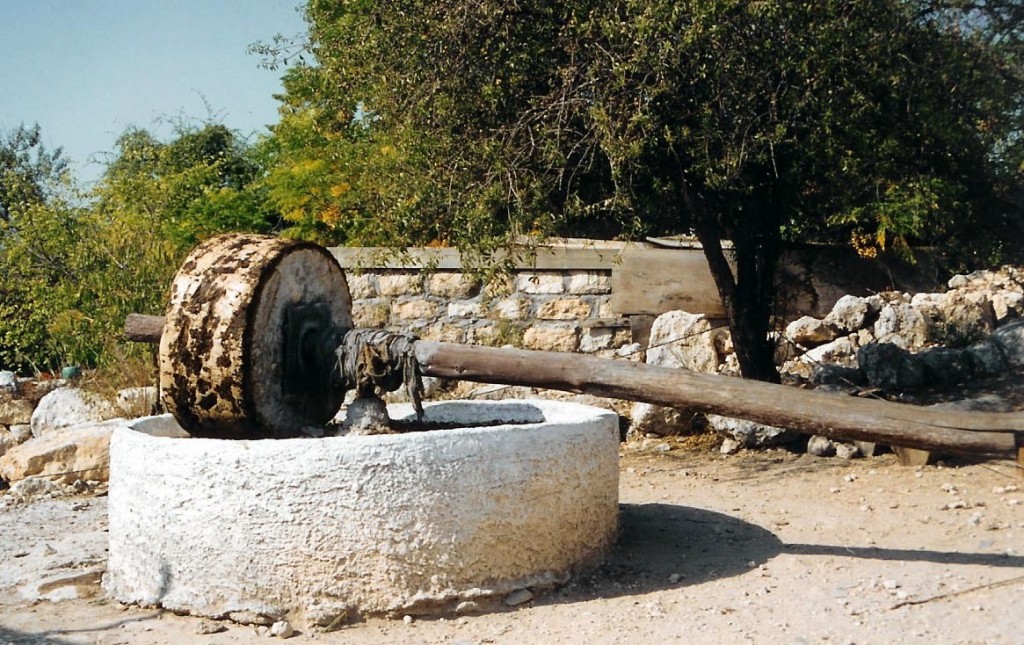 11.02.05.A. A MILLSTONE.  A millstone was a large circular stone, a rotary crusher that was used for crushing olives that would then be placed in an olive press. The stone was about four or five feet in diameter with a beam through its center. At the other end of the beam a slave, mule, or donkey was tied in order to turn the stone in a circular motion, thereby crushing the olives. After the olives were crushed, they were squeezed under immense pressure in a beam olive press (15.02.01.B) Photograph by the author.

“Gouge it out.” This statement is not a teaching of self-mutilation, but is a figure of speech known as hyperbole;[11] a deliberate exaggeration to emphasize the point that drastic measures need to be taken to remove sin. Jesus said that nothing is to tempt the believer and have him fall into the eternal lake of fire.

“Salt is good.”  The followers of Jesus are to be like salt, a preservative in society.[12] However, critics have said that salt is a chemical compound and, therefore, cannot lose its saltiness.  While this is true of ocean salt, it is not true of salt derived from the Dead Sea, which is ten times saltier than the ocean or Mediterranean Sea. Dead Sea salt was used in the temple and for the salting of dried fish along the shores of the Sea of Galilee.  Dead Sea salt can lose its concentration and, therefore, lose its savory quality.  Pliny the Elder noted that Dead Sea salt could quickly become worthless.[13]  Jesus was obviously not speaking of ocean salt, but of Dead Sea salt.

Furthermore, Dead Sea salt did not come from the sea itself, but was removed from the salt mountain (that is 98% pure) located at the southwestern side of the sea.  At times as it was being shipped in or near Samaria, the Samaritans contaminated it by throwing dirt on it.  This changed the taste of the precious commodity and rendered it useless.

[1]. A reference to eternal punishment for rebellion against God.

[2]. A reference to eternal punishment for rebellion against God.

[3]. A reference to eternal punishment for rebellion against God.

[5]. Aristophanes (446 – 386 B.C.) was a Greek dramatist some literary historians say was one of the greatest Greek comedy writers. Most of his 40 writings are lost, but a certain Suidas quoted him in Equites of Aristophanes.