1 In those days there was again a large crowd, and they had nothing to eat. He summoned the disciples and said to them, 2 “I have compassion on the crowd, because they’ve already stayed with Me three days and have nothing to eat. 3 If I send them home hungry, they will collapse on the way, and some of them have come a long distance.”

4 His disciples answered Him, “Where can anyone get enough bread here in this desolate place to fill these people?”

5 “How many loaves do you have?” He asked them.

6 Then He commanded the crowd to sit down on the ground. Taking the seven loaves, He gave thanks, broke the loaves, and kept on giving them to His disciples to set before the people. So they served the loaves to the crowd. 7 They also had a few small fish, and when He had blessed them, He said these were to be served as well. 8 They ate and were filled. Then they collected seven large baskets of leftover pieces. 9 About 4,000 men were there. He dismissed them 10 and immediately got into the boat with His disciples and went to the district of Dalmanutha.

The miracle Jesus performed in the western side of the Sea of Galilee was replicated on the eastern side.  Jesus was now in the heart of the Gentile area, not far from the eastern side of the Sea of Galilee near the area when He had healed the demoniac. He had already become a sensation in the eastern Mediterranean area, as evidenced by people coming to Him from many areas. Previously, when Jesus healed the demoniac, the community asked Jesus to leave when they realized their herd of 2,000 pigs drowned in the Sea of Galilee. Since then the former demoniac had become a local evangelist, and told everyone what they had already heard concerning this man called Jesus and the miracles He was performing. Therefore, many Greek Gentiles came to hear Him, including some who had previously asked Him to leave. 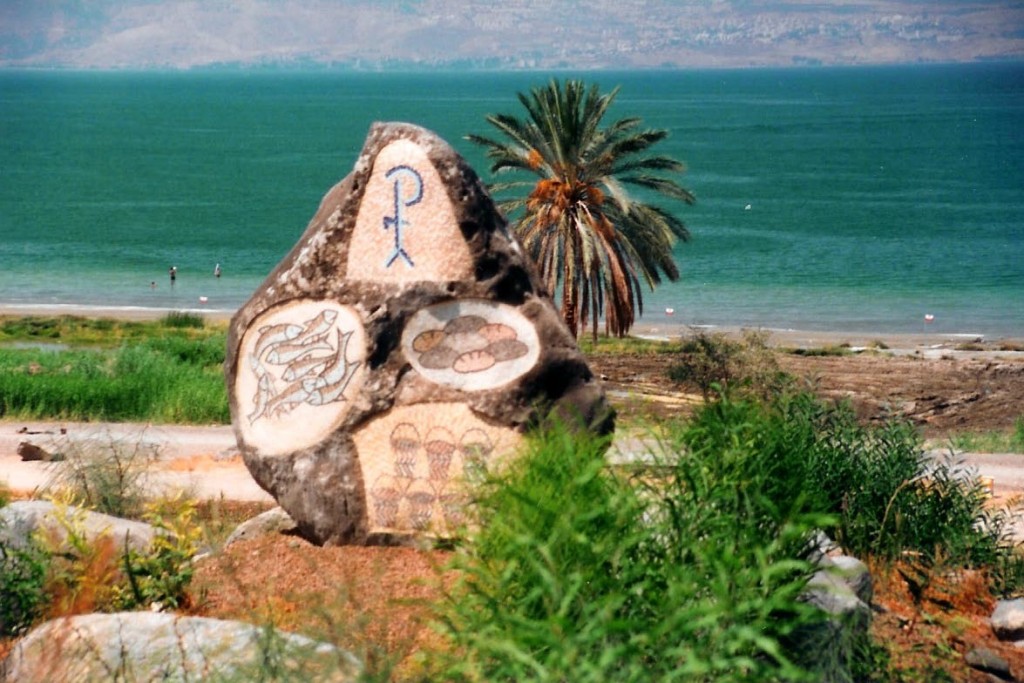 10.01.26.A. A MEMORIAL TO THE FEEDING OF THE 4,000.  Shown is a memorial to Jesus for feeding 4,000 men, plus their families along the northeastern shore of the Sea of Galilee.  These people were primarily from the Decapolis cities. Because of His reputation, sick people traveled great distances to be healed by Him.  Photograph by the author.

The memorial (above) to honor the miracle by Jesus is located on the eastern shore of the Sea of Galilee where it does not interfere with various agricultural and commercial enterprizes. The exact location of the miracle is still debated, but there is little doubt that it closer to the northeast end of the Sea. The fact that Mark said in 7:31, that Jesus went into the borders of the Decapolis suggests that He went to or possibly slightly inside the borders, but not deep into the Greco-Roman region.[1]

“A few small fish.” The fish have been generally identified as barbel fish, a small fish described in Matthew 15:34.  The fish may also have been of the sardine variety, as the Sea of Galilee is the only fresh water lake to have fresh water sardines.[2]  This miracle and the feeding of the 5000 was reminiscent of the great prophet Elijah who multiplied the last bit of flour and oil for a widowed woman and her son who were about to starve to death (1 Kgs. 17:12-15).  While the prophet of yesteryear was well remembered for his miracle, what Jesus did twice not only outshone what the prophet did, but also played on the words that He was the “Bread of Life.”  Jesus again demonstrated that He had all the attributes of the God of Abraham, Isaac, and Jacob. In this case, He functioned as Jehovah Jirah – our Lord God who is our Provider.[3]

Mosaic designs of baskets filled with bread and fish have been found at Kursi in a Byzantine church. The site of this miracle has become a subject of debate in recent years. There is strong evidence to suggest it occurred near the ruins of the ancient Kursi church, not far from where the swine ran down the hill and into the water.  The two miracles of multiplication were so profound to the early church, that the Last Supper was observed with bread, wine, and fish.[4]

When the miracle was over and everyone had eaten as much as they wanted, they had enough leftovers to fill “seven large baskets.” The Greek word for “basket” in this passage is spuridas or sphurides, which is a vessel large enough to hold a person (cf. Acts 9:25).[5]  The amount of bread that was left over was massive, enough for hundreds of people. This basket was huge compared to the twelve smaller narrow-necked, flask-shaped baskets, called kophinos, that were filled at the feeding of the 5,000.[6]

Again, as in the feeding of the 5,000, there is a significance that reaches beyond the multiplication that produces seven baskets of leftovers.  These people were descendants of the seven nations that were removed from Canaan by Joshua.[7] The seven baskets full of bread are symbols for the seven Canaanite tribes, the Gentiles. With a silent message, Jesus demonstrated that He was the abundant Bread of Life to all nations.

“Went to the district of Dalmanutha.” Two names for a geographical location were not uncommon, as was the custom that some men had two names.  Matthew called this site by the Hebrew name of Magadan (15:39) while Mark called it by the Aramaic name of Dalmanutha,[8] meaning, the place of widowhood.[9] This fishing village along the Sea of Galilee was the site of a great sea battle between the Romans and Jewish Zealots during the Jewish War (A.D. 66-70). The Jews thought they could escape from the Romans in boats but were horribly wrong.[10]  Tourists today visit this historic site, which is known as Kursi.

[3]. See “Jesus, the Fulfiller of Selected Names of God” in Appendix 32 for additional attributes; Evans, Praying the Names of God. 123-24.

[9]. Lightfoot, A Commentary on the New Testament from the Talmud and Hebraica. 1:242.