Mk. 24 He got up and departed from there to the region of Tyre and Sidon. He entered a house and did not want anyone to know it, but He could not escape notice. 25 Instead, immediately after hearing about Him, a woman whose little daughter had an unclean spirit came and fell at His feet. 26a  Now the woman was Greek, a Syro-phoenician by birth, and she kept asking Him…

Mt. 22b “Have mercy on me, Lord, Son of David! My daughter is cruelly tormented by a demon.”

23 Yet He did not say a word to her. So His disciples approached Him and urged Him, “Send her away because she cries out after us.”

24 He replied, “I was sent only to the lost sheep of the house of Israel.”

26 He answered, “It isn’t right to take the children’s bread and throw it to their dogs.”

27 “Yes, Lord,” she said, “yet even the dogs eat the crumbs that fall from their masters’ table!”

28 Then Jesus replied to her, “Woman, your faith is great. Let it be done for you as you want.” And from that moment her daughter was cured.

This narrative parallels the account of the Gentile centurion (Mt. 8:5-13) and, like the centurion, her attitude is completely opposite of the religious leaders in Jerusalem. But amazingly, the response by Jesus appears to be totally out of character – cold-hearted at best. Obviously the gospel narrative does not reveal the entire story, so readers are left to ponder why Jesus responded in this manner.  Two possibilities have been offered:

As the story concludes, it appears evident that she certainly did discover the real Jesus, and the disciples witnessed His compassion upon a hated people group.

Matthew called her a “Canaanite woman” while Mark referred to her as a “Syrian-Phoenician” woman.  There is no discrepancy as the Syrian-Phoenicians were a sub-group of the Canaanites.  These people, like the Jews, were of Semitic origin and, therefore, their languages were similar.  Therefore Jesus could converse with her.[1]

According to Matthew’s genealogy, one of his ancestors is Rahab, a prostitute of Jericho at the time of Joshua’s conquest (Jos. 2).  Jericho was part of the larger Canaanite people group. His journey into Gentile areas began the fulfillment of Isaiah 49:22, that is, a call to the Gentiles.

It should be noted that the city of Tyre was within the ancient tribal area of Asher, but it was not included in the land of Asher.  Historically, it was a Canaanite city that eventually became a Greek city.  By this time, Jesus made His second withdrawal into Gentile areas, and He did this for these reasons:

While Jesus was interested in bringing salvation to the Gentiles, He was first going to fulfill the promise that Abraham would be a blessing to all the people of the world (Gen. 12:3). This blessing would begin with all the Gentiles and Jews who lived within the Promised Land (Gen. 17:8). Therefore, Jesus traveled beyond the borders of the three Jewish provinces of Galilee, Perea, and Judea and into the lands promised to Abraham.  He did not, however, travel beyond the borders of the Abrahamic Covenant.

“The region of Tyre and Sidon.”  There is no record that Jesus went into the cities, but to the regions. Specifically where He traveled in these areas is unknown, although the roads He walked on retrace the military march of Tiglath-Pileser III of ages past.[5] But what is known, is that Jewish people lived throughout the Roman Empire, including Tyre, Sidon, and the Decapolis cities.

Josephus provided a lengthy description of this region indicating that it covered a vast expanse between the Mediterranean Sea and the Jordan River north of the Sea of Galilee.[6] It was there that Jesus again demonstrated His healing power and taught the principles of the Kingdom of God – the concept that the God of Abraham, Isaac, and Jacob desires to rule in the hearts of all men.  These Gentile people were of Canaanite descent and worshiped a number of deities, including Ashtaroth, Baal, Beelzebub, the chief god of Tyre, and Eshmun (or Eshmoun), the Phoenician god of healing who was considered to be the “holy prince” of Sidon. Their forefathers practiced child sacrifice and often led the Israelites into sin.  Now the God of the Israelites was among them, teaching them the principles of the Kingdom of God with power and glory. 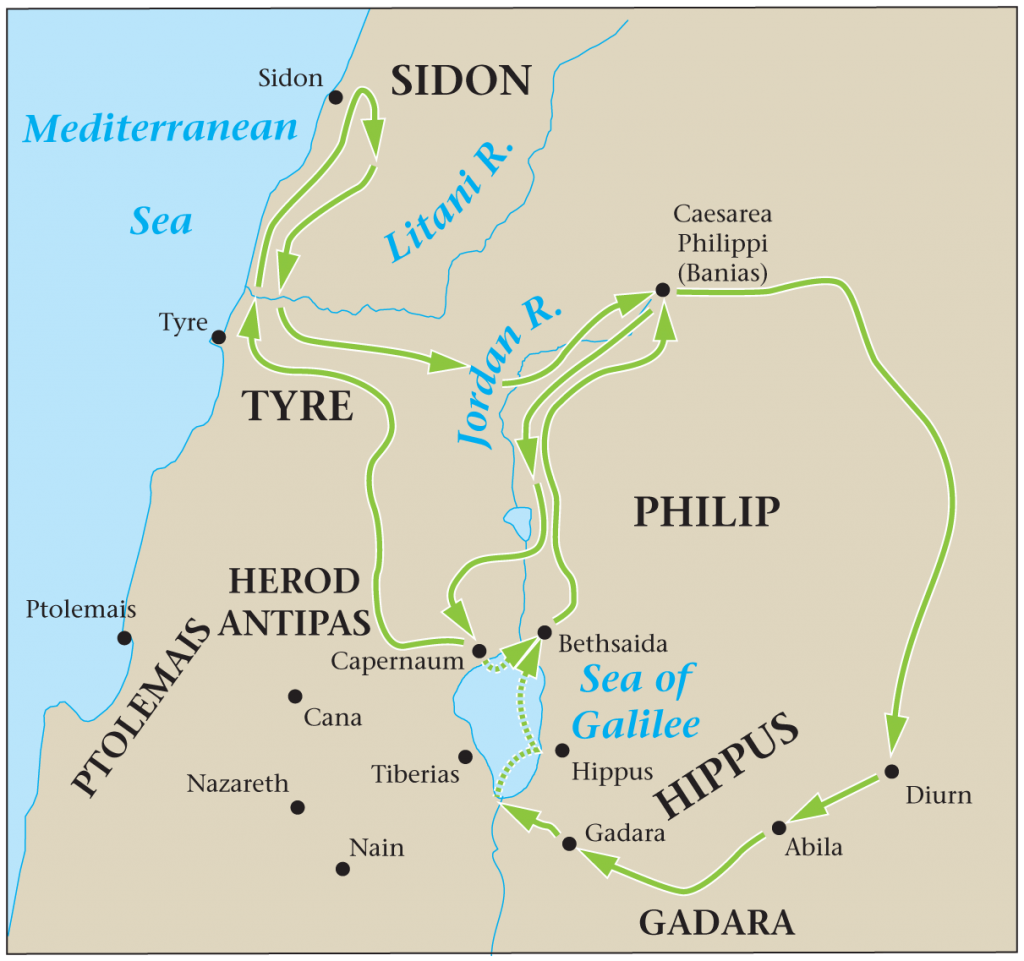 10.01.23.Z. MAP OF THE TRAVEL ROUTE OF JESUS THROUGH THE DECAPOLIS. Map of Jesus’ visit to Tyre, Sidon and Caesarea Philippi. While His early ministry was focused upon the Jewish people, in due time He included the Gentiles. Courtesy of International Mapping and Dan Przywara.

“Syro-Phoenician” Mark gave a clear geographical description so his readers would not confuse it with Libya-Phoenicia along the North African coast.  Today Syria-Phoenicia is known as Lebanon and is under Syrian control while Libya-Phoenicia is part of Libya.[7]  This narrative gives a clear understanding that Jesus was concerned about the Gentiles.

“Lord, Son of David.” The woman addressed Jesus with a double Messianic title, but it offended Him. Why? These words were spoken by a Gentile woman, who was from the ancient Canaanite tribes, and Jesus was not her Lord.  She was speaking to him as if she were a Jewess.  In today’s counterpart, it would be as if a foreigner called the President of the United States “My President.” In the ancient world, her address was totally inappropriate.  Therefore, it was not right for this Canaanite woman to address Jesus as, “Lord, Son of David.”

“I was sent only to the lost sheep of the house of Israel.”  The difficulty with this statement is that if Jesus was truly sent only to Israel, why was He outside of the country?  The passage would be better translated to say that He was sent primarily to the Jews.  Yet while in the land of the Gentiles He did not give away His healing gifts lightly.  He wanted to illustrate to the Jews that the Gentiles were desirous of the blessings of God. It was not that Jews were more important than Gentiles, but that since the covenant of God was made with Abraham, the father of the Jews, it was only proper protocol that salvation be offered first to the Jewish people.  That does not diminish the significance of a lost Gentile soul; Jesus died for everyone. Romans 2:11 states that “God does not show favoritism,” but God does all things in order.

“It isn’t right to take the children’s bread and throw it to their dogs.”   The word “children” is a reference to the descendants of Abraham, the Jews, whereas the common word “dogs” refers to the Gentiles.  Ordinary street dogs were straggly animals that roamed from rubbish heap to rubbish heap. The Jewish people referred to Gentiles as this kind of dog.

However, the word the woman used for dogs is kunaria, which is not a straggly street dog but an affectionate household pet.[8] There is a huge difference between the two.[9]  To call someone a straggly street dog was an insult that could have been potentially deadly. Therefore, the conversation did not have a tone of aggression, but a plea of kindness.  The woman probably had a kunaria because at this time people did not have silverware as is common today.  When eating they took food from a common bowl with a piece of bread wrapped in the palm of the hand.  When finished eating, the bread was tossed to the kunaria.[10] She noted that family pets receive the benefits of the crumbs from the master’s (Mt.) or children’s (Mk.) table; suggesting that she should receive the benefit from the Jewish messiah.[11]

Jesus came to bring the gospel first to the Jews in fulfillment of the promises of the ancient Hebrew prophets.  These words that appear to be offensive today were not considered as such in the first century.  When the Jews began to reject the gospel, Jesus took the message of His kingdom to the Gentile world.  He said that people are to worship Him in truthfulness. It was this issue at which the Canaanite woman failed; she did not address Him in truthfulness, yet she had faith in Him for the healing she desperately needed. Jesus is not a respecter of persons, but He is a respecter of attitudes and motives.

[3]. This writer is grateful to his professor, the late Dr. Anson Rainey, who passionately translated various ancient texts in various languages in order to better understand the Bible in its context. See  Rainey and Notley. The Sacred Bridge. 229-33.