TRADITIONS OF THE ORAL LAW CONDEMNED

1 The Pharisees and some of the scribes who had come from Jerusalem gathered around Him. 2 They observed that some of His disciples were eating their bread with unclean —that is, unwashed — hands. 3 (For the Pharisees, in fact all the Jews, will not eat unless they wash their hands ritually, keeping the tradition of the elders. 4 When they come from the marketplace, they do not eat unless they have washed. And there are many other customs they have received and keep, like the washing of cups, jugs, copper utensils, and dining couches. ) 5 Then the Pharisees and the scribes asked Him, “Why don’t Your disciples live according to the tradition of the elders, instead of eating bread with ritually unclean hands?”

6 He answered them, “Isaiah prophesied correctly about you hypocrites, as it is written:

These people honor Me with their lips,
but their heart is far from Me.
7 They worship Me in vain,
teaching as doctrines the commands of men (Isaiah 29:13).

8 Disregarding the command of God, you keep the tradition of men.” 9 He also said to them, “You completely invalidate God’s command in order to maintain your tradition! 10 For Moses said:

11 But you say, ‘If a man tells his father or mother: Whatever benefit you might have received from me is Corban’” (that is, a gift committed to the temple), 12 “you no longer let him do anything for his father or mother. 13 You revoke God’s word by your tradition that you have handed down. And you do many other similar things.”

The gospel of Mark was written to Roman believers who were not familiar with Jewish customs.[1] Therefore, he explained that the Jews confronted Jesus because they had placed their traditional rites and laws in a position superior over the written Scriptures.  This is revealed in the Talmud that states these words, “My son, give more heed to the words of the Rabbis than to the words of the [written] law.”[2]

Some issues of the Oral Law were hotly debated. Various issues such as hand washing were argued between two schools of theological interpretation: The School of Hillel and the School of Shammai.  The Pharisees did not question Jesus or His disciples in regard to their conformity to the sacred Scriptures, but with regard to their Oral laws and traditions. Here Jesus dealt His heaviest blow to the Oral Law, not that the entire Oral Law was evil, but major portions of it made the Mosaic Law void. The leading Pharisees could not tolerate Jesus giving them counsel on any matter.  In their opinion, since Jerusalem was the seat of the Sanhedrin, the city was considered the seat of all knowledge.

“From Jerusalem.”  Herod the Great had restricted the legal authority of the Sanhedrin to the province of Judea.[3] Hence, when Jesus was anywhere else, they sent delegates from Jerusalem to observe and question Him.

“His disciples were eating their bread with unclean — that is, unwashed — hands.”  The subject of cleanliness was commanded in Leviticus 11-15 and Numbers 5:1-4 and 19.  However, the ritual required by the rabbis was not a biblical requirement, but a rabbinic creation. According to them, so serious was the matter of hand washing, that those who failed to wash properly were said to be subject to the attack or influence of a demon named Shibta.[4]  This ritual was to illustrate the purity of one’s life, but Jesus pointed to the fact that, while they observed the legalistic ritual, their lives were corrupt.

An example concerning this kind of ritual is found in the life of Eleazar ben Enoch that illustrates how passionate the Pharisees were about this matter. Enoch was known to oppose the washing of hands and his peers condemned him for it. In fact, after his death he was immediately excommunicated (in essence, condemned to hell).  The Mishnah provides this interesting account:

Eleazar ben Enoch, because he threw doubt on [the teaching of the sages concerning] the cleansing of hands and when he died the court sent and laid a stone on his coffin; whence we learn that if any man is put under a ban and dies while yet under the ban, his coffin must be stoned.

The custom of washing may have begun with Solomon when he washed his hands prior to a sacrificial offering.[6]  However, the earliest written evidence of this ritual washing is found in the Sibylline Oracles, written in 160 B.C., about five years after the Maccabean Revolt when the temple was cleansed.  Speaking highly of those who ruled the temple, the writer said they were men who:

At dawn they lift up holy hands toward heaven, from their beds, always sanctifying their flesh with water.

Since the resurrection of Jesus, the gospel continues to spread to both the Jewish and Gentile people. No longer are believers to be separated from pagan cultures per se, but they are to be a force for change, bringing the Kingdom of God to those who do not know Jesus.

“From the marketplace.”  The marketplace was filled with Jewish and Gentile merchants and, therefore, the area was ceremonially unclean.  The washing of hands and food was not for physical cleaning, but for ritual-religious purposes.[9]   The washing of hands was a well-established practice (2 Kg. 3:11) and was connected with prayers of thankfulness.[10]  Verses 3 and 4 are parenthetical in that the gospel writer Mark inserted them to explain Jewish customs to a Gentile audience.

“The tradition of the elders.”  This phrase is clearly referred to as the Oral Law.[11] In this passage Mark identifies some of these traditions (verses 3-5, 7-9, 13) and the Apostle Paul made a parallel comment in Colossians 2:8, 22.[12] The Mishnah has some thirty chapters devoted to the cleansing of various vessels and hands, and reflects the excessive compulsion the Jews had for ritualistic cleanliness.[13]

“You completely invalidate God’s command in order to maintain your tradition!”  Jesus delicately confronted His accusers with sarcastic irony[14] when He distinguished the contrast between the commands of God and the traditions of men. The religious leaders, however, had this command reversed.  Instead, they said,

It is more worthy of punishment to teach against the ordinances of the scribes than against the Torah itself.

The Mishnah phrase describes precisely what Jesus meant – the leading Pharisees held their laws, and the violation of breaking them, in higher position than their Bible. This was the basis for nearly all conflicts between Jesus and His adversaries. Traditions that support the Bible and benefit mankind have always been considered good and useful.  Yet Christianity has developed its own traditions (1 Cor. 11:2; 2 Thess. 2:15).

“Corban.” (Gk. korban 2878; Heb. qorban). The word means dedicated to God, set aside for God, or dedicated to God.[15] In this narrative, the Corban is money that was officially given to God, for various uses, but the person who dedicated the money actually retained it.[16]  Jesus was concerned about priorities.  In this discussion (7:1-13) He had a disagreement with the leading Pharisees concerning the Mosaic Law and the Oral Law.  More specifically, the law forbade the giving of dedicated money for parental support to the temple.

In biblical Judaism, the highest human duty was to honor and respect one’s parents.[17] Resources that were to be used for the support of one’s parents were “dedicated to God,” and therefore, no one else could use them – but the original owner could still use them and not care for his parents.[18]   In essence, the leading Pharisees created a way to circumvent the biblical law by making a Corban vow but neglected the commandment to honor father and mother, which included financial support in their later years.[19] As previously stated, the leading Pharisees broke some of the Mosaic laws by creating their own religious traditions that were held in higher priority.  In this challenge, Jesus declared war on the Oral Laws and those who supported them.

The Corban became famous in history because Josephus recorded that Pontius Pilate at one time raided the temple treasury and stole the Corban. He used the funds to complete the aqueduct system that supplied water to the temple. It was one of the construction projects that had remained unfinished after the death of Herod the Great.[20]

10.01.20.A. THE REMAINS OF PILATE’S AQUEDUCT. The ancient aqueduct is shown as seen in the 1920s. The pipe sections were hand cut from stone as to fit tightly and joints were sealed with materials such as asphalt from the Dead Sea. This photo differs from Herod’s aqueduct shown on 09.03.08.A, indicating different methods of construction. Photo: Mary Morton/ Public Domain. 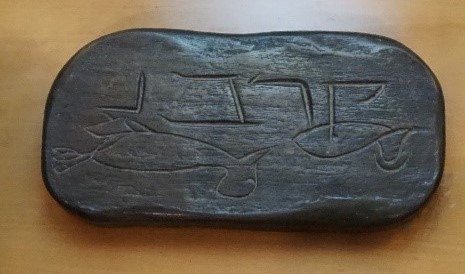 10.01.20.B. INSCRIPTION OF THE CORBAN.  The meaning of the word “Corban” remained a mystery until an inscription with the etched images of two sacrificial birds was discovered. The word was a reference to an offering of two doves. Photo by Jeff Herot.

[1]. The gospel writers not only recorded various events and teachings of Jesus, but each writer applied his own style to emphasize the importance of his message.  Mark not only wrote ideas in poetic style, but also themes – a writing technique that helped his audience memorize his message. See an example of the poetic themes of Mark 6:31 – 8:30 in Appendix 11.

[3]. When the gospel writers used terms such as “Jews from Jerusalem” or “Pharisees and scribes from Jerusalem” or similar statements ending with “from Jerusalem,” these persons were generally representatives of the Sanhedrin who came to listen, observe, and eventually challenge both John the Baptist and Jesus. Bookman, When God Wore Sandals. CD Trac 5.

[5]. The Mishnah has more than twelve treatises on this kind of uncleanness.

[6]. Babylonian Talmud, Shabbath 14b; Edersheim, The Life and Times of Jesus the Messiah. 484.

[11]. For additional study on the accuracy of oral transmission of commentary and biblical knowledge, see Gerhardson, Memory and Manuscript: Oral Tradition and Written Transmission in Rabbinic Judaism and Early Christianity, especially the section on Techniques of Repetition (page 163). The importance of this lies in the fact that the gospel narratives are believed to have been transmitted orally in the same manner until the gospel writers recorded them.

[14]. Bullinger, Figures of Speech Used in the Bible. 811.  Sarcastic irony is a figure of speech used by Jesus only to the worst religious leaders.