1 He went away from there and came to His hometown, and His disciples followed Him. 2 When the Sabbath came, He began to teach in the synagogue, and many who heard Him were astonished. “Where did this man get these things?” they said. “What is this wisdom given to Him, and how are these miracles performed by His hands? 3 Isn’t this the carpenter, the son of Mary, and the brother of James, Joses, Judas, and Simon? And aren’t His sisters here with us?” So they were offended by Him.

4 Then Jesus said to them, “A prophet is not without honor except in his hometown, among his relatives, and in his household.” 5 So He was not able to do any miracles there, except that He laid His hands on a few sick people and healed them. 6 And He was amazed at their unbelief.

Jesus returned to Nazareth, the village of His youth and young adulthood.  It was here where He spent many years working with Joseph as a carpenter. His neighbors and friends could not believe that this exceptional carpenter was more than a carpenter.

“Isn’t this the carpenter?”  After many miracles, Jesus returned to his hometown of Nazareth, where the local folks of the community still considered Him the son of a carpenter, one who built various objects of wood and possibly stone (see 04.07.01.).  Many of them probably employed Jesus at one time or another.  Carpenters were highly respected master tradesmen.[1] However, the carpenter, or tek-ton,[2] was not a carpenter in the modern sense of the word, but one who built with wood, and at times, stone and even metal.[3] Nonetheless, the fact that a son of their village could perform mighty works of God was beyond their comprehension, especially one who was born out of wedlock.  They chose not to believe.  The two highly acclaimed first century Jewish rabbis, Hillel and Shammai, were both master carpenters.[4]

The second century church father Justin Martyr (100 – 165) lived in Samaria, a short distance from Nazareth.  He was a strict defender of the faith and in his Dialogue with Trypho, he stated that Joseph and Jesus made “ploughs and yokes.”

And when Jesus came to the Jordan, He was considered to be the son of Joseph the carpenter; and He appeared without comeliness, as the Scriptures declared, and He was deemed a carpenter for He was in the habit of working as a carpenter when among men, making ploughs and yokes; by which He taught the symbols of righteousness and an active life.

“And the brother of James, Joses,[5] Judas and Simon?” There are three views of the relationship of these four men to Jesus.

Protestants believe that there are no biblical sources to support the second and third interpretations.[6]  In light of the fact that the gospel writer makes a clear connection to Mary and His brothers in verse 3, there is no other interpretation acceptable other than Mary and Joseph had at least seven children (Jesus, four brothers, and two or more daughters). 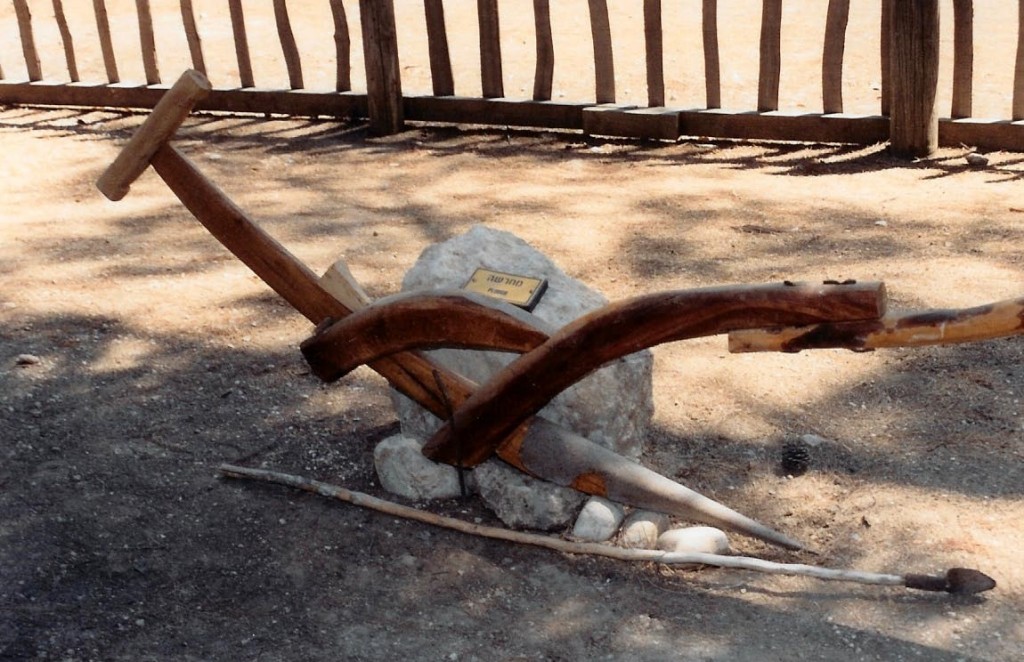 10.01.02.A. A TYPICAL FARM PLOW.  Agricultural tools like this plow were among many implements built by carpenters.  This design of a simple tool did not change from the days of the Egyptians 2000 B.C. until the industrial revolution.  It is believed that the carpentry trade included not only the manufacture of a wide variety of wooden objects, but also masonry works, since buildings were constructed of stone.  Photographed at the Philistine Museum in Ashkelon by the author.

“Prophet is not without honor except in his hometown, among his relatives, and in his household.”  Jesus was not only rejected by His hometown community, but even His family had difficulties accepting Him and His ministry, though they were obviously aware of His virgin birth. In fact, his half-brother James failed to realize His true identity until after the resurrection.  This underscores the fact that tensions must have existed in the family. They would bear unjust shame from friends and neighbors who could not accept the message and miracles of Jesus (see commentary on Jn. 19:25-27). That conflict sheds light on what Jesus said: whoever does the will of His Father in heaven is truly His brother and sister (Mt. 12:48-50).

Jesus must have left His hometown in great sadness knowing what His family’s future would eventually be.  These were people He loved, His neighbors, also His friends, with whom He spent many years. It saddened Him because “he was not able to do any miracles.”  Wherever the gospel writers said Jesus could not perform any miracles, it was not because He had any limitations or His divinity, but because He refused to cast pearls before swine; to heal those who had ulterior motives. Yet Nazareth did not receive the same fate as Capernaum, Chorizim, and Bethsaida.

[5]. Joses is often translated as Joseph.