13 “The kingdom of heaven is like treasure, buried in a field, that a man found and reburied. Then in his joy he goes and sells everything he has and buys that field.

Why would Jesus have referred to a treasure buried in a field?  Commercial banking systems did not exist as they do today.  People of means had to protect their money from thieves and tax collectors. A thief could quickly dig his way through a house if it was constructed with mud bricks near the Mediterranean coast instead of stone, as was done in the mountain region. Tax collectors carefully searched homes to look for hidden wealth – so the next best place to hide it was in a field, or take it to Jerusalem to be stored in the temple. The Mishnah states that this method of keeping money safe was common at the time.[1]  If an invading army came through the area, the family would often bury their wealth. But if those who buried the family’s treasure got killed, the treasure would be lost. The parables of Jesus connected with everyday life events of the first century.

Some scholars have suggested that this parable reflects deceitfulness.[2]  However, Jewish law stated that if the owner did not know of the treasure, he did not own it – it was ownerless.  But he did own the land.[3] One of the Dead Sea Scrolls, known as the Copper Scroll, is not a literary scroll but refers to temple treasures that were buried in various places prior to the Roman destruction. However, the identifiable landmarks described in the Scroll that would lead to the buried treasures, have long been removed and today no one knows where the treasures were hidden.[4] 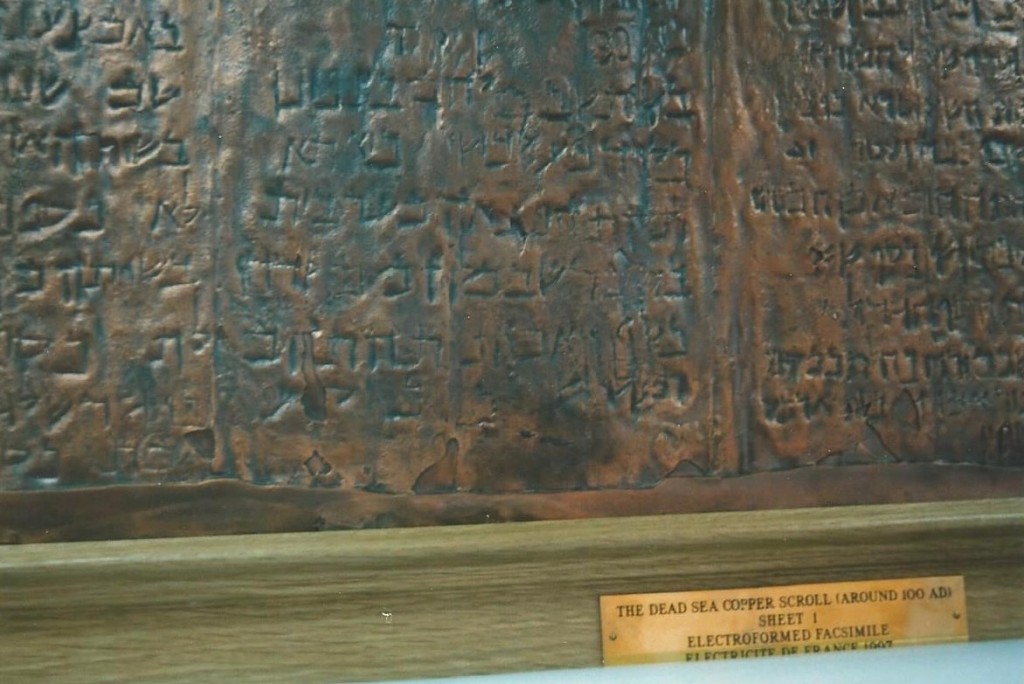 09.03.21.A THE TREASURES OF THE COPPER SCROLL. The Copper Scroll is one of the Dead Sea Scrolls (3Q15) that was discovered in 1952. Shown above is an electroformed facsimile section of the scroll that describes where the treasures of the temple were hidden prior to the Roman siege in A.D. 70. The account of the Copper Scroll reflects the cultural characteristics of the parable of Jesus. Photographed at the Jordan Archaeological Museum by the author.

[2]. Issler, “Exploring the Pervasive References to Work in Jesus’ Parables.” 327.

[4]. The Copper Scroll can be seen in the Jordan Archaeological Museum located in the Citadel of Amman in Amman, Jordan. A few scholars believe that some of the temple treasures were accidently discovered by the Crusaders and carried back to Europe. For more information, see Grant Jeffrey, Unveiling Mysteries of the Bible. 153-60.