24b So Jesus went with him, and a large crowd was following and pressing against Him. 25 A woman suffering from bleeding for 12 years 26 had endured much under many doctors. She had spent everything she had and was not helped at all. On the contrary, she became worse. 27 Having heard about Jesus, she came behind Him in the crowd and touched His robe. 28 For she said, “If I can just touch His robes, I’ll be made well!”       29 Instantly her flow of blood ceased, and she sensed in her body that she was cured of her affliction.

30 At once Jesus realized in Himself that power had gone out from Him. He turned around in the crowd and said, “Who touched My robes?”

31 His disciples said to Him, “You see the crowd pressing against You, and You say, ‘Who touched Me?’”

32 So He was looking around to see who had done this. 33 Then the woman, knowing what had happened to her, came with fear and trembling, fell down before Him, and told Him the whole truth. 34 “Daughter,” He said to her, “your faith has made you well. Go in peace and be free from your affliction.”

One Church tradition reports that this woman was a Gentile by the name of Lydia. Another says her name was Veronica (Latin) or Bernice (Greek) and the tradition also states that when Jesus carried His cross to Calvary, she gave Him her veil for Him to wipe His forehead.[1] However, these traditions are clearly false since Jesus referred to her as “daughter.”  This title would have been given only to a Jewish woman, and her identity reveals the social difficulties she endured.  As a Jewish woman, she would never have been in public with such a health problem knowing that she would defile others.[2]  Her bleeding and the rules of feminine modesty rendered her untouchable (Lev. 15:19-30) and a social outcast. She had spent all her resources on doctors, and Mark implies that she even suffered from the remedies prescribed by doctors. Regardless of her illness, she was desperate enough to put aside her religious restrictions, risk punishment from the local rabbis, and pursued her healing. It is difficult to know if she suffered more from the illness or the social stigma that resulted from it. Nonetheless, when she heard of a Healer named Jesus, she believed that if she could get close enough simply to touch His prayer shawl, she would be healed.[3]

“If I can just touch His robes.”  The term robes is not the most accurate translation, but neither is the word hem as found in most Bibles.[4] The original Greek word is kraspeda or kraspedon, which in Hebrew is zizith, meaning tassel of twisted wool.[5] These tassels and their knots were a command of God through Moses for all men to wear (Num. 15:37-41; Deut. 22:12) and reminded them of the 613 commandments God had given them.[6]  The tradition of wearing tassels is still observed among orthodox Jews today, who are quick to cite Num. 15:32-41 for the basis of their belief. Each of the fringes consisted of eight threads, of which one was wound around the others; first seven times with a double knot, then eight times with a double knot, then eleven times with a double knot, and finally thirteen times.[7]  Since Hebrew letters have numeric values, the numbers spell Jehovah One.[8]  It was Jehovah One that the woman touched since Jesus wore them (Mt. 9:20; 14:36).[9] She not only touched Jesus but she also touched Judaism, a most significant point (because salvation and healing comes from the Jews). It was common knowledge, that if Jesus touched her, or if she touched Him, He would become unclean until evening.[10] So when she did the crowd was stunned.  Furthermore, it was not that He who became defiled, but rather that she become pure, cleansed, and healed.[11] Now Jairus was again able to see again the power of the faith of Jesus.

Being an orthodox Jew, Jesus wore tassels that hung from His belt as prescribed in the Torah. One distinctive feature of Jesus that is difficult for modern students to accept is that He dressed and acted like an orthodox rabbi.  Because of this, some translations refer to the woman’s touching of the “hem of his garment.”  A man’s prayer shawl was sacred to him, and its tassels were on the sacred symbolic garment worn by every adult male Jew. Tassels were the blue and white wool threads worn at each corner. Each tassel has five knots, representing the five books of the Torah. Christian artists almost never depict Jesus in robes with a phylactery, nor tassels hung from the “four corners” of His belt, nor with strings (tassels) at the corners of His prayer shawl (Heb. tallit).  Amazingly, it is easier for modern students to understand the actions of the woman than it is to realize that Jesus lived and functioned as a Jewish rabbi at the end of the Old Testament Period. 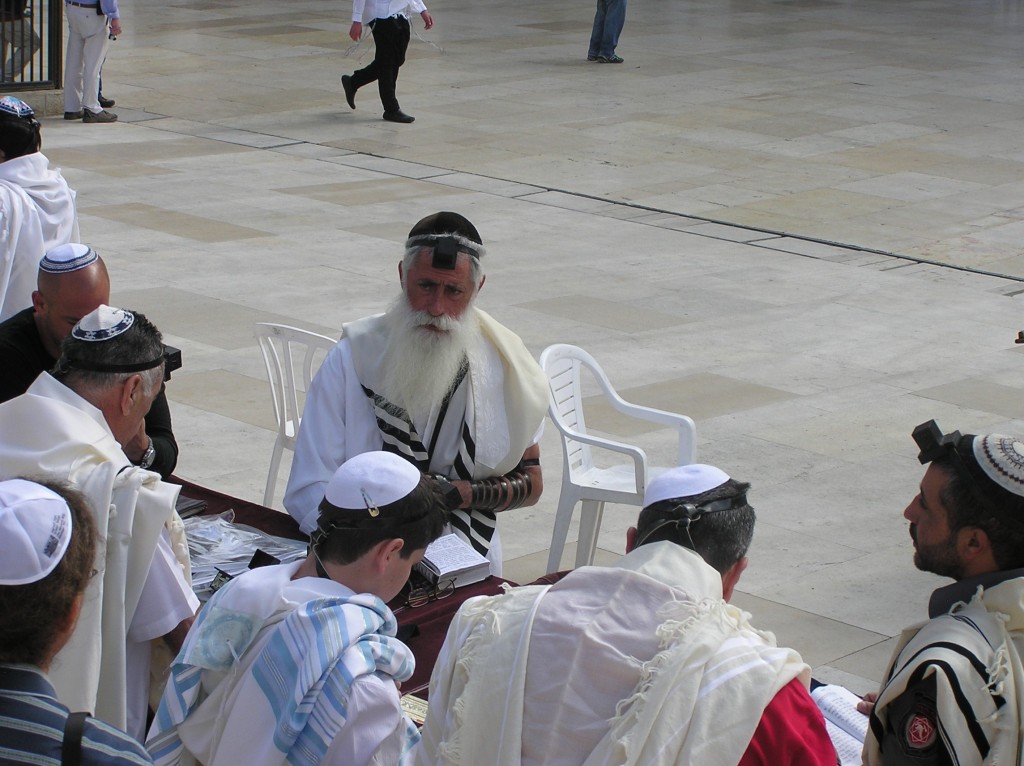 08.06.05.A. A RABBI WITH PHYLACTERY AND PRAYER SHAWL. A rabbi is shown wearing a phylactery on his forehead and left arm and a prayer shawl over his shoulders. Tassels or strings, are on the prayer shawls as well as the “four corners” of a man’s garment. Photograph by the author.

Some messianic scholars have suggested that she touched the corner or border of His prayer shawl (Num. 15:38) which is known as in Hebrew as the kanaph. This word has been translated some seventy-six times as “wings” in the Old Testament. For example, Psalms 91:1-4 states we are to be hidden “under His wings” is a play on words that means to hide under a prayer shawl. This woman of faith was healed by touching the tassels that were on His prayer shawl and, therefore, she was literally a fulfillment of the prophecy in Malachi 4:2 that read “healing in His wings.”[12] This was most difficult for them to comprehend and rationalize without concluding that, in some manner unknown to them, it was Jesus who created the Mosaic Law.  When she reached out to Jesus, she touched the name of God.  By faith she was healed, while other people in a crowded street simply bumped or brushed by Him with no response.  The miracle was repeated later in Matthew 14:36 when many others were healed.[13]

On an interesting side note, did the Apostle Paul really support himself financially by making tents? Three-quarters of the one hundred references to tents are in the first seven books of the Bible.  When Moses wrote the Torah, the Hebrew children lived in tents and over the centuries they gradually moved into permanent dwellings. By the New Testament period, the only people who lived in tents were Arabs and Bedouins. Do modern scholars really believe that the orthodox Jewish Rabbi Paul made tents for Arabs and Bedouins?

Could it possibly be that the apostle made tents for a nomadic people who did not live anywhere close to him?  That is highly doubtful, yet modern translators and preachers insist he was a “tentmaker.”  Paul was a Pharisee of Pharisees and a scholar of scholars.  He studied under the famed Gamaliel, the grandson of Hillel, one of the two most honored rabbis of the Second Temple Period. He made prayer shawls.  When a Jewish man desired to be alone with God, he would place his prayer shawl around his head to create a “little tent.”  In light of that, is it possible that the apostle, who preached the gospel to bring men closer to God and wrote most of the New Testament letters, would weave prayer shawls so Jewish men would get closer to God? You decide.  It should be noted that Jesus did not criticize anyone for wearing tassels, but He only criticized those Pharisees who proudly made their’s long (Mt. 23:1-12). Jesus lived and functioned as a Jewish rabbi at the end of the Old Testament Period.

“Who touched My robes?”  Jesus did not ask the question because He was unaware of her identity, but because her confession would be an expression of her faith.[14] Was it possible for healing power to go forth from Him without the full consent of His will?  If she would have been successful in attaining her healing in secret, would it have been stolen? Jesus wanted to know who she was so He could freely give her the gift she so desperately desired. Only in complete honesty can one enjoy the gifts of the Savior. He then blessed her with the words, “go in peace.”

“Your faith has made you well.”   This is one of several accounts[15] where Scripture indicates that the healing came as a result of the faith (or trust) of the sick person.  There are also accounts where the healing came as a result of the faith of others (Mk. 2:5) and accounts where Jesus could do no miracles because there was no faith.[16] Wherever the gospel writers said Jesus could not perform any miracles, it was not because He had any limitations on His divinity, but because He refused to cast pearls before swine; to heal those who had ulterior motives. Jesus never met a demon He could not exorcise; sickness He could not heal; but He could not convert an unbeliever or skeptic who refused to be convinced of who He was.

Finally, it should be noted that in Hebrew and Aramaic there is no distinction between “body” and “soul.” Therefore, when Jesus healed He always healed the whole person. For that reason, when He healed people of physical diseases, He made comments such as “Your faith has saved you,” or “Go in peace,” (i.e. Mk. 10:52; Lk. 7:50).[17]

[6]. The 613 laws were observed only during the times of the tabernacle or temple. Today, only 271 of those Mosaic commands can be observed. See Parry, The Complete Idiot’s Guide to the Talmud. 221.

[7]. Moseley, Yeshua: A Guide to the Real Jesus and the Original Church. 21-22; The knots had alpha-numeric values which represented the recepts of the Law. See also Geikie, The Life and Works of Christ. 1:189-92.

[9]. Smith, Augsburg Commentary on the New Testament: Matthew. 272-73. It is most unfortunate that Christian artists almost never depicted Jesus as wearing fringes on His garments.

[13]. Farrar, Life of Christ. 164-65. According to Green, Interlinear Greek-English New Testament; Berry, Interlinear Literal Translation of the Greek New Testament. Mt. 14:36), others begged to touch the fringe of His Garment.