Mt. 24 “Therefore, everyone who hears these words of Mine and acts on them will be like a sensible man who built his house on the rock.

and the winds blew and pounded that house.

Yet it didn’t collapse,

because its foundation was on the rock.

26 But everyone who hears these words of Mine and doesn’t act on them will be like a foolish man who built his house on the sand.

27 The rain fell, the rivers rose

and the winds blew and pounded that house,

And its collapse was great![1]

“Lord, Lord.” In this passage Jesus again took on one of the names of God, Adonai, which means Master over Everything.[2] At issue is the fact that people honored Him with their lips but failed to do what was required for them. Therefore, Jesus connects words and faith with obedience. Furthermore, He identified Himself as the One who is in authority, in absolute rulership. To the Jewish listeners, the name Adonai, defined God as the One who was in absolute rule.[3]

There is dark alluvial sand in many areas around Galilee.  It is unlike ordinary beige-colored sand which is found in a desert or along any seashore.  The alluvial sand develops a firm hard surface in the dry summer months and appears to be solid ground, but obviously isn’t.  In the winter when it rains or a nearby river floods, the alluvial sand will wash away like ordinary sand. But just a few feet below the sandy surface is firm bedrock.  If one wanted to build a house, the builder would have to take the time and effort to dig through the sand and build upon the rock foundation.

When Jesus spoke of the “wise man who built his house on the rock,” he was not speaking of where to build, but how to build.  The point of the story is to take the time and effort to build a strong house. Likewise, we are to take the time and effort to build a strong character – or foundation – in Christ.  To the first century Jews, the interpretation was to see the rock as the Word of God and the sand as the teaching of the Pharisees.[5]  It is noteworthy that Jesus said storms will come into everybody’s life, whether a believer or not.  How one survives those storms is not only dependent upon one’s faith, but also upon how strong their spiritual foundation is.  In essence, Jesus was teaching right living to His people and telling them to choose between death and life (cf. Deut. 30:15-20). He did this many other times as well, including at the end of His Sermon on the Mount. The Apostle Paul later made a reference to building a foundation upon the teaching of Christ (1 Cor. 3:10-15).

Ironically, Herod the Great, one of the supreme architects and builders of the ancient world, constructed an artificial harbor at the Mediterranean seaport city of Caesarea, a city that he also built. To create his harbor, it is believed that he took barges, filled them with hydraulic concrete powder,[6] floated them to the desired locations, and sank them.  Sea water mixed with the powdered concrete, and artificial stones, or concrete blocks were created. However, during the following centuries, the concrete blocks continued to sink as a result of the shifting sand on the sea floor.  After a few centuries, the harbor walls disappeared below the waterline.[7] Today the ancient harbor is little more than a point of interest for marine archaeologists. 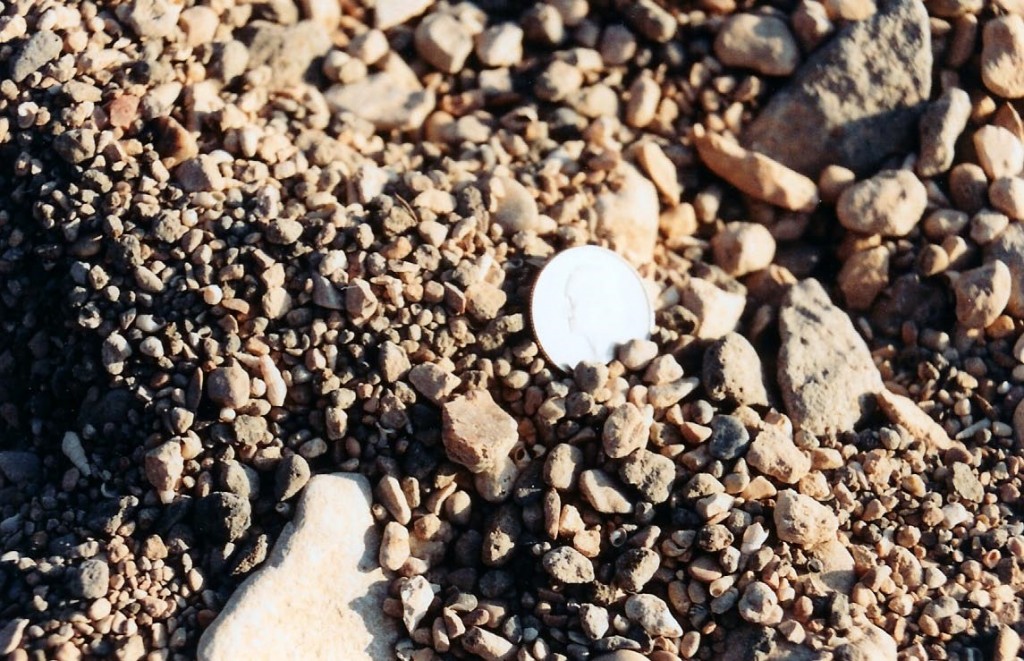 08.04.08.A. BLACK BASALT SAND OF THE SEA OF GALILEE REGION. The black basalt sand (from volcanic rock) along the shoreline of the Sea of Galilee is not at all like ordinary sand. It is large and coarse and only a few feet below is solid bedrock. The gravely sand is shown in contrast with a United States quarter coin.  Photograph by the author.

Houses were built between early spring and late fall, with the exception of the hot afternoons of August.  Construction was not suitable in the winter when cold wet weather was the norm. A typical week in winter had two or three days of cool or cold cloudy weather followed by two or three days of rain, and the cycle repeated.[8] Now and then came a heavy storm.  The key point Jesus taught was that a house with a foundation will survive the storms of life; a life with Jesus will survive the storms of life. Furthermore, His overall message was that now is the time to build the right foundation.

The “foundation” imagery of the messiah was not a new concept.  The prophet Isaiah spoke of it and the local rabbis knew those words concerned the messiah. Note the messianic prophecy:

14 Therefore hear the word of the Lord, you mockers who rule this people in Jerusalem.

D  the one who believes will be unshakable.

Section A refers to the covenant with death

Section B is a refuge (house?)

Line D is the focus of the parable; the inscription upon the believer

Section C’ refers to the use of the building material

Section B’ states that the refuge will be destroyed

Section A’ states that the covenant with death is annulled.

The similarities of the two parables are these:  In essence, the foundation upon which a house or refuge (meaning one’s life) is built is Jesus. The hearing and doing is the extra effort equal to that of digging through the hard soil to uncover a solid rock. Both Isaiah and Jesus encouraged believers to hear the Word of the Lord, but Jesus also encouraged them to do His Word. Isaiah’s sections C and C’ refer to Jesus.

The rabbis believed that verse 16 clearly indicated that “the stone” is not an ordinary stone, but a Divine Being of some kind. They were convinced the “tested stone” and “sure foundation” could not be an “ordinary” person which is a reason why they rejected Jesus. To them, Jesus looked just like any other Jewish man; His divine qualities were not physical, but were revealed in His emotional, mental, and spiritual characteristics.

From the collection of the Dead Sea Scrolls is a scroll known as the Rule of the Community. Note the following phrase that has an incredible reference to this foundation:

In the Council of the [Essene][10] Community there shall be twelve men and three priests, perfectly versed in all that is revealed of the Law, whose works shall be truth, righteousness, justice, loving kindness, and humility …. When these are in Israel, it shall be that tried wall, that precious cornerstone, whose foundation shall neither rock nor sway in their place.

The opinions of the Essenes were certainly not accepted or even known by most of the Jewish people, but they clearly believed in the “essential foundation” concept. 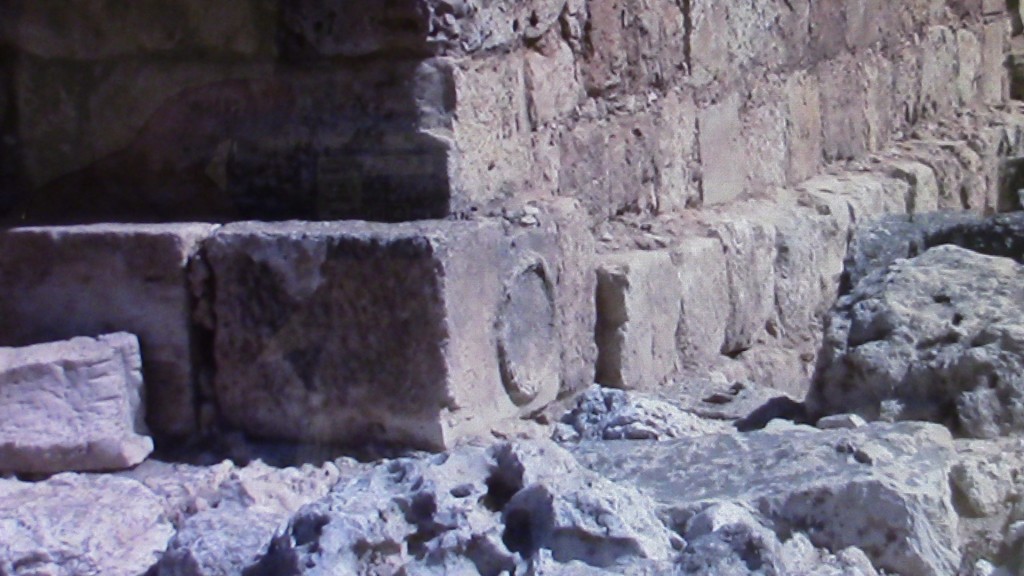 08.04.08.B SYNAGOGUE CORNERSTONE AT SHILO. The cornerstone was a foundation stone from which all measurements were taken for the construction of a new synagogue.  As such, it was an ornamental dedication stone that, when laid, was accompanied with considerable celebration of the anticipated future of the new facility. Photo by Linda Landis.

[3]. See “Jesus, the Fulfiller of Selected Names of God” in Appendix 32 for additional attributes; Evans, Praying the Names of God. 17-18.

[6]. While some scholars believe that hydraulic concrete was a Roman invention, others believe it was modified from hydraulic plaster that may have originated in the Aegean Sea area in the late second millennium B.C. by the Philistines.

[10]. Insert by the author of clarification.

[11]. Cited by Bailey, Jesus through Middle Eastern Eyes, 321 in Vermes, “The Community Rule.” in The Dead Sea Scrolls in English. 85.