and it will be given to you;

and you will find;

and the door will be opened to you

8 For everyone who asks

and the one who searches

and to the one who knocks,

the door will be opened.

9 What man among you, if his son asks him for bread,

will give him a stone?

he give him a snake?

know how to give good gifts to your children,

how much more will your Father in heaven

give good gifts to those who ask him!

12 Therefore, whatever you want others to do for you, do also the same for them — this is the Law and the Prophets.

In ancient times, bread was not baked in oblong pans that formed thick loaves, as is done today in the West.  Some have mistakenly said loaves were in the same shape as stones and, therefore, Jesus made a visual connection.  Yet this author has traveled all over Israel and never found an example of this proposed similarity.  Residents of Israel agree that stones simply do not look like the thin pancake-shaped loaves of bread. 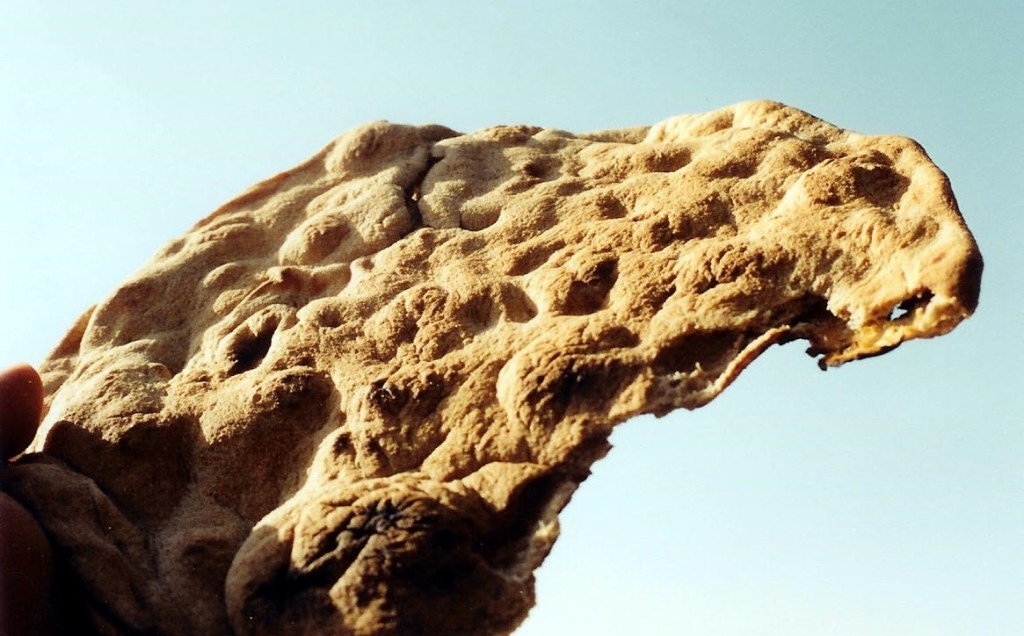 08.04.05.A. TRADITIONAL BREAD. Many bake shops in Jerusalem and other communities today bake bread as was done in biblical times.  The bread is similar to a pancake and is laid on the flat surface of the oven, hot rock, or today, on the outer edge of a 55-gallon steel drum.  Photograph by the author.

Once when teaching in Israel, one of the author’s students informed him that rocks were first placed in an open fire to be heated. They were then removed and the flat dough was spread over the stones to bake. The student also showed the author a gas-fired oven lined with rocks.  Thin batches of dough were placed on the pre-heated rocks clearly demonstrating that the old tradition was adapted to the 21st century.

When Jesus was teaching along the shore of the Sea of Galilee, He was near the small fishing village of Tabgha. A short distance into the water are seven hot springs that is favorite habitat area for fish and snakes during the colder winter months.[1]  This figure of speech was used because snakes occasionally were caught in the nets of fishermen. This was mentioned by the visiting Spanish Pilgrim Egeria (c. 383) and by Theodosius (c. 530).[2]

Here, and again in Matthew 22:39, Jesus made an appeal to believers to ask their heavenly Father for what they need, and He will provide.  Likewise, we are to treat others in the same manner as we desire to be treated ourselves.  It rephrases what Moses said fifteen centuries earlier.

Do not take revenge or bear a grudge against members of your community, but love your neighbor as yourself; I am Yahweh.

Divine instructions for life have been in existence since Adam and Eve. That is why Abraham gave a tithe long before Moses wrote of the commandment concerning tithes. That is also why some basic principles of life in Judaism and Christianity (i.e. marriage = 1 man +1 woman) are found in other religions. The Golden Rule (Matthew 7:12) is found in negative form in Hinduism, Buddhism, and Confucianism, as well as in the rabbinic writings.  Variations have also been found in Greek and Roman ethical teachings. This suggests two things:

Almost two centuries before Christ, a Jewish scribe by the name of Jesus, son of Sirach, wrote a text known as Ben Sirach, a/k/a Ecclesiasticus.  This extra-biblical book has an interesting reflection on the writings of Moses. The following words indicate that at least some Jews were close to understanding the principles of the Kingdom of God before Jesus came:

Forgive your neighbor the wrong he has done,

and your sins will be pardoned when you pray.

Does anyone harbor anger against another,

And expect healing from the Lord?

If one has no mercy toward another like himself,

Can he then seek pardon for his own sins?

Many Jews had already put into practice what Jesus was teaching before He came.  One Jewish scholar, David Flusser of Hebrew University in Jerusalem, went so far as to say that, “From ancient Jewish writings, we could easily construct a whole Gospel without using a single word that originated with Jesus. This could only be done, however, because we do, in fact, possess the Gospels.”[3]

“If you then, who are evil.”  This is a general statement meaning that all men are sinners. The sinful nature of people does not mean they do not love their children and want to care for them.  So how much more does God the Father care for His children?  Jeremiah said that humanity was lost, deceitful, and wicked (Jer. 17:9), but God sent Jesus that people would not be condemned, but would be saved (Jn. 3:16).  This is foundational to understanding the Christian faith.

“Whatever you want others to do for you, do also the same for them.”  Again, the teachings of Jesus were reflected by some leading rabbis who had an accurate perception that the Law was not to legalize or restrict, but to point the way the heart should be guided.  Two rabbis made these comments that are incredibly similar to Matthew 7:12. Rabbi Eliezer said,

Let the honor of your own fellow man be as dear to you as your own.

Let the possessions of your fellow man be as dear to you as your own.

“This is the Law and the Prophets.”  Verse 12 is a summary statement. Jesus again clarified that He did not come to replace the Old Testament, but to fulfill it.  He did not replace the Law per se, but instructed His disciples to fulfill the intent of the Law.  The intent of the Law, as well as understanding the character of God, is explained in the following manner:

To say that the Old Testament is invalid is correct only in terms of the sacrificial system, as Jesus replaced that system with His body at Calvary.  It is significant that all other portions are to be honored as reflected in obedience. On an important side note, it is unfortunate that the Church has adopted a Roman view of Law, that means restriction and is therefore, bad, but fails to see that the Hebrew Bible views Law as instruction and freedom, and is therefore, good.[4]

An encounter was recorded between Rabbi Hillel and Rabbi Shammai both of whom lived just prior to the birth of Jesus and during His young manhood. The story is that of a pagan who asked both scholars to teach him the core issue of the Torah. Their responses reflect an interesting insight of their character and belief system.

A pagan came before Shammai and said to him, “Make me a proselyte, but on the condition that you teach me the entire Torah while I am standing on one foot!”  Shammai drove him off with the builder’s measuring rod which he had in his hand.  When he (the pagan) appeared before Hillel, the latter told him, “What is hateful to you, do not to your neighbor.  That is the whole Torah, while the rest is commentary; go and learn.”

Many of the teachings of Jesus confirmed what righteous Jews already knew. Those who opposed Him did so on the grounds that they held the Oral Law in a position superior to the Hebrew Bible. Likewise, they refused to recognize Him as their Messiah.

[1]. The Jordan River Valley is dotted with locations where hot springs still exist.  The most popular for tourists today are the hot springs resort in Tiberius and the family park of the Hamat Gader Roman Baths at the southeast end of the Sea of Galilee.

[4]. See video 08.01.06.V by Messianic Rabbi John Fischer who discusses the term “light and heavy” elements of the Mosaic instruction from a first century Jewish perspective. He makes a comment about the definition of “Torah” as it means “guidance” or “instruction,” rather than “law.”