SALT AND LIGHT OF BELIEVERS

13 “You are the salt of the earth. But if the salt should lose its taste, how can it be made salty? It’s no longer good for anything but to be thrown out and trampled on by men.

14 “You are the light of the world. A city situated on a hill cannot be hidden. 15 No one lights a lamp and puts it under a basket, but rather on a lampstand, and it gives light for all who are in the house. 16 In the same way, let your light shine before men, so that they may see your good works and give glory to your Father in heaven.

“You are the salt of the earth.” Salt has always been an essential for life, especially in desert regions such as those east and south of Jerusalem.  Jesus said His disciples are to be like salt to the culture – being a life-giving preserving agent.

By the southwestern shores of the Dead Sea is a ten mile long salt mountain, from where the Dead Sea obtains its saltiness. It was also from where salt was shipped to the port city of Eilat in the south and to Tabgtha and Magdala in the north (see Ezek. 47:11). In these two fishing villages, fish were salted and shipped throughout the eastern Roman and western Parthian Empires. In that sense, many in His audience were literally the “salt of the earth.” The Sea of Galilee was the primary fresh water lake for fish, which was the meat of choice both for travelers and local people.  Josephus called the village of Magdala Taricheaea, which means “salted fish” in Greek.[1] For centuries caravans purchased salt that is 98% pure and shipped it to distant markets. Judaea had been the salt of the earth physically, but now Jesus was speaking in a spiritual dimension.

On a more general note, salt was used to season food (Job 6:6) and meat offerings (Lev. 2:13) and in moderate amounts was eaten in hospitality with others.  The ancients knew that without this precious mineral they would become weak and could die in the arid and semi-arid climates. It was not considered so much a source of seasoning, but one of strength and life.  Hence, it became symbolic of life, strength, and truthfulness from the lips of Jesus.[2]  It was considered so valuable to the maintenance of life that it was even mixed with feed for cattle (Isa. 30:24). Contracts between two individuals were sealed with an exchange of salt and were known as a “Covenant of Salt” (Num. 18:19; 2 Ch. 13:5).   To be “salt” to men is similar to being the “light to the world,’ in that a person demonstrates to others how to live a godly life.

Israel was important to the Romans because this tiny Jewish nation had an inexhaustible supply of salt, so much so that taxes were often paid with salt. It was shipped via camel caravans to all parts of the eastern section of the Roman Empire.[3] As salt was essential to the Roman Empire, so the “salt” of the believers is essential to the lost people of the world. Israel had been the salt of the earth physically, but now Jesus was speaking in a spiritual dimension.

Finally, it has been suggested that salt had an additional use – one that is often overlooked. In ancient times one of the household duties of children was to collect animal dung which was molded into patties, dried, and used as fuel in clay ovens. There was always an abundant supply of “cooking fuel” but also a scarcity of wood. Some scholars believe that a small block of salt was placed under the dung in the stove to improve its combustibility.  If this was the intended cultural meaning, then some other references to salt in the New Testament could mean that it was an aid to making fires burn rather than as a flavor seasoning or preservative agent. However, in this case it would be also be a fitting Hebraic image to another comment, “You are the light of the world.”[4] 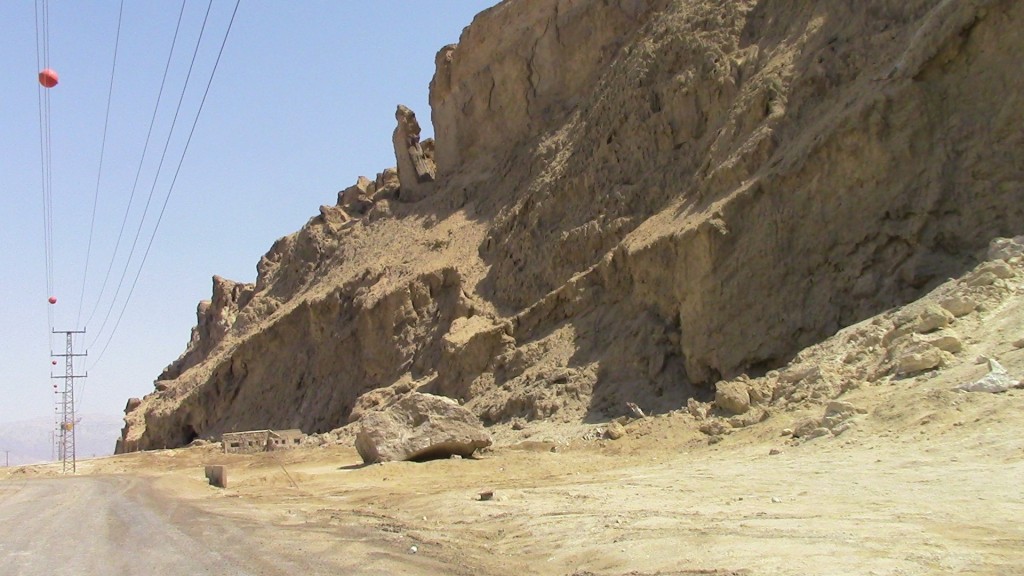 08.01.03.A. THE DEAD SEA SALT MOUNTAIN. The so-called “Lot’s wife” pillar stands atop a ten-mile long mountain of salt at the south-western end of the Dead Sea. It is from this mountain that the water obtains its saltiness. The mountain is 98 percent pure salt and the remaining two percent give it color.[5] For centuries salt was taken from this mountain and transported by caravan to the Sea of Galilee where it was used to salt fish. Photograph by Paivi Heinrich.

“But if the salt should lose its taste.” Critics have long said that due to the chemical composition of salt, it is impossible for it to lose its flavor. Technically, they are right even if there are several varieties of salt,[6] but Jesus was not speaking of chemistry, but local salt. Salt from the western cliffs of the Dead Sea is 98% pure, with the 2% giving it its color. Impurities can have a negative effect, which may be why the Pliny the Elder had observed that salt from the Dead Sea can lose its savory quality and become bland and tasteless.[7]  But there was a social component at well.  Occasionally when salt was loaded aboard ships or on camels, Samaritans were known to throw dirt on the precious cargo to destroy its value. Clearly, the taste and value of salt could be destroyed.

“A city situated on a hill cannot be hidden.” Jesus again used imagery with which everyone was familiar, although the imagery could have referred to more than one particular place. Throughout Israel there were villages designated as “warning cities.”  These were hilltop villages who would give warning signals to other designated hilltop villages of an encroaching enemy.  Also, when the rabbis at the temple determined the moment the Sabbath had begun, the trumpets would blow and a fire signal was given at the pinnacle of the temple. The signal was seen and repeated at the nearest “warning city” so the next hilltop village could relay it.[8] In a matter of seconds of the announcement in Jerusalem, the Jews of the Galilee knew the Sabbath had begun. Jesus perhaps was referring to such a “warning city.”

However, on the eastern side of the Sea of Galilee there was a city, Hippos, located atop Mount Sussita and well known to everyone.[9]  The Greek name Hippos and Aramaic name Sussita both mean horse. It was one of the ten Greek cities known as the Decapolis with a significant Jewish population. Jesus could have referred to it because a small light shown there could be seen for miles. 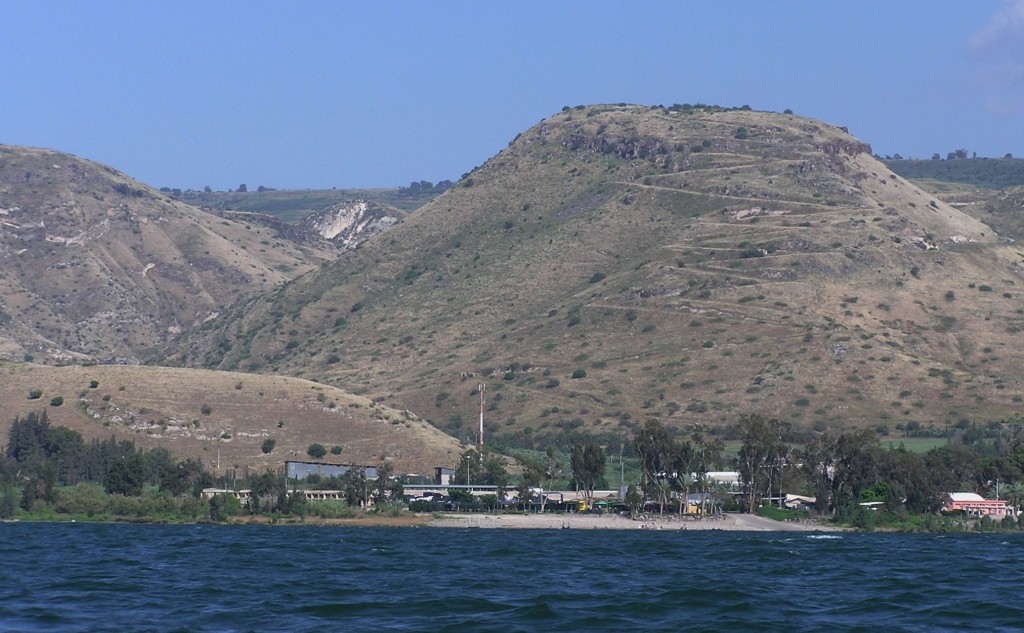 08.01.03.B. A CITY UPON A HILL. The city upon a hill which Jesus mentioned was possibly Hippos on the top of Mount Sussita along the eastern shore of the Sea of Galilee. A switch-back trail is visible that leads to the top. Photograph by the author.

Jesus used the metaphor of life-giving salt to underscore the significant impact His followers have upon the earth, meaning that they help sustain the life of all humanity.   A metaphor affirms one concept by using another, a description of speech whereby an object is described as if it were another.   The second concept is always directly related to the first and gives it definition.[10]  It is best explained with the examples below:

Therefore, a metaphor obviously cannot be literal, but it does convey the meaning to a more accurate degree.  The classic example is the Parable of the Sower (Mt. 13:18-23, 37-43), which also has its interpretations.

“Your good works.” This phrase seems to be simple enough that it would not need explanation.  However, from God’s perspective the good works or good deeds are not merely good, they are beautiful.[11]  The usual Greek word for good is agathos, but in this statement the Greek word is kalos, meaning beautiful. That means our good works are not only good, but attractive in a moral and spiritual sense. Furthermore, there is a sense of appreciation and love connected with this word kalos.

[1]. Magdala had an Aramaic nickname Dalmanutha, which means “the harbor” because it was where fishermen brought their fish to be salted and where fish houses had small indoor pools to keep the fish alive until purchased by local residents.

[3]. Petroleum-based tars were harvested from the Dead Sea and shipped internationally to be used in boat construction, medicines, and other uses. For centuries the Egyptians also used Dead Sea tar to preserve and seal the wrappings of mummies.

[4]. Pilch, The Cultural Dictionary of the Bible. 4-5. See also comments by Rabbi John Fischer in 10.01.28.V where he discusses two unique healing methods of blind men.

[6]. See any chemistry textbook or website such as http://en.wikipedia.org/wiki/Salt_(chemistry). Retrieved September 13, 2014.

[9]. It is unknown when the first churches were established in Hippos, but by the fourth century church buildings were constructed and these congregations survived the Muslim conquest in 636. However the city was destroyed by an 6.6 magnitude earthquake (Richter scale) in January 18, 749. See Segal and Eisenberg. “The Spade Hits Suissita.” 40-51, 78 and http://geology.geoscienceworld.org/content/31/8/665.abstract and http://en.wikipedia.org/wiki/749_Galilee_earthquake