Jesus was always admired for His insightful wisdom and teaching techniques. As was typical of so many rabbis, He responded to a question with another question, but other times He structured a response that perplexed those who questioned Him. That has left some modern scholars to ask the question:

Jesus used a method of reasoning, analysis, and leading questions, known as the dialectic argument,[1] to bring forth an idea in the minds of His disciples.[2]  Rabbis prided themselves on asking profound questions that would create hours of debate. Each opponent (or rabbi), selected, paraphrased, distorted, and re-combined the points which seemed to him to be the weakest of his opponent. Jesus was fully engaged in this type of dialogue and, therefore, is often seen answering a question with another question. The goal was not to respond with a simple answer, but rather to encourage self-examination and self-criticism. This teaching method had become a highly valued skill among the Jews and Greeks.[3] However, did this method come from a foreign source or is there an historical record in Jewish literature?

Modern scholarship has credited Socrates (c. 470-399 B.C.) with developing this method of questions and answers; and sometimes a question is the response to a challenging question.  The purpose of Socrates’ questions was to expose error and uncover truth through logic.[4]  Centuries before the time of Jesus, the Greeks called this “the Socratic art.”  Critics have proposed that Jesus borrowed His teaching techniques from the famed Greek philosopher.  The Socratic art did flourish and was well established in Judaism by the first century, but was the famed Greek philosopher the originator of this highly acclaimed teaching technique?

From the pages of the Old Testament, there are several encounters between prophets and those to whom God desired to give a message. Undoubtedly, the most famous is the discussion between Nathan and King David regarding the king’s affair with Bathsheba and the death of her husband.  The account in 2 Samuel is as follows:

1 So the Lord sent Nathan to David. When he arrived, he said to him:

There were two men in a certain city, one rich and the other poor. 2 The rich man had a large number of sheep and cattle, 3 but the poor man had nothing except one small ewe lamb that he had bought. He raised it, and it grew up, living with him and his children. It shared his meager food and drank from his cup; it slept in his arms, and it was like a daughter to him. 4 Now a traveler came to the rich man, but the rich man could not bring himself to take one of his own sheep or cattle to prepare for the traveler who had come to him. Instead, he took the poor man’s lamb and prepared it for his guest.

5 David was infuriated with the man and said to Nathan: “As the Lord lives, the man who did this deserves to die! 6 Because he has done this thing and shown no pity, he must pay four lambs for that lamb.”

7 Nathan replied to David, “You are the man!

In this narrative, the dialectic argument was used to lead the king into self-discovery of his own sin.  This would make one wonder if Socrates had not heard of this technique from a Hebrew source.  Without question, the earliest example of dialectic argument is found in the book of Job, as this book is said to be the oldest in the Old Testament.  After the many adversities Job faced, God spoke to him with rhetorical questions that resemble dialectic argument.

4  Where were you when I established the earth?

Tell Me, if you have understanding.

5 Who fixed its dimensions? Certainly you know!

Who stretched a measuring line across it

6 What supports its foundations?

Or who laid its cornerstone

7 While the morning stars sang together

And all the sons of God shouted for joy?

The nature of the dialogue would have profound effects upon the one who initiated the question.  Below are some examples used by Jesus.

Then Jesus said to them, “I ask you: Is it lawful on the Sabbath to do what is good or to do what is evil, to save life or to destroy it?”

As is frequently noted in the Bible, the scribes, Sadducees, and Pharisees had spent considerable time observing Jesus and accused Him of performing miracles on the Sabbath.  In their minds, the issue was not that it was good to heal on the holy day, but to do anything except to save a life was considered a gross sin.  This issue of doing good on the Sabbath surfaced again later and is recorded in Luke 14.

5And to them, He said, “Which of you whose son or ox falls into a well, will not immediately pull him out on the Sabbath day?”  6 To this they could find no answer.

When the authority of Jesus was questioned, He again responded in dialectic fashion.  This placed His accusers in the position of self-entrapment.  The narrative is found in Matthew.

23  When He entered the temple complex, the chief priests and the elders of the people came up to Him as He was teaching and said, “By what authority are You doing these things? Who gave You this authority?”

24 Jesus answered them, “I will also ask you one question, and if you answer it for Me, then I will tell you by what authority I do these things. 25 Where did John’s baptism come from? From heaven or from men?”

They began to argue among themselves, “If we say, ‘From heaven,’ He will say to us, ‘Then why didn’t you believe him?’ 26 But if we say, ‘From men,’ we’re afraid of the crowd, because everyone thought John was a prophet.” 27 So they answered Jesus, “We don’t know.”

And He said to them, “Neither will I tell you by what authority I do these things.

Did the accusers know how to respond?  Perhaps they did but were afraid to express their ideas because the error of their thinking would be exposed. They had been led into self-examination and, therefore, became trapped by their illogical legalism. It should be noted that moderate Pharisees were followers of the School of Hillel. The strict Pharisees and most of those who most frequently challenged Jesus were followers of the School of Shammai.[6] The students and rabbis of these two influential theological schools not only confronted Jesus, but they also confronted each other in numerous public debates and dialogues.  In the example below, Jesus initiated the question to the Pharisees concerning the identity of the ancestry of the Son, the Christ.

41 While the Pharisees were together, Jesus questioned them, 42 “What do you think about the Messiah? Whose Son is He?”

43 He asked them, “How is it then, that David, inspired by the Spirit, calls Him ‘Lord’:

44 The Lord declared to my Lord, ‘Sit at My right hand until I put Your enemies under Your feet’?

45 “If David calls Him ‘Lord,’ how then can the Messiah be his Son?” 46 No one was able to answer Him at all, and from that day no one dared to question Him anymore.

If His accusers were truly interested in learning more of Him, the conversation would have   continued.  They would have been honest enough to recognize their own shortcomings.  Since they had only their self-rewarding interests, Jesus did not respond with an answer. He knew His words would not be accepted (Lk. 22:67).  Today’s ultra-orthodox Jews in Israel follow the same restrictive legalism, as did the top echelon of first century Pharisees.

Socrates may have developed the dialectic argument or he may have borrowed it from the Jews. That issue is not as important as the fact that this style of debate has a history in the Jewish culture centuries long before the famed philosopher. 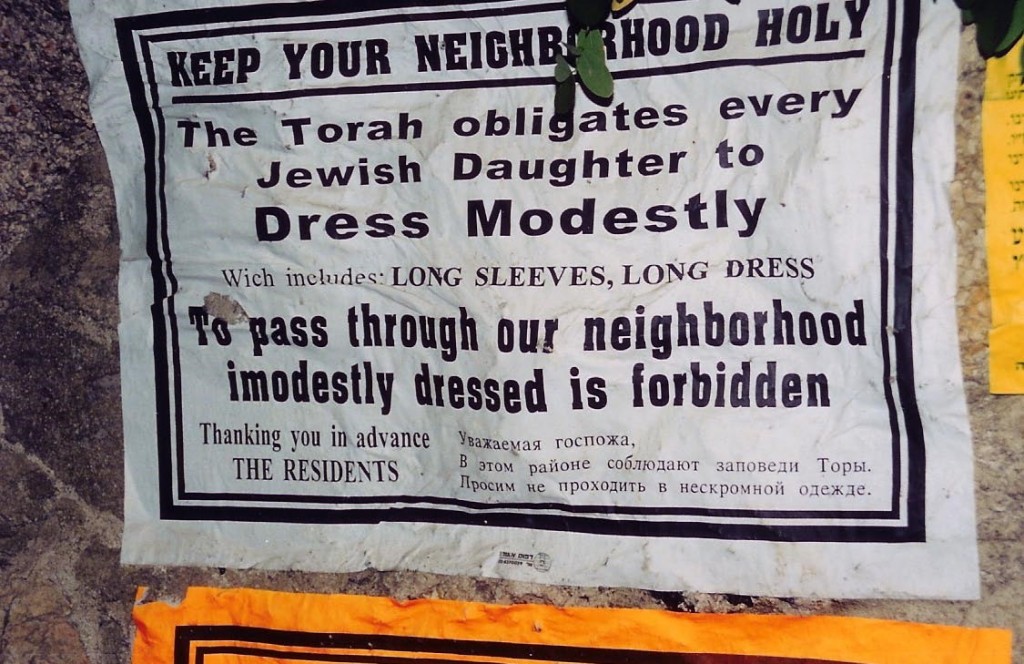 07.03.01.A. A SIGN OF MODERN OBSERVANCE OF ANCIENT PURITY. A modern warning sign posted by the ultra-orthodox Jews in their Jerusalem neighborhood reflects similar legalistic concerns, much as the Pharisees did in the time of Christ. This sign in Jerusalem warns pedestrians to wear modest clothing. Photograph by the author.

[5]. Some versions, such as the King James Version, state “If one of you has an ass (donkey) or an ox that falls into a well…”