33 Then they said to Him, “John’s disciples fast often and say prayers, and those of the Pharisees do the same, but Yours eat and drink.”

34 Jesus said to them, “You can’t make the wedding guests fast while the groom is with them, can you? 35 But the time will come when the groom will be taken away from them — then they will fast in those days.”

36 He also told them a parable: “No one tears a patch from a new garment and puts it on an old garment. Otherwise, not only will he tear the new, but also the piece from the new garment will not match the old. 37 And no one puts new wine into old wineskins. Otherwise, the new wine will burst the skins, it will spill, and the skins will be ruined.  38 But new wine should be put into fresh wineskins. 39 And no one, after drinking old wine, wants new, because he says, ‘The old is better.’”

Fasting was prescribed in the Torah for only one day in the year, the Day of Atonement.[1] The Pharisees, however, prided themselves on fasting twice a week – on Mondays and Thursdays, the same days the markets were open.[2] Ironically, after being in the public view for a few hours, they went home and bathed themselves to remove the defilement they perceived to have received by being among the common people.  The issue of fasting illustrates the difference between the legalism of the Pharisaic leadership and the motivating condition of the heart. Jesus did not preach against weekly fasting; only the evil attitude that the leading Pharisees connected with it. For this reason, the practice of fasting two days a week continued in the early Jewish church. The Didache, an early church book of instruction, states that believers should not fast on Mondays and Tuesdays as do the hypocrites[3] (Pharisees), but rather on Wednesdays and Fridays (Didache 8:1). The Jewish believers did not want to be identified with their Pharisaic counterparts.  This reveals that first century Christian worship was molded in the Jewish pattern.

“The groom will be taken away from them.”  This is clear wedding imagery.[4] It was to capture their attention because this was the first mention Jesus made of His death.  While Israel saw the messiah as one who would destroy her enemies, restore her fortunes, and build her into an international superpower, Jesus had a different plan.  He saw the deeper and more important need of the forgiveness of sin and the restoration of humanity into the image of God as was initially created.  Later, as the Passion Week approached, His words concerning His death became more direct.

Jesus compared His presence to the time a bride and bridegroom were together in their first week of marriage. Weddings lasted between three to seven days, depending on the wealth of the family.  There were no honeymoons at that time, and after the ceremony, the couple was inundated with family and visitors who wished them well.  This was the most joyful time of their lives, with an abundant celebration and food. Jesus related His time on earth with that week – a type of honeymoon period – and fasting could wait until He would be gone. By the way, the guests of the bridegroom is a reference to the disciples, and if there is one thing the guests at a wedding party don’t do, it is fasting!

“New garment . . . fresh (new) wineskins.”  Jesus did not challenge the Mosaic Laws, but challenged the traditions the religious leaders had placed upon the people. By the use of this metaphor of garments and wineskins, He gave a hint that He was about to usher in a new work, a New Covenant. A major issue of Christian scholars is their underestimation of the powerful influence of the Oral Law. They have often stated, and continue to say, that the imagery of old garments and old wine skin is a reference to the Old Covenant. However, Jesus said that one does not patch an old garment nor place new wine in an old wine skin.  He was not referring to an Old Covenant but rather, He was stating He was not going to “fix” the Oral Law.[5]

Rabbis had an obsession with observing all of the Oral laws. As stated previously, their oral traditions established “a fence” around the Written Law, to insure they would never break them and consequently, be thrown out of the country as happened between the years 605 and 586 B.C., when the Babylonians drove them into exile. 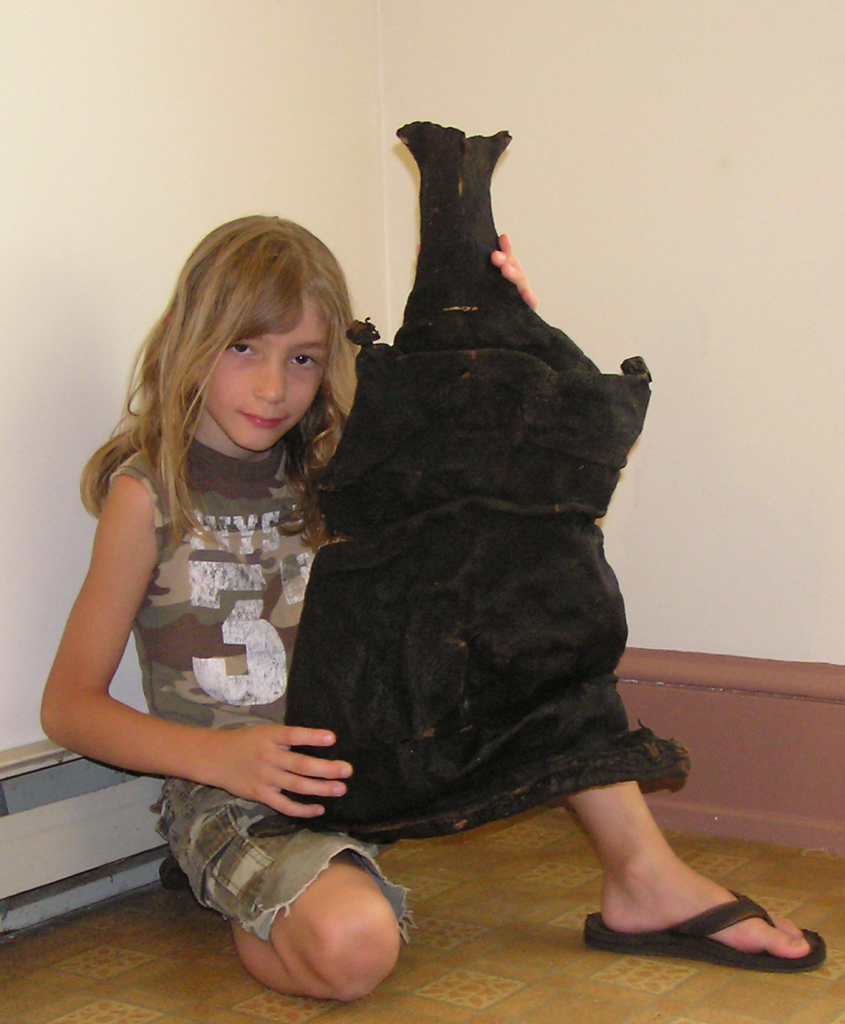 07.01.03.A. AN OLD WINESKIN.  Josiah, the author’s grandson, holds an old wineskin made from a sheep or goat that was typical of biblical times. After skins were used for fermenting grape juice into wine, they served as waterskins. They maintained the shape of the animal from which they were made.  The leather stayed pliable as long as it contained a liquid, but once it dried, it developed small cracks and became useless like this one. Photograph by a proud grandpa.

The problem of interpretation for the religious leaders stems from the fact that they believed their Oral Law came from Moses.  Their tradition says it came from Moses,[8] but in reality, it originated with Ezra and Nehemiah.[9]  So they were steeped in self-deception and chose to remain blind to protect their status, wealth and social influences.[10]

[5]. For further studies on this important subject, see the literature produced by Dr. Arnold Fruchtenbaum of Ariel Ministries in San Antonio, Texas. Dr. Fruchtenbaum expands upon the Jewish roots of Christianity and the Jewish background of the gospels.