THE PARALYTIC IS HEALED

Lk. 17 On one of those days while He was teaching, Pharisees and teachers of the law were sitting there who had come from every village of Galilee and Judea, and also from Jerusalem. And the Lord’s power to heal was in Him.

Mk. 2 So many people gathered together that there was no more room, not even in the doorway, and He was speaking the message to them. 3 Then they came to Him bringing a paralytic, carried by four men, 4a since they were not able to bring him to Jesus because of the crowd.

Lk.  19 Since they could not find a way to bring him in because of the crowd, they went up on the roof and lowered him on the mat through the roof tiles into the middle of the crowd before Jesus. 20 Seeing their faith He said, “Friend, your sins are forgiven you.”

An overlooked issue of this passage is related to the design and construction of a first century home. The typical home was so small that it would have been ridiculous to dig a hole through the roof for the purpose of lowering a paralyzed man.  The average room was only about 150 to 200 square feet. Therefore, there is an excellent probability that this miracle occurred in the larger home of a wealthy family, who, surprisingly, may not have objected to the damage being done to their expensive roof.  This opinion of wealth is implied by Luke’s report of the tile roofing material, as this construction method had only recently been introduced to this area by the Romans in 63 B.C. (see “through the roof tiles” below) and was rather expensive. 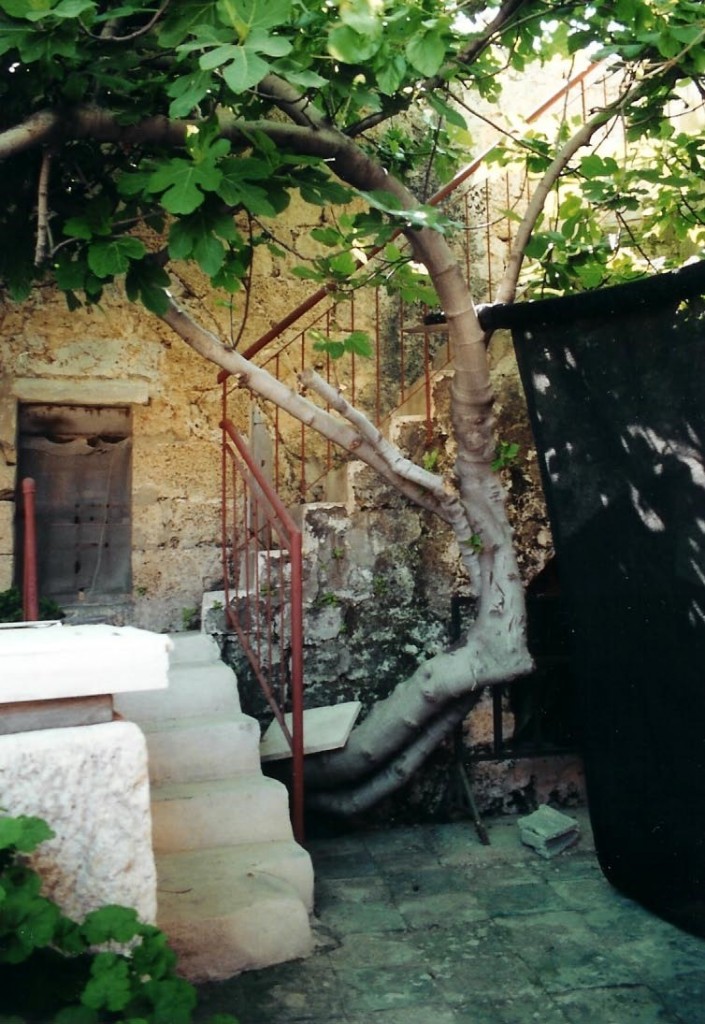 06.03.09.A. TYPICAL OUTSIDE STEPS TO THE ROOF.  Steps to the roof or second floor were generally placed along the outside wall of the house.  Roofs were nearly flat and collected water for cisterns during the rainy season so the family could have drinking water during the long, hot, dry summer. Roofs were also used as a sleeping area during hot summer nights.  This 16th century house in Jaffa is built upon the traditional site of the home of Simon the Tanner (Acts 10:32).  Photograph by the author.

“Pharisees and teachers of the law were sitting there who had come from every village of Galilee and Judea, and also from Jerusalem.” By this time Jesus definitely had the attention of everyone, especially the Sanhedrin.[1]  Every religious leader who had any influence in a local synagogue came to hear Him. But according to Jewish protocol, the Sadducees and aristocratic upper echelon of the Pharisees of Jerusalem did not come.  Rather, they sent their emissaries to observe Jesus. Sending an emissary was the same as personally coming.  Later however, they themselves came.

It was well known that Jesus was an outstanding Torah teacher. He was not only popular with His clear message and pleasant personality, but He also presented new interpretations or posek halakhah (legal judgments).[2] But since He was not an academically trained rabbi, according to rabbinic rules, He had no authority to present new ideas or interpretations. Hence, they watched His every move.

The healing of the leper had definitely caught everyone’s attention.  Jewish leaders for centuries classified this miracle as one to be attributed to the messiah.  Furthermore, they believed the One who could heal could also forgive sins.  But that “One” was none other than Jesus who was problematic for them.  Hence, when Jesus healed and forgave sins, He was declaring that He was God. That horrified them!

“Through the roof tiles.”  Roofs of peasant homes were generally constructed by one of two methods.

then covered with mud, and compacted with a roller. The compacted mud was then plastered to make it water resistant.[3]

mud, compacted with a roller and plastered.

The former type was used throughout Israel, with the exception of some communities in northern Galilee. Both construction styles were prone to water leakage and constant maintenance. However, when the Romans arrived in 63 B.C., they introduced baked roofing tiles, which were first used on the more affluent homes.[4]  Such tiles would have been used on roofs constructed with tree branches or timbers rather than stone slabs.   Houses with dressed stone walls, plastered interior walls, and tile roofs clearly reflected a family of higher economic status in life.[5] 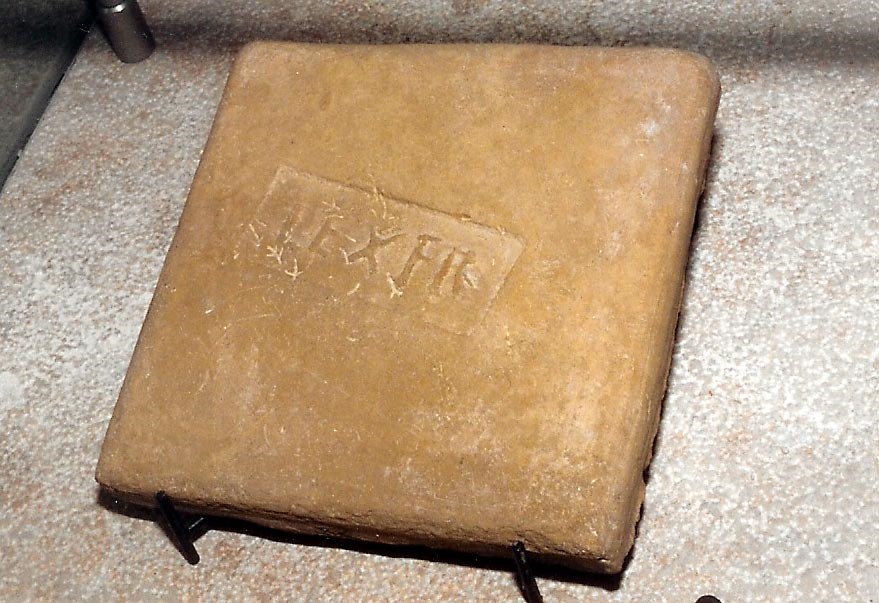 06.03.09.B. ROMAN ROOF TILE. Roman roofing tiles were introduced to the Jewish community by the Romans in 63 B.C. and were commonly used on the homes of affluent families. The initials “LEG-X-F” represent Legio X Fretensis.”  Photograph by the author at the Haifa Museum.

“Their faith.”  This miracle is one of unique illustration.  While there is no mention of the faith of the sick paralytic, the writers Matthew (9:2), Mark (2:5), and Luke (5:20) specifically mention that it was “their faith” that prompted the healing.  This implies the paralytic may not have had faith for his own healing, but his four friends did and, therefore, he received the healing. Like the term belief, the word faith has two critical components. 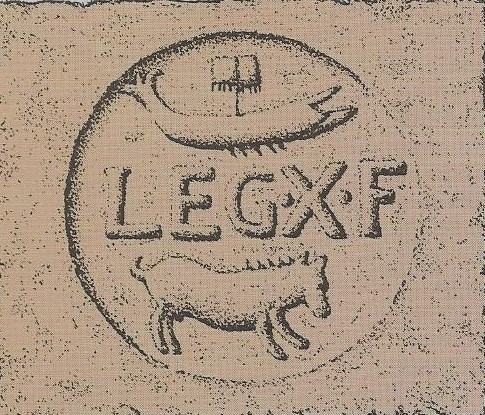 06.03.09.C. ROOF TILE WITH TENTH ROMAN LEGION INSCRIPTION.  A illustration of a roof tile with the engraved image of a ship and a wild boar was found in Jerusalem. In the center of the seal are the initials “LEG-X-F” that represented “Legio X Fretensis.” Courtesy of Dan Bahat.[6]

Jesus made a stunning statement when He said, “Friend, your sins are forgiven you.”  In Mark’s narrative Jesus used the word teknon that means child or son.[7] It is a word of endearment that reflects the compassion and love that the leading Pharisees lacked. The statement, “your sins are forgiven you.” is used 13 times in the Hebrew Bible, including nine times in the Torah.[8]  It should be noted that the religious leaders forgot the discussion Nathan had with King David.  After the king repented, Nathan said,

The Lord has taken away your sin; you will not die.

In that case, Nathan did not forgive David’s sin, but rather, he conveyed God’s forgiveness and assured David of it.  However, when Jesus forgave sin, He did so by the authority and power of God Almighty. This phrase was reserved for God alone and the Pharisees were horrified when Jesus used it. When Moses wrote Leviticus chapters 4, 5, and 6, he used the passive Hebrew voice.  When Jesus said it, He also used the passive voice, a bold self-proclamation of deity.[9]

Nonetheless, there must have been some who questioned, “Where is the evidence that His statement, ‘your sins are forgiven,’ is permitted and ratified in heaven?” Anyone could have said this with a degree of boldness.  Jesus attested His right and power to do that which, by its very nature, lies outside of the realm of visible proof.[10] Therefore, He performed the miracle of healing to convey to the audience that He did, in fact, have divine power to perform a messianic miracle.

It had not occurred to them that God might take on human form.  No one had ever performed these kinds of miracles before, and yet Jesus performed all three messianic miracles that demonstrated His deity and for this reason, the Jewish leadership responded with, “He’s blaspheming!”

Since the Jews were so intent on an expected political-messiah, they could not imagine a messiah who would heal the sick, raise the dead, and forgive sins.  Their preconceived ideas blinded them to the fulfillment of Old Testament prophecies about the ministry of Jesus.  Ironically, from their own tradition is an interesting verse recorded later in the Babylonian Talmud that reads,

This sick man is not healed

Until all his sins are forgiven him.

As previously stated, Jews, Greeks and Romans also associated illnesses with sin.  There was an association between those who were sick and their physician; the sick were to pattern their behavior after their healer.  The Greek writer Lucian (120-185 A.D.) preserved this interesting account, in which the sick are to get well by not becoming angry or excited, which were seen as “sins.”

He (Demonax) never was known to make an uproar or excite himself or get angry, even if he had to rebuke someone; though he assailed sins, he forgave sinners thinking that one should pattern after doctors who heal sicknesses but felt no anger at the sick.  He considered that it is human to err, divine or all but divine to set right what has gone amiss.

Lucian of Samosata and others like him were in sharp contrast to Jesus who simply healed people and told them not to continue in their sinful lifestyle. Some critics claim that Jesus did not understand His Messiahship because he failed to specifically tell the people He was the Messiah.  Unfortunately, these critics fail to realize that Jesus frequently demonstrated His Messiahship and deity. Throughout history there have been many who claimed to be the Messiah, but only Jesus demonstrated His calling.

[1]. When the gospel writers used terms such as “Jews from Jerusalem,” or “Pharisees and scribes from Jerusalem,” or similar statements ending with “from Jerusalem,” these persons were generally representatives of the Sanhedrin who came to listen, observe, and eventually challenged both John the Baptist and Jesus. Bookman, When God Wore Sandals. CD Trac 5.

[3]. To make plaster, the ancients burned limestone for 72 hours until it became a heavy dust. Then they added water and placed it on the walls with a trowel.  Because limestone is about thirty percent water, the burning process required considerable fuel. The result was that during the Roman period many areas were deforested. SOURCE: Interview with Arie bar David, tour guide and lecturer in August, 1999.

[10]. See also 11.02.20.Q1 “What are the three examples of where Jesus claimed divine authority that brought Him into conflict with the religious establishment?”