21 Then they went into Capernaum, and right away He entered the synagogue on the Sabbath and began to teach. 22 They were astonished at His teaching because, unlike the scribes, He was teaching them as one having authority.

Capernaum was an economic center for trade and international commerce and a popular stopping point for caravans that traveled between Europe, Asia, and northern Africa. It was here where Jesus located the center of His ministry. When he spoke in the synagogue, “they were astonished at His teaching.” Not only would the community people have been there, but also the traveling Jewish merchants would have attended and heard Him speak. Evidently Jesus left quite an impression, because previously He had acquired five disciples before He performed any miracles.

As a child, Jesus attended the local synagogue school in Nazareth and had no further education.  Since He was not a seminary graduate and not ordained as a rabbi, He was not permitted to introduce a new interpretation, but He gave new insights and explained the ideals of the Kingdom of God with compassion and love.  Furthermore, He taught with authority.  Rabbis frequently quoted famous rabbis in their sermons.  Jesus, however, said, “I say….” In essence, He said He was His own authority. Later this became more pronounced when He forgave sins, an act only God could do. 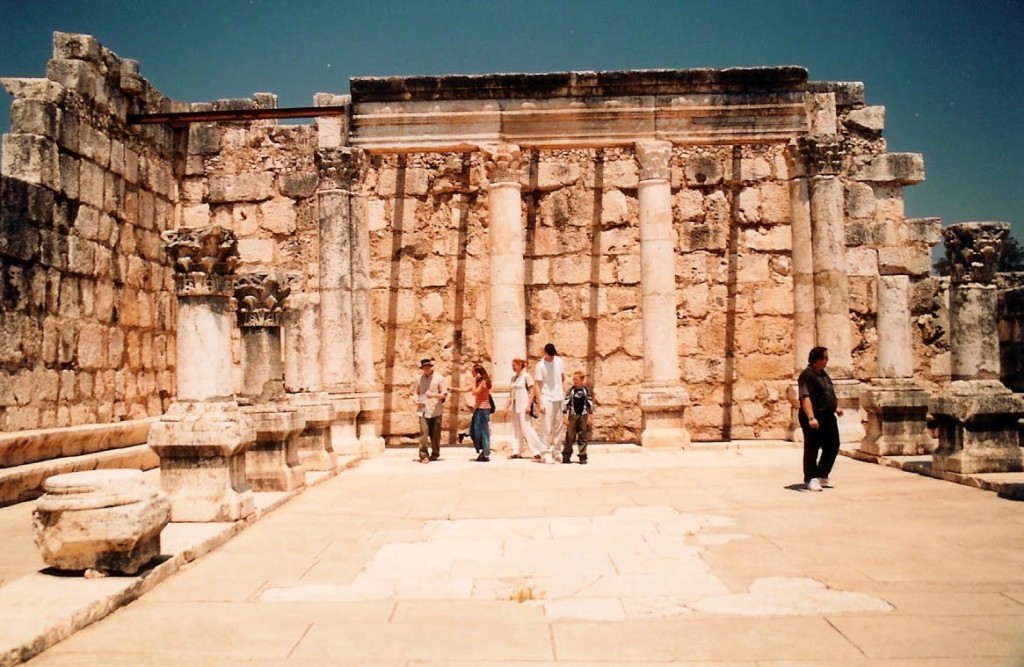 06.03.02.A. SYNAGOGUE AT CAPERNAUM.  This late 3rd or early 4th century A.D. synagogue was made of white-colored limestone and constructed directly on top of the original synagogue in which Jesus preached. The massive columns and size of the sanctuary dwarf visitors.  Photograph by the author.

At Capernaum traveling caravans loaded with goods, travelers, and religious pilgrims frequently stopped there for fresh supplies and salted fish.[1] Local craftsmen carved millstones and grinding stones from local volcanic basalt rock and sold them to traveling merchants. The Roman command post was located there, near today’s Greek Orthodox Church as evidenced by the ruins of a Roman bathhouse.  That is probably where a centurion and his soldiers insured that travelers paid their taxes to a tax collector named Matthew.[2] 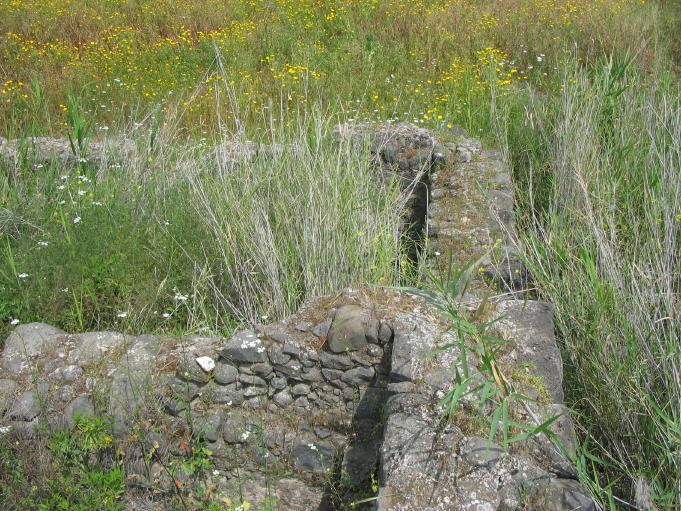 06.03.02.B. RUINS OF THE ROMAN BATHHOUSE AT CAPERNAUM. Grass and weeds bury the first century Roman bathhouse at Greek Orthodox Church in Capernaum. It is evidence of the presence of a Roman station that insured that travelers paid taxes to the agent of Rome – Matthew. Photograph by the author.

While Capernaum was known as a fishing village and a rest area for traveling caravans, there were probably several other industries located there as well. The surrounding farmland from Chorizim to Gadara was known for its excellent wheat that was used in the temple[3] and was also sold to caravans for export.  Archaeologists have unearthed glass vessels that suggest a glass making industry or glass merchant, as well as dozens of grinding stones and stone implements made of the locally-found basalt rock.[4] These discoveries led them to conclude that the village had at least two thriving manufacturing industries. 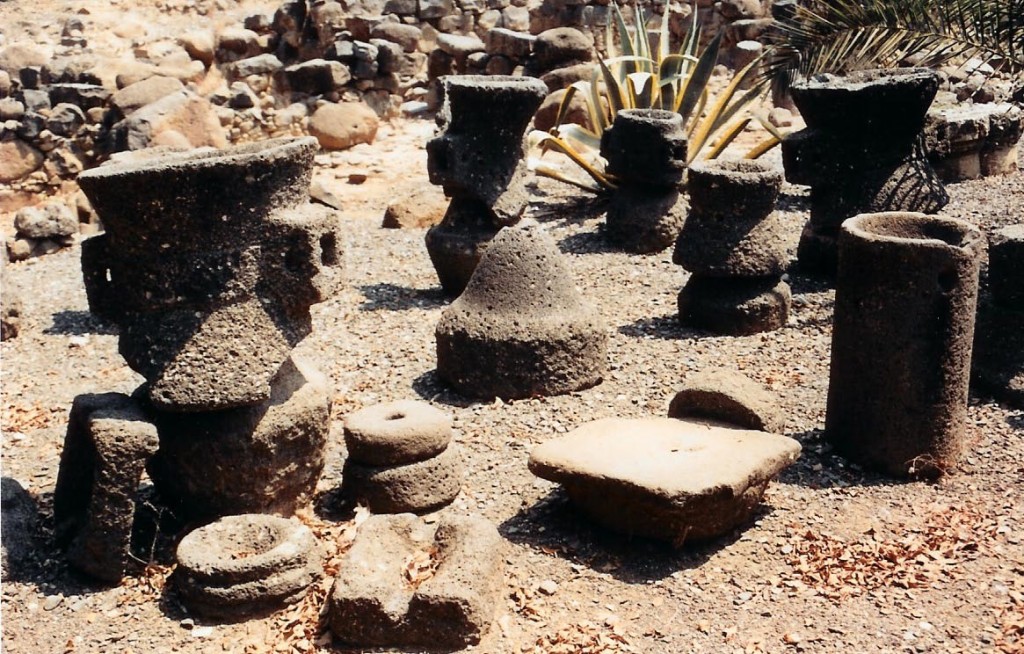 06.03.02.C. BASALT GRINDING STONES.  Dozens volcanic basalt grinding stones have been uncovered in Capernaum, leading archaeologists to suspect there may have been a thriving stone industry in Capernaum at the time of Jesus.  Photograph by the author.

The following image can be found in the full single-volume eBook of Mysteries of the Messiah as well as in the corresponding mini-volume. Search for the following reference number: 06.03.02.D. A CACHE OF GLASS VESSELS. Large quantities of glass vessels uncovered in Capernaum have led some archaeologists to consider the possibility of a glass merchant in the town. That in turn suggests Capernaum may have been a commercial center larger than was previously considered. Photograph by Stanislao Loffreda.

One of the fantastic treasures of Capernaum is the ruins of the house of Peter. The ruins of the village were first explored and identified by Edward Robinson. In the following years the Roman Catholic Franciscans protected the site from vandalism and began archaeological excavations. They uncovered a cache of glass vessels, basalt grinding stones of various sizes, and the home of St. Peter. Possibly most the interesting discovery is the collection of plaster pieces with various graffiti writings on them that identified the site as the former church that was built upon the ruins of St. Peter’s home.

The identity of where Peter and his family once lived has been preserved by an interesting event. Queen Helena, the mother of Constantine the Great, came to the Holy Land in the early fourth century.  She honored the home of St. Peter by building a basilica over it that had three concentric octagons.[5]  Her purpose was to preserve the location of the holy site.[6]

The following image can be found in the full single-volume eBook of Mysteries of the Messiah as well as in the corresponding mini-volume. Search for the following reference number: 06.03.02.E. DECORATED PLASTER PIECES FROM PETER’S HOME.  Decorated plaster of floral design (3RD – 5TH century) and graffiti was found in the home / Church (or Basilica) of St. Peter.[7] The graffiti, written in nine languages, suggest that pilgrims from many countries visited this location.[8]

A Spanish nun, Egeria in the years 381-384[9] toured the Holy Land and visited the home of Peter. She noted that the Apostle’s home had been converted into a small church and made these comments:

The house of the prince of the apostles (St. Peter) in Capernaum was changed into a church; the walls, however, (of the house) are still standing as they were (in the past).

The foundations of Queen Helena’s basilica were also identified by an Italian pilgrim who came from the village of Piacenza in about the year 570. He stated that:

We came to Capernaum in St. Peter’s house, which at present is a basilica.

06.03.02.F. OCTAGONAL BYZANTINE FOUNDATIONS OVER PETER’S HOME.   The ruins of Capernaum as seen from the air looking toward the Sea of Galilee. The three concentric octagonal walls on the left are the remains of a Byzantine church that was built around Saint Peter’s house. Today a Catholic shrine is suspended over the site.  To the right are the partially reconstructed walls of the late 3rd century (A.D.) synagogue that was built over the synagogue in which Jesus taught. Photograph by Wikipedia Commons.

[3]. Sources disagree on whether wheat from this area was used in the temple. While the quality was considered excellent, the Talmud (Men. 85a) states that distance made it prohibitive to ship it to Jerusalem.  However, that may not have been the real reason because other sources state that no sacrifice could be taken across a defiled area such as Samaria in route to Jerusalem and, therefore, wheat from this area could not be used for the Omer sacrifice.

[5].  It was not until excavations in 1968 that archaeologist discovered an apse and a baptistery, making it possible to identify this structure as a basilica. See  http://theosophical.wordpress.com/2011/09/16/biblical-archaeology-38-peter%E2%80%99s-house-in-capernaum/ Retrieved September 18, 2012.

[7].  It was not until excavations in 1968 that archaeologist discovered an apse and a baptistery, making it possible to identify this structure as a basilica. See  http://theosophical.wordpress.com/2011/09/16/biblical-archaeology-38-peter%E2%80%99s-house-in-capernaum/

[11]. Quoted by Loffreda, Recovering Capharnaum. 66; The work of Piacenza, Itinerarium, in English is Itinerary. Quoted by Wilkerson, Jerusalem Pilgrims Before the Crusades. 69; See also Piccirillo. “The Sanctuaries of the Baptism on the East Bank of the Jordan River.” 440-41.