PETER AND THE CATCH OF FISH

Lk. 1As the crowd was pressing in on Jesus to hear God’s word, He was standing by Lake Gennesaret. 2 He saw two boats at the edge of the lake; the fishermen had left them and were washing their nets. 3 He got into one of the boats, which belonged to Simon, and asked him to put out a little from the land. Then He sat down and was teaching the crowds from the boat.

4 When He had finished speaking, He said to Simon, “Put out into deep water and let down your nets for a catch.”

5 “Master,” Simon replied, “we’ve worked hard all night long and caught nothing! But at Your word, I’ll let down the nets.”

6 When they did this, they caught a great number of fish, and their nets began to tear.    7 So they signaled to their partners in the other boat to come and help them; they came and filled both boats so full that they began to sink.

8 When Simon Peter saw this, he fell at Jesus’ knees and said, “Go away from me, because I’m a sinful man, Lord!” 9 For he and all those with him were amazed at the catch of fish they took, 10 and so were James and John, Zebedee’s sons, who were Simon’s partners.

“Don’t be afraid,” Jesus told Simon. “From now on you will be catching people!”          11 Then they brought the boats to land, left everything, and followed Him.

Mt. 18 As He was walking along the Sea of Galilee, He saw two brothers, Simon, who was called Peter, and his brother Andrew. They were casting a net into the sea, since they were fishermen.

20 Immediately they left their nets and followed Him.

21 Going on from there, He saw two other brothers, James the son of Zebedee, and his brother John. They were in a boat with Zebedee their father, mending their nets, and He called them. 22 Immediately they left the boat and their father and followed Him.

These two passages from Luke and Matthew were two separate events. They happen to be placed together due to their similarities. However, before discussing the biblical passage, some background information is needed relative to fishing in the Sea of Galilee. Simon Peter and his brother Andrew were fishermen and James and John, the sons of Zebedee, were their business partners. The fish they caught were usually dried, salted and sold to traveling caravans while fresh fish were taken quickly to nearby markets such as Tiberias, Nazareth, and Sepphoris.  Their business did not make them wealthy, but did provide for all their needs. Yet soon they would find sufficient reason to leave the business to Zebedee and follow Jesus.

Then Jesus, who was not a fisherman, came by and gave some instruction to professional fishermen that produced outstanding results. A huge catch of fish in daylight was caught when fish are normally caught only at night.  Since the Sea of Galilee has always been abundant with fish, failure to catch any at night was unheard of and, therefore, a miracle.  At night the fish swim close to the surface to feed, but during the daylight hours they descend to the depths of the lake. It was common knowledge that daylight fishing was an exercise in futility. For a carpenter to tell professional fishermen how to fish was totally out of character, especially during daylight hours – a most unusual event.

Therefore, when Jesus called Simon Peter and his brother Andrew to follow him, they knew they were going with Someone special.  Yet they would not know to what extent “special” was until after His death and resurrection. John 1:35 indicates that Andrew was a disciple of John the Baptist, and possibly Peter as well. Little wonder then, that when Jesus spoke to Simon Peter, Peter addressed Him as “Master.”

It has been said that a great man can transform ordinary people into great people. The lives of the disciples would be transformed dramatically – beyond their wildest dreams. In the course of time, their human frailties would be exposed, but the power of God would transform them into healers of the sick and soldiers of the cross.

As to the profession of fishing, the trammel net was the ideal net for use at night.  It is a series of three nets close together, which are “hung” in the water like a vertical curtain.  Along one edge is a series of floats and along the opposite edge is a series of weights.  The net is suspended in a semi-circular fashion near the shore and slowly the two ends are drawn together causing many fish to be caught.[1] At night the fish swim between the nets and become tangled.  This type of net, while very effective for catching fish, also catches seaweed and “unclean” fish.  Therefore, the net needs to be cleaned and unacceptable fish removed. 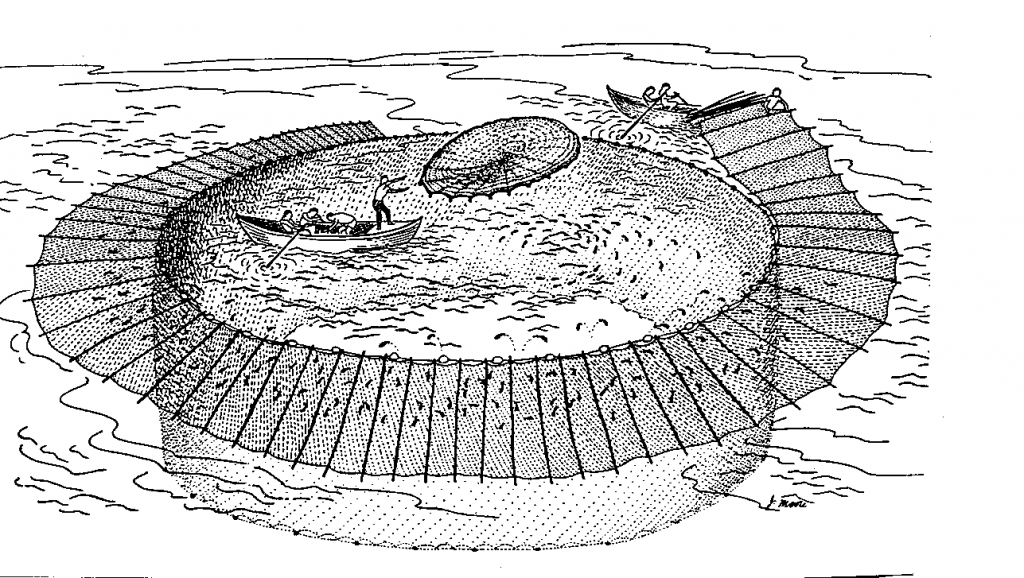 06.03.01.A. AN ILLUSTRATION OF NIGHT FISHING WITH A TRAMMEL NET. This illustration shows the trammel net being hung in the water in a circular manner.

In summary, there are two important aspects to this miracle.

Jesus clearly demonstrated his authority over nature and creation; they recognized Him as having some unusual divine powers which caused Peter to immediately confess himself as a sinful man (v. 8). The irony is that Peter, while catching dozens of fish into his net, was himself caught in the net of Jesus. Peter’s view of Jesus was more than that of a teacher, as he called Him “Master,” In contrast to John, who called Him “Rabbi.” At a future time Peter received a second calling when a “Stranger” along the shore told him to recast his net and that resulted in a catch of 153 fish. 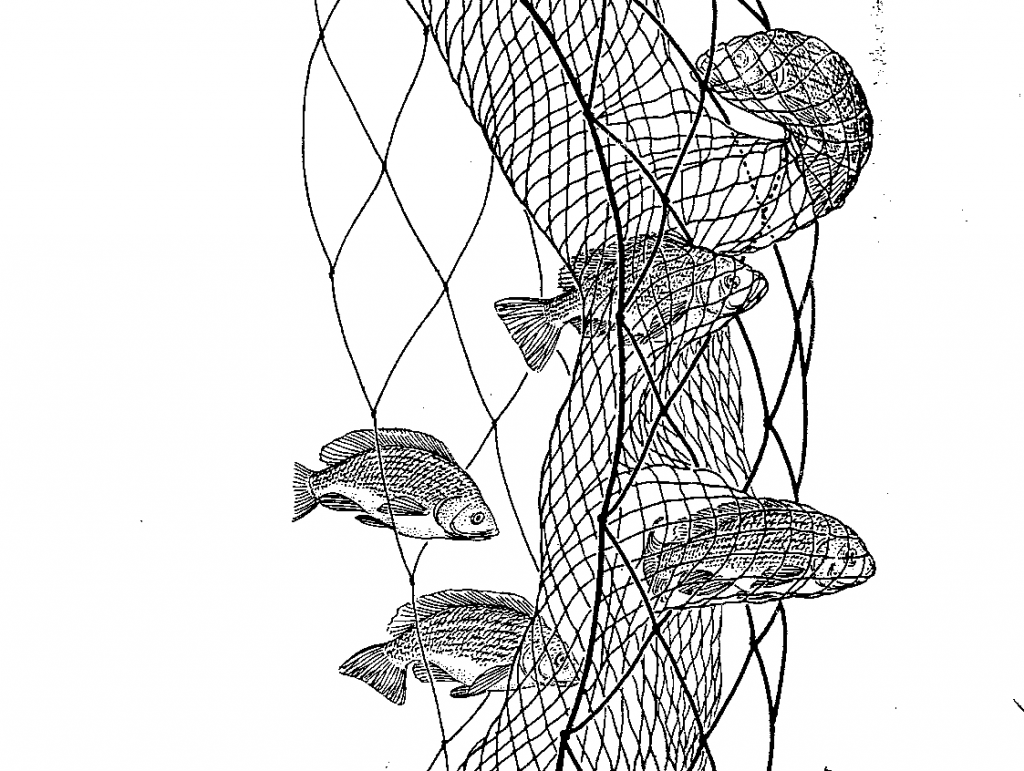 06.03.01.B. AN ILLUSTRATION OF HOW FISH ARE CAUGHT IN A TRAMMEL NET.  A trammel net is a three-layered net in which the fish become tangled and caught. Fishing was done close to the shore at night when the fish could not see the linen net. Today nylon nets are used for day fishing because the fish cannot see them.

“’Master,’ Simon replied.” Luke used the Greek word epistates, which means teacher, boss, or master. Simon Peter clearly recognized that he was speaking with someone who had unusual authority and power. In verse 5 Simon Peter called Him kyrios, meaning Lord.[2]

There is a second type of net that is occasionally used in the Sea of Galilee.  When Matthew said, “They were casting a net into the sea,” he was referring to a cast-net that in Greek is amphiblestron.[3] A cast-net is any net that is thrown around or over something to restrict its motion and was used for fishing as well as for wild game and even people in games or war.[4]

In Matthew it was the casting net (Gk. amphiblestron 293)[5] that was laid over the shoulder of the fisherman, who then cast it carefully into the water from the shore or a boat.[6] It was ideally used at night when the fish did not see the net coming all around them and they were trapped inside.  The net was then pulled ashore and the fish were separated – the bad from the good.[7]  This parable teaches there will be a time when God will separate the bad from the good – it is the tenor of the Bible, along with the encouraging call to follow the ways of our Lord. 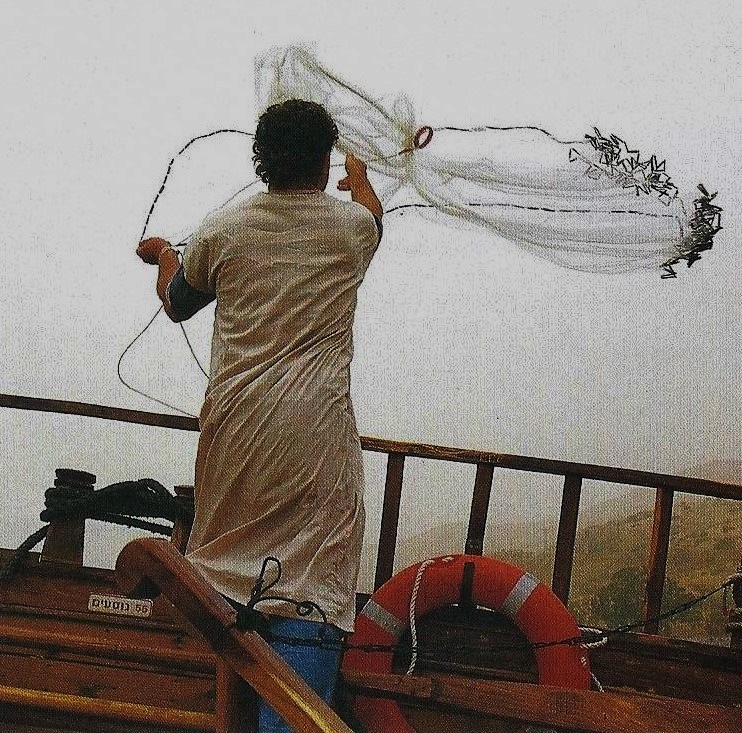 06.03.01.C. CASTING A STANDARD CASTING NET. Fishermen today still cast their nets as they did in the time of Jesus. Photograph by Jeane Conte.

If Jesus would have been a typical rabbi, He would have asked the disciples to learn the Torah, become competent of the Oral Law, master the hermeneutics of biblical interpretation, and memorize the traditions and quotations of previous important rabbis. But rather, Jesus simply said, “Follow Me.” They did and “immediately they left.”  This phrase illustrates the commitment the disciples had because the fishing nets were expensive. But they would simply not leave anything of such value lying on the shore. In all probability, their father Zebedee took the nets and continued the fishing business.  The miracle was to be seen later as the backdrop or metaphor of the time when they would become fishers of men.

Finally, it should be noted that Satan is also a fisherman (2 Tim. 2:26) and desires to catch men. He is the impersonator of Christ, luring as many as he can with his counterfeit deeds and message. 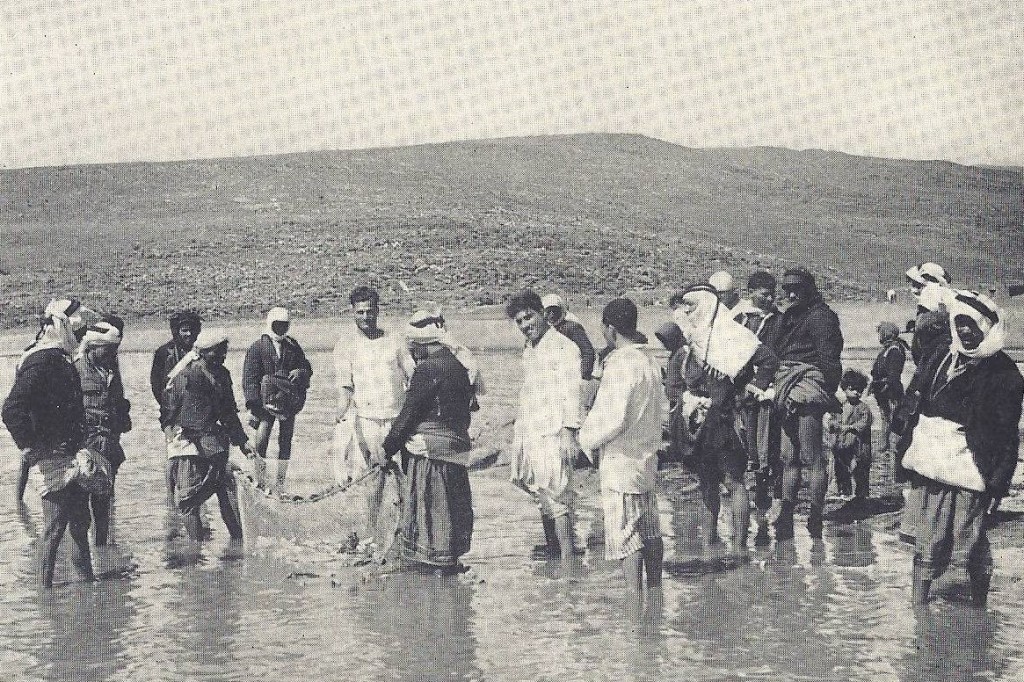 06.03.01.D. CLEANING FISHING NETS. Arab fishermen in the 1920s are shown cleaning their nets in the Sea of Galilee in a similar manner as was done in the first century. Cleaning involves the removal of unwanted fish and vegetation. Note the barren hillside in the background.  Photograph by H.V. Horton. 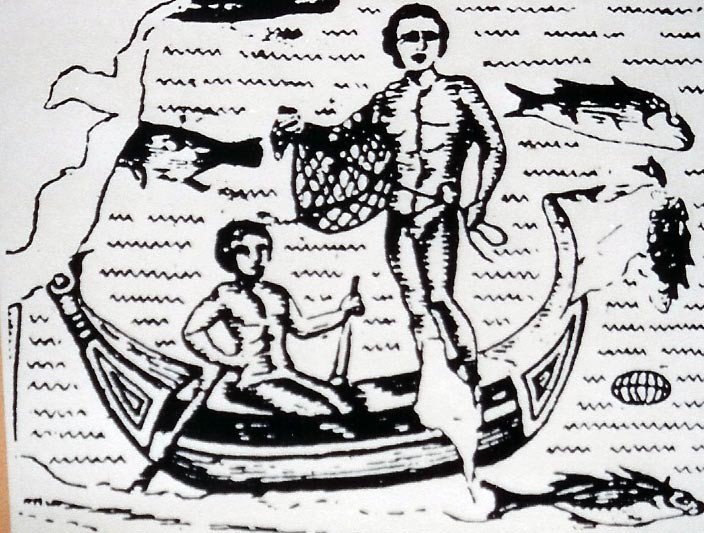 06.03.01.E. AN OLD ILLUSTRATION OF FISHERMEN FISHING WITH A CAST-NET. This illustration taken from a Roman mosaic in north Africa depicts  a fisherman with a cast-net wearing only a loin cloth, but in doing so, he was  considered to be “nude.”