46 Then He went again to Cana of Galilee, where He had turned the water into wine. There was a certain royal official whose son was ill at Capernaum. 47 When this man heard that Jesus had come from Judea into Galilee, he went to Him and pleaded with Him to come down and heal his son, for he was about to die.

48 Jesus told him, “Unless you people see signs and wonders, you will not believe.”

50 “Go,” Jesus told him, “your son will live.” The man believed what Jesus said to him and departed.

51 While he was still going down, his slaves met him saying that his boy was alive. 52 He asked them at what time he got better. “Yesterday at seven in the morning the fever left him,” they answered. 53 The father realized this was the very hour at which Jesus had told him, “Your son will live.” Then he himself believed, along with his whole household.

54 This, therefore, was the second sign Jesus performed after He came from Judea to Galilee.

This account has given critics fuel for argument because the parallel passages in the Synoptic Gospels have a number of differences compared with the book of John.  Most scholars believe all four gospel writers refer to the same event, but that may not be the case.  For the purpose of this study and eBook, the narrative as recorded by John is presented.  However, as stated, Matthew, Mark and Luke may have recorded a similar but separate account.  Note the following differences:

This is the second of seven miracles recorded by John although Jesus obviously performed hundreds of others.[1] It was not only stunning for Jesus to heal people, but in doing so, He identified Himself with God without saying a word. Not only was Jesus of gentle authority, but when He healed, the audience reflected upon one of the names of God – Jehovah Rapha – our Lord who is our Healer.[2] Furthermore, John’s selection of seven miracles represent wholeness and completeness and, in this case, the perfect Person who performed them.

“A certain royal official.”  Some scholars believe that the official was Manaen (or Menahem), the foster brother of Herod Antipas, who eventually became a prophet and teacher (Acts 13:1).  Others believe the official was Chuza, the personal steward or epitropos, of Herod Antipas, the tetrarch of Galilee.[3] It was the responsibility of the epitropos to care for the king’s personal property and investments. It is uncertain if the official was Jewish, given the Roman practice. In addition to Manaen, Joanna (or Johanna), the wife of Chuza was one of the women who also supported Jesus and His disciples (Lk. 8:3; cf. verse 53).[4]  Both were affiliated with Antipas.

By this time, the provincial capital of Galilee had been moved from Sepphoris to Tiberius, which was located along the western shore of the Sea of Galilee and a few miles south of Capernaum.  Since the ministry of Jesus centered in Capernaum, travelers along the Via Maris and the government officials in nearby Tiberias, heard of Jesus’ reputation. The royal official went from the Tiberius-Capernaum area to Cana to meet Jesus.  He evidently had incredible faith in the ability for Jesus to heal, as the distance is not only about eighteen miles, but it is also a long uphill walk. The ancients walked quickly at a pace like a military march of today; not the modern slow walk of two or three miles per hour, but a faster pace of four to five miles per hour.  The Sea of Galilee is 680 feet below sea level and Cana is about 1600 feet above sea level. No one would have undertaken such a physical challenge if there was not a passionate motivation.

Finally, there were many who pondered if Jesus was the expected messiah who would bring them freedom. Simon the Zealot may have considered this as well.  However, when Jesus healed the son of the royal official, the hopes and dreams of many Zealots were crushed. That was reinforced when Jesus said that one should carry a burdon “a second mile,” an obvious implication of occasional Roman military commands. They did not realize, until later, the dynamics of Jesus and the freedom that He would bring.

People believed that illnesses were the consequences of sin.  How appropriate that Jesus was the Great Healer, since He came to save men from their sins.  While the healing of the human body did not save anyone from sin, the act of healing provided striking evidence to the observers, that Jesus saves lost souls from the consequences of sin.[5] Miracles were not the intended end, but gave overwhelming evidence concerning the identity of Jesus.

Considering the social and political tensions of the time, for a Jew to heal a Roman or his servant was unthinkable. This had a profound effect because most Jews believed God was interested only in them. In fact, many dismissed any thought of Gentile conversions and questioned how God could select one of their own to heal the son of a Roman official of the horrible Herodian dynasty. Yet even within the halls of government, the Spirit of God was convicting the lost. Manaen, a foster-brother and official to Herod, became a believer.  His and other conversions were beyond Jewish comprehension.[6]

The short dialog between the centurion and Jesus is most interesting. The Greek language of the centurion’s request indicates he repeatedly asked Jesus to heal his servant, because he was desperate and the young man was near death. This underscores the faith he had in Jesus although the request was probably humiliating (Jews were despised by most Romans).  The boy’s father had assumed that Jesus needed to be beside his son physically in order to perform the miracle (cf. Jn. 11:1-37). Jesus, however, demonstrated His power over distance by simply speaking His Word of healing. Once Jesus pronounced his son healed, it would seem natural for the centurion to hurry home to confirm the miracle. But he didn’t.  In fact, he stayed in the area and did not begin his return trip until the following day.  In this case, there was a double miracle – an absent child was healed of his sickness and the father was healed of his unbelief.

The passage reads that on the following day, as the centurion was walking home, he met his servants who came to tell him of the boy’s healing.  The time of the healing was confirmed to have occurred at the 7th hour (1:00 p.m.), but the centurion was not surprised at the news. Note the interesting progression in the narrative:

Again, news of the miracles that Jesus performed traveled quickly. Many believed in Him as the result of Him cleansing of the temple (Jn. 2:23; 3:2), and they had returned to their homes in the Galilee area.  Now Jesus was requested to perform another miracle in the same area where He once turned water into wine. Two statements were made by these miracles – without a single word spoken.

After this event, some of the chronological experiences of Jesus’ life are difficult to ascertain.  John focused his gospel on the events in Judea,[7] yet he did not mention the miracles in Galilee.

On a side note, critics have long said Capernaum was a poor and isolated village with little or no significance to either the Jewish or the Gentile world.  But the fact that a Roman garrison was there speaks volumes of its significance. Archaeologists discovered a Roman bathhouse, which verifies their presence.[8] The town was a caravan stop that had a commercial center with major fishing and basalt stone products industries.[9]  There is also evidence to suggest there was at least a small facility to sell glass vessels or manufacture them.[10]

The following image can be found in the full single-volume eBook of Mysteries of the Messiah as well as in the corresponding mini-volume. Search for the following reference number: 06.01.07.A. A MOSAIC OF A FIRST CENTURY FISHING BOAT. This mosaic of a first century fishing boat is believed to be typical of those used on the Sea of Galilee by the fishermen who were called by Jesus to become His disciples. Photograph by the author at Capernaum.

The following image can be found in the full single-volume eBook of Mysteries of the Messiah as well as in the corresponding mini-volume. Search for the following reference number: 06.01.07.B. THE SO-CALLED “JESUS BOAT.”  During a severe drought in 1986, an ancient fishing boat was discovered in the mud along the shores of the Sea of Galilee.  The hull matches well with the first century mosaic tile picture and has been nicknamed the “Jesus boat.” An image of the mosaic is projected on the wall so visitors see the similarities. Photograph courtesy of Kibbutz Ginnosar.

It is difficult to imagine what daily life was like in those days. In Capernaum, homes consisted of several rooms clustered around an open courtyard, which was the center of family activities.  Rooms were essentially for the storage of personal items and sleeping during the cold and rainy months.[11] Bathrooms within homes did not exist except in the palaces of the aristocrats and kings. Noticeably missing from the village was a well, since a lake of fresh water was nearby.  Dried food and crop seeds were stored in clay jars.  The Galilee area was extremely fertile and productive with wheat, fruits, and vegetables, all of which contributed to the economic growth of a mixed community of Jews and Gentiles. 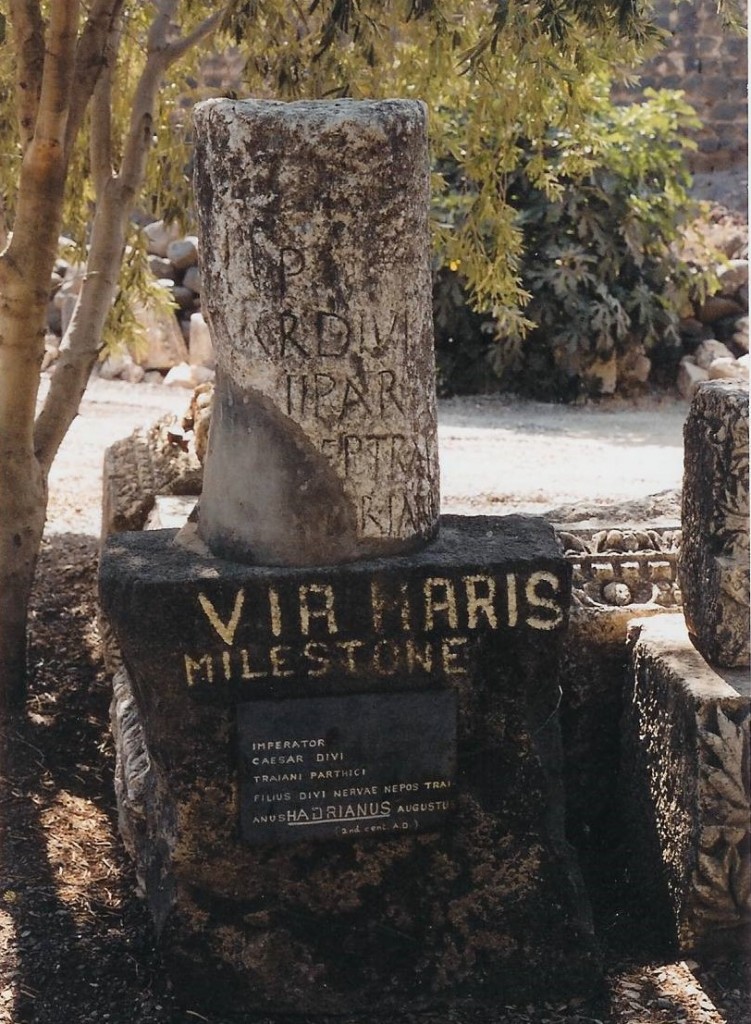 06.01.07.C. A ROMAN MILESTONE AT CAPERNAUM. An early second century milestone, discovered at Capernaum, was most likely made by soldiers. When not at war or military practice, they functioned as road builders, highway engineers, pursued highway bandits, and pursued caravans who attempted to evade the tax collector. Photograph by the author at Capernaum. The translation reads as follows:

06.01.07.D. ROMAN MILESTONE INSCRIPTION. The inscription was written in Latin, the official language of the Roman Empire. Damaged and illegible letters appear in lower case.[12]  Translation of the Latin inscription reads, “The Emperor Caesar, son of the divine Trajan who conquered the Parthians, grandson of the divine Nerva, Trajan Hadrian Augustus.”[13] Notice the reference to divinity.

[2]. See “Jesus, the Fulfiller of Selected Names of God” in Appendix 32 for additional attributes.

[10]. Loffreda, Recovering Capharnaum. 20. Some scholars have suggested these glass vessels were imported from Phoenicia for the purpose of selling them to caravans.