19 This is John’s testimony when the Jews from Jerusalem sent priests and Levites to ask him, “Who are you?”

20 He did not refuse to answer, but he declared: “I am not the Messiah.”

“Are you the Prophet?”

22 “Who are you, then?” they asked. “We need to give an answer to those who sent us. What can you tell us about yourself?”

24 Now they had been sent from the Pharisees. 25 So they asked him, “Why then do you baptize if you aren’t the Messiah, or Elijah, or the Prophet?”

26 “I baptize with water,” John answered them. “Someone stands among you, but you don’t know Him. 27 He is the One coming after me, whose sandal strap I’m not worthy to untie.”

28 All this happened in Bethany across the Jordan, where John was baptizing.

During the previous four centuries not a single prophet spoke to the Jewish people, even though expectations of a messiah were growing exponentially. Then the miraculous births of two babies caused a public sensation. John the Baptist, the first of these infants, when he reached the age of service had a following that evidently grew quickly.  As the son of a priest, the temple personnel anticipated his immergence as a prophet – and he did not disappoint them. But they were not thrilled about his message. The Pharisees could not accept John’s lifestyle of self-denial, of fasting, avoiding wine, but neither could they later accept Jesus who did not fast and enjoyed wine.

John preached to those living in the desert areas near Jericho and the Dead Sea, but it is unknown if he traveled extensively elsewhere. Jesus preached in the Galilee area through which ran the Via Maris, an international route of many caravans and travelers. John’s area of ministry appears not to have crossed the Via Maris, although he was close to the major roads leading to and from Jericho. So his message was more confined to the Jewish population, especially to the priests and Levites, many of whom lived in Jericho.  Yet his message was carried far and wide as evidenced in Acts 19 when the Apostle Paul met a couple in Ephesus who were followers of John, but they had not heard of Jesus.

As stated previously, the Jews and many other people groups were expecting a messiah (small “m”) who would be a political leader and resurrect the Davidic Empire of a millennium past.  Therefore, the Sadducees, priests, and Levites asked John if he was the Christ, Elijah, or the Prophet.  Each time John denied the identification but said that One greater than he was about to come.

“John’s Testimony.”  When the New Testament writers used terms such as “testimony” or “bore witness” or “I have seen and testify,” these were statements of legal terminology. These were also common in the Roman and Greek cultures whereby the author placed himself under an oath concerning the truthfulness of the statement made.[1]

“When the Jews from Jerusalem sent priests and Levites.”  The priests and Levites were usually Pharisees, and in this case, the leading Jews[2] of the temple sent them.[3]  This group was an official delegation from the Sanhedrin that came specifically to ask questions to determine if John claimed to be the Messiah.[4] (Later, when Jesus confronted the leading Pharisees, they were part of the same aristocratic leadership.[5])  The temple was controlled by the high priestly family of Annas whose son-in-law, Caiaphas, held the position of High Priest. The more conservative religious party, the Pharisees (v. 24), accompanied them.  Everyone listened carefully to what John had to say so they could determine if he could be the expected revolutionary political-messiah. The Sadducees did not want a political-messiah to ruin their comfortable and corrupt lifestyle. The common people, however, were anxiously waiting for a messiah who would relieve their economic oppression and cleanse the temple of the religious corruption.

Into this religious caldron came John the Baptist, who had the audacity to publicly condemn all of the religious leaders. Everyone was aware of their corruption and arrogance, and while many priests and Levites were not within that greedy clique, their leadership definitely was. Some may have remembered John’s miraculous birth to an elderly priestly family, but others were so steeped in a corrupt lifestyle that they cared little about any miracles or the truth of God’s Word.

“I am not the Messiah.” Since the expectation of a coming messiah was so intense, John knew what the priests and Levites were going to ask, “Are you the messiah (Christos in Greek)?”  The word “messiah” to Jewish minds was the one whom God was to send who would restore adherence to the Torah, overthrow the Roman Empire, usher in the Davidic Covenant, and expand the land of Israel to the geographical boundaries of the Davidic Kingdom.  Most significantly, their concept of the messiah would make the Jewish nation the international superpower. They had to ask, if John was this man or was he the return of Elijah who would announce the coming of their Messiah. He immediately responded and his incessant words left no peace with anyone.  He made his point clear and precise.

The declaration clearly reveals the expectation of the messiah. The term Messiah means the Anointed One[6] and was used in reference to anointing a king for his special service (1 Sam. 16:1, 13; 21:11).  It was also applied to the priest and his special service (Ex. 40:13-15; Lev. 4:3).  While the Old Testament language describes the anointing of any king or priest, John specifically spoke of the Anointed One.

But there was a reason when they asked the question, “Are you Elijah?”  The question had to be asked because John’s dress and lifestyle was that of the ancient prophet. By doing so John followed the Jewish tradition of emphasizing the importance of his message and work. Two examples are Jeremiah and Ezekiel.

After John’s 30th birthday, the priests, Levites, and even Sadducees took special attention. So when they saw him dressed like Elijah and listened to his message, they immediately recognized him to be a prophet – the first in nearly four centuries. Later, when Jesus said Elijah had already come, He meant that John fulfilled the Elijah prophecy – John was not the physical return of Elijah, but fulfilled the prophetic words of earlier prophets.

“Are you the Prophet?”  There clearly was some serious questioning taking place. But the word “prophet” often had direct implications for the expectant political-messiah who would defeat the Romans. Among the various Jewish sects, there were debates as to whether Deuteronomy 18:15 was a reference to a prophet like Elijah, or if this was a messianic prophecy – a deliverer. But most were thinking of a political-messiah like Moses led his people out of Egyptian bondage.  People interpreted Malachi 4:5 to expect a literal return of Elijah because he never died (2 Kg. 2:11).  Some believed Elijah would return and announce the end of the world.  The message of John, however, was a fulfillment of the prophecies of Elijah, namely that he (John) was the one who would announce the coming of the true messiah. Therefore, John denied that he was the Christ, Elijah, or “the prophet” of Deuteronomy 18:15.  He was not the reincarnation of Elijah; but he did hold the office of Elijah.  Within that office, John prepared the people to hear the words that would come from Jesus (Mal. 4:5-6). Yet he did not replicate any of the profound miracles that Elijah performed; he functioned only within the limits needed to prepare the way for Jesus. Those who accepted the messages of the Baptist and of Jesus had recognized that Elijah had come.

“Make straight the way of the Lord.”  Kings would go to war in the springtime after the winter rains produced abundant crops, but the roads were frequently damaged by those rains.  Therefore, they sent out road crews to repair roads not only for their armies, but also for commerce. The phrase, “make straight the way for the Lord,” had direct implication that a king was soon to come.

From the Dead Sea Scrolls is a comment that shows that even the Essenes were expecting the messiah to come. They also believed that they needed to be purified from the evils of this world and go out into the desert wilderness and prepare the way for the Lord. For new members, that “purification” was defined not only by holy living, but also by studying the Torah.  Note the following:

And when these become members of the Community of Israel according to all these rules, they shall separate from the habitation of unjust men and shall go into the wilderness to prepare there the way of Him; as it is written “Prepare in the wilderness the way of …, make straight in the desert a path for our God” (Isa. 40:3). This (path) is the study of the Law which He commanded by the hand of Moses, that they may do according to all that has been revealed from age to age, and as the Prophets have revealed by His Holy Spirit.

“All this happened in Bethany across the Jordan.” The name of the village, Bethany, is believed by many scholars to be the shortened version of “Bethabara,” meaning house of the crossing.[8]  The area east of the Jordan River was known as Perea, although that name was seldom used. Bethany/Bethabara was located a short distance above the Dead Sea in modern Jordan and was where John the Baptist preached and where he baptized Jesus. The phrase, “house of the crossing,” is an extremely powerful image because John was ushering a new era of the Messiah at the same site where the Israelites crossed the River Jordan and entered the Promised Land – a new era for life.[9]

Clearly there is an apparent contradiction between these two passages.  However, the meaning goes beyond the literal understanding of the words. Assume for a moment that the conversation would have taken place with modern terms. When John was asked “Are you Elijah?” he probably would have said, “No. My name is John.” The context of the passage is a request for a physical identity, not a prophetic one. John also denied being “the Prophet” because that had messianic implications. 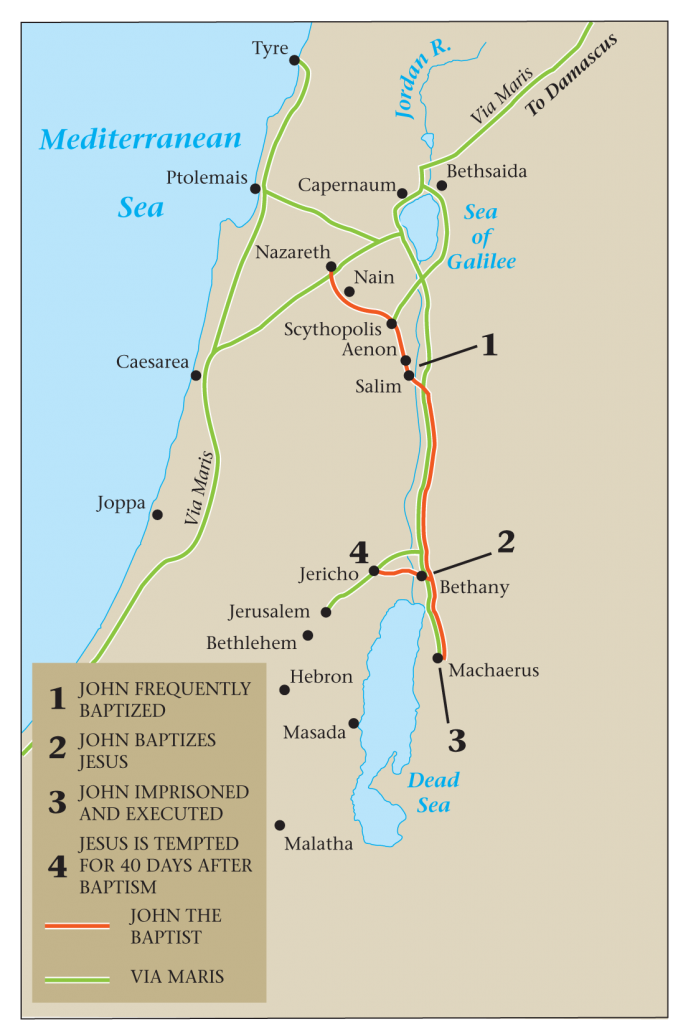 05.03.01.Z MAP OF THE TRAVEL ROUTE OF JOHN THE BAPTIST.  Little is known of the travels of John the Baptist. Scholars believe his primary area of ministry was above the Dead Sea, on both sides of the Jordan River. See also the 6th century Madaba Mosaic Map (05.02.03.Z) depicting “Bethany beond the Jordan.” Courtesy of International Mapping and Dan Przywara.

[2]. The leading Jews in this case would have been the Sadducees and or leading Pharisees.

[4]. When the gospel writers used terms such as “Jews from Jerusalem” or “Pharisees and scribes from Jerusalem” or similar statements ending with “from Jerusalem,” these persons were generally representatives of the Sanhedrin who came to listen, observe, and eventually challenge both John the Baptist and Jesus. Bookman, When God Wore Sandals. CD Trac 5.