15 Now the people were waiting expectantly, and all of them were debating in their minds whether John might be the Messiah. 16 John answered them all, “I baptize you with water, but One is coming who is more powerful than I. I am not worthy to untie the strap of His sandals. He will baptize you with the Holy Spirit and fire.

17 His winnowing shovel is in His hand to clear His threshing floor and gather the wheat into His barn, but the chaff He will burn up with a fire that never goes out.” 18 Then, along with many other exhortations, he proclaimed good news to the people.

The value of the perspectives of the four gospel writers is clearly evident in this case. In the public introduction of Jesus, each writer clearly reveals his passionate message.

It has been said that the gospels are a unique genre – not a letter (Gk. epistle), but a kind of written report that functioned as an informative advertisement.[1] Jesus came to reveal that the eternal was not the future, but the unseen that exists now.  To know God is not an endless pursuit, but a condition of the present reality that is available to everyone.  God is not a philosophy or an abstraction, but a divine being with character and personality who desires all men to attain His character and personality.  However, humanity could only understand the divine message, if the Divine lived among them. To communicate this concept, the expressions of “Son of Man” and “Son of God,” express the deity of Jesus,[2] but the former title also asserts His humanity.[3]

“I am not worthy to untie the strap of His sandals.” It was customary for a slave or servant to untie the sandals of a visitor and wash his feet when entering a house.[4]  The English word slave or servant is derived from the Greek term doulos.[5] A doulos was a common household slave who performed the most menial of all household chores.  Here the gospel writer declares that John was so humbled at the presence of Jesus, that he was not worthy to perform this most menial act of servanthood (cf. 1 Sam 25:41).[6]

Throughout the Middle East, in ancient times and today, feet are considered defiled.[7] The reason is that roads and walkways are dirty, dusty, and covered with animal dung. Throughout most of history, wherever anyone walked, livestock did likewise and, therefore, avoiding animal dung was impossible. That is why sandals were removed when entering a home and if there were no servants or slaves to wash the visitor’s feet, then it was the woman’s responsibility to do so.

“Holy Spirit and fire.”  Some scholars believe this phrase refers to the indwelling of the Holy Spirit within the followers of Jesus; being on “fire” for God. Jesus said that they would be immersed in the Ruach HaKodesh, meaning Holy Spirit,[8] which began at Acts 2:1ff. (See other opinion below.) However, the term “Holy Spirit” must be understood in the Jewish context because the full Christian understanding of it did not occur until after the ascension. In Jewish thought and philosophy the Holy Spirit had two primary functions.[9]

John used the term precisely within the Jewish definition and understanding of the Old Testament time. He was preaching the divine truth and people began to follow Him, listening carefully to His teaching. He did not perform any miracles at this time.

Others believe this phrase to be a purifying event that will separate the wicked Jews from the righteous ones as described in Malachi 3:19-21; 4:1-3, and Psalm 1:6.  The separation was described in agricultural terms. When wheat was harvested, the kernel had to be separated from the wheat chaff. To accomplish this, the wheat was placed on a threshing floor and was lightly crushed with a threshing sled pulled by a donkey. The next step is called “winnowing,” when the wheat was tossed into the air so that the wind, blowing across a threshing floor, blew the chaff to the side and the heavier wheat kernels fell to the ground. The chaff was collected and burned, hence, the vivid imagery of pending judgment in hell.  The prophets stated that the Messiah would destroy His enemies with His fiery breath (cf. Isa. 11:4; 30:27-28). The apocryphal writer 4th Ezra restated this prevailing thought:

After this I looked, and behold, all who had gathered together against him, to wage war with him were much afraid, yet dared to fight. And behold, when he saw the onrush of the approaching multitude, he neither lifted up his hand or held a spear or any weapon of war, but I saw only how he sent forth his mouth as if it were a stream of fire, and from his lips a flaming breath, and from his tongue he shot forth a  storm of sparks.  All of these were mingled together…, fell on the onrushing multitude, which was prepared to fight, and burned them all up.

The Israelites always associated fire with great events in their history.  Examples are the great covenant between Israel and God was witnessed by fire (Gen. 15:17) and when God dedicated the tabernacle with fire (Ex. 40:34). When the Israelites traveled through the wilderness they were guided by a pillar of fire; God appeared in the Burning Bush (Ex. 3:2); a fire after an earthquake (1 Kg. 19:1-12); and a fire in a cloud (Ezek. 1:4).  In the Old Testament, fire was associated with judgment and destruction of the wicked,[11] as well as purification of the righteous.[12] The early church, on the Day of Pentecost experienced the Holy Spirit and fire as the presence of God.

However, other scholars say that the term “fire” in Matthew’s gospel is never associated with the Pentecost (cf. Acts 2:3) but with judgment.[13] Furthermore, fire associated with Pentecost never suggests the chaff being blown away by the wind.

“His winnowing shovel.”   As previously stated, the term “winnowing” is an agricultural term that is associated with the separation of the wheat chaff from the wheat kernel. In this process, a fork or shovel was used to toss the wheat high into the air, at which time a crosswind blew the chaff to the side and the heavier wheat kernel fell directly to the threshing floor.[14]  In this context, the winnowing fork is representative of God’s separation of the unrepentant from the true people of God.

“Clear His threshing floor.”  To clear the threshing floor implied that Jesus would remove the judges of the Sanhedrin. The phrase was a common reference pertaining to divine judgment.  The Sanhedrin members sat in a semi-circular pattern[15] that resembled a threshing floor so all could see other members and consider carefully the significance of their judgments.[16]  The imagery was preserved in the Mishnah:

The Sanhedrin was arranged like the half of a round threshing floor so that they all might see one another.

The most famous threshing floor was the floor of Ornan (1 Ch. 21:28; 22: l), which was purchased by David and where later Solomon built his temple, followed by the temple of the first century.  This was precisely where Jesus stood before Caiaphas. The image of God was not only that of a judge between the just and unjust, but also that of the Provider for His children.

“He will burn up with a fire that never goes out.”  The chaff was burned in clay cooking stoves. John used winnowing as an analogy of judgment by an angry God who will separate the unfaithful from those who accepted salvation.  This imagery is common in the Hebrew Bible[17] and, therefore, was familiar to the audience. 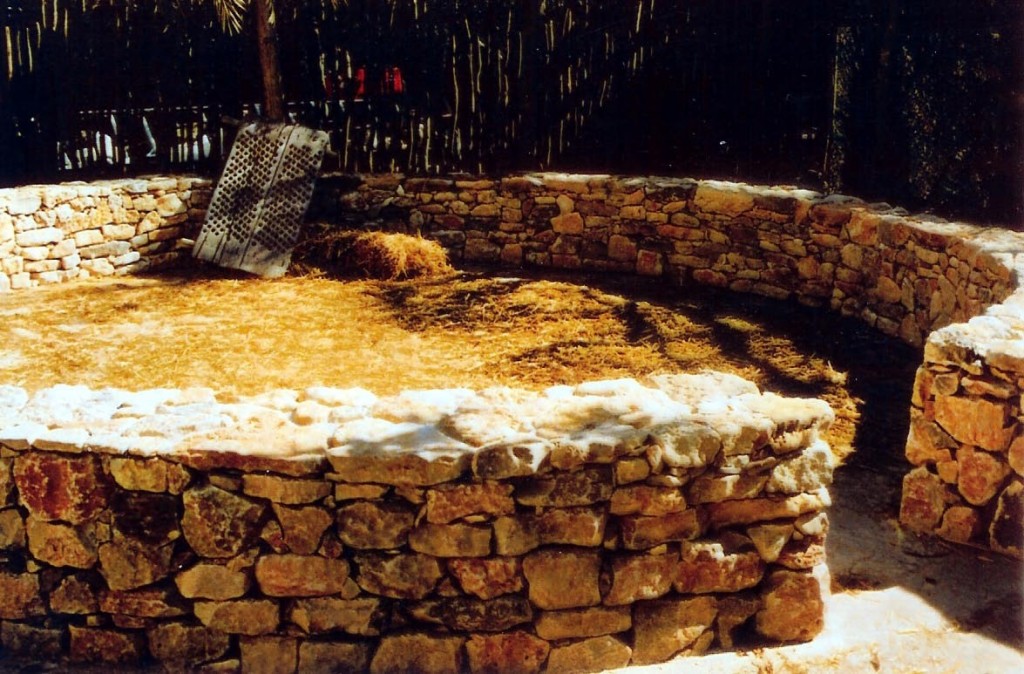 05.02.02.A. A RECONSTRUCTED THRESHING FLOOR.  The threshing floor was where villagers would lay down their barley or wheat on the ground. A donkey would then pull a threashing sled (shown leaning against the wall) over the wheat, which would loosen the chaff from the kernel. Then the wheat was winnowed by tossing it into the air.  Photographed at the Jerusalem Pilgrim Center by the author.

Bible students have often wondered if John thought that he was living at the end of the age; the age that would bring judgment upon the enemies of Israel?  The answer is clearly affirmative – yes.  At this point, John appears to believe that the messiah is an agent of God who will bring judgment upon Israel and function as the expected political-messiah.  He does not realize that his messiah is the Messiah. As will be demonstrated later, John believed that the messiah would come with fiery judgment on the wicked, and he would most certainly overthrow the Roman tyranny.   Little wonder then, that he used such strong language. 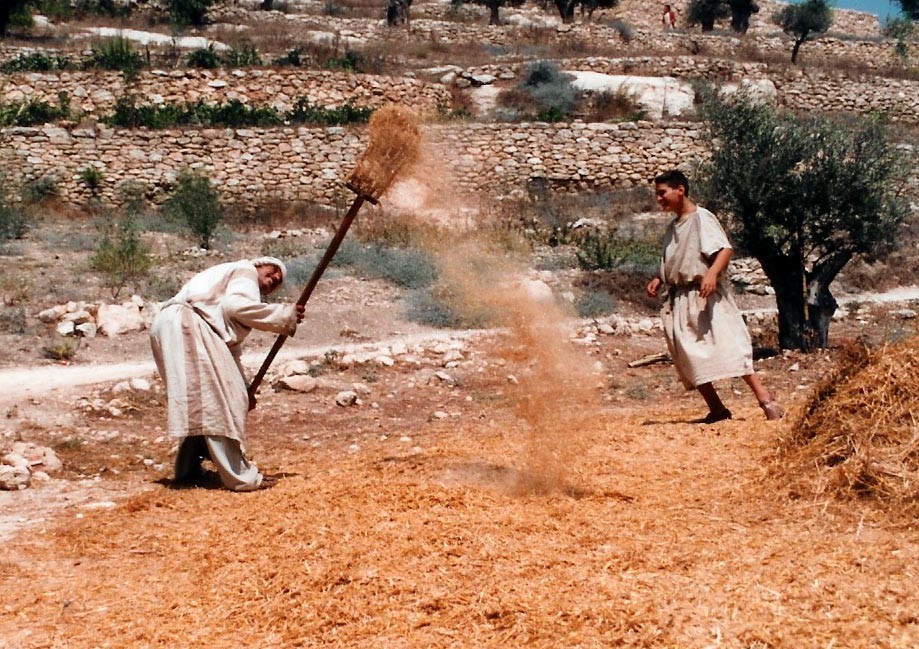 05.02.02.B. TWO BOYS WINNOWING WHEAT. Two boys, dressed in authentic first century clothes, are winnowing wheat in an open field. It is a process of throwing the wheat up into the air so the wind can blow the chaff aside while the heavier wheat kernels fall down to the threshing floor. The kernels are then gathered and the chaff is burned. Photographed at the reconstructed Nazareth Village by the author.

[1]. Mellowes and Cran, Producers. From Jesus to Christ: The First Christians. (DVD).  Part 3.

[4]. John the Baptist used figurative language that is reflective of agriculture and desert life. Therefore, he uses terms such as brood of vipers, fruits (of repentance), the axe at the root of the tree, baptism of fire, the threshing floor, and the burning of the chaff.

[10]. Scholars debate on the classification of 3rd Ezra (a/k/a 1 Esdras) and 4th Ezra (a/k/a 2nd Esdras). Sometimes these are listed in the Apocrypha (see 02.02.03) and other times they are listed in the Pseudepigrapha (see 02.02.24). The reader is reminded that quotations from non-biblical sources are not to be understood as being of equal authority with the biblical narratives. See 01.02.04.

[14]. The preferred location for threshing floors was on a hill top where there was a constant cross wind.

[15]. This custom was popular in other cultures as well, such as the Roman senate was seated in a semi-circular fashion.