9 After hearing the king, they went on their way. And there it was — the star they had seen in the east! It led them until it came and stopped above the place where the child was. 10 When they saw the star, they were overjoyed beyond measure. 11 Entering the house, they saw the child with Mary His mother, and falling to their knees, they worshiped Him. Then they opened their treasures and presented Him with gifts: gold, frankincense, and myrrh. 12 And being warned in a dream not to go back to Herod, they returned to their own country by another route.

“Entering the house.” This phrase suggests that the magi did not visit Jesus when he was in the stable manger. Evidently a sufficient amount of time had transpired following the birth to allow Joseph to take his wife and Son and move into better dwelling quarters.[1] Jesus may have been born in a stable that was probably not part of a house, but by the time the magi arrived the Holy Family had moved into a house that probably belonged to someone in Joseph’s extended family.

“Falling to their knees, they worshiped Him.” They came before the infant Jesus, knelt down on the floor, placed their foreheads on the floor, and worshiped Him. This was the method by which all honor and allegiance was offered to a king in ancient times. Such images are depicted in ancient Assyrian and Babylonian relief carvings, and the practice continues today by the Muslims in their prayers.

Then the magi arrive, they “presented him with gifts.”  These gifts of gold, frankincense, and myrrh were incredibly expensive and of prophetic significance for three reasons:

Some scholars have suggested that since the frankincense and myrrh were produced in South Arabia, the magi must have come from that region.  However, international trade was well established long before Solomon’s day.  By the second century B.C., Romans succeeded in sailing directly to South Arabia and India for the sources of perfumes and spices, and the influence of the southern Arabian kingdoms began to decline.[12] The Parthians likewise extended their international trade and influence. Therefore, the argument for the magi having originated in Arabia for that reason is diminished. Scholars believe that they could have originated in Parthia, traveled through Arabia where they purchased the myrrh and frankincense, and continued on to Jerusalem and Bethlehem.

It has often been assumed that there were three magi, and rightly so.  The biblical narrative lists only three gifts and it would have been a supreme insult if a fourth magi came and did not present a gift. In other meetings of high-level dignitaries, such insults would have resulted in armed conflict and possible death. Seneca wrote that in Parthia one could never approach a king without a gift.[13] The practice of presenting gifts to a superior was a well-established custom throughout Middle Eastern history, as well as in the Hebrew Bible.[14]  The visit by the magi was a special act of God, as was His anointing of the pagan King Cyrus II to be a ruler of peace centuries earlier.

“They returned to their own country by another route.” The routes taken by the magi have always been questioned.  The fact that they were warned in a dream suggests that they had to be extremely careful to avoid any contact with Herod, and leave as quickly and quietly as possible. That was no easy accomplishment for such an entourage. Most certainly they knew that Herod had spies and soldiers stationed along major highways and at his palace-fortresses along his eastern and southern frontiers.[15] Less than three miles from Bethlehem was the Herodian Fortress.[16] From this mountain-top facility spies could easily observe any activity in Bethlehem as well as any travelers on the roads leading to and from the village. The magi also had to avoid Jericho because it was the home to Herod’s winter palace. If they somehow slipped by Jericho and went further north to cross the Jordan River, they needed to avoid the Amathus fortress where the Jabbok River flows westward into the Jordan River – this area was known as Perea.[17]  The Jordan River can easily be forded in the summer but only at a few strategic places during the rainy season when the river is higher and swifter. To add to the danger, crocodiles were always a constant danger since there were no bridges until Roman times.[18]

If they went to Ein Gedi which is along the western side of the Dead Sea, and crossed the Dead Sea by boat, they could have been spotted by Herod’s lookouts stationed at the Machaerus Fortress.[19] On the other hand, if they traveled further south along the western edge of the Dead Sea, they would be seen from the Masada palace-fortress.  How could they or anyone else escape undetected? It has been suggested that they traveled through Nabataean territory east of the Dead Sea. There is sufficient archaeological evidence to suggest that the Nabataeans, a major geo-political power, had good commercial and political relationships with their neighboring kingdoms to the east.[20] However, the Nabataeans were among the most feared enemies of Herod the Great.[21] Since the Magi had royal credentials, they probably overnighted in the royal city of Petra, and then continued on their homeward journey. The trip home was just as much of a miracle for them as were the miracles of healing later performed by Jesus.  By divine guidance they came and by divine guidance they returned home.

The fact that God used the magi to honor the Christ child has at times been interpreted to mean that God approves of astrology along with similar arts related to witchcraft and the occult.  Nothing could be further from the truth.  Any involvement with astrology has always been strictly forbidden.[22] God, by His grace, led the magi to the Savior since many other people were also looking for a Him.  It has often been stated that the visit of the magi was indicative of the many Gentiles who would eventually come to recognize Jesus as the true Messiah.

Did Jesus endorse astrology when he said, “At that time the sign of the Son of Man will appear in the sky and all the nations of the earth will mourn” (Mt. 24:30)?  This question is in reference to Christ’s return and has two elements which some might associate with astrology.

In response to the question, it is God who created the heavens and the earth and He predicted that there will be physical signs in the sky and on the earth prior to the return of the Messiah.  These events are not related to astrology, but rather, to the events of mankind and God, who knows the future, knows what will occur and when. Not only does God not endorse astrology, He forbids it.[23]

Finally, Ephraim, the Syrian (306-373), a highly respected church deacon and theologian, wrote this poetic hymn to illustrate the distinctions between Gentile royalty and Jewish leaders:

The magi exalted from afar,

The Scribes murmured near at hand.

The Scribes showed their doctrine,

The Magi showed their offerings

It is a marvel that to Him, the Babe, they of His own house hurried with their swords

And they that were strangers (hurried) with their offerings.

– Ephraim the Syrian, Hymns on the Nativity[24]

Historians have always affirmed Herod’s complete loyalty to Rome, Therefore, this question is almost never asked, but is incredibly significant.[25]  Its importance is revealed in a summery review of the two empires:

Now the highest officials of Rome’s most powerful enemy – the Parthian Empire, returned to Jerusalem, and it appears that Herod failed to inform his superiors of the visit.  On two points, he probably committed treason. Note the following:

Rather, he killed all the newborn boys in Bethlehem, but by then the Holy Family had escaped to Egypt. The fact that the magi had also escaped without informing him of the new king’s identity or location would be worrisome for the rest of his life.

At this point it is important to mention a word about the chronology of Jewish writings. Note that the following passage in Luke omits the account of the Holy Family traveling to Egypt. This suggests to the modern reader that immediately after ceremonial observances were completed in the temple, Joseph, Mary, and Jesus returned to Nazareth, and the magi probably visited them there.

When Joseph and Mary had done everything required by the Law of the Lord, they returned to Galilee to their own town of Nazareth.

If the gospel of Luke was the only record, that interpretation would have been accepted. However, there are two other considerations.

There was another horrific event that occurred about this time.  Even though Herod the Great was rather ill and understood the sensitivities of the Jewish people, he decreed that a large golden eagle be placed above the great gate entrance of the temple (see 03.06.04, no. 15). This angered the Jews for two reasons:

In response, two rabbis, Judas and Matthias, had their students pull down the eagle — an act of defiance. They managed to cut down the icon but were captured by the soldiers who were in the nearby Antonia Fortress.  It was a deadly decision as an outraged paranoid dictator had the rabbis and forty of their students burned alive.[27]

This was a time when the slightest infraction law resulted in deadly consequences. Roman law was never intended to offer just punishment that fit the crime; it was to punish the accused so severely that the population would be fearful to do such an act again. 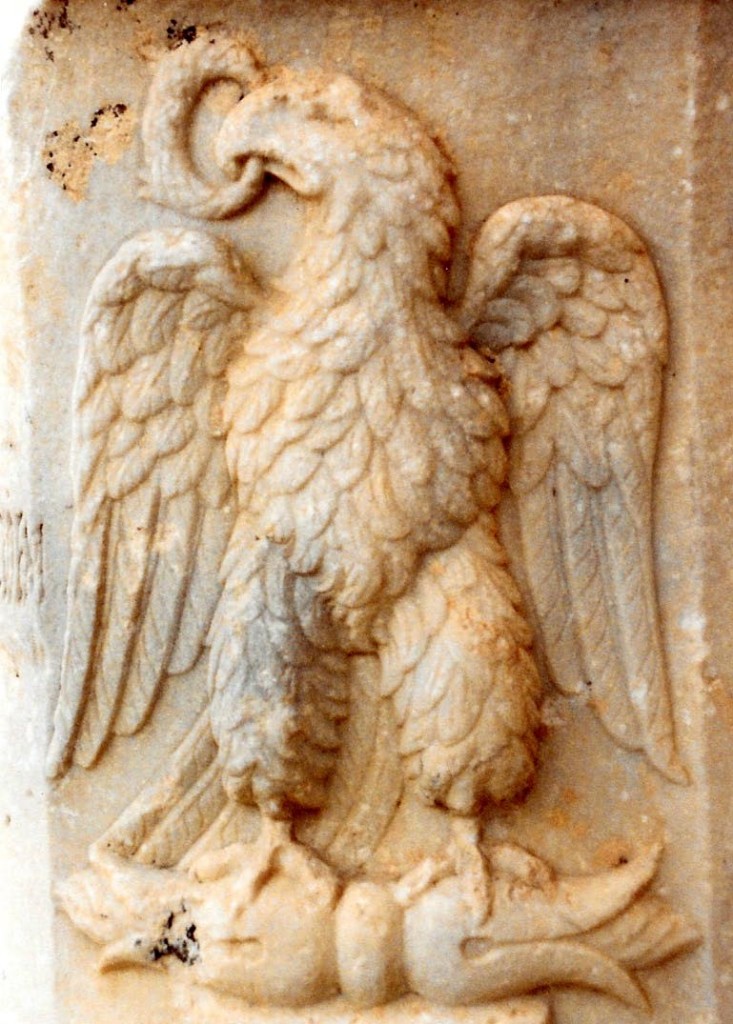 04.04.07.A. A RELIEF OF A ROMAN EAGLE.  The eagle shown carved in stone was the symbol of Roman power and wealth. The golden eagle that was hung on the temple gate was probably similar to this one. Photographed at the Rockefeller Museum by the author.

Finally, if the Bethlehem massacre is true, some critics have wondered why Josephus didn’t mention it. There are two possible answers.

[2]. Dayagi-Mendels,  Perfumes and Cosmetics in the Ancient World. 116.

[7]. Dayagi-Mendels, Perfumes and Cosmetics in the Ancient World. 116-19. Pilch, The Cultural Dictionary of the Bible. 28

[8]. Plutarch a/k/a Lucius Mestrius Plutarchus, (A.D. 45-120) was a Greek historian, essayist and biographer who is known for two books, Parallel Lives which included the Life of Alexander, and Moralia. His few surviving works appear to have been written in Koine Greek, the common Greek language of the first century.

[9]. Dayagi-Mendels, Perfumes and Cosmetics in the Ancient World. 116.

[12]. Dayagi-Mendels, Perfumes and Cosmetics in the Ancient World. 116.

[15]. Egypt was under direct rule of Rome since 30 B.C. and Queen Cleopatra VII was the ruling monarch. Herod the Great was under constant fear of her as she had considerable political influence in Rome that threatened him.

[17]. In 2007 a team of German archaeologists from the Dortmund Technical University located the ruins of a fortified palace they believe was built by Herod the Great. Herod’s fortress was probably built over another  fortress mentioned in Judges 8:17. The discoverey of Amathus was reported in the Dortmund Technical University News Release, (Dec. 13, 2007), and in Artifax, 23:1 (Winter, 2008). 13-14.

[21]. One of Herod’s sons, Herod Antipas, married a Nabataean princess to create peace.  But when Antipas divorced her, her father went to war against Antipas and soundly defeated him.