JESUS IS PRESENTED IN THE TEMPLE

22 And when the days of their purification according to the Law of Moses were finished, they brought Him up to Jerusalem to present Him to the Lord 23 (just as it is written in the law of the Lord: Every firstborn male will be dedicated to the Lord) 24 and to offer a sacrifice (according to what is stated in the law of the Lord: a pair of turtledoves or two young pigeons).

“Every firstborn male will be dedicated to the Lord.” In keeping with the Mosaic Law, Mary and Joseph dedicated Jesus to a lifetime of service to God. The obeyed a command that was as old as the dawn of Judaism.

Give Me the firstborn of your sons.

Their obedience follows the pattern of Hannah who brought Samuel to the Lord in 1 Samuel 1:24-28. The dedication service came forty-one days after the birth of the child (Lev. 12:1-6), calculated as follows:

At the time of the consecration, two doves or young pigeons[4] were offered at the temple,[5] more specifically, at the east gate of the Court of the Israelites, called Nicanor’s Gate.[6] This is a clear statement of Joseph’s financial condition: he was poor.  The offering also indicates that the generous gifts presented by the magi were received at a later time, otherwise, Mary and Joseph probably would have offered a bull (Lev. 12:2-6).

04.04.03.A. BOWL FRAGMENT WITH INSCRIBED “KORBAN” AND TWO BIRDS. In the 1960s Benjamin Maar excavated the ruins of some first century shops near the temple mount and found a bowl fragment with the inscribed word “Korban.” The word means sacrifice, and has two inscriptions of dead birds (shown upside-down). There is no question that the vessel was intended for a sacrificial offering at the temple.

The presentation was a ceremony that consisted of a burnt offering of two turtledoves (pigeons) and two prayerful benedictions.  The first blessing was for the law of redemption and the second for the gift of the firstborn son. The burnt offering was a sin offering, which was followed by thankfulness to God for the child and for the restoration of communion with Him. It was also a symbolic expression of the love and protection of God over each family in Israel. At the conclusion of the blessings, the required second offering (redemption payment) of five shekels (Num. 18:15-16) was made.[7]  This passage provides strong evidence that Mary and Joseph, though poor, were dedicated and faithful to their orthodox Jewish faith.  This biblical tradition is the origin of the modern Christian practice of infant dedication to our Lord before the congregation.

The five selas (shekels) due for the (firstborn) son should be paid in Tyrian coinage; the thirty due for the slave (that was gored by an ox)[8] and fifty due from the….

The mikvaoth (plural for mikvah) on the southern steps of the temple is believed to have been the most likely place where Mary took her ritual immersion, as was the custom.  The mikvaoth and the Pool of Siloam were the only two locations where there was sufficient water for the mass immersions (baptisms) of three thousand people after the Day of Pentecost. Ritual cleansings were extremely important in Judaism, as is reflected in the confrontations the religious leaders had with Jesus on this subject. It is also one of the six sections of the Babylonian Talmud that is dedicated to this subject. 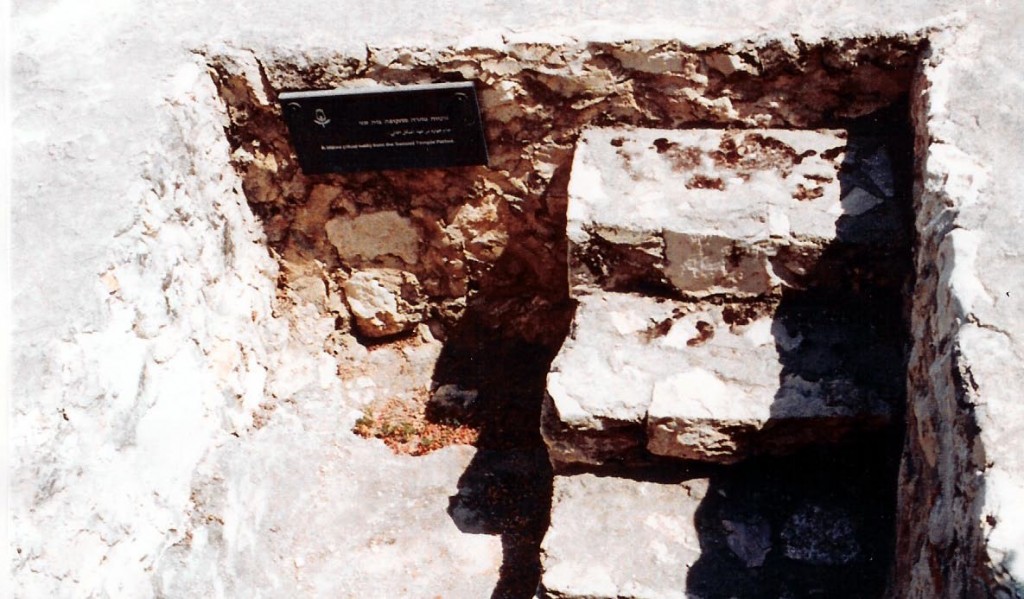 04.04.03.B. A MIKVAH. A mikvah is an immersion reservoir carved in stone. This is one of forty-eight mikvaoth (plural) located at the southern steps of the temple.  To become ritually clean prior to entering the temple, one would step down into the reservoir, be completely immersed, and then exit.  Photograph by the author.

The practice of immersion rituals in a mikvah was adapted from Numbers 31:21-23, where Moses said that metals had to be cleaned by immersion in water. The Pharisees, therefore, applied this principle to themselves. Every time one believed he became defiled, he had to immerse himself in the mikvah.  This may be the reason the Apostle Paul said that Gentiles needed only one baptism in Acts 2:38, Romans 6:3-5, and Ephesians 4:5. This is a clear example that Mary and Joseph, although not Pharisees, obeyed the teachings of the Pharisees. This does not mean they were Pharisees, but the vast majority of orthodox Jewish people lived by the teachings of this sect.  Furthermore, they controlled the synagogues of the land. While the Essenes and several other religious sects practiced the ritual, the Pharisees were the largest and most popular of the religious sects. However, the Sadducees disagreed and mocked the practice.[9] 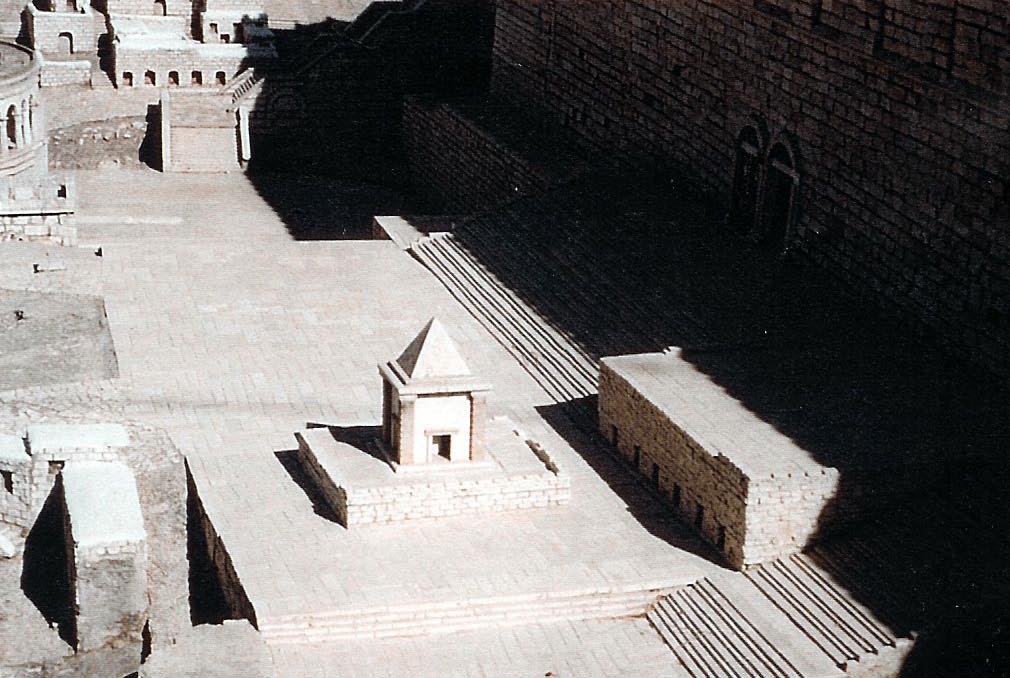 04.04.03.C. MODEL OF TEMPLE SOUTHERN STEPS. This is a model of the southern steps of the temple showing a platform area. On the south side of the platform are seven entrances that led to the mikvaoth beneath it.  Several were designated for men only, while others were reserved only for women. Men, who were professional water carriers kept these mikvaoth filled with “living water.”  Mary would have used one of these for her ritual bath of purification after the birth of Jesus. Photograph by the author. 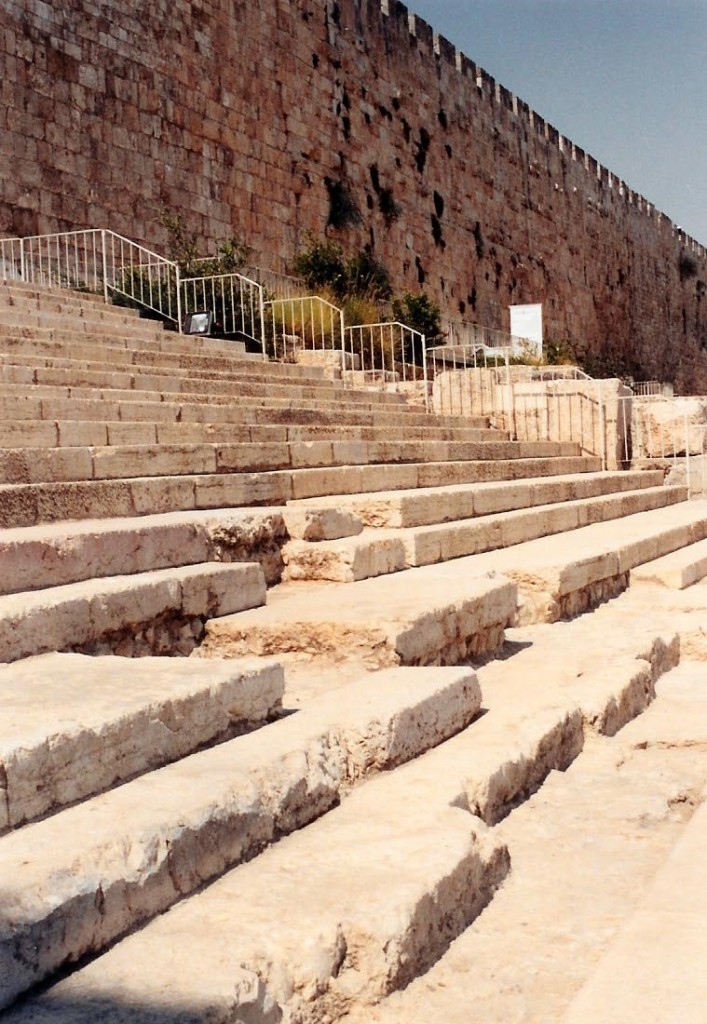 04.04.03.D. THE SOUTHERN STEPS AS SEEN TODAY. The steps are uniform with occasional different tread widths, causing the walker to notice and be careful in his or her ascent. This step pattern was purposeful so that those who come to worship do not do so out of habit. The mikvaoth are on the other side of the hand rail. Photograph by the author.

[2]. According to Leviticus 12:5, if a woman gave birth to a girl, she had to wait sixty-six days for her purification to be completed. No reason was given as to why the waiting time is longer when a girl is born than for the birth of a boy.

[6]. Lightfoot, A Commentary on the New Testament from the Talmud and Hebraica. 3:39; Jeremias, Jerusalem in the Time of Jesus. 164;  Geikie, The Life and Works of Christ. 1:128-30. This was the same gate where women suspected of adultery were examined.