8 In the same region, shepherds were staying out in the fields and keeping watch at night over their flock. 9 Then an angel of the Lord stood before them, and the glory of the Lord shone around them, and they were terrified. 10 But the angel said to them, “Don’t be afraid, for look, I proclaim to you good news of great joy that will be for all the people: 11 Today a Savior, who is Messiah the Lord, was born for you in the city of David. 12 This will be the sign for you: You will find a baby wrapped snugly in cloth and lying in a feeding trough.”

13 Suddenly there was a multitude of the heavenly host with the angel, praising God and saying:

14 Glory to God in the highest heaven,
and peace on earth to people He favors!

Shepherding was not an occupation on the bottom of the social ladder, but it was a lowly one. Since it was a 7-day a week job, shepherds could not observe all of the Mosaic commandments. But according to the Oral Law, it was above the three occupations for which a wife could divorce her husband – dung collector, leather tanner, and copper smelter.[1] It was above the occupation of tax collectors who were often condemned by the rabbis. But shepherding was close to camel drivers.[2] A family said it was cursed if a son decided to enter this form of livelihood.

However, since Bethlehem was a holding area for sheep to be sacrificed at the temple, the rabbis elevated the status of those shepherds. They were known as the Sanctified Shepherds of the Seed of Jacob.[3] They had to care for the sheep and herd them from Bethlehem to the temple. The grazing fields were also “sanctified.” The shepherds and their families also had to live according to strict rabbinic rules and regulations.[4]  It was an honor to be a shepherd of the sacrificial sheep, in spite of the degrading occupation.

Jesus, God’s sacrifice for humanity, was born where sheep were raised for sacrifice in the temple. Just as angels guarded the Christ child, [5]  it was the shepherds who had guarded the sheep and who were the first to be invited to see the Messiah. For centuries, sheep were raised on these hills that would eventually sacrificially die for the sins of their shepherds (Ex. 12:1-13); now a shepherd was born here who would die for the sins of His sheep (Jn. 10:11).

“Shepherds were staying out in the fields.” They had to protect their sheep from lions, bears, and of course, the ever present thieves. At times sheep were permitted to graze out in the fields at night when it was cool and comfortable. While some of these unknown shepherds[6] would be guarding them, another one would be in the watch tower scanning the hills for any signs of encroaching danger.[7] As guardians of the flat-tailed sheep, they became known as “small cattle breeders.”[8] The word flock in Greek is son (6629) meaning small cattle,[9] which is why sheep are sometimes referred to as small cattle.[10]  Large cattle, of course, consisted of donkeys, cows and larger animals.[11]  Small cattle were raised on the nearby Judean hills and when mature, were herded to Bethlehem to be sacrificed.[12]

8 And you, watchtower for the flock,
fortified hill of Daughter Zion,

9 Now, why are you shouting loudly?
Is there no king with you?

Has your counselor perished
so that anguish grips you like a woman in labor?

Concerning this passage, near the tower was the village of Bethlehem that Micah said would be the place where the Kingdom of God would enter the earth.  The term “Daughter of Zion” or “Daughter Zion” is a reference to a small village near a major city; Bethlehem was the “daughter city” of Jerusalem.  The watchtower for the flock served two purposes.

There was a constant movement of “small cattle,” as two lambs were sacrificed daily in morning and evening,[16] and thousands more at Passover.[17] The description of keeping sacrificial sheep at Bethlehem was preserved in the Mishnah.  Note that while sheep and goats are sometimes called “small cattle,” in the Mishnah they are referred to only as “cattle.”

Migdal Eder evidently has a long history – all the way back to the book of Genesis.

19 So Rachel died and was buried on the way to Ephrath (that is, Bethlehem). 20 Over her tomb Jacob set up a pillar, and to this day that pillar marks Rachel’s tomb. 21 Israel moved on again and pitched his tent beyond Migdal Eder.

Therefore, the tower of the flocks must have been nearly two thousand years old by the time Jesus was born. Considering it’s the close proximity to Bethlehem, one scholar has suggested that Jesus may have been born close to the shepherd’s fields.[22] If so, that is not only symbolic of Jesus being the Lamb of God, but also may have reflective implications to the Abrahamic Covenant.

This phrase, “The shepherds were staying out in the fields,” has been used as a proof-text to claim that Jesus was not born on December 25, because shepherds would not have been out in the cold nights.  However, the climate proves this interpretation wrong. Bethlehem lies on the edge of a semi-arid region where there is very little rain. The little that does come arrives between November and late April. By September the grassy fields are burned dry by the sun.  Then the autumn rains come and by December the fields are lush and green.

The Mishnah accounts appear to differ on the length of time throughout the year that flocks stayed outside. This might be because Israel has five distinct climate zones. The Babylonian Talmud suggests that the flocks stayed outside throughout the year (in Israel, not in Babylon).[23]  Furthermore, sheep and goats have been known to lay outside with a coating of ice on their thick fur and with no regard to winter weather.

“The glory of the Lord shone” This was the Shekinah Glory of God,[24]  that departed from the temple shortly before the Babylonians destroyed it in 587/6 B.C. (Ezek. 8-11). It had not been seen for nearly 580 years, and then it came to these shepherds.  The word Shekinah or Shechinah means that which dwells.[25] The Glory of God frightened the shepherds, which was why the angels told them not to be fearful. The Glory did not come to the religious elite, but to the “Sanctified Shepherds of the Seed of Jacob.”

The Shekinah Glory of God is also mentioned in the New Testament relative to the martyrdom of Stephen (Acts 7:55), the light that surrounds Jesus at His second coming (2 Thess. 1:9), and the radiant splendor of the New Jerusalem (Rev. 21:11, 23).  Josephus said that when Solomon’s temple was completed, the glory of God was so dense that one priest could not see another.[26] 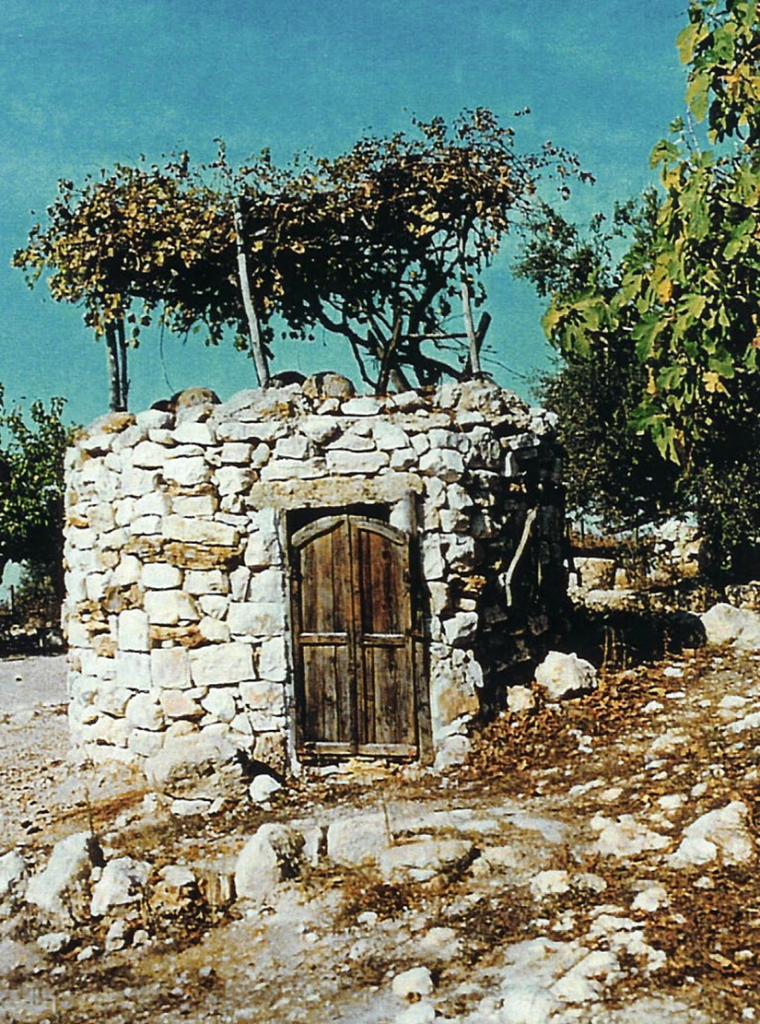 04.03.11.A. AN ANCIENT WATCHTOWER. This watchtower in Samaria, more than a thousand years old, is typical of those of the biblical era. There was just enough room inside for two or three people to sleep while others were on the observation deck.  Photograph by the author.

“But the angel said to them.” There was a single angel (verses 9, 10) who spoke to the shepherds. Later the term “heavenly hosts,” meaning angels, is mentioned in verse 13. But notice that they spoke, they did not sing.  It is also a point of interest that all the angels mentioned in Scripture are male.  Modern artists have often depicted angels as lovely female figures or small child-like figures with lovely feathers and no clothes that not at all descriptive of biblical angels. Rather, biblical angels are large and the word fire or judgement is often associated with them. But in this case, it was the good news of Jesus that they spoke of. Whether angels sing or to what gender they are referred to is hardly important.  However, this passage highlights how often preconceived ideas distort the reader to the truth.

“Great joy.” Since the birth of Jesus occurred during the Feast of Tabernacles,[27] this phrase was an appropriate play on words.  This Feast commemorated God living among men and was a time of great joy for everyone. Hence, the words of the angel were in due season.

“And on earth peace to people He favors.”  The peace Luke spoke of was not in the political context, but rather, a peace of the heart. This peace is also conditional; it is to “whom His favor rests” or “people with whom He is pleased.”[28] An alternate reading is “Peace among men of His good pleasure.” [29] Men and women do not earn God’s peace, but He gives it to them because He is pleased to do so.  The phrase is a technical term for the elect of Israel as noted in the Dead Sea Scrolls[30] and is found also benediction 17 of the Eighteen Benedictions.[31]  The favor of God rests only upon those who accept “Jesus’ peace” or the “peace of the Messiah.”

[2]. For further study on the despised trades, see Jeremias, Jerusalem in the Time of Jesus. Chapter 14.

[6]. Scripture has not preserved their names, but if the Syrian Book of the Bee is true, their names were Asher, Zebulun, Justus, Nicodemus, Josephus, Barshabba, and Jose. See Jordan. Who’s Who in the Bible. 239.

[7]. Sometimes the word for an agricultural “tower” or “watchtower” is translated as “booth,” “shack,” or “shelter,” as in Isaiah 1:8. Lightfoot, A Commentary on the New Testament from the Talmud and Hebraica. 1:235-38.

[10]. Lightfoot, A Commentary on the New Testament from the Talmud and Hebraica.  1:212; Pilch, The Cultural Dictionary of the Bible. 137; Safrai, “The Jewish Cultural Nature of Galilee in the Frist Century.” 169.

[14]. An article by Charles R. Condor in the Quarterly Report of the Palestinian Exploration Fund Report dated April, 1875, said that “Migdol Eder”, also known as “the Tower of the Flock” is about a thousand paces from Bethlehem. Furthermore, it is located at the ruins of the Monastery of the Holy Shepherds; See also Vincent, Word Studies in the New Testament. 1:269.

[16]. See Appendix 16 for clarification on the two daily evenings.

[19]. Insert by the author; Migdal Eder was an area adjacent to Bethlehem.