Herod’s Hellenistic lifestyle so greatly offended the Jews, that scholars have concluded that he reconstructed the temple, (see 03.05.31.B) and built the Machpelah,[1]  the tomb for Abraham and the patriarchs (see below), to appease them. So Herod took it upon himself to remodel the simple and modest Jewish temple that had stood for five centuries. Zerubbabel built it when the Jews returned from Babylon in 515 BC.  Since the Jews had a great disdain for Herod, the tyrant needed to attain their favor, so he met with them, and together planned a massive remodeling project. Josephus said that his greatest architectural accomplishment was the expansion of the sacred temple.[2] His plan was to build a lavish structure that would surpass the famous Solomon’s temple.   In fact, it was so massive and significant that some scholars refer to it as the “third temple,” even though Zerubbabel’s structure remained intact throughout the reconstruction period.[3]  His dream to build one of the great wonders of the world was completed decades after his death, in A.D. 63, but only seven years before its destruction.

According to Josephus, when Herod announced his plans to enlarge the temple, the people feared he would destroy the existing temple, however, after Herod and the religious leaders assured them it would not be destroyed, Herod obtained,

A thousand wagons that were to bring stones for the building, and chose ten thousand of the most skillful workmen, and bought a thousand sacerdotal garments for as many of the [Levitical] priests, and had some of them taught the arts of stone cutters, and others of carpenters, and then began to build. 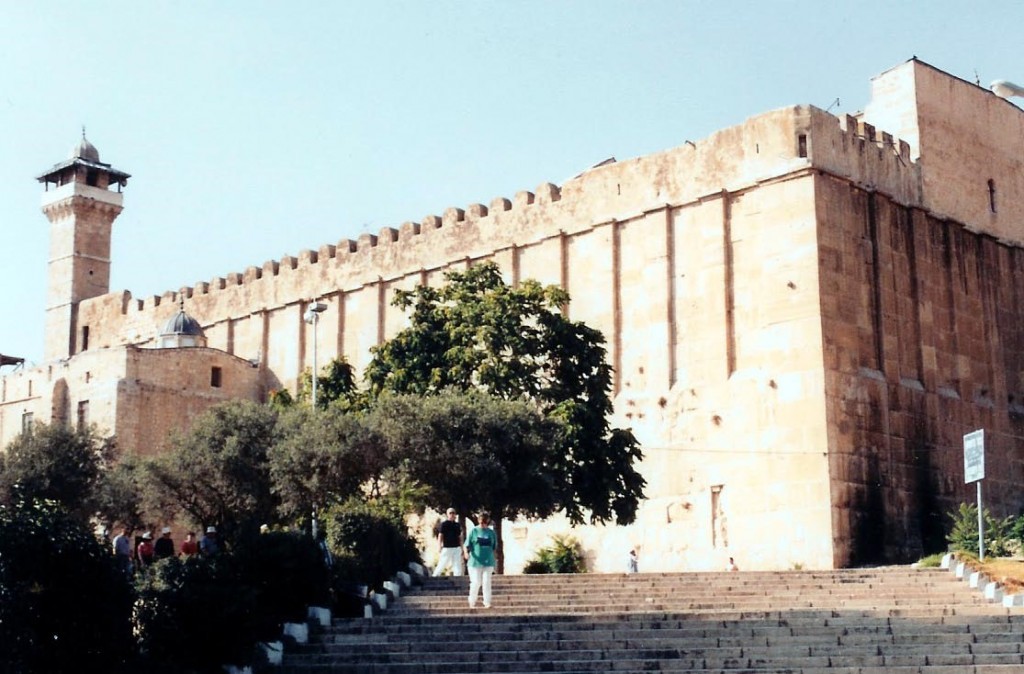 03.05.31.A. THE MACHPELAH. Herod built this massive building as a tomb for Abraham in Hebron. It is an excellent example of Herodian construction and design.  The exterior is believed to be similar to that of the exterior of the temple at the time of Christ. Courses of stone are identical to the Herodian wall in Jerusalem with some blocks measuring as long as 20 feet.[4]  The Muslims, however, increased the height of the walls, added the minaret, and transformed the edifice into a mosque, now known as the “El-Haram el-Ibrahimi.” Photograph by the author.

His architectural achievements on behalf of the Jews were not because he was a religious person, far from it.  As previously stated, Herod knew that he repeatedly offended his Jewish subjects, but valued religion as a means of influence, manipulation and control. The lavish temple was to appease them and, like so many of his other building projects, impress Rome. In fact, his goal was to make Jerusalem the “Rome or Athens of the east.” [5]  It is at this point that scholars debate whether he tried to appease the Jews, or simply desired to impress Rome – most believe it was the latter.  The construction lasted eighty years, more than sixty after his death. When it was finally completed, so many highly trained skilled craftsmen – eighteen thousand – were out of employment that the nation suffered an economic recession.[6]

03.05.31.V The Temple: Yesterday and Today Professor Gary Byers discusses the expansion of Herod’s temple of the first century and Dr. Paul Wright discusses the Temple Mount as it is today. But first, an introduction by Dr. Bill Heinrich.

03.05.31.B. A MODEL OF HEROD’S TEMPLE. Herod the Great began reconstructing the temple in 20-19 B.C., and while most of the work was completed within 15 years, the ornamental work was finally completed in A.D. 63 – more than eighty years later. It required thousands of skilled workers and slaves. During that time, the religious worship and temple rituals continued without interruption. Photo by the author.

[1]. The Machpelah is huge building, is exceedingly larger than any other massive tomb, and may have been referred to by Jesus as a “monument” in Luke 11:48. However, other scholars have suggested Luke 11:48 may be a reference to the tomb of Zechariah (see 09.02.02.A).

[5]. Mellowes and Cran, Producers. From Jesus to Christ: The First Christians. (DVD). Part 1.