Alexander Jannaeus continued the policies of his father, Aristobulus I, but with greater intensity. With his army, that included foreign mercenaries, he successfully took control of northern cities and villages, including Mount Tabor.[1] He then traveled east and conquered the Decapolis cities, a conquest his father dreamed of.[2] Like his father, he had no mercy on the Gentiles living in Galilee as he told them either to accept Judaism or leave. The fact that he now ruled over most of the territory that was once part of David’s Empire, greatly increased the speculation that the anointed “son of David” would soon come to re-establish the great Davidic Empire. Everyone believed that when the “anointed one” would come, he would restore order and justice in the land. (The terms “anointed one” and “he” are not capitalized because the people were not expecting God Himself to come.) By the time Jesus arrived more than a century later, many had become tired of waiting.

He minted coins with his inscription as king and placed himself in the position of a high priest even though he was not of the Davidic line.[3]   This angered orthodox Jews such as the Essenes, who had previously separated themselves from the temple. They wrote of the corrupted priesthood in what is now known as the Dead Sea Scrolls.

Jannaeus could have brought unity between the Pharisees and Sadducees. But it is evident that he and other leaders were continually spiteful toward those who held a different religious viewpoint. On one occasion during the Feast of Tabernacles, when water was brought up from the Pool of Siloam to the temple, he poured the water on the floor beside the altar instead upon it. Instantly the attending priests, Pharisees, and others around him began to throw citrons (a fruit used in the feast celebrations) at him. In response, Jannaeus called in his soldiers and several thousand worshippers were massacred that day. While this event took place more than a century earlier, the Pharisees did not forget this or any other events of persecution by the Sadducees at the time of Jesus.[4] The intense hatred and animosity between Pharisees and Sadducees grew stronger every day.

With various areas under his domain, his international trade expanded and the nation’s economy grew. It was truly a time of prosperity seldom seen since the days of King David and Solomon. Now the Greeks of the Decapolis cities were paying taxes (tribute) to the Jews. While there was stability on the international scene, on the home-front there continued intense conflict between the Pharisees and Sadducees. In fact, as a faithful Sadducee, his reign was marked by the bitterest persecution of the Pharisees.

Just as John Hyrcanus I accepted elements of Hellenism, Jannaeus did likewise. In fact, in the years that followed the Maccabean Revolt, the entire Hasmonean/Maccabean dynasty became increasingly accepting of Hellenism and less interested in observing either the biblical or rabbinic Judaism. By the time Jesus was in ministry, the dynasty – then known as the Sadducees – was entirely Hellenistic and gave only lip service to the Torah.

03.05.09.A. A MODEL OF A HASMONEAN MERCHANT SHIP.   This model of a Hasmonean merchant ship was constructed from a tomb drawing in Jerusalem. It demonstrates the economic and military power of the Jewish Hasmonean dynasty in the first and second centuries B.C.  Photographed by the author in 2000 at the Dagon Grain Museum, Haifa.

The Maccabean leader Alexander Jannaeus (Yehonatan) evidently wanted to modernize his country. He not only minted coins with the Aramaic (as is used today) square script, and also dated them.  Previous Jewish coins had the older paleo-Hebrew script – the script used before the Babylonian destruction of Solomon’s temple in 586 B.C.[5] His coins were minted throughout his reign, 103-76 B.C.[6] 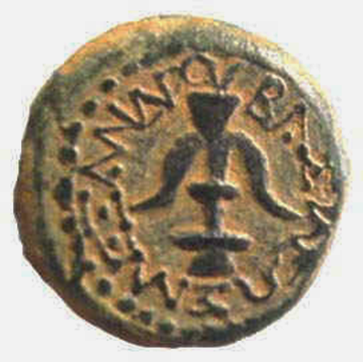 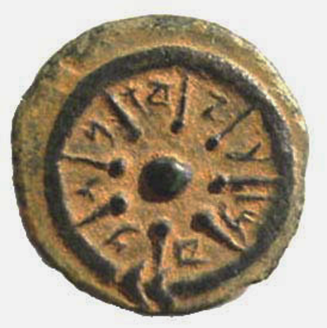 03.05.09.B.  THE FIRST BILINGUAL JEWISH COIN. This coin with Greek and paleo-Hebrew lettering was struck by Alexander Jannaeus (Yehonatan) in the 25th year of his reign, corresponding to 78 B.C. LEFT: A ship’s anchor (of King Alexander) in Greek. RIGHT: A star of eight rays (Yehonatan the King) in Hebrew, stylized diadem around.[7]