Simon Maccabee was the first of a series of Hasmonean rulers who controlled the leadership and he reigned for eight years (143-135 B.C.). The revolt officially ended in May 142 B.C., but true independence was yet to be attained. He cleaned up pockets of resistance and, while the Jews were no longer fighting major military battles and had complete religious freedom, they were required to pay taxes to the Seleucids in Damascus, Syria. The latter part of his monarchy was a time of welcomed peace and prosperity.

All sides became tired and exhausted of the fighting. Syria still controlled some of the Jewish areas, but with Antiochus IV Epiphanes gone life had improved drastically. The last years of Simon’s reign were the most prosperous and peaceful after many years of war and hardships. In recognition of the achievements and Simon and his brothers, the nation declared Simon to be the hereditary high priest and ruler of Judaea. The people gave him the honored title of “Simon the Just” (1 Macc. 14:41). Simon was made “prince” as well as high priest until a time that a faithful priest would arise. In essence, he filled the position of high priest merely so it would not be vacant.[1] The future looked bright and promising, but that was about to change.

Then Simon and his family were invited to a banquet in Jericho that was offered by his son-in-law Ptolemy. Ptolemy used the occasion to assassinate the entire family. John Hyrcanus, the third son of Simon, heard of the plot, and barely escaped with his life. It had become evident that life under Jewish monarchy would be little different than under the pagans.  The promise of peace was gone.

The major accomplishment of the Maccabean Revolt was that,

It must be noted that the revolt…

they desired religious freedom as well as the pleasures of the Greeks. This is evidenced by the fact that Hasmonean leaders struck Greek coins, assumed Greek names, and were not even interested in purging the Greek gods and culture from Jewish society.

While the numbers of this immigration was rather small, some scholars believe that among them were the ancestors of Joseph and Mary. Some scholars believe that the descendants of the Davidic clan lived first in Kochaba (Batanea) and then relocated to Nazareth.[4] After the destruction of the temple and Jerusalem, one of the twenty-four courses[5] settled in Nazareth. For these Jewish refugees to have considered relocating there, the village must have had a reputation for being an all-Jewish conservative community. It eventually died out in the fourth century A.D.[6]

The invasion of Hellenism into the Jewish culture made profound changes in the religious landscape. If the Greeks had not come, religious groups such as the Sadducees, Pharisees, and the Essenes would never have developed. The intense bitter hostilities between these religious rivals continued throughout the days of Jesus. 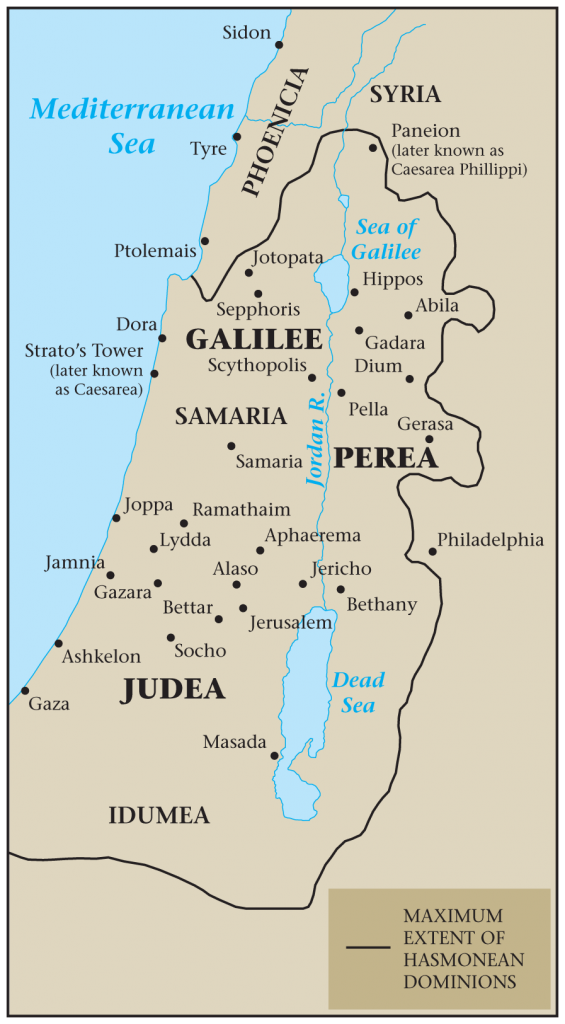 03.05.05.Z MAP OF THE HOLY LAND UNDER HASMONEAN DOMINATION (2ND CENTURY B.C.). This map shows that the Hasmoneans expanded their territory into Gentile areas. It also identifies Modin, located between Jerusalem and Joppa (Jaffa) that was the home of the Maccabean family that initiated the Maccabean Revolt.  Courtesy of International Mapping and Dan Przywara.

[2]. Meyers and Strange, Archaeology, the Rabbis and Early Christianity. 57.

[4]. Eusebius, Ecclesiastical History. 1.7.14; Pixner, With Jesus through Galilee. 125. Some scholars believe that Nazareth did not become a significant community until after the Maccabean Revolt, even though some archaeological evidence (pottery pieces) uncovered there has been dated to the Iron Age.  For further study, see the website for Associates for Biblical Research, as well as Grisanti, “Recent Archaeological Discoveries that Lend Credence to the Historicity of the Scriptures.” 475-98.

[6]. Meyers and Strange, Archaeology, the Rabbis and Early Christianity. 57.