The Maccabean Revolt began with a quest for religious freedom, but in the course of time, the Jews pursued only political freedom. The precise date when Jewish sovereignty began is difficult to determine as it varied from area to area. There was a dramatic improvement that began in 164 B.C. when Jerusalem and the temple came under complete Jewish control.  But they were not completely free from foreign control in all areas of Israel for another two decades.[1] This was the beginning of the Second Jewish Commonwealth[2] when Israel had complete political and religious freedom.

Although there were pockets of Syrian resistance, generally there was freedom from oppression and the people quickly began to prosper. Taxes were paid by goods that entered into the land by shipping as well as international camel caravans. In fact, the Jewish merchant marine sailed to nearly every port that belted the Mediterranean Sea.[3] Little wonder then, that years later, Herod the Great, who was known world-wide for his architectural wonders, built a three-story ship so he and his friends could sail to Rome.[4]

However, as the common people would soon discover, their leaders were nearly as corrupt as those who had previously been their overlords. Jews crucified Jews.[5] Capital punishment in Jewish history was supposed to be quick and without unnecessary agony. But instead, murder, theft, and the abuse by the religious authority are only some of the vices that permeated the leadership.  Righteous men and women were horrified to see widespread “unJewish” behavior by their own. They earnestly prayed for their long-awaited messiah to come.

Yet with the news of Jewish freedom spreading throughout the Diaspora, many foreign Jews, such as those in Babylon, decided to return to their Promised Land. Most settled in Galilee, a region that was severely devastated centuries earlier by the Assyrians.  While there were a few Gentile inhabitants, for the most part it was barren and became known as “Galilee of the Gentiles” (who destroyed it).[6] In fact, to confirm the absence of Gentiles living in this area, it is significant that archaeologists have uncovered numerous villages that had no evidence of pig bones – a sure sign of Jewish occupation.[7] Pig bones are always found in the ruins of Gentile communities. Now thousands were migrating into the region of rich farmland.[8]  So many  came in the second century that Josephus said that a “countless multitude” came from Galilee and other areas to Jerusalem at Pentecost,[9]  and that they did so by going through Samaria.[10] A growing number of scholars believe that in spite of the political, military, and economic crises in “Eretz Israel” (the land of Israel), the Jewish people maintained a majority over Gentile and Samaritan populations in the first centuries B.C. and A.D.[11]

Yet while the little Jewish state was trying to re-establish itself, it was sandwiched as the frontier of two opposing super powers: the Romans and Parthians. To the west, the Roman Empire was expanding quickly by belting the Mediterranean Sea and spreading into Europe.  To the East, the Parthian Empire was growing to include large portions of India and surrounding areas.  The little Jewish enclave was where the two would meet – on the land bridge that connects three continents.  As if the influences of the Greek culture had not challenged the Jews enough, now they were the subject of two competing tug-of-war empires.

The significance of this era is that the Maccabean family established itself as the governing dynasty, and would continue to dominate the Jewish people until the Roman conquest in 63 B.C. Shortly after that conquest, Herod the Great was appointed by Rome to be king of the Jews. His success was due, in part, to his marriage with Mariamne, a Hasmonean (Maccabean) princess (see the House of the Maccabees Family Tree below). 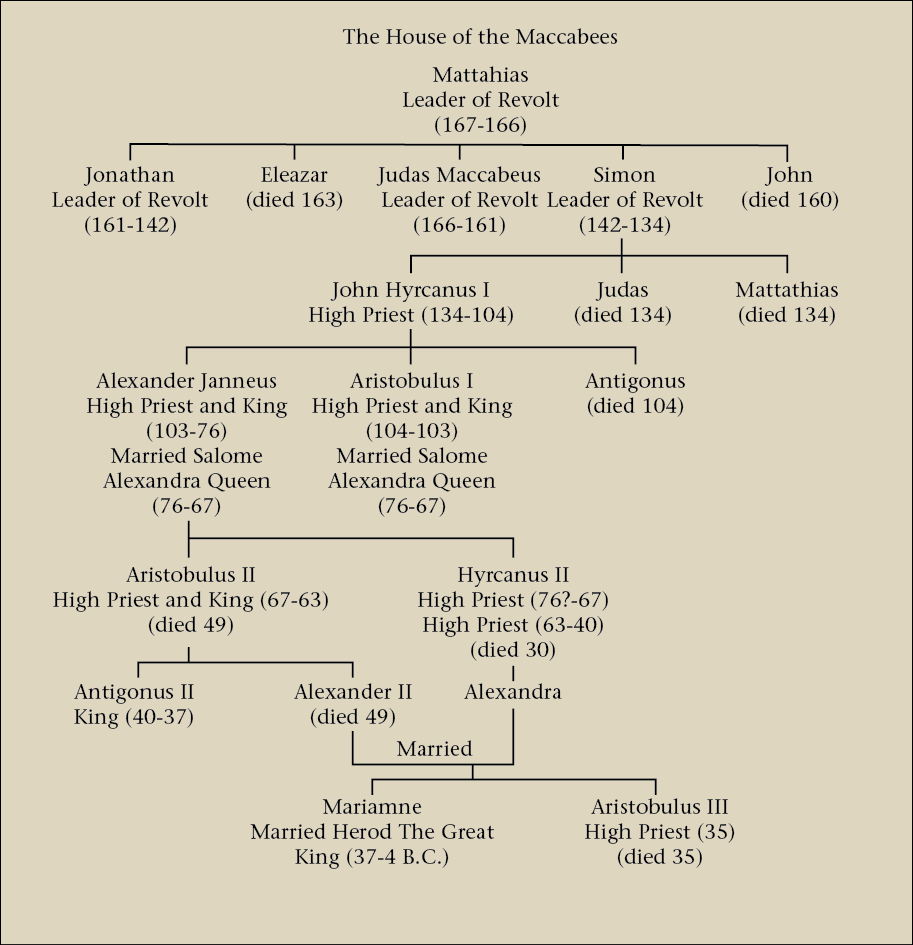 03.05.02.A THE HOUSE OF THE MACCABEES FAMILY TREE. The Maccabean Dynasty, also known as the House of the Maccabees, this family dynasty was instrumental in the successful Maccabean Revolt and their descendants eventually became known as the Sadducees. Courtesy of International Mapping and Dan Przywara.

Graffiti illustrations of sea-going vessels were found in a Jerusalem tomb dated to the Maccabean period of the second century B.C.[12] The tomb, known as Jason’s Tomb, belonged to a Jason, that the inscriptions indicate sailed to the coast of Egypt. He may have been a naval commander although some historians believe he was the high priest who was removed from office in 175 B.C. (but that does not explain the ship illustrations). The graffiti emphasizes the merchant marine and naval power of the time

03.05.02.B. GRAFFITI OF MACCABEAN ERA SHIPS UNDER SIEGE. Graffiti of a pirate ship pursuing two other vessels was found in Jason’s Tomb in Jerusalem.  In the tomb, the pirate ship (bottom) is to the right of the other ships depicting a chase. The illustration is based upon charcoal drawings found in the tomb.

[3]. In the maritime commerce of ancient Middle East, Israel is referred to as either a land bridge to be crossed by a military conqueror, or a people group. Various empires dominated the Mediterranean Sea, but the Israelites were never among them. But in the second century B.C., the superior maritime activities of the Jews are found in various extra-biblical sources such as 1 Macc. 8:23-28; 13:25-29.  See also Hachlili, Jewish Funerary Customs, Practices and Rites in the Second Temple Period. 148-50 concerning the graffiti of ships found in tombs.

[5]. In the first half of the second century B.C., one of the most shocking crucifixions occurred when the wicked priest Alcimus reportedly had his uncle, the righteous Jose ben Joezer, crucified. The people were shocked in disbelief of this horrendous act. See Genesis Rabbah 65:22 (Albeck, ed., p. 742); Midrash on Psalms 11:7; cf. 1 Macc. 7:16.

[11]. Cohen, “The Attitude to the Gentile in the Halakhah and in Reality in the Tannaitic Period.” 35.