03.04.05 Alexander the Great and the Hellenistic Period

Young Alexander took control of Greece upon his father’s assassination and two years later began a massive military campaign against King Darius of the Persian Empire. He developed a well-trained army with 140 to 160 war elephants that he used in five battles. Consequently, in only ten years, he had control of a vast empire and became the fulfillment of one of Daniel’s prophecies (11:3).  He gave the Jews first class citizenship and encouraged them to move to his new city of Alexandria in Egypt.  Many did and eventually the city became the largest Jewish metropolitan area of the ancient world.  In fact, he encouraged the Jews to move to all of his Greek cities where they enjoyed religious freedom.

Alexander was a student of Aristotle, a scholar of scholars, and had his own ambitious ideas for the world.  His goal was to civilize the nations of the world with Greek. He would accomplish this by the introduction of Greek philosophy and select the best qualities of the captured nations to give to all the peoples of his empire. An important contribution was his effort to make Greek the lingua franca or the official language of business and government throughout the empire. It was accepted everywhere except in the Jewish enclave of Judaea. With this new philosophy known as Hellenism, came the concept that would challenge the Jews – that man and not God, was central to life.[1] 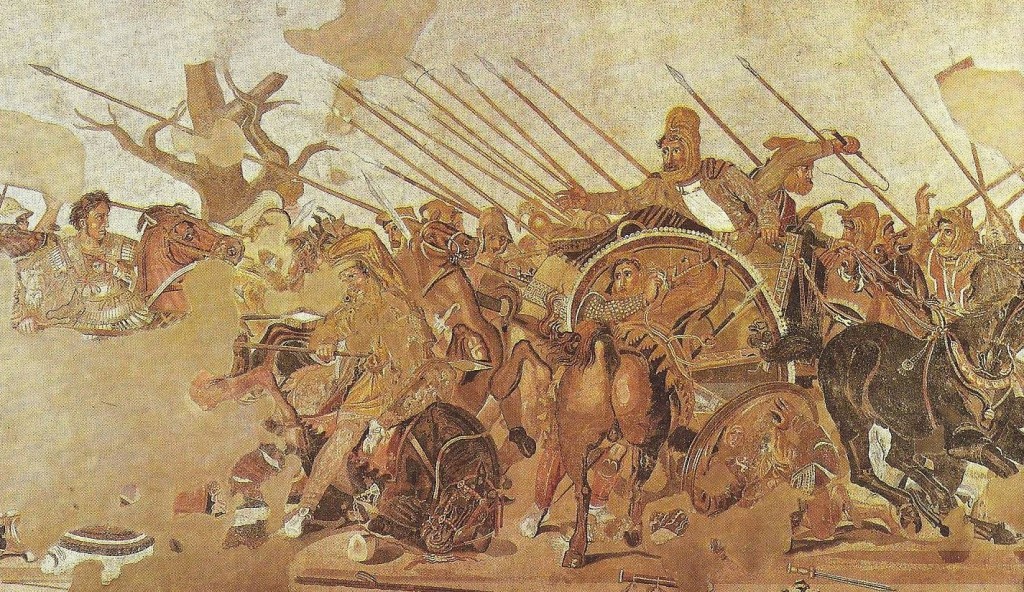 03.04.05.A. A MOSAIC OF ALEXANDER THE GREAT vs. THE INVINCIBLE KING DARIUS III. In one of the most significant battles in the ancient world, the young Alexander (shown on left side) with a lance defeating the seemingly invincible King Darius III in 333 B.C., who is shown terrified in his chariot.