02.02.03 Apocrypha. The Apocrypha[1] is a collection of about fourteen books[2] written, for the most part, during the Inter-Testamental Period in the Holy Land.[3]  However, It was the intent of the authors to write a message to an inner circle of the faithful, which could not be understood by outsiders. Hence the Greek name apokryphos, meaning “hidden” or “concealed.”[4]  The Roman Catholic[5] and Eastern Orthodox Churches have accepted them as inspired Scriptures.[6]  Protestants, however, recognized these books only for the historical values, as they believe these add nothing of theological value to the canonical Scripture.[7] They enhance the understanding of the Greco-Roman-Jewish atmosphere and are a witness to the faith of the Jewish people living in the second century B.C. Hence, these provide essential historical background for understanding the Judaism of Jesus’ day and the Jewish matrix of early Christianity.[8]  Each book must be evaluated for its worth and intended use in a particular study. For example, the book of Judith is essentially a book of fables common in the days of Jesus, whereas 1 and 2 Maccabees are both well-written, highly respected contemporaneous historical accounts of the second century B.C.

Apocalyptic literature appears in both the Apocrypha and Pseudepigrapha.  The very nature of the word “apocalyptic” has the meaning of pending divine judgment and an end of the world.[9]  These authors were convinced of the following:

Two biblical books that are outstanding examples of apocalyptic literature are Daniel and the Revelation.[11]  Like the Pseudepigrapha (described below), some Apocrypha books were written in part to justify portions of Scripture that were embarrassing to the Jews. Since they had elevated their patriarchs to near deity level, they could not accept the fact that they were men who had sinned and were extended forgiveness by the grace of God. This is evidence of the theological chaos that existed in the first centuries B.C. and A.D.  Jerome made this comment about these books in his Letter to Laeta.

They are not written by those to whom they were ascribed … many faulty elements have been introduced into them, and  …  it requires infinite discretion to look for gold in the midst of dirt.

A number of older Bible manuscripts, such as the Sinaitic, Vatican, and Alexandrian contain the Apocrypha. The oldest Syriac version does not have it but newer ones do.[12]  It was first printed in the English language in 1535 as part of the Coverdale Bible where it was placed between the Old and New Testaments. It was often a part of the Protestant Bible, but solely for its historical value until 1827.[13]  By the end of the 1800s, all Protestant Bibles eliminated the Apocrypha while the Roman Catholic and Eastern Orthodox Bibles continue to include it.

Two of the books within the Apocrypha category are 1 and 2 Maccabees. Some scholars have questioned the reliability of these works, until the Heliodorus Stele was discovered. The inscribed stone preserves part of a letter of King Seleucus IV Philopator (218-175 B.C.) that was written to a Seleucid official, Heliodorus, who is believed to have been the assassin of the king. The account provides the historical context for the royal official Heliodorus named in the miraculous story in 2 Maccabees, chapter 3. The communication was engraved in the stone stele for public display.  In it the king discusses the proper care of temples in his domain, specifically Coele-Syria and Phoenicia, which included Judaea.[14] The king’s proclamation represents the beginning of royal policy of religious exploitation and interference that would lead to the Maccabean Revolt a decade later. 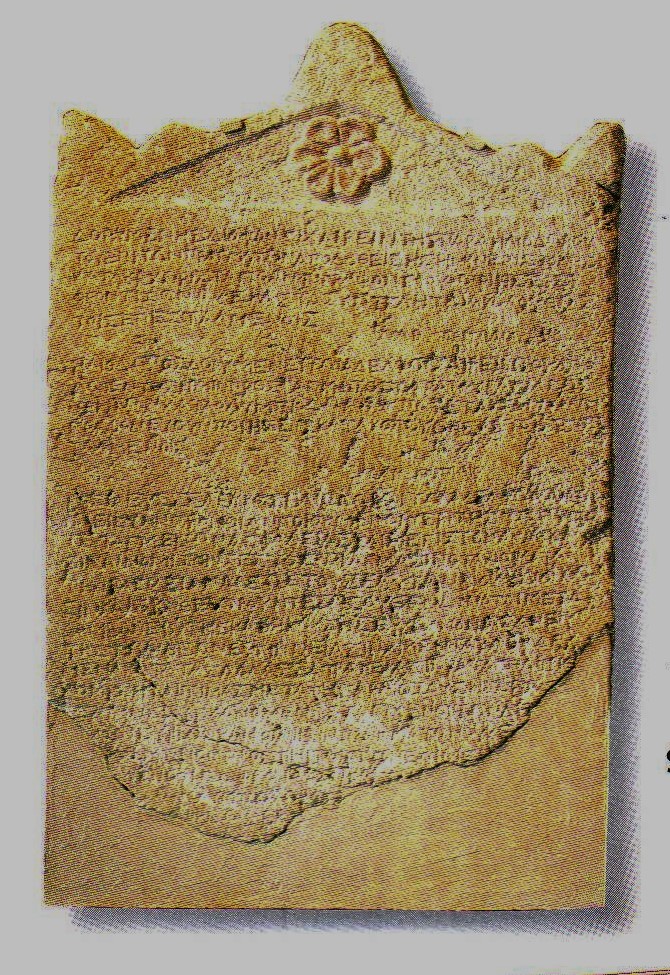 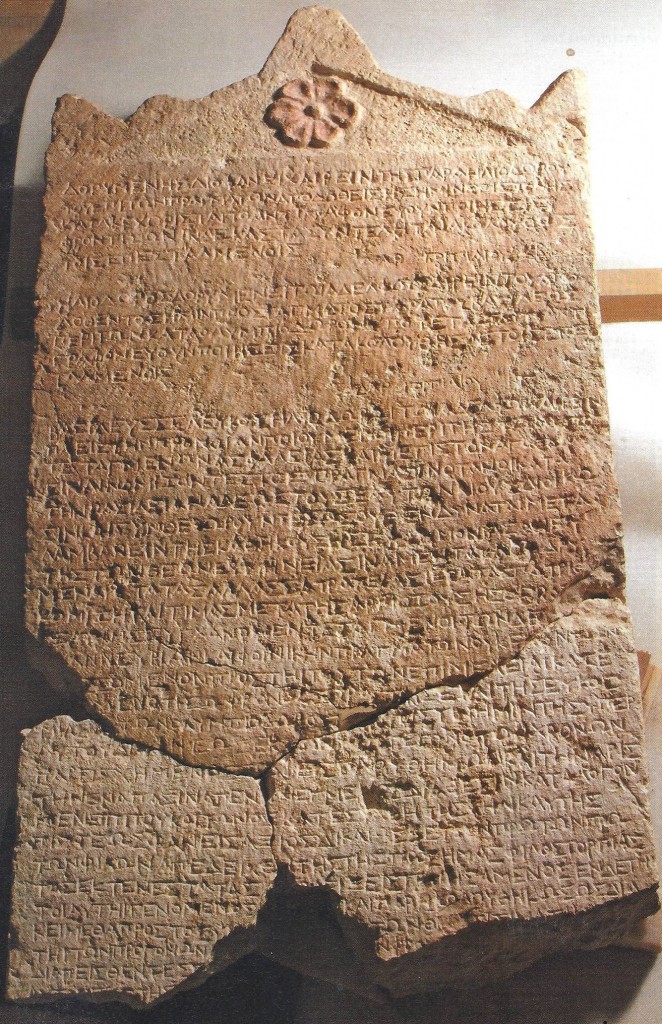 02.02.03.A. THE HELIODORUS STELE.  LEFT: This stele, dated to 178 B.C., is shown with the missing portions in place, and RIGHT: the portions discovered in 2005 and 2006. It illustrates the background of 2 Maccabees and demonstrates that the book is an authentic and independent information source on this historical period. The inscription marks the beginning of the Greek-Seleucid intervention of Jewish life that eventually led to the Maccabean Revolt in 167 B.C. Heliodorus was ordered by King Seleucus IV (reigned 189-175 B.C.) to remove the treasures from the Jewish temple. The king called for the appointment of overseers in various provinces, including Judea.

Some critics say that Jesus quoted or referred to the Apocrypha or Pseudepigrapha.[15]  They imply that He borrowed ideas from those writers, and therefore, His teaching was not of divine inspiration. The question is to explain how some of these books, written years before His birth, have similarities to what He taught.

What Jesus taught was based solidly upon the Old Testament and many themes were also taught by rabbis in the Inter-Testamental Period, especially with the advent of Hellenism. Therefore, some topics naturally are found in the works of many orthodox Jewish rabbis, including Jesus.

Furthermore, it must be realized that even in pagan communities there were some social principles that were godly. For example, the Chinese sage Confucius presented the Golden Rule[16] in the negative form, as did the Jewish sage Tobit long before Jesus arrived in Bethlehem.  This most certainly does not mean that Jesus derived His opinions from either source, but it does indicate that these men were aware, to some degree, of divine principles.  The fact that there is a similarity does not mean Jesus endorsed them or relied on them.  He was, and is, God.  His Words have existed throughout all eternity past.

Two examples below supposedly “prove” that Jesus depended upon the Apocrypha in His teaching:[17]

This is parallel to:

Ben Sirach 23:9 Do not accustom your mouth to oaths, nor habitually utter the name of the Holy One.

Mt. 7:12 Therefore, whatever you want others to do for you, do also the same for them—this is the Law and the Prophets.

This is parallel to, but in reverse of:

These examples in Ben Sirach and Tobit are similar to the words of Jesus because He and other rabbis had a similar sense of righteousness based upon the Hebrew Bible. It should not surprise the modern student that righteous Jews thought very much like Jesus.

Finally, as a word of warning, it should be noted that many myths and legends throughout the centuries are attributed to extra-biblical books. Creative writers and painters have attempted to enhance the holiness and miracles of Jesus. Several examples are as follows:

Biblical myths were created throughout history, but increased significantly in Europe during the Middle Ages. There is hardly a museum or library in Europe that does not have one or two so-called “true stories” of the Bible hidden somewhere in its archives that have recently been promoted as a recently discovered insight.[18] They all point to the fulfillment of the prophetic words of Jesus in His Olivet Discourse (Mt. 24), when He warned that false teachers would arise.

The redeeming quality of these writings is that, by contrast, they are astonishing proof that the biblical gospels were produced by authors who were guided by the Holy Spirit.  It is obvious that no creative mind can enhance the Sacred Script without degrading or distorting it. While creative writers and painters attempted to honor Jesus, their fanciful stories tend to dishonor and misinterpret Him.

[5]. The Roman Catholic Church, as late as 1546, embraced the Apocrypha as Scripture at the Council of Trent.

[11]. The book of Daniel was written by the prophet of the same name, after he and many others were taken captive into Babylon in 605 B.C. However, critics maintain that since it is apocalyptic and prophetic in nature, it must have been written after 170 B.C. as a historical description of the horrors unleashed by Antiochus IV Epiphanes. The Revelation was written in A.D. 95 by John.

[15] Jesus is not the only One who quoted or made reference to non-biblical sources. For further study in apologetics, see http://www.ask.com/wiki/Assumption_of_Moses?o=2800&qsrc=999&ad=doubleDown&an=apn&ap=ask.com. See also http://www.apologeticspress.org/apcontent.aspx?category=13&article=1179 Retrieved April 5, 2015.

[17]. Quotations from the Apocrypha found in the Bible: The New Revised Standard Version with Apocrypha.

[18]. Two examples are: 1) Ron Charles, who has gathered scores of fanciful legends and myths, mostly written between the sixth and sixteenth centuries, that pertain to the life of Christ in his book titled, The Search: A Historian’s Search for Historical Jesus. (Self-Published, 2007). 2) Nicholas Notovich, whose book,  The Unknown Life of Jesus Christ. Trans. (Virchand R. Gandhi, Dover Pub.) is a so-called historical account of when Jesus went to Asia to study between the ages 13 and 29.