02.01.16 Sadducees. The Sadducees appeared on the scene after the elimination of the Greek Antiochus IV Epiphanes from power in Israel (ten northern tribes) and Judea (two southern tribes). They were the descendants of the Hasmonean rulers who ruled Judea (163 – 63 B.C.) after the Maccabean revolt.  Members of this religious sect were, in fact, the ruling aristocratic political-religious party in Jerusalem and close friends of the Herodian family and the Romans. They held prominent positions in the city. More importantly, they controlled the Sanhedrin and the temple.[1]  It was through this political relationship that they were able to attain control of the Sanhedrin, the temple, the priesthood, throughout the life of Christ until the Romans destroyed them in A.D. 70.[2] Control of the temple afforded them an incredibly lavish lifestyle, unimaginable even for ancient times as shown by the glass artifact shown below (02.01.16.A).

The origin of the name “Sadducee” is somewhat mysterious.  The once-held belief that the name was derived from Zadok, a high priest in Solomon’s court has some serious etymological[3] difficulties.[4] Recent scholarship suggests that the name could refer to the “righteous ones” because it emphasizes religious purity and because the Sadducees are direct descendants of the Hasmoneans.  Some scholars believe the name “Boethusians” was just another name for a group within the Sadducees (Acts 4:1; 23:12-14), because the House of Boethus was a highly influential family.[5] These two opinions could very well be in agreement with each other, as at times specific details are less clear than is desired. Nonetheless, they were ruthless and did whatever was necessary to protect their position and status.[6] The Essenes referred to them as the “wicked priests” in their Dead Sea Scrolls.[7] There are five major aspects to the powerful Sadducees:[8] 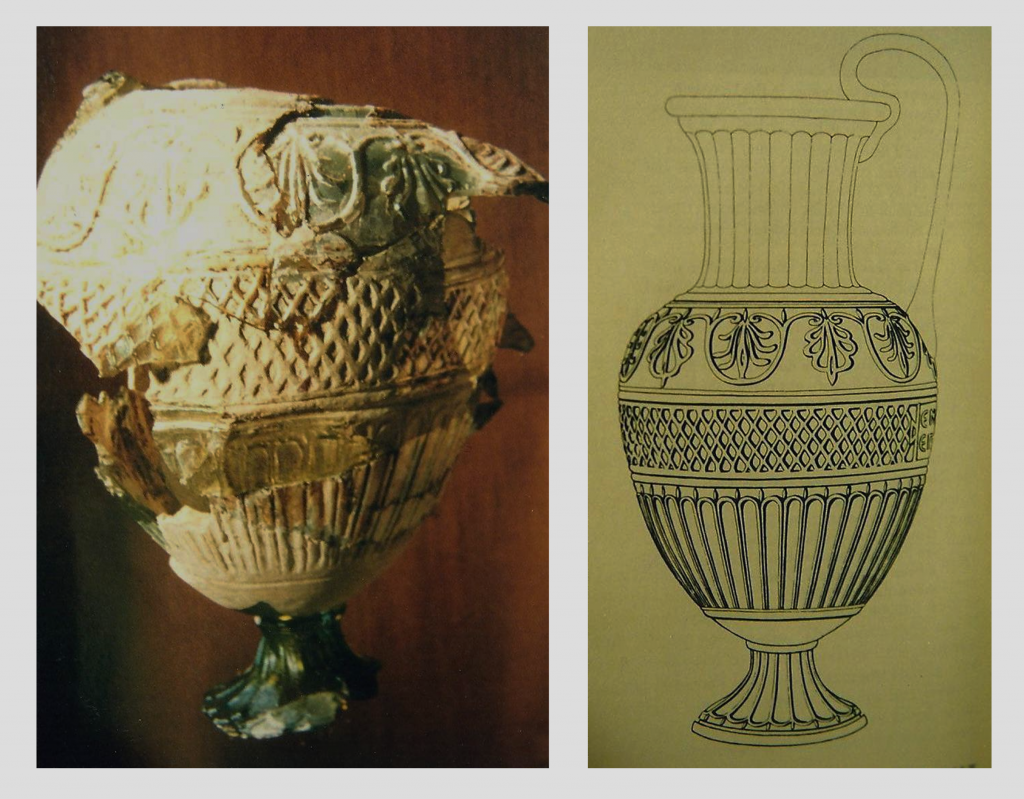 02.01.16.A. AN EXAMPLE OF SADDUCEAN EXTRAVAGANCE.  LEFT: A partially melted glass pitcher of exquisite design and craftsmanship was found in the burned ruins of the home of a Sadducean priest. Molded glass jug signed by Ennion, probably of Sidon.   RIGHT: The recreated drawing of the pitcher as in its original design: dark lines reflect actual remains and the light lines are of the upper portion. This was obviously owned by one of Jerusalem’s wealthiest families.  Photograph and illustration courtesy of the Israel Museum.

Regardless of the evil passion of many in the temple, it should be noted that many Levites, priests, and chief priests were godly men, and not members of the Sadducees or corrupted leading Pharisees. Josephus summarized the leading Pharisees and Sadducees as follows:

Of the first named schools, the Pharisees, who are considered to be most accurate interpreters of the laws, and hold the position of the leading sect, attribute everything to fate and God; they hold that to act rightly or otherwise rest, indeed, for the most part with men, but that in each action fate cooperates.  Every soul, they maintain, is perishable, but the soul of the good alone passes into another body, while the soul of the wicked suffer eternal punishment.

The Sadducees, the second of the orders, do away with fate together, and remove God beyond, not merely the commission, but the very sight of evil.  They maintain that man has the free choice of good and evil, and that it rests with each man’s will whether he follows the one or the other. As for the persistence of the soul after death, penalties in the underworld, and rewards, they will have none of them.

The Pharisees are affectionate to each other and cultivate harmonious relations with the community.  The Sadducees, on the contrary, are, even among themselves, rather boorish in their behavior, and in their intercourse with their peers are as rude as to aliens.  Such is what I have to say on the Jewish philosophical schools.

Concerning the Sadducees and their belief in the resurrection, the historian said,

But the doctrine of the Sadducees is this: That souls die with the bodies; nor do they regard the observation of anything besides what the law enjoins them, for they think it an instance of virtue to dispute with those teachers of philosophy whom they frequent.

The family clan of Annas was extremely greedy and wealthy. They were the envy of those who achieved the “lifestyles of the rich and famous,” as expressed in modern terms. As priests of the temple, they had afforded themselves a lifestyle beyond the imaginations of both the common people and modern scholarship.  Annas, who was a Sadducee, converted the Gentile Court of the temple into a commercial market of animal sales, moneychangers, and pedestrian traffic, but Jesus had something to say about it.

By cleansing this area of the temple, Jesus demonstrated His Messianic authority, to which neither the Romans nor the Sadducees offered a strong challenge. The reason was that the cleansing was not so much an act of reformation or purification, but a symbolic gesture of pending judgment.  In doing this, He not only displayed His divine intention, but also confirmed the words of judgment spoken by the Old Testament prophets.[16] The prophetic act that symbolized destruction was also reflective in Jeremiah 4:5-5:31; 7:14; 25:1-38; 26:1-24; Ezekiel 4:1-7:27; and Micah 3:9-12. Witnesses would have connected the cleansing with these prophets.

02.01.16.B. SADDUCEAN TOMB INSCRIPTION. A tomb inscription of a first century A.D. Sadducee that reads, Enjoy your life. Illustration courtesy of the Israel Museum.

There was an anti-Gentile attitude in some Jewish circles. The attitude was that since they were God’s chosen elite, all other people were as spittle. This is reflected in the Pseudepigrapha book of 4 Ezra. It reads as follows:

All this I have spoken before you, O Lord, because you have said that it was for us that you created this world.  As for the other nations, which have descended from Adam, you have said they are nothing, and that they are like spittle, and you have compared their abundance to a drop from a bucket.  And now, O Lord, behold, these nations, which are reputed as nothing, domineer over us and devour us.  But we your people, whom you have called your firstborn, only begotten, zealous for you, and most dear, have been given into their hands.

Being a Sadducee was not necessarily an easy task, regardless how much power the Sadducees had in controlling the temple and being Roman pawns.  The fact remained that all temple services were at the direction of the Pharisees.  Most certainly the Sadducees were not very delighted with having the Pharisees tell them what to do and when to do it. The politics and in-house squabbling within the temple was phenomenal and often escapes modern scholarship. There was constant bickering and rivalry, not to mention a long history of animosity between the two religious groups.[18]

An important aspect to note is that the Sadducees were extremely rigid in judging others. In fact, they even had their own penal code.[19] That is precisely how Josephus described them. Speaking of Ananus, a/k/a Annas, he,

Took the high priesthood, was a bold man in his temper, and very insolent; he was also of the sect of the Sadducees, who are very rigid in judging offenders, above all the rest of the Jews.

Similar words were written about three or four decades before Jesus was born by an unknown author who said,

Why are you sitting in the council of the devout, you profaner?

And your heart is far from the Lord,

Provoking the God of Israel by lawbreaking;

He who is harsh in words in condemning sinners at judgment.

Clearly, the Sadducees had a well established reputation of corruption. They were the primary instigators and final actors to have the Romans crucify Jesus. In summary, the theological and social positions of the Sadducees (compare to 02.01.14 “Pharisees”) were,[20]

Therefore, not only did the Sadducees not believe in an eternity, but in doing so, they denied any messianic hope.  That, coupled with their Hellenistic ideals and lifestyle, explains why they sought to destroy the work of Jesus by whatever means possible and were the major oppressors of the early church.[27] They were arrogant and rude to Jews of other sects and, as Josephus said, to foreigners who came to Jerusalem.[28]  When Jesus was before Pilate, it was they who cried, “Let His blood be upon us and our children.” Their wish came true because the Romans killed every one of them with the destruction of the temple in A.D. 70.

[9]. Visitors in Jerusalem today can see one of the homes of the Sadducees at the Wohl Archeological Museum. These opulent homes, known today as the Herodian Mansions, are located a short walk from the Western Wall.

[17]. Scholars debate on the classification of 3rd Ezra (a/k/a 1 Esdras) and 4th Ezra (a/k/a 2nd Esdras). Sometimes these are listed in the Apocrypha (see 02.02.03) and other times they are listed in the Pseudepigrapha (see 02.02.24). The reader is reminded that quotations from non-biblical sources are not to be understood as being of equal authority with the biblical narratives. See 01.02.04.